I TOOK A RARE TUMBLE ON BAYFIELD'S WOODLAND TRAIL THIS MORNING 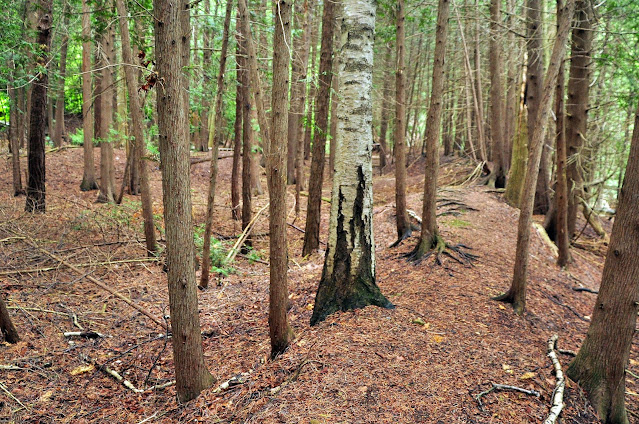 Just asleep late Thursday night and 'ka-boom'...thunder!!  Asleep again for a while and 'ka-blamosplasho'...rain pounding on our steel roof.  With that thunder and rain came much warmer temperatures and instead of waking up to temps in the low 40s today I opened the patio door right beside my living room recliner to a cloudy 72F morning, and that was quite alright with me as long as the temperature stayed there and didn't go gallivanting off into the upper '70s and '80s somewhere!!  A mad dash to the Jeep through the raindrops and Pheebs and I were off.  Knowing country roads would be a soggy mess we stayed on pavement taking a drive into and around Bayfield. 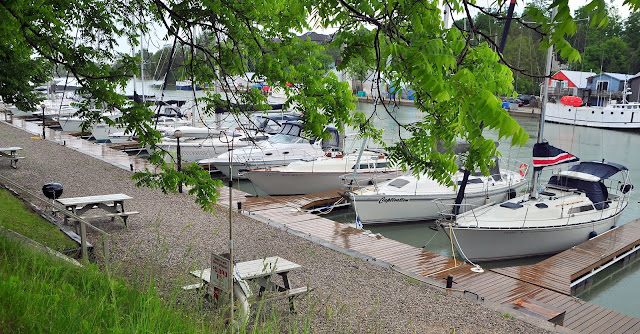 I was happy to see a large crane being set up at the new Bayfield Bridge site.  After the construction site sitting relatively idle for the past couple months, I'm hoping this crane is here to begin lifting and installing the heavy steel bridge beams. 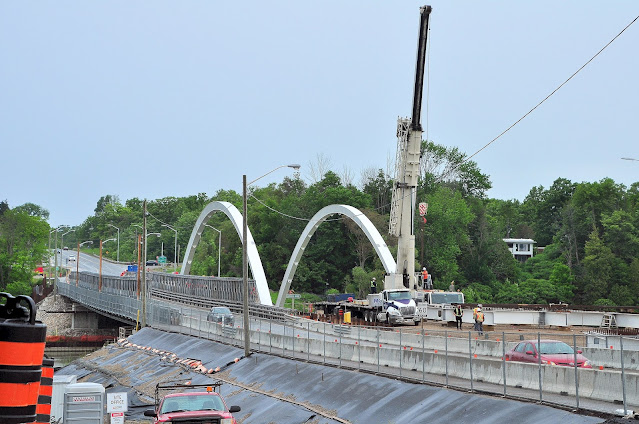 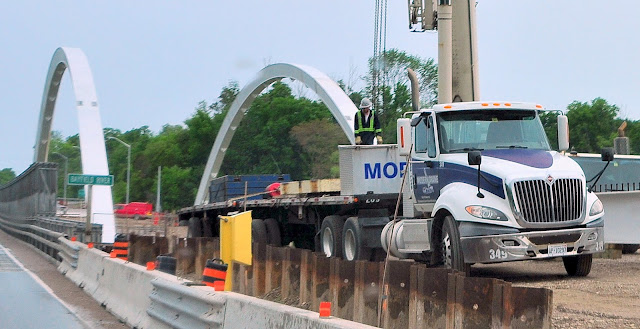 Despite the rain, we stopped at Bayfield's Woodland Trail and took ourselves for a short walk under the protective canopy of a cedar forest.  And this is where I took a rare tumble.  I was careful on the slippery boardwalk but stepping off the trail at the top of a steep descending wooden staircase I failed to notice a few wet and slanted cedar tree roots on the ground's surface.  I was upside down flat on my back in less than a second.  My priority on my instant descent to the ground was my camera and I instinctively tucked my wrist and arm into my already tucking-in body and the camera didn't impact with the ground.  The last time I took a rolling tumble like this was 3 or 4 years ago in Goderich's doggy walking area when I misjudged, then stepped on a slanted piece of icy concrete at the water's edge and ended up on my back with parts of me slightly submerged in Lake Huron. 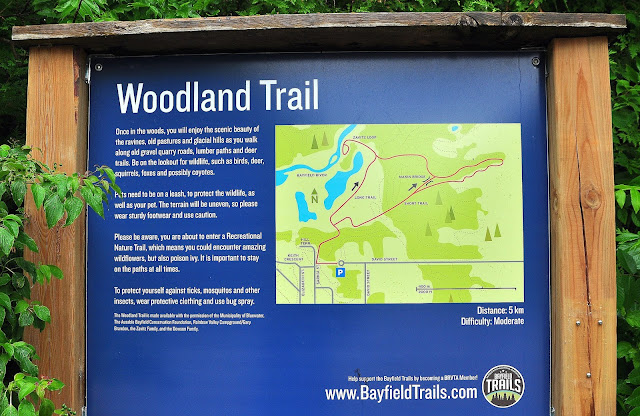 This is a really great trail within the town limits of Bayfield.  Pheebs and I hiked it a few years ago and followed it all the way to the Bayfield River below.  This trail winds its way descending into a steep ravine with a set of old wooden stairs twisting their way down through the pine and cedar trees.  Instead of heading down the steps, I decided to turn right and head off along the ravine's edge.  (This is when I took the tumble) 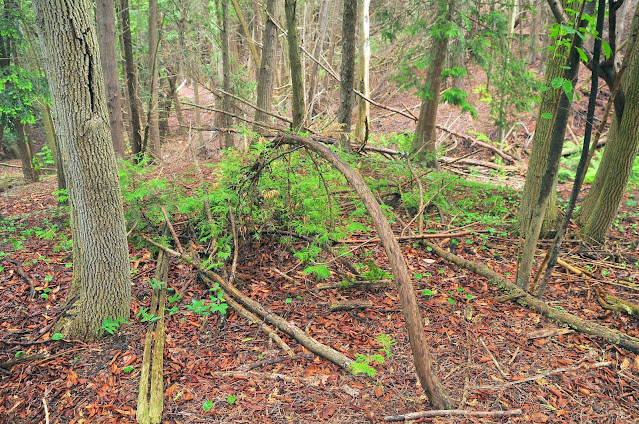 We had only gone a short distance when I noticed some kind of a partial structure ahead.  Judging from a few old beer cans lying around I knew it was something a group of teenagers had put together at some point in the past.  Took a few pics and we turned around and headed back to the trail and the Jeep.  We were home five minutes later.  Sunshine finally burst through the heavy cloud cover shortly after high noon and remained for about four hours before clouds moved back into the area.  And then the sun peeked through again later.  I missed my calling as a weatherman I guess. 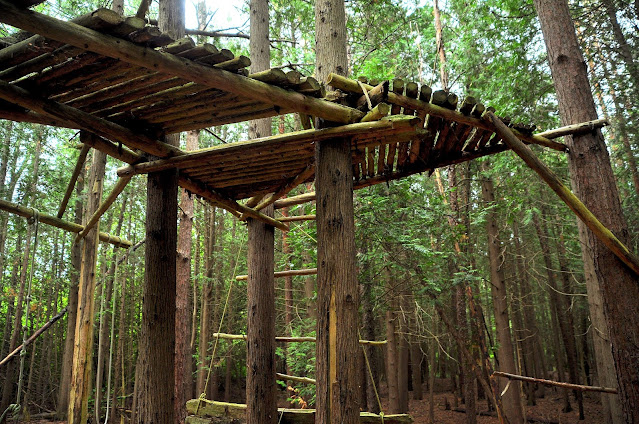 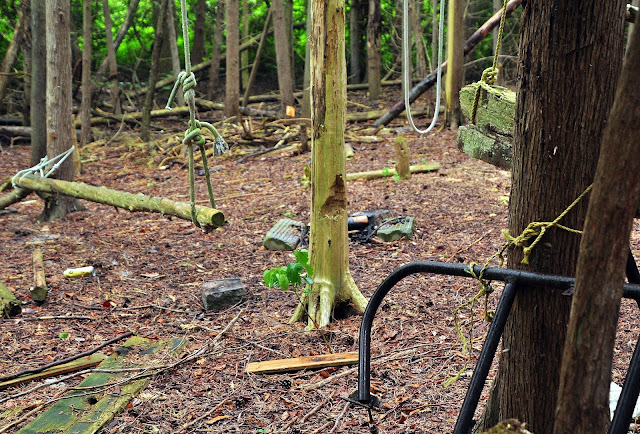 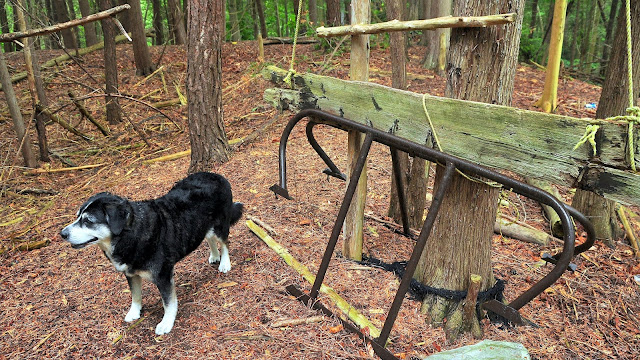 Canada has delayed opening the border with the U.S. for yet another month so it looks like the talking heads will once again discuss the opening in mid-July. 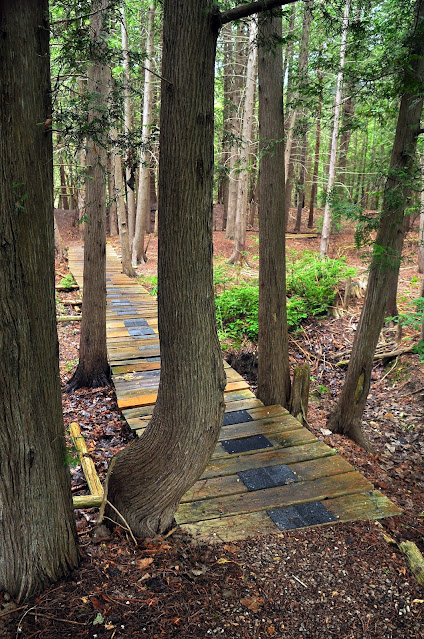 GROANER'S CORNER:((  One day, a blonde guy's neighbor goes over to his house, sees the guy crying, and asks him what happened.  The guy said that his mother had passed away.  The neighbor made him some coffee and calmed him down a little and then left.  The next day the neighbor went back over to the house and found the man crying again.  She asked him why he was crying this time.  The blonde guy said, "I just got off of the phone with my sister. Her mother died too!"--------------------------------------

A wife chewed out her husband at the company picnic a while back. "Doesn't it embarrass you that people have seen you go up to the buffet table five times?"  "Not a bit," the husband replied. "I just tell them I'm filling up the plate for you." 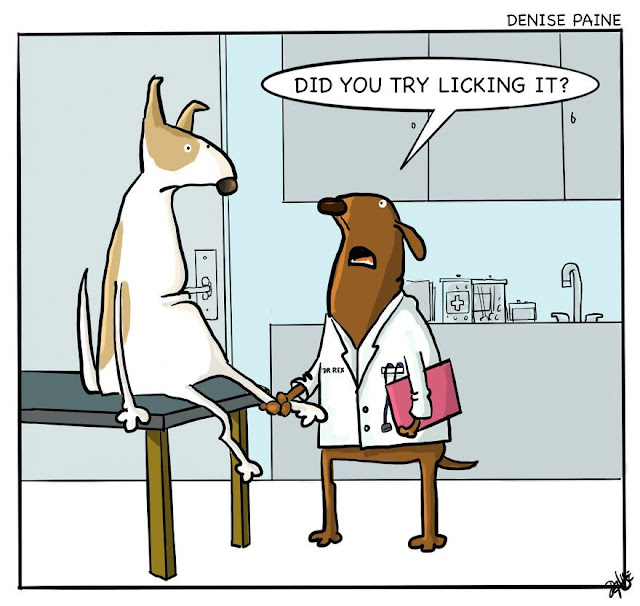