Another overnight dump of snow but at least for a few minutes this morning we saw a golden sunrise through the pine trees.  By the time Pheebs and I had the Jeep's wheels rolling, skies had pretty much clouded over again.Roads were covered but it was only about half an inch of lite fluffy stuff and easy to drive through. Being Sunday morning there wasn't much traffic around but we did see one car that had gone off the road into the ditch.  Probably happened in the night when it was snowing. 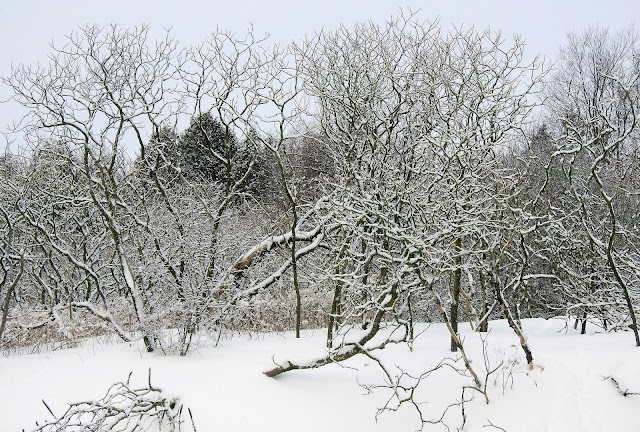 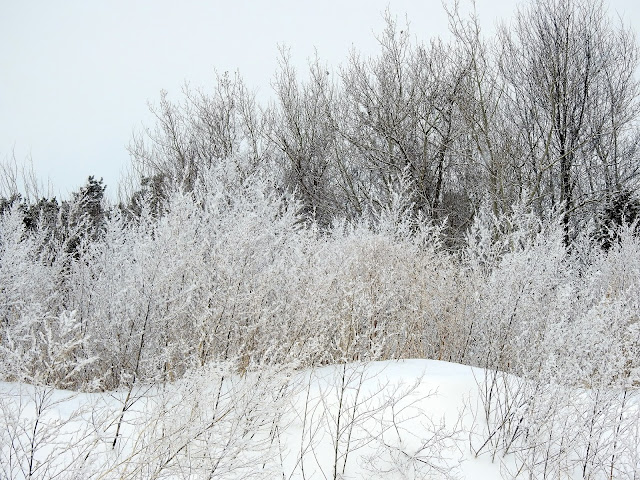 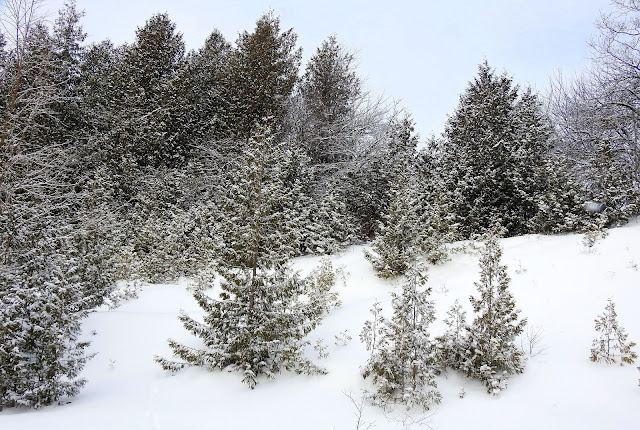 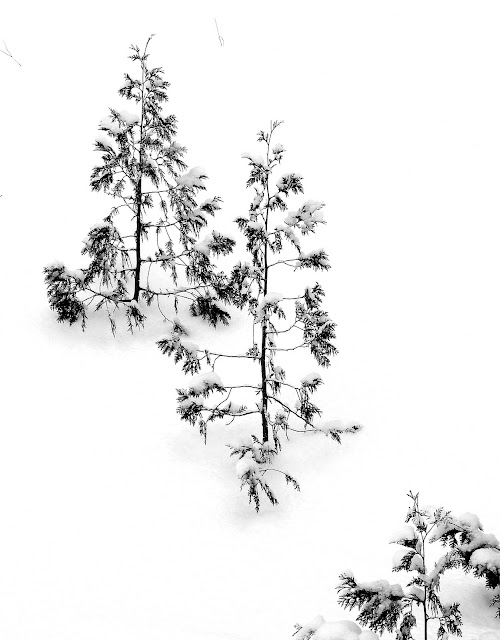 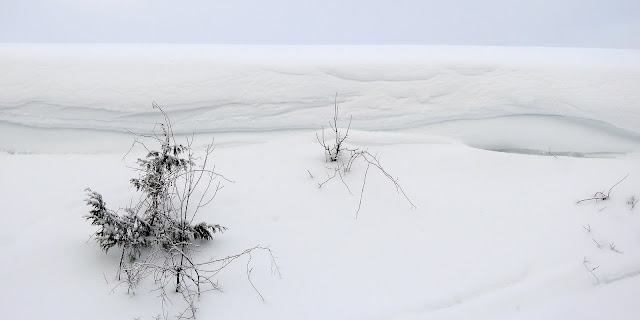 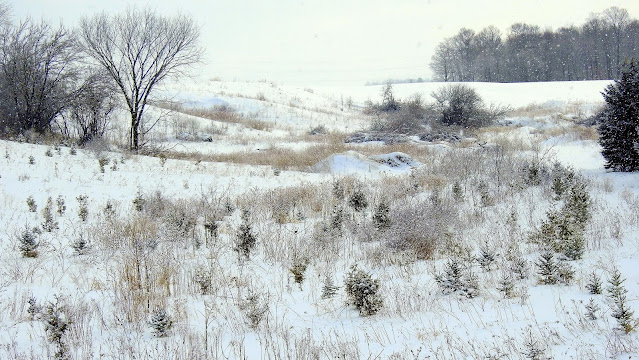 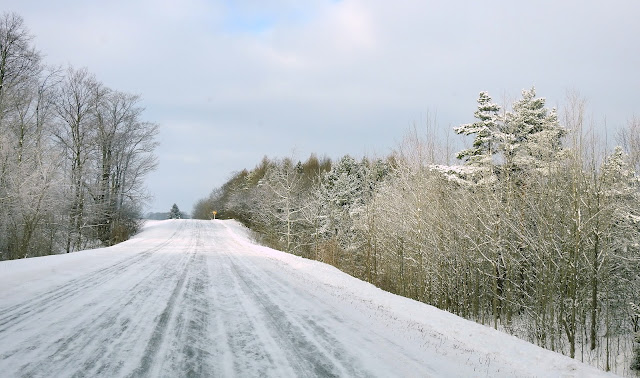 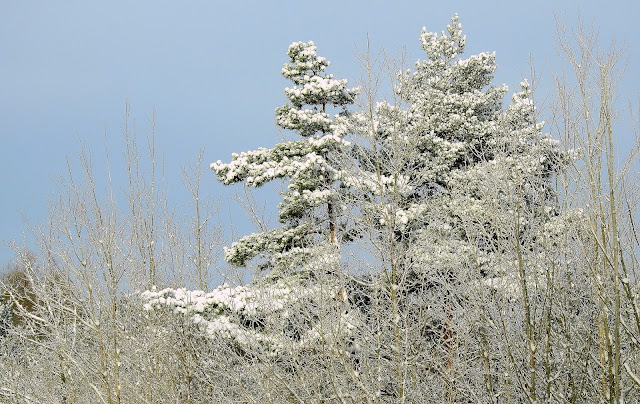 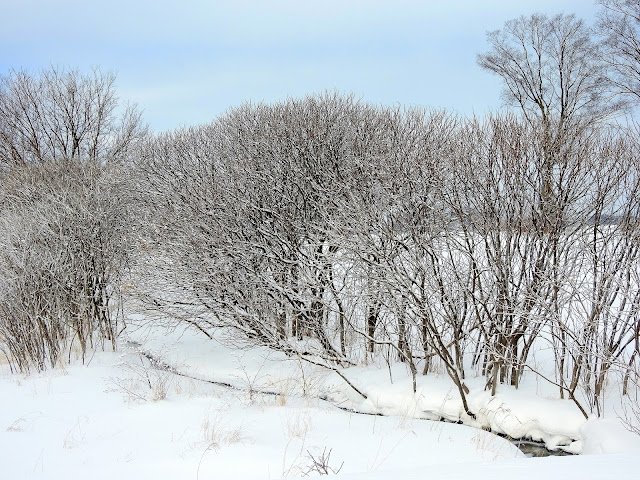 Our travels took us to Goderich for a swing down around the harbor and a few things at Walmart.  Wasn't long and we were on our way home again. 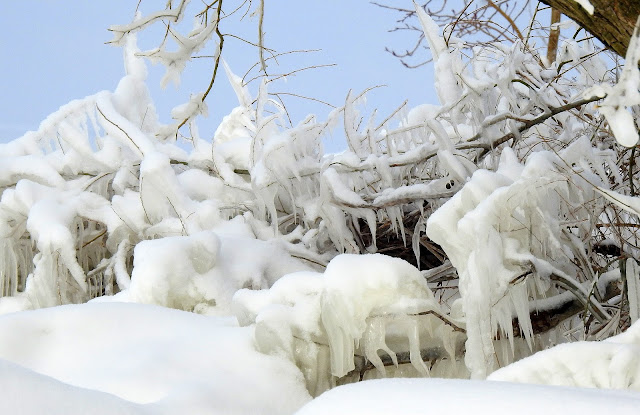 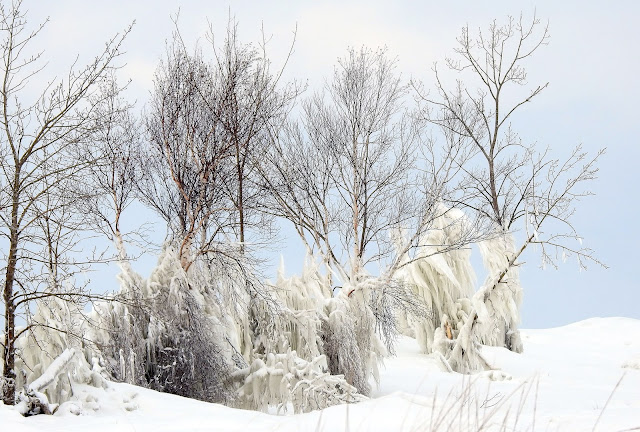 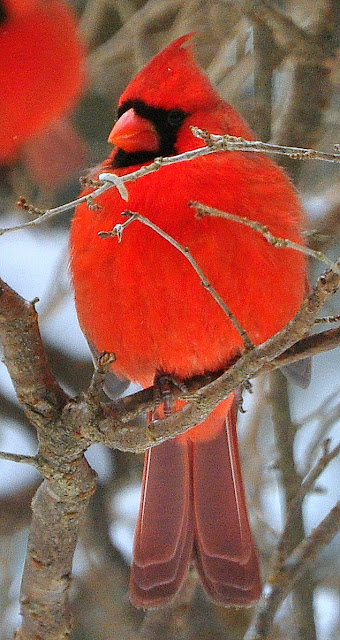 Spent some time on the end of my snow shovel of course and finished removing the last of the deep snow on our Motorhome's roof.  There is a thin layer of ice on the roof itself and that will just have to melt off in due time.  If our 14-day weather forecast holds true that should be the week after this coming week where I see temps for 5 days in a row ranging from 32 to 36F:)) 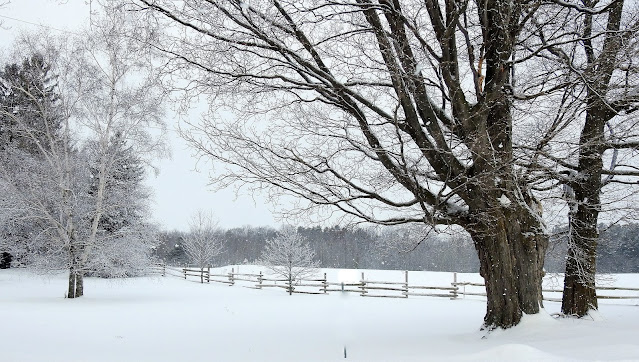 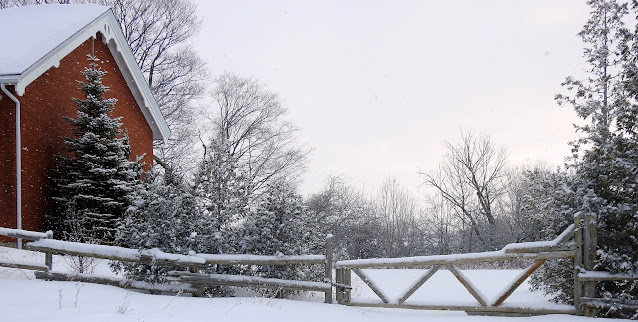 Late this afternoon glancing up from my computer I saw three Cardinals (1 female & 2 males) close together in a small tree.  Knowing I only had seconds to get off a few shots of them before they all split I grabbed a nearby camera.  The shots aren't the best but at least I got some images...... 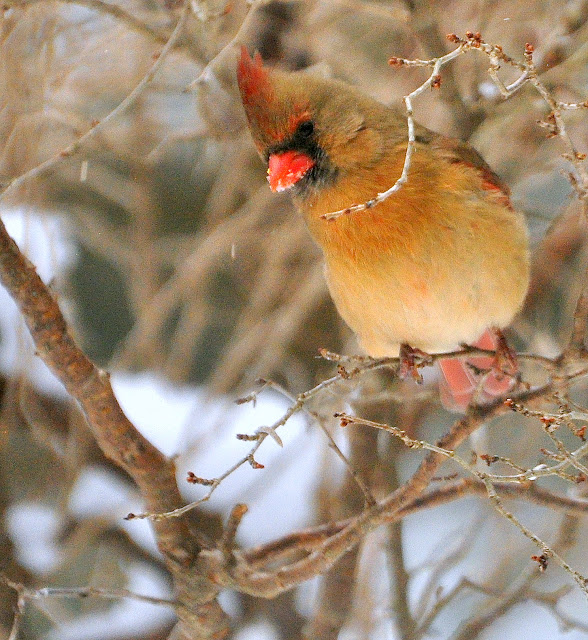 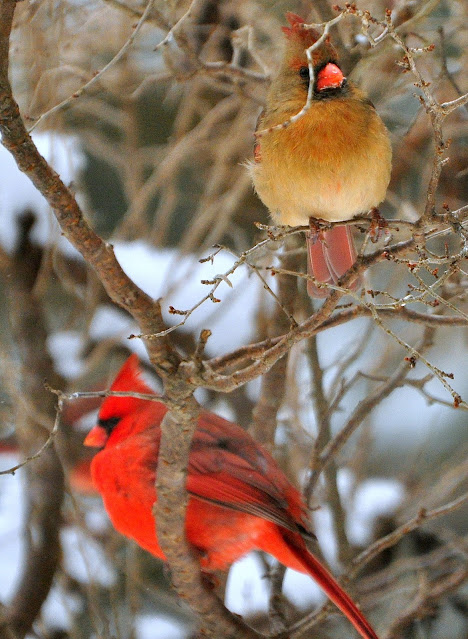 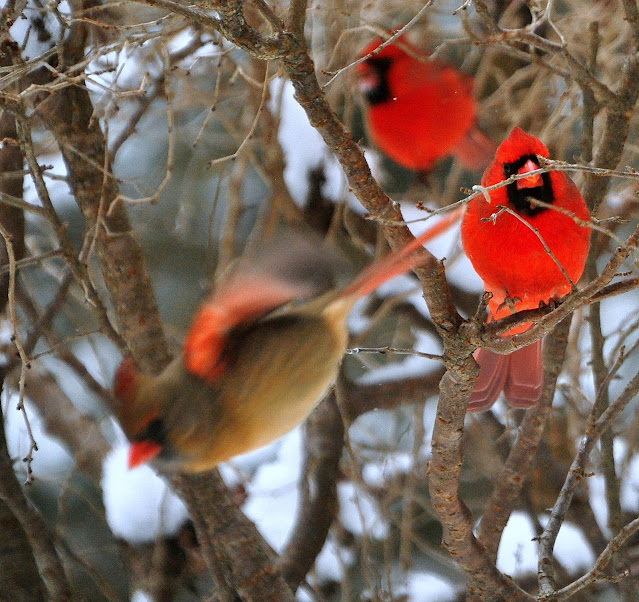 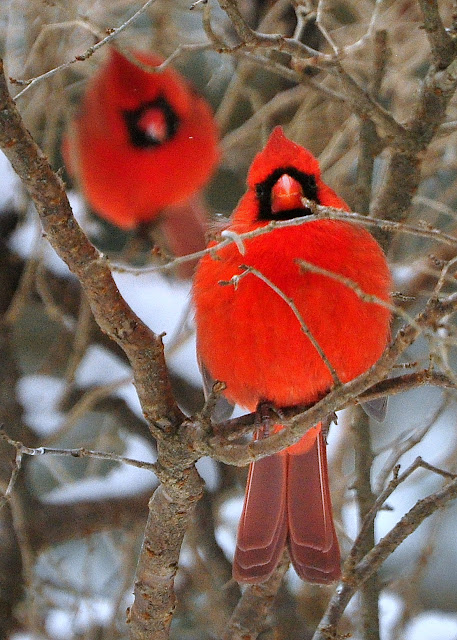 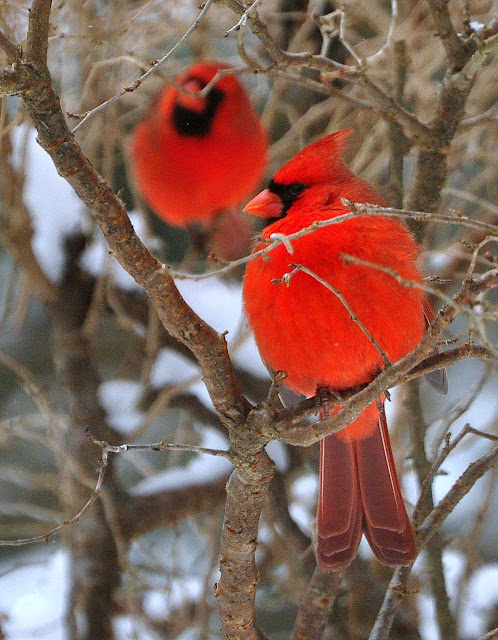 Having just written the above paragraph late this afternoon I now see on tonight's weather news a heavy snowfall with accompanying winds is headed our way overnight and predicted to last into Tuesday.  Snow and wind mean one thing....Winter Storm!! GROANER'S CORNER:((     Harry Truman was known for his blunt manner of speaking. When he made a speech at the Washington Garden Club, he kept referring to the "good manure" that needed to be used on the flowers.  Some society women complained to his wife, Bess. "Couldn't you get the President to say 'fertilizer'?" they asked.  Mrs. Truman replied, "Heavens, no! It took me twenty-five years to get him to say 'manure.'"

AN elderly man lived alone in the Irish countryside with only a pet dog for company. One day the dog died, and he went to the parish priest and asked if he would say a mass for his poor departed pet. The priest replied: "I'm afraid not; we cannot have services for an animal in the church. But there are some Baptists down the lane."  "I'll go right away Father," the man replied. "Do ya think $5000 is enough to donate to them for the service?""Sweet Mary, Mother of Jesus! Why didn't ya tell me the dog was Catholic?" the priest exclaimed. 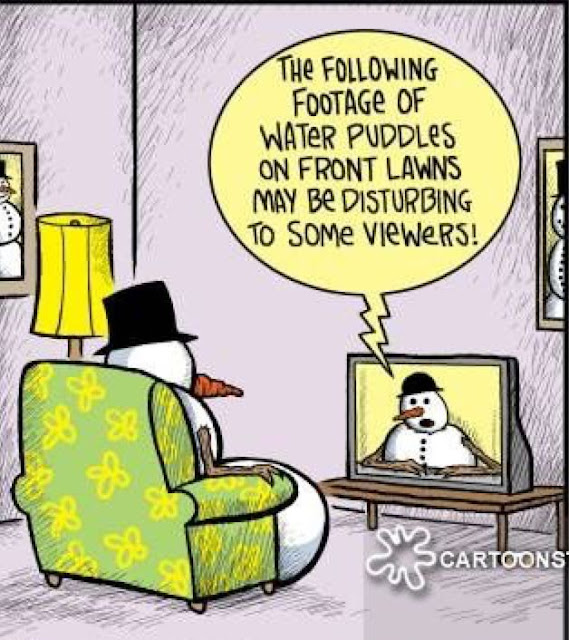 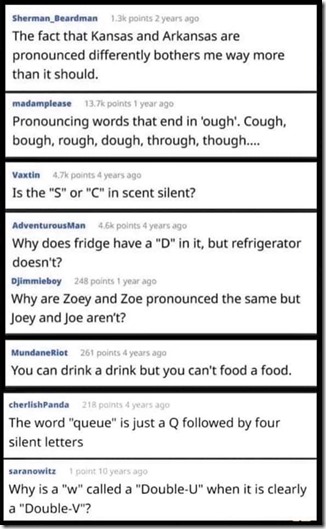