THE FISHING BOAT RESCUE WORKED AND IT IS UPRIGHT AGAIN

Well if you read my Sunday post you will already know where Pheebs and I headed this morning.  Yes, at 9:15 we were down at the Bayfield harbor.  The partially submerged fishing boat tied to the wharf in the Bayfield River was still there and I suspect more than ever that its starboard (right) side was resting on the river bottom.  I could see a small cluster of men with one of them breaking the ice around the stern with a pole.  No sign of any heavy equipment on scene.  Pheebs and I continued our short Jeep ride around Bayfield before heading home again.  Figured I'd come back and check on the fishing boat progress later.
Back to the Bayfield Harbor at 11:30, I noticed they had a diver in the water around the stern section.  Two fellas in a rowboat were at the bow trying to get a deck hatch open with an axe and a crowbar.  They did get it open. 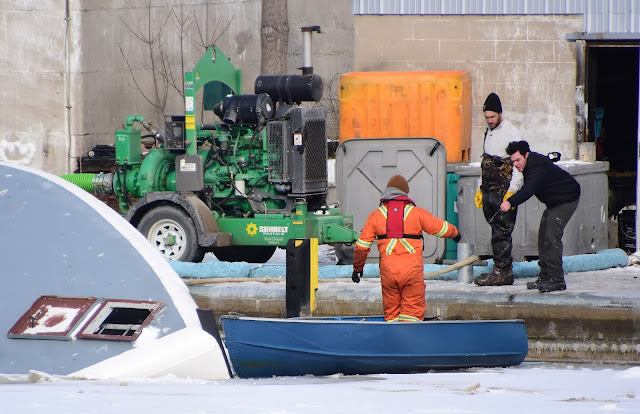 1:30 p.m. it was back down to the harbor.  Diver was out of the water and I saw 3 large green industrial diesel water pump machines sitting on the dock ready to go.  The fishing boat was still tipped to it's right side.
3:30 p.m.  Back down to the harbor.  Two big mobile cranes had been brought in with one ahead of the boat and one behind.  Took them a while to get the rear crane positioned but soon the lift was slowly underway. 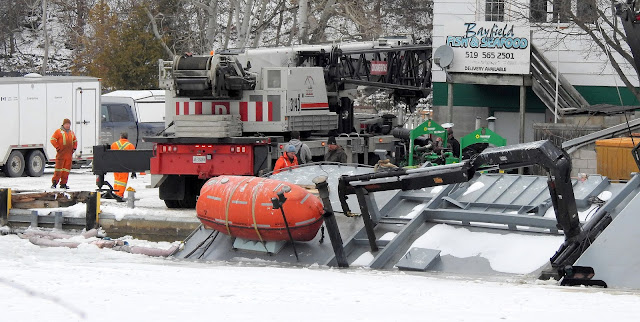 One of the big water pumps began pumping water out of the boat and it was 4:40 p.m. when the cranes slowly began their lift.  Immediately I could see movement around the frozen water line of the boat as it began to inch its way back up to a steadier keel. 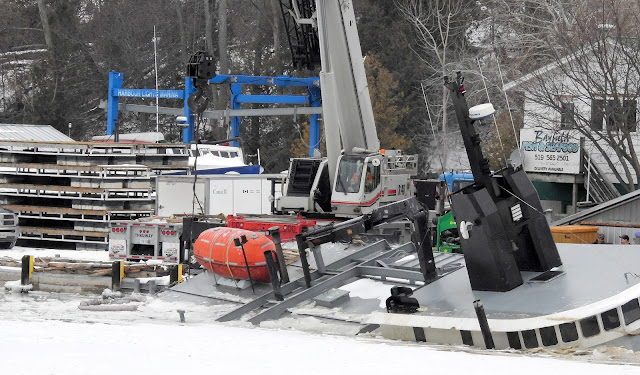 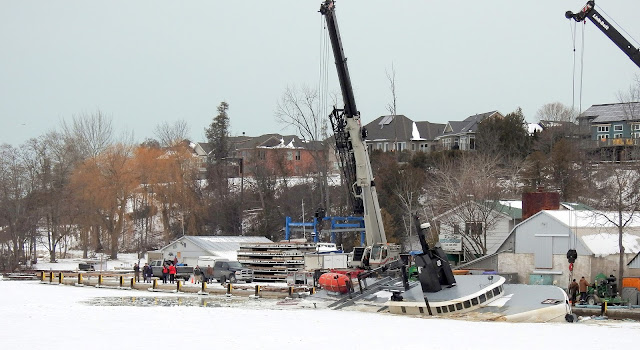 Daylight was fading and the cranes had momentarily stopped the lift.  Don't know what their next step is but I will be anxious to see how they are making out tomorrow when Kelly, Pheebs, and I get back from London's University Hospital.  Kelly's ultra-sound is at 9:30 a.m. and we should be home before noon depending on the weather.  The forecast is calling for snow. 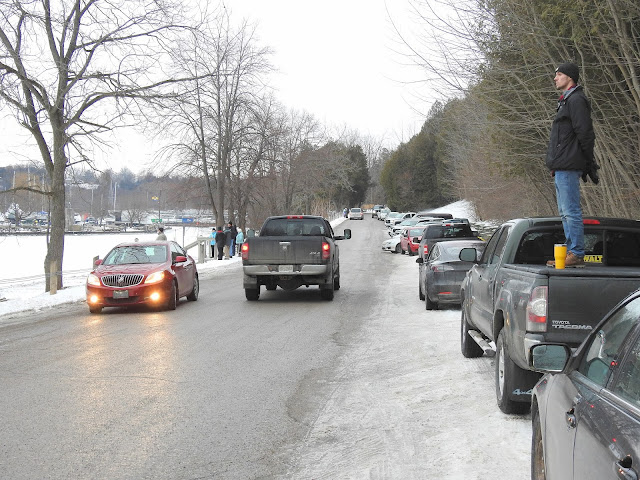 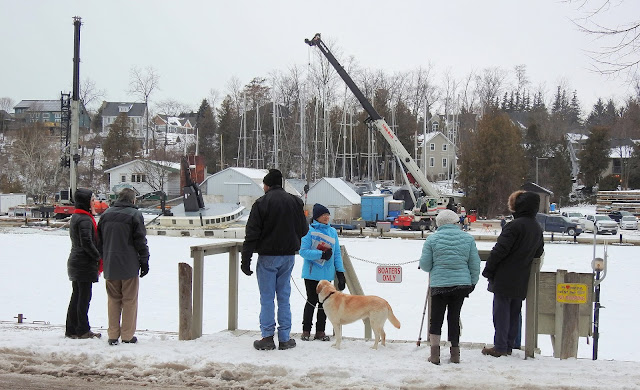 GROANER'S CORNER:((  Ronald and his wife were cleaning out the attic one day when he came across a ticket from the local shoe repair shop. The date stamped on the ticket showed that it was over eleven years old. They both laughed and tried to remember which of them might have forgotten to pick up a pair of shoes over a decade ago.  "Do you think the shoes will still be in the shop?" Ronald asked.  "Not very likely," his wife said.  "It's worth a try," Ronald said, pocketing the ticket.  He went downstairs, hopped into the car, and drove to the store. With a straight face, he handed the ticket to the man behind the counter. With a face just as straight, the man said, "Just a minute. I'll have to look for these." He disappeared into a dark corner at the back of the shop.  Two minutes later, the man called out, "Here they are!"  "No kidding?" Ronald called back. "That's terrific! Who would have thought they'd still be here after all this time."  The man came back to the counter, empty-handed. "They'll be ready Thursday," he said calmly. 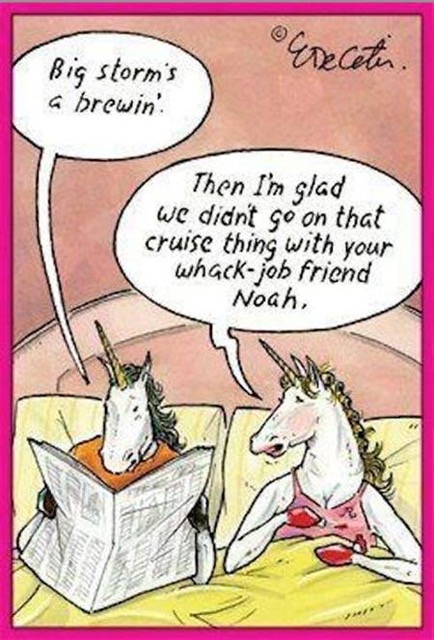