With two soakers and four wet muddy paws, Pheebs and I managed to trudge ourselves through a tangle of brushy burrs, rocks, muddy gravel, and running downhill water to nab us a few Bayfield bridge construction photos this morning.  It was touch and go on the side of a very slippery and steep embankment with my main concern being not to fall and damage my camera.  Even Pheebs was having problems navigating through a few tough spots.  By the time we got back to the Jeep, I had to spend time picking all the burrs off my coat.  Amazingly enough, Pheebs never had a single burr stuck to her. 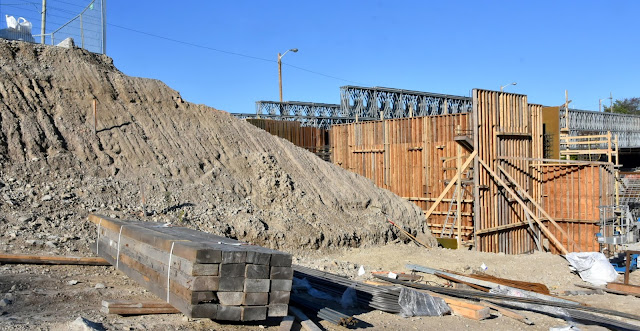 Home again around ten, Kelly and I spent our time trying to get our beloved Blue Flame propane heater going.  We bought this heater in Quartzsite Arizona back in about 2008 or 2009 and used it extensively in our Class A Damon Motorhome for about five winters in the southwest.  With a thermostat, it is far more quietly efficient and much less costly than an RV furnace.  However, our Legacy Blue Flame has sat in the shed for half a dozen years or so now and we were unable to get it going this morning.  We could get a pilot light but it wouldn't ignite the main burner.  But all is not lost because we also have a hardly used 9,000 BTU Mr. Buddy Heater.  Hasn't been fired up for years but by golly we got that one going this morning.  It uses a 1 pound green bottle propane tank (only lasts 6 hours) so we're hoping to adapt it to either a bigger tank or right into our rig's own propane system.  Our rig is already plumbed for an interior propane heater so all's we just might have to find is the right brass fittings.  Regardless, with the Mr. Buddy Heater working now we are good to go again:))I have to be at the Maitland Valley blood clinic Friday and Kelly has an appointment in Goderich Tuesday so we are kinda stymied for getting away in the Winnie-Wagon unless we can come up with something for Wednesday and Thursday.  We have our RV thinking caps on.GROANER'S CORNER:((   As a sergeant in a parachute regiment, I took part in several night time exercises. Once, I was seated next to a Lieutenant fresh from Jump School.  He was quite sad looking and a bit pale so I struck up a conversation. "Scared, Lieutenant?", I asked.  He replied, "No, just a bit apprehensive."  I asked, "What's the difference?"  He replied, "That means I'm scared with a university education." 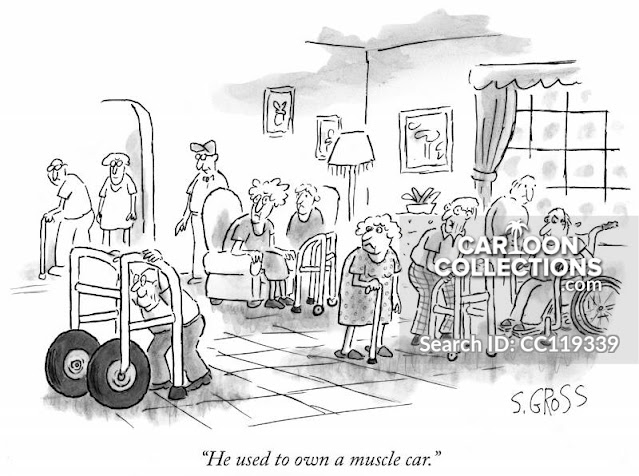 Hey Richard, this one's for you:))