Thunder boomers packing lightning and bouts of heavy rain came in the night drumming on our roof and waking up the inhabitants.  Naturally, and of course, our power went off again just long enough to screw up three indoor digital clocks and all five outside light timers.  By morning light puddles in the driveway told us a fair bit of water had fallen from the sky.  According to Rick Kaptein at Tulip Lane Farms less than a mile down the road from us, we had 5.5 inches of rain in under 4 hours.  (Rick's the guy with the Highland furry face cows) Some flooding here in our Park I hear.  And for a while after daybreak, it just kept coming and coming even as Pheebs and I took ourselves for a sloshing drive around a big country block and back home again. 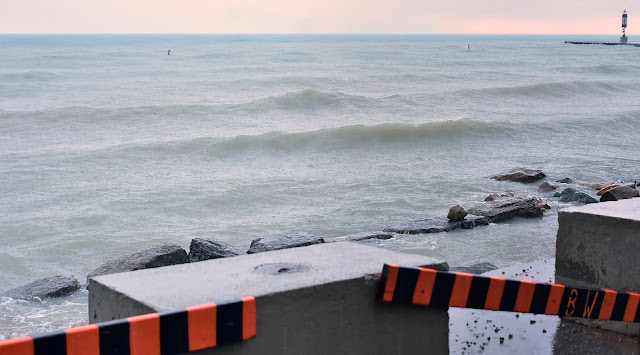 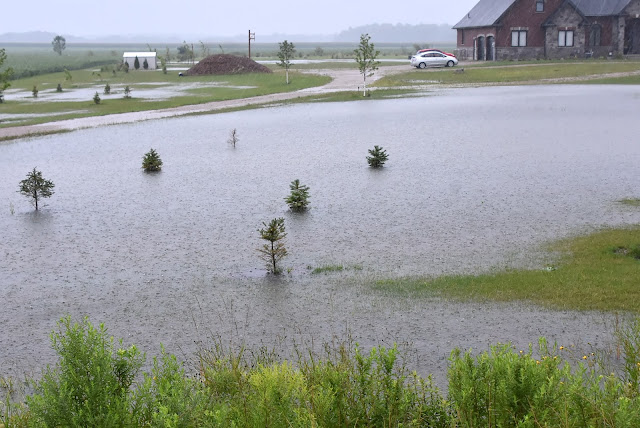 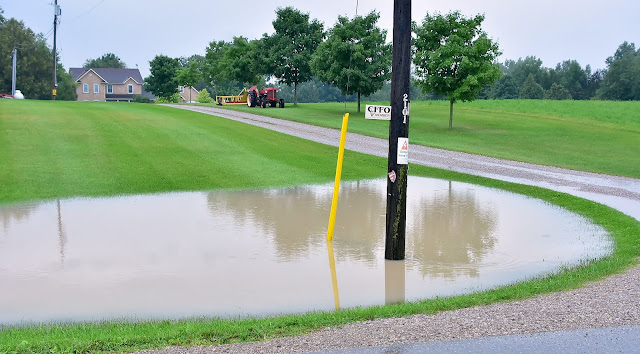 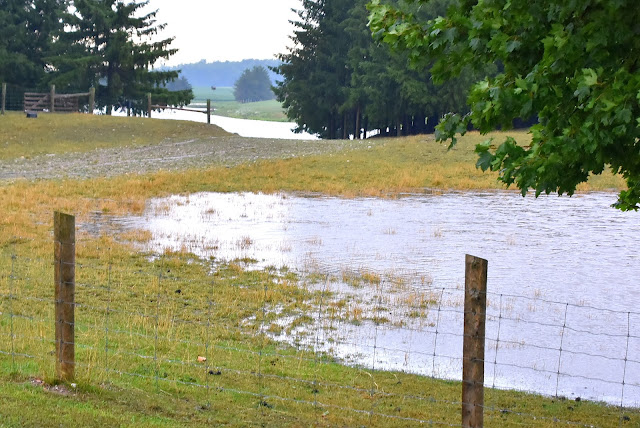 Rains finally let up about 9:30 and not wanting to waste our cooler morning air I got myself right back outside to continue with the Winniegator's waxing.   Well 'Duhhhhh', the rig was all wet from the rain so there was no waxing anything.  Now as odd as it may sound I got the water hose and dish soap out, mixed me up a pail of suds and washed and scrubbed down the whole driver's side in preparation for applying some wax later when it finally dried.  Or at least I seem to recall doing something like that anyway.  Although a lot of elbow grease goes into all this shining and polishing stuff I'm glad I have a project to work on and constructively focus my too often idle attention on.  I'm also relieved by the fact I can still physically do the work and look at the multiple trips up and down my ladder as good exercise.  Plus, for a guy, how great to have a nice vehicle to putter around with.  Of course, my putter power is limited but I do like to do what I enjoyably can.

And, regarding my Saturday post.....I totally forgot to put a link in for my good buddy Jim's blog.  You can find him at Lifetime Sentences.  He's most always got himself some clever humor going on over there.  He might have you chuckling before you even knew you were mad at yourself:)) 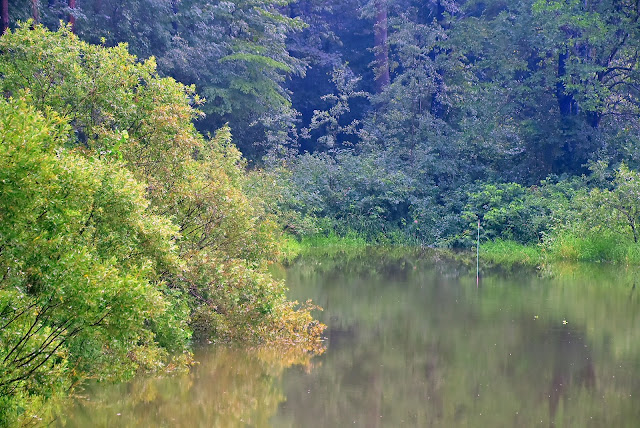 Waiting for the rig to dry I dozed off in my sunroom recliner and when I woke up an hour later around 1 p.m. the Sun was shining.  So, it was back outside again I went.  The rig was already drying off nicely and parts that weren't I squeegeed.  Kelly worked away at getting some sticky plastic privacy stuff of the side door's window.  The passenger side clean-up is 90% done, the back is about 60% done and the driver's side is about 20% done, so I've got a ways to go yet.  And I am finally seeing shiny results beginning to appear:)))) 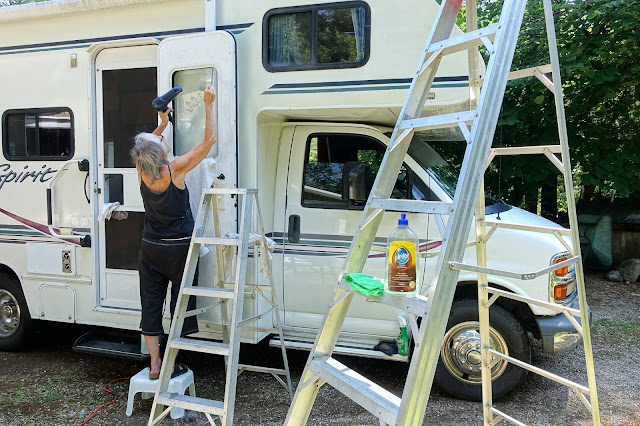 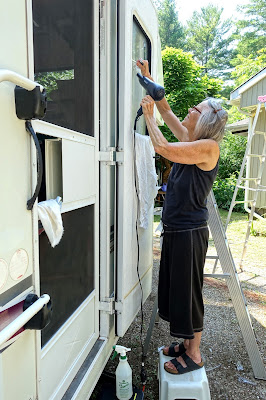 GROANER'S CORNER:((    The European Union commissioners have announced that an agreement has been reached to adopt English as the preferred language for European communications, rather than German, which was the other possibility. As part of the negotiations, the British government conceded that English spelling had some room for improvement and has accepted a five year phased plan for what will be known as EuroEnglish (Euro for short).  In the first year, "s" will be used instead of the soft "c". Sertainly, sivil servants will reseive this news with joy.  Also, the hard "c" will be replaced with "k". Not only will this klear up konfusion, but typewriters kan have one less letter.  There will be growing public enthusiasm in the sekond year, when the troublesome "ph" will be replased by "f". This will make words like "fotograf" 20 persent shorter.  In the third year, publik akseptanse of the new spelling kan be expekted to reach the stage where more komplikated changes are possible. Governments will enkorage the removal of double letters, which have always ben a deterent to akurate speling. Also, al wil agre that the horible mes of silent "e"s in the language is disgrasful, and they would go.  By the fourth year, peopl wil be reseptiv to steps such as replasing "th" by "z" and "w" by "v".  During ze fifz year, ze unesesary "o" kan be dropd from vords kontaining "ou", and similar changes vud, of kors, be aplid to ozer kombinations of leters.  Und efter ze fifz yer, ve vil al be speking German lik zey vunted in ze forst plas. 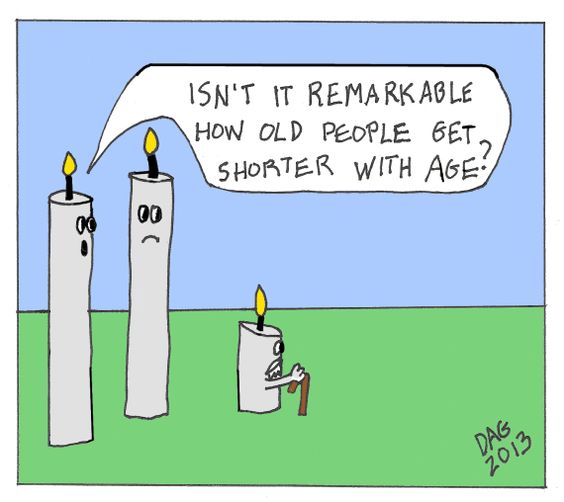