In my opinion, it was the nicest weather morning we've had this year so far.  I marveled at the refreshing coolness when I stepped out of the house into Wednesday's clear morning air.  At last, we were going to have a comfortable outside day.  Less than a minute after rolling out of our driveway we cleared our Park's encompassing forest and right away I was awestruck by the beauty of big fleecy cloud patterns against mornings early sky.   Instantly I knew Pheebs and I had a destination.  A destination that has been in the back of my mind since last winter.  It was a familiar Mennonite cemetery nearly 90 miles away and only a few miles east of my old home town of Tavistock, Ontario.  A cemetery I hadn't been to for many decades.
I have relatives and friends buried there and Aunt Jean in Florida mentioned a few months back, if I ever get down to that cemetery again could I take some tombstone photos of our past family members.  Don't know if I ever mentioned it before but my Grandmother on my Mother's side was Mennonite (Steinman) and came from the Zurich Ontario area. But there was another reason for me going to this particular cemetery and it had been on my mind for the past few months to go there as soon as we had a nice day free of heat and humidity.  Turns out, today was that day. 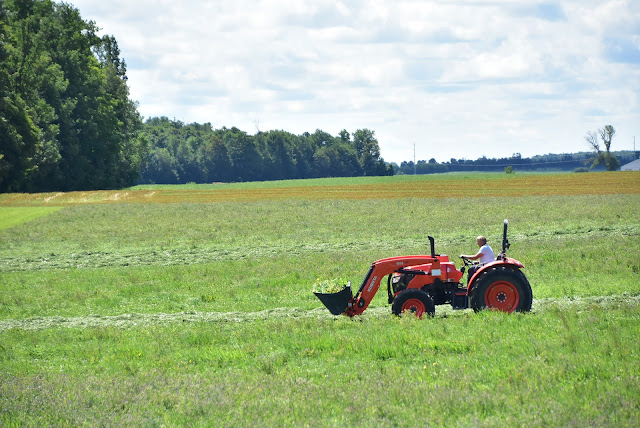 Pheebs and I were on the road shortly after 8 a.m. heading east.  Picked up some gas and coffee to go in Clinton then took a road paralleling the north side of Highway 8.  This was an old favorite route of mine back in my Stratford Airport days.  Bouncing off the northwest corner of Stratford we continued east until we reached a crossroads north of Shakespeare Ontario with a little country church on the southwest corner.  Turned right and stopped at the churchyard.  Nice spot for a Pheebs break.  We also walked over to look at a tombstone.  Some may remember my story back in 2011 called 'The Lamp'Part 1 & 'The Lamp' Part 2.  Key to the story was a kindly man by the name of Dayton Appel.  He is buried here and we dropped by to say Hello and Thankyou. 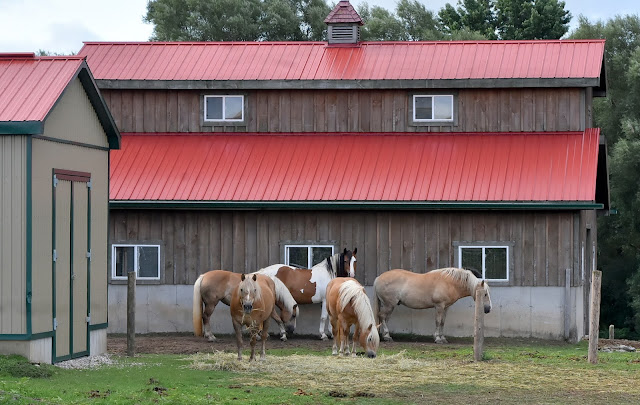 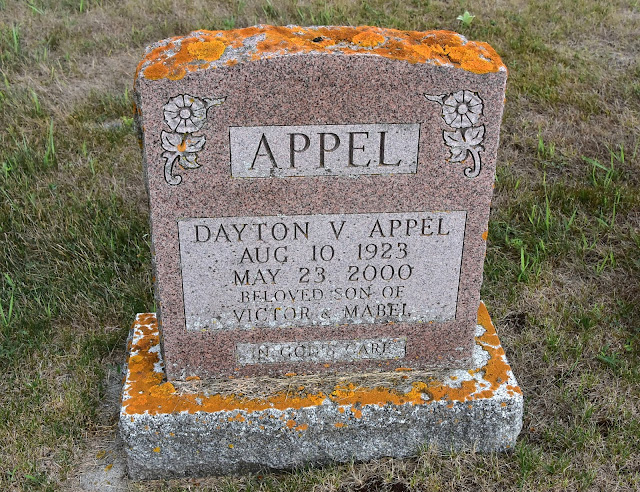 Continuing our journey south in the direction of Tavistock we skirted around the east side of town and headed for a road called the 16th line.  This whole area is where I grew up so everything was familiar to me except for how the ravages of time have altered old familiar memories.  It was shortly before 10 when we arrived at the East Zorra Mennonite Church,  The little church on a once graveled road I remembered from many years ago was much bigger now and the dusty old gravel road has turned to pavement.
With nobody around, I parked the Jeep near a pile of dirt at the southeast corner of the cemetery.  I could see right away the section where the recent internments were and I wasn't long in finding who I was looking for.  There was no tombstone there yet, only a recently poured concrete base with a last name hastily scrawled in the once fresh cement.  It was one of four new cement bases and the final one I looked at held the last name of the fellow I was looking for.  This is where fellow Blogger, RV'er, and friend, George Yates from Our Awesome Travels has been laid to rest.  Here in this quiet little Mennonite cemetery in southwestern Ontario, Canada.  I didn't get to see George in his final days and I didn't make it to his funeral but I knew I would make it to his final resting place.  What a beautiful morning it was to be there standing beside George's plot with my thoughts and memories of him. 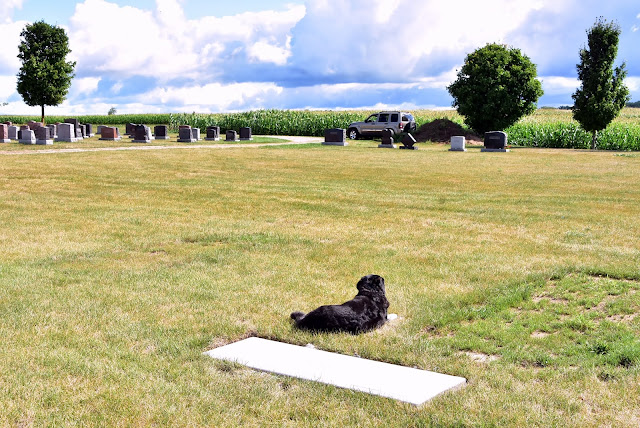 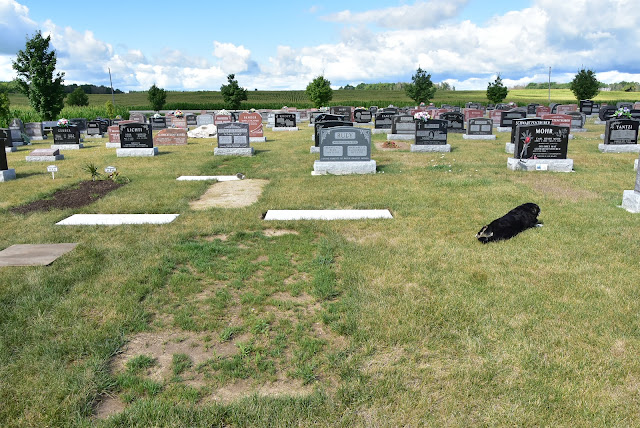 I never did find my ancestors although Pheebs and I walked that whole cemetery looking and looking.  The lettering of many of the older tombstones have not withstood the test of time very well and are unreadable.  I saw so many other stones with the names of people I once knew.  Old school chums, childhood friends, and many acquaintances from around my old home town of Tavistock and the surrounding countryside.  And I had one more cemetery to stop at. 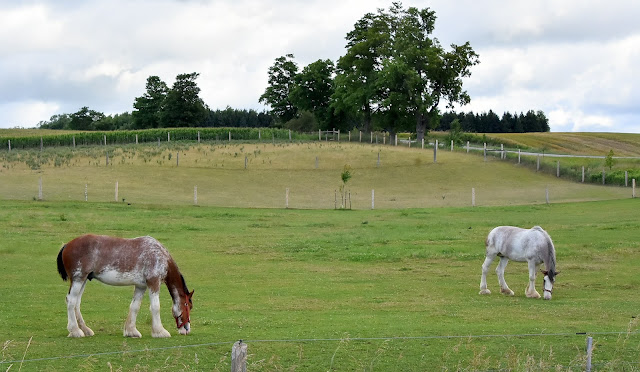 I think it was around 10:30 when I bade farewell to George with a promise to return with my camera when his stone is in place.   Pheebs and I headed for the nearby village of Tavistock.  It had been three or four years since I was last there and I was in for a shock.  Couldn't believe all the new housing in the villages east end.  And the traffic!!  It was no longer the quiet little village I had grown up in back in the late 40's, 50's, and early 60's.  Taking a short drive around town my head was on a swivel with so many old memories fighting for my attention.  Pheebs and stopped at the town's Sub Shoppe for a 6" Tuna sub.  Our first one in almost two years since they jumped the prices way up.  From there it was a last stop at another cemetery in Tavistock's southwest end where my Grandma & Grandpa, Mother, step-Father, and Uncle are buried, as well as more friends and acquaintances.  More thoughts and more memories as I walked around the cemetery reading and remembering names.  It was 11:30 when I finally left the cemetery, nosed the Jeep around, and set a westerly course for home.  It had been quite an emotional morning but what a beautiful morning to be out and about with one's thoughts of past friends, family members, and many acquaintances along the way from days gone by.
GROANER'S CORNER:((  Sam had proposed to young Lisa and was being interviewed by his prospective father-in-law.  "Do you think you are earning enough to support a family?" the older man asked the suitor.
"Yes, sir," replied Sam, "I am."  "Well," said Lisa's father, "think carefully now. There are six of us."
----------------------------
Q: Why are men like computers?
A: As soon as you commit to one, you realize that if you'd waited a little longer you couldn't have gotten a better model!
----------------------------
People don't like to look dumpy in their own photos, which is why a local professional photographer gets a lot of requests asking him to retouch photos. You know, erase the crow's-feet, lop off the 'love handles' -- that sort of thing.Therefore, he wasn't surprised when one woman, pointing to a family portrait, asked him, "Can you take thirty pounds off me?" until she added, "and put it on my sister?"
================= 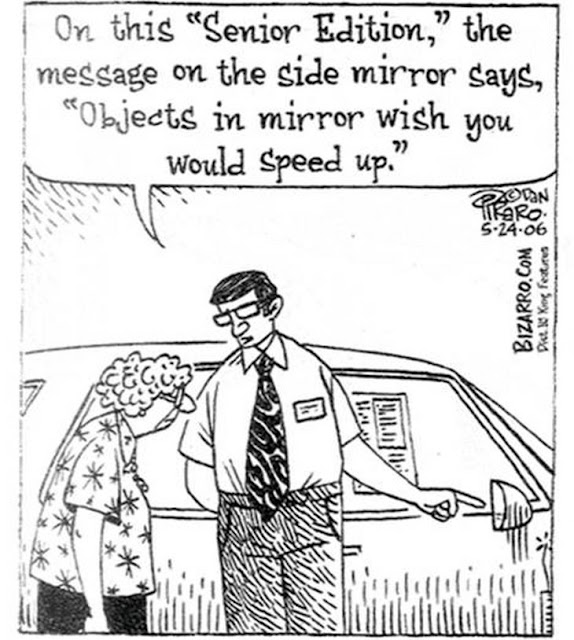 Hey Wiz, doesn't that car salesman look like the late Fred Ashton.  I took the photo below at the little churchyard north of Shakespeare this morning. 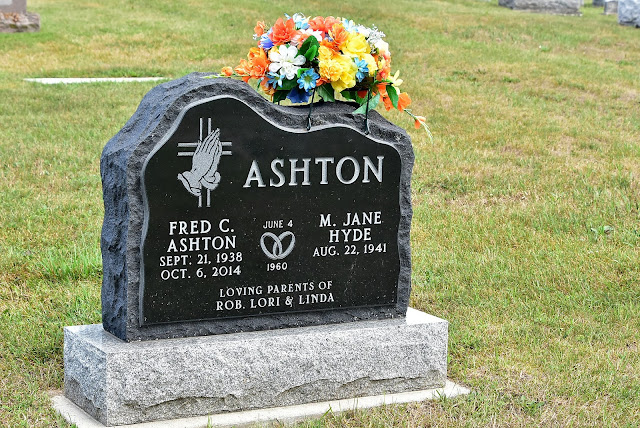