A WOODPECKER CAUSED MY POST TO BE LATE TONIGHT

Brief pockets of lite rain wandered ashore in our morning's pre-dawn hours bringing soft sounds of morning showers.  A moody looking sky greeted Pheebs and I as we rolled out shortly after eight.  It was a short drive into and around Bayfield before we were home again just in time to pick up Kelly and head over to Richard and Gayles with a peach and blueberry pie from the Maitland Market on highway 8 east of Goderich.  In other words, they made the coffee and we brought the eats.  Sticking to my new eating habits it was only half a piece of pie I had.  The second half piece of pie in three months.  Doin good but I'm still stuck at 195 pounds and can't seem to get under it.Possibly energized by the sugar in that half piece of pie I was perked up enough when we got home to get some outside things done instead of falling asleep in my recliner as I have been doing lately.  Next time I talk to my diabetic nurse in a couple weeks I'm going to have some questions for her.Remember about a month ago or so when I had to wear a blood pressure monitor for a full 24 hour period?  Well, they finally phoned with the results of that blood pressure test Friday.  And the results were.......no results:((  The report had apparently been lost so now I have to do that 'squeezy thing on my arm' test all over again in a couple weeks from now.  Oh well, at least it doesn't hurt except to wake up screaming every thirty minutes in the night thinking a big snake has just wrapped itself around your arm.Been quite a while since I last accidentally caused injury to myself but I made up for it this afternoon when while moving a couple of overhead boards I failed to see the brick sitting on top them.  My first awareness and acquaintance with the brick was a sudden jolt of pain to my big toe on my left foot.  I didn't see stars, I saw whole Universes!!  Hauled my sock off about an hour later expecting to see a bruised toe.  Nope, everything looked fine, or so I thought.  Not long after that I went to put my shoes on but it was 'no go' for my left shoe.  My darned toe had swelled up allowing me only into a loose-fitting bedroom slipper.  Little did I know that half an hour later I would be outside in the dark limping along the road and through bushes and trees.  We'll see how that toe looks in the morning.So, it was exactly 6:40 tonight when we heard a loud 'bang' close by outside.  Our power flickered on and off seconds later and that was it......we were dead in the water.  Our power was 'OUT AGAIN'Okay, fast forward to 9 p.m. when our power finally came back on.  So what happened??  Luckily, there were 3 eyewitnesses who saw what happened and this is what they said.  It was a Woodpecker what did it.  Yep, a Woodpecker.  It was pecking around the transformer on a pole and 'ZAP'!!  They had the dead Woodpecker to prove it too.  Kelly saw it but I didn't.  I didn't need to see a poor little dead Woodpecker.  With my slippers on and a limp to go with them, I hobbled around the corner from our place, down the road, and through a bunch of trees to see if I could see the power company that Kelly had phoned a half-hour before.  And yes, there they were working on the floodlit transformer pole.  Nice to have our power back on so I had to hurry up and get busy with this unfinished post.............GROANER'S CORNER:(( A Few Wise One-Liners::

- Suicide is the most sincere form of self-criticism.

- Tact is the art of convincing people that they know more than they do.

- Take care to get what you like or you will be forced to like what you get.- Teamwork is essential; it allows you to blame someone else.- Technology makes it possible for people to gain control over everything, except technology.- That which cannot be taken apart will fall apart.================ 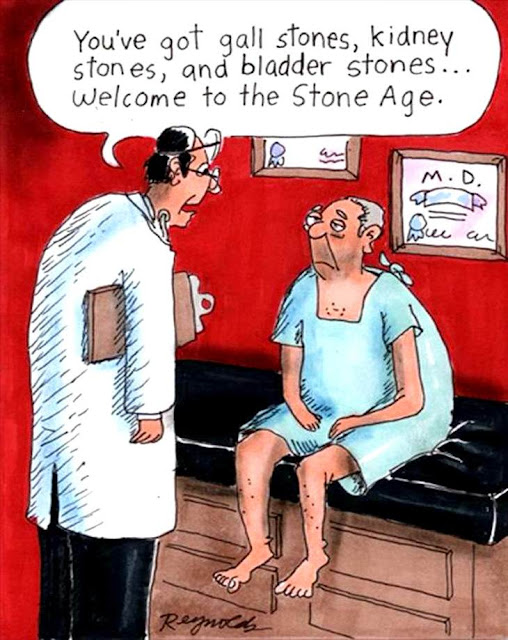