Late Friday morning after receiving a phone call telling us the Winnebago Spirit had passed its safety inspection and could be picked up we were happily on the road within 15 minutes heading for Fody's garage south of Woodstock Ontario.  With thunder rolling across a threating sky we ran right smack into a wall of rain about 5 minutes after leaving home.  Windshield wipers on high hardly kept up with the deluge of water.  Cars pulled over with four way flashers going.  Five minutes later we drove out of it and five minutes after that we were driving through patches of sunshine again.  By the time we reached Fodys an hour and a half later we were under sunny skies but OMG the heat and humidity were crushing.
Marvin, the rig's owner had previously given me the rig's spare key so the first thing I did was unlock the rig, start it up, and turn on the A/C.  Minutes later Marvin and his wife Betty rolled in from their home in Guelph Ontario.  We already had license plates for the rig and Marvin helped me put them on.  While I chatted with Betty, Kelly and Marvin took care of the paperwork, etc.  As has been most of our experiences with fellow RV people we found Betty and Marvin to be genuinely super nice people.  With the heat and humidity taking it's toll we were all anxious to get back into our air conditioned vehicles.  We waved our good-byes to Betty and Marvin as they rolled out heading for their Son's place in nearby Delhi.  Now, for our journey home. 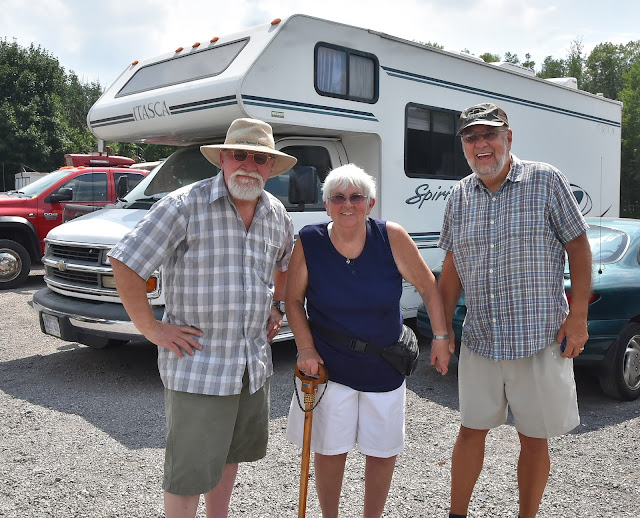 With Kelly and her Blackberry phones GPS leading the way in the Jeep, Pheebs and I in 'our' Class C Winnebago Spirit followed close behind.  Within half an hour we had both lost complete track of each other.  Kelly missed a left hand turn and before we knew it we were crossing over the 401(the 401 is the equivalent of an American Interstate) into Woodstock Ontario's Friday afternoon rush.  I made the next mistake by moving into the wrong lane hoping to get onto the 401.  Kelly, by now a couple vehicles ahead of me made it through a green light and I didn't.  It was a long red light I waited for as Kelly totally vanished in the mosh of traffic ahead.  Seemed like I sat there for an hour before the light turned green again.  Kelly had turned into a Hotel parking complex but I didn't see her.  What I did see was a McDonalds ahead and figured that is where she probably would be waiting for me.  Luckily with my 24' length I was easily able to navigate my way around the McDonalds area which in turn was in a Plaza.  Cruised around the area but no sign of the Jeep.  I knew Kelly was familiar with the 401 in that area having traveled it many times back and forth to her Mother's place in Spencerport New York.  I reckoned she just might work her way through the chaotic traffic back to the 401 and head West to a service center she was familiar with which in turn was right on our way home.  With that thought in mind I headed out of the Plaza and worked my way back grabbing the westbound 401 ramp and heading for the service center.  Pulled in and located myself in a parking lot near the 401  facing East.  No sign of a little Jeep coming so moved myself over to near the gas bar where I would be more visible.   It was here Pheebs began to let me know she needed out for a washroom break.  Too much traffic around the gas bar so I relocated to a grassy area parking lot nearby and let Pheebs out.  It was while standing here looking in the direction of the 401 I saw a very familiar looking little brown Jeep backing up and exit ramp.  Jumped up and down waving my arms and sure enough a few minutes later Kelly worked her way around and into the parking lot.  She said she had seen me near the gas pumps a few minutes before but couldn't get my attention.  Needless to say it was a happy reunion and with both of us making a couple blameless mistakes all was well.  It made for a memorable little adventure for us.
Most (but not all) of the rest of our journey was an uneventful drive through our peaceful countryside.   Well that is until we were about 20 miles from home.  I had been watching the western sky with concern even before we had reached Woodstock earlier.  Massive cloud columns were building and I knew that was not a good sign.  As skies darkened we got into some rain and then the heavy wind gusts swept in from the south hitting us broadside.  The Winnebago held her ground and didn't waver.  Five minutes later the fast traveling black clouds, wind and rain had blown through and we were home free.  It was 6 p.m.
Can't say enough how impressed I was with the little Winnie Spirit driving back from Fodys Garage near Delhi.  Having driven these same types of van chassis for countless thousands of miles for the Stratford Airporter years ago I was totally at home with it's handling.  Of course the Dodge airport vans didn't have a big house on the back but this Chevy 3500 drove like it didn't even know it was carrying a mobile house configuration.  I was happy to be back in a solid factory built cab again too.  The thought ran through my mind, 'ya know I wouldn't hesitate to drive this rig right up to Alaska and back.  No, we have no plans to go to Alaska.  It's never been a desired destination for us.  But no matter, I had the thought anyway.
So, you can imagine what we were doing this morning.  After a short drizzly ride into Bayfield with Pheebs we were home again.  Kelly was already in the rig going through the coach's Winnebago pouch checking on the rigs history.  Again, more good news as it was plain to see Winnie had been well looked after over the years.  All the bills, coach and chassis manuals were intact and in good shape.  Awning is less than two years old, stove and shower were hardly used as several previous owners were RV Park people and preferred to use Park facilities.  So, all and all we are very pleased with the rig and spent time in it this morning going over everything with lots of new ideas on how to do this and that and make it our very own. 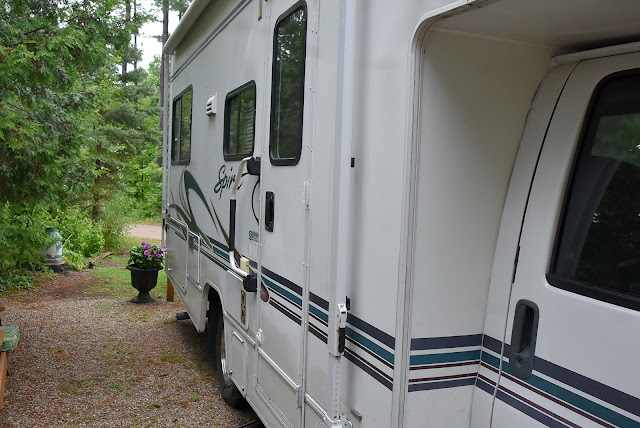 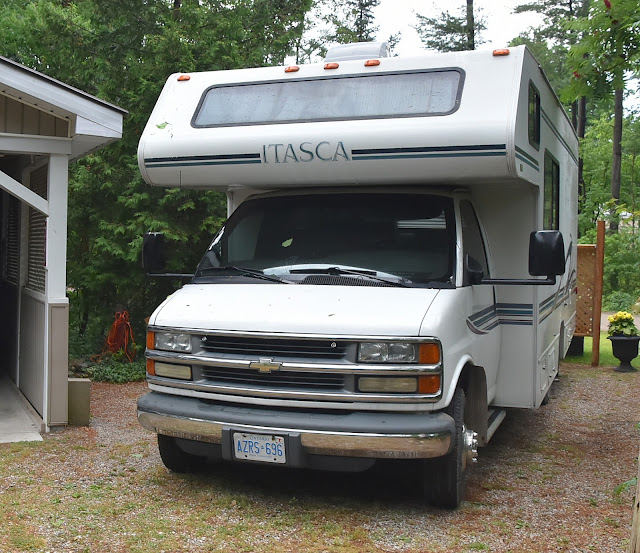 We hadn't really intended to get into any projects with the rig today but you know what it's like when you get something like that.  Started off innocently enough with me cleaning the windows in the cab, figuring out the Sony radio, etc.  But I couldn't clean the coach windows because.......one of the previous owners before Marvin and Betty had it had done all the windows with a film of a thin saran wrap like privacy plastic.  The coating had rippled making the outside look out of focus and blurry.  That would never do and so with a hair dryer blowing hot air, a couple razor knives, various cleaners, and brushes, etc. we set to work on the windows.  It's a lot of elbow grease but at least we have one window half done and we'll continue on the other windows at a leisurely pace until they are all done.  But then.......
Despite a refreshingly cool morning after Friday's rain the heat and humidity returned this afternoon along with the Sun.  Too hot for us to be outside but I'll be darned if in our kid like excitement we didn't tackle the big job (for us anyway) of taking the whole dinette out.  And I'll be second darned if we didn't finish the job too.  The dinette table including both bench seats is now out of the rig.  And by golly we've got enough room in there for a Saturday night square dance now.  Well, not quite of course but we'll definitely be able to put in some comfortable seating which for us has always been a top priority.  Balancing a bowl of banana soup on one knee and a chicken salad sandwich with a cup of coffee on the other is pretty much how we have done it over the years.  Anyway, it was a productive afternoon and we got a few things done we had no intentions of doing in the first place.  I like it sometimes when things kinda happen that way............... 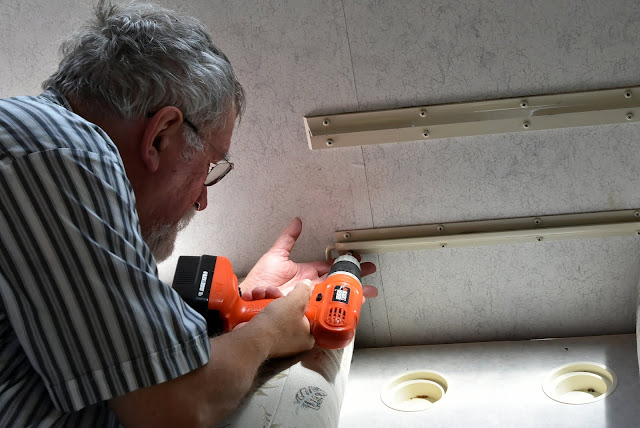 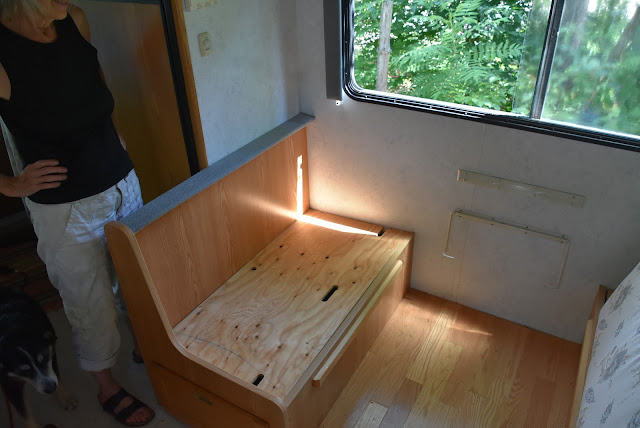 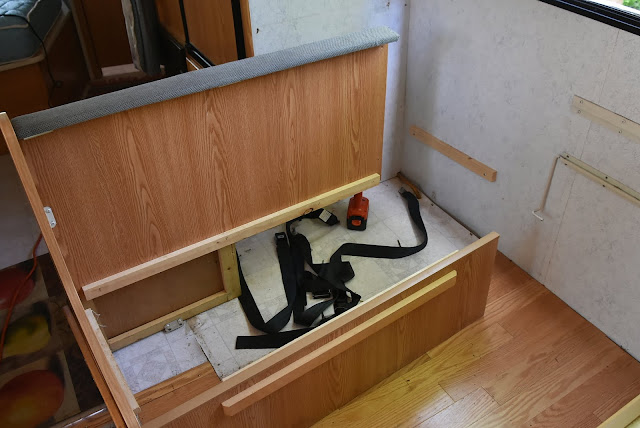 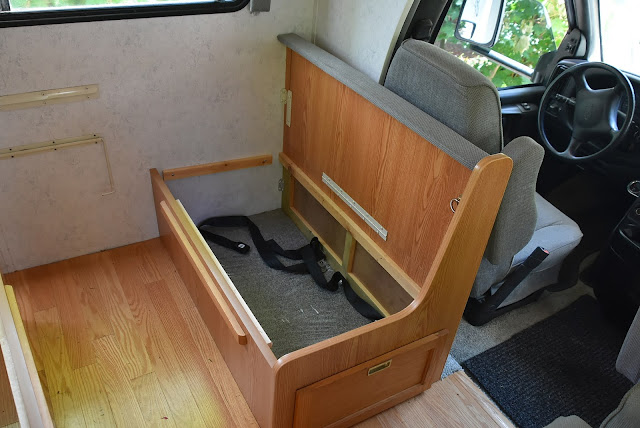 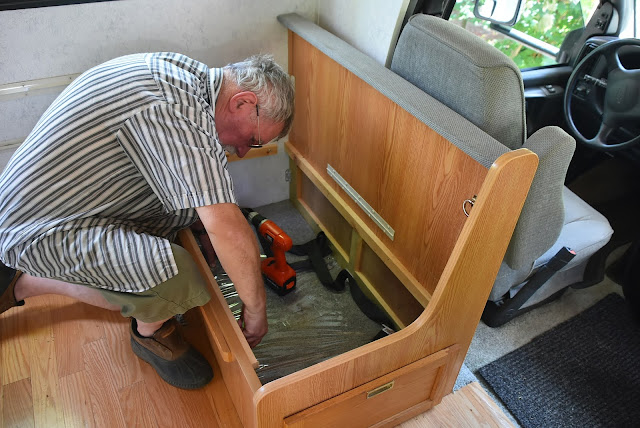 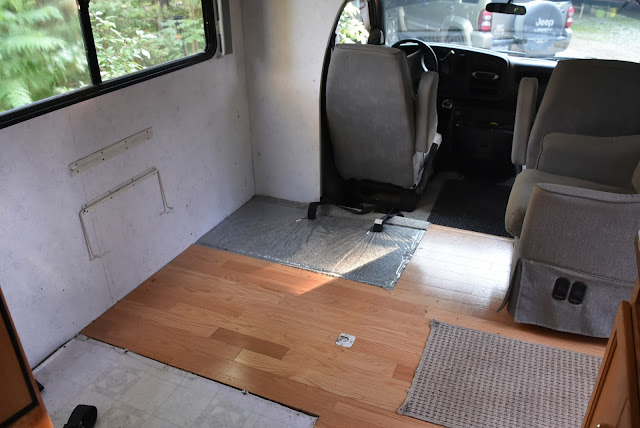 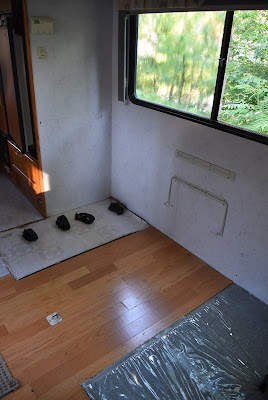 GROANER'S CORNER:((  A Few Old Country Song Titles::
- If The Phone Don't Ring, You'll Know It's Me
- How Can I Miss You If You Won't Go Away?- I Liked You Better Before I Got to Know You So Well- I Still Miss You Baby, But My Aim's Gettin' better- I Wouldn't Take Her To A Dog Fight 'Cause I'm Afraid She'd Win- I'll Marry You Tomorrow, But Let's Honeymoon Tonight- I'm So Miserable Without You, It's Like You're Still Here- My Wife Ran Off With My Best Friend And I Sure Do Miss Him- She Got The Ring And I Got The Finger- You're The Reason Our Kids Are So Ugly- Her Teeth Was Stained But Her Heart Was Pure- She's Looking Better After Every Beer
=============== 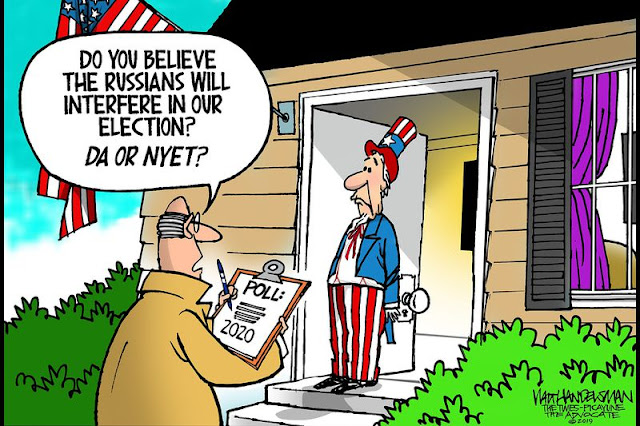