AND THEN WE HEARD TINY SQUEALS OF LAUGHTER AHEAD ON THE TRAIL...COULD IT BE FAIRIES? OH I WAS SURE HOPING SO:))

So nice early each morning when opening our patio door letting Pheebs out to hear the twitterings of early songbirds in our backyard trees.  A truly fine way to start any day.  It occured to me while listening to the birds it was nine months to Christmas Day.  I don't know why my mind works that way, it just does sometimes.
Always encouraging any time at dawn when opening our curtains each morning to see pink skies filtering through our many pine trees.  With no wind blowing the branches around I was hopeful for some slightly warmer air.  We did get over 40F and although not exactly warm it was still mighty fine for catching up on some outside yard work later. 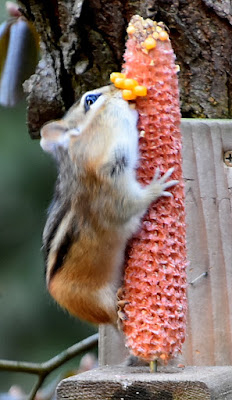 Pheebs and I wandered over to Clinton this morning and of course I should have known the bird seed place wouldn't be open.  No matter, grabbed a coffee to go at Hortons and meandered our way over to the Bannockburn Conservation Area.  It was a beautiful morning with a clear deep blue cloudless sky overhead. 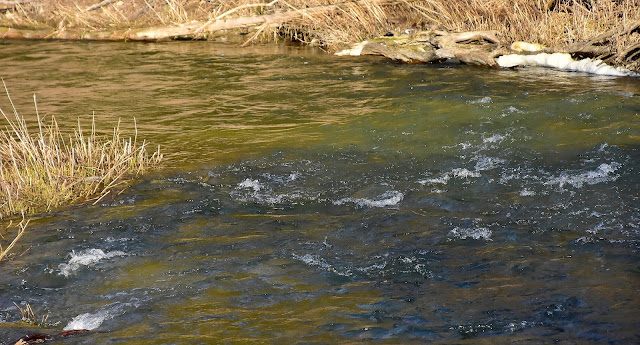 No cars in the Bannockburn parking lot so we were off down the trail enjoying the peaceful ambience of nature.  Didn't go all the way around the loop trail but just far enough to get a bit more exercise for my winter weakened legs.  So nice in the forest but oh my the mud in places.  Anyway it was a nice 40 minute walk with babbling brooks, twittering birds in the tree tops and sunshine sparkling down through the tall pines, cedars, and maple trees.  And how fresh the forest air.  And then I heard the playful squeals of small children coming along the trail. 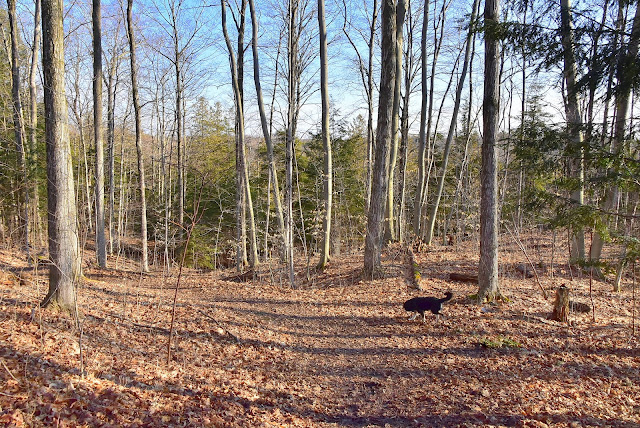 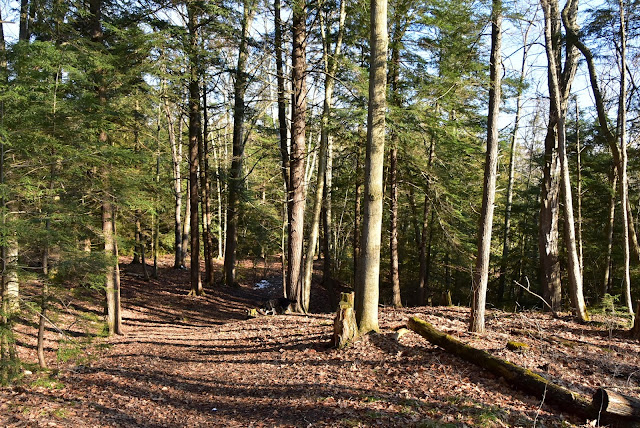 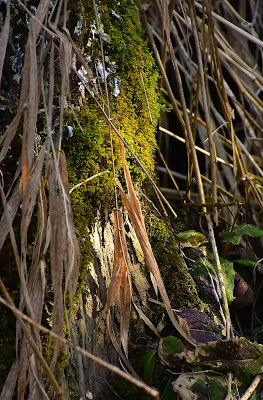 Pheebs and I stepped off the trail to let a Mom and her two small children go by.  In passing she said something about having to get them out of the house and burn off some energy.  A few minutes later and a little further along on our homeward journey I heard another small voice.  Could it be fairies?  Oh I was sure hoping so but nope it was another Mom coming along the trail with another wee toddler.  Pheebs and I managed to slip on by them with a cheery 'Good Morning' and headed for the Jeep.  We were home 20 minutes later. 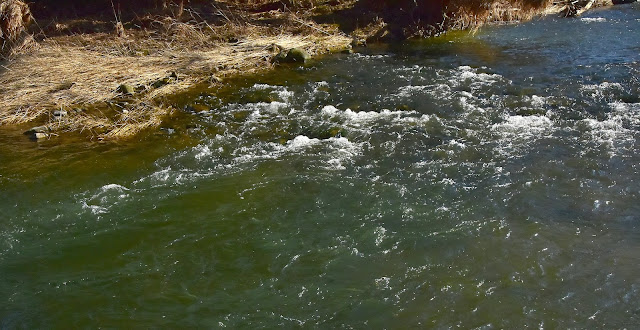 Without stopping for a rest I hauled out my wheelbarrow and with pitchfork and lawn rake I picked up all the leaves and needles I had raked up on neighbor Monica's lawn, loaded them into our utility trailer and hauled them off to the dump.  On the way back I noticed neighbor Pat up the road had a pile raked up by the edge of the road so with the utility trailer already hooked up I stopped and scooped her pile of leaves and pine needles as well.  Off to the dump with a second big load and that was it for the day.
With skies clouded over again I headed inside and brewed myself up a Cinnamon Chalet tea.  Had a real nice potpourri smell to it.  Cream definitely takes the harsh bitter edge off coffee but doesn't seem to do anything for tea so I have dispensed with putting cream in tea.  And of course I never add sugar to tea or coffee.

GROANER'S CORNER:((  A man suffered a heart attack and had by-pass surgery. He awakened to find himself in the care of nuns at a Catholic hospital. As he was recovering, a nun asked him how he was going to pay the bill. He replied in a raspy voice, "No health insurance." The nun asked if he has money in the bank. He replied "No money in the bank." The nun asked " Do you have a relative who could help you?" He said "Just a spinster sister who is a nun." The nun, slightly perturbed, said "Nuns are not spinsters! Nuns are married to God." The patient replied, "Then send the bill to my brother-in-law!"


Our 15-year-old daughter, Melanie, had to write a report for school about World War II, specifically D-Day and the invasion of Normandy. “Isn't there a movie about that?” she asked. I told her there was, but I couldn't think of the name. Then it came to her, “Oh, I remember! Isn't it something like ‘Finding Private Nemo'?”
================ 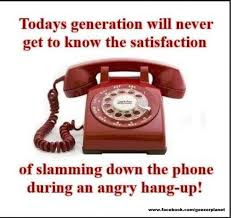