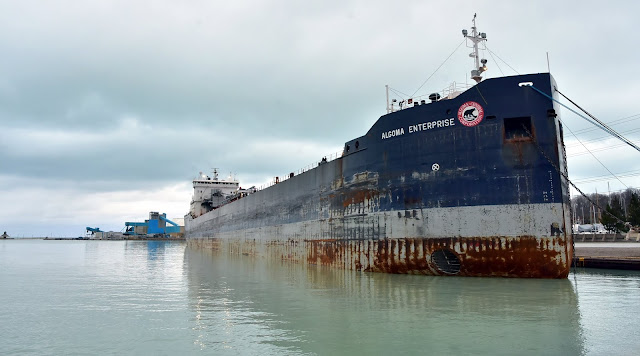 My curiosity got the best of me this morning and I soon found Pheebs and I on our way back to Goderich's harbor.  I noticed Saturday morning while we were walking along the damaged shoreline various vehicles going back and forth on the Rotary Cove road.  Sign had said no vehicles permitted so I didn't drive past that to the dog walking area.  Thinking it over I understandibly figure they do not want vehicles down that road while work is going on.  Makes sense.  But without a rope or chain across the entrance on the week-end I also figure they have deliberetely left it open for people to cruise the lakeshore and take their dogs for a walk as usual.  So with that confirmation in my head resolved Pheebs and I drove to the end of the road where the dog walking area is and as suspected yesterday they haven't done any work on the eroding bank there yet.  So, I took a few photos. 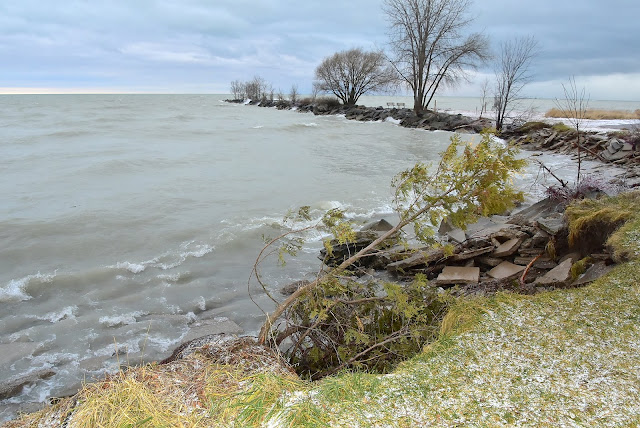 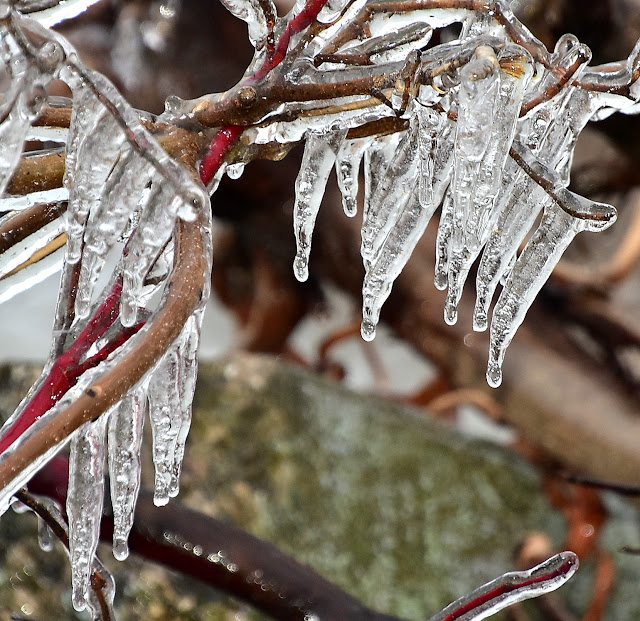 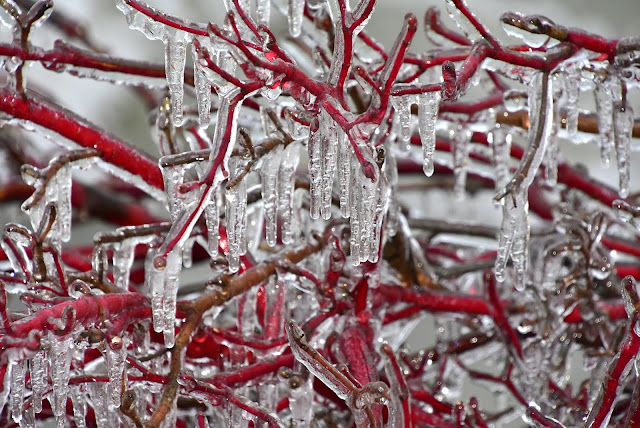 While heading to and from Rotary Cove's dog walking area I noticed three large freighters in the harbor.  Two were at the Goderich Salt Mine and a third was across the harbor, tied up and riding high in the water suggesting the ship was had no cargo aboard. 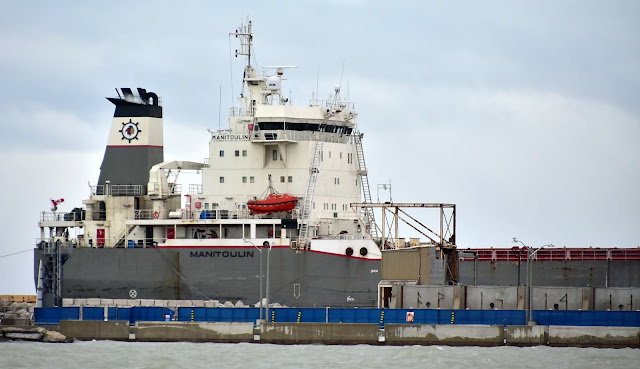 The lone freighter docked at the north side of the harbor either arrived early and is awaiting it's turn to load at the salt dock or the grain elevators or maybe it plans to sit out the winter there.  Last big lake freighter docked here spent a couple years in that spot then was towed away to a scrap yard somewhere and dismantled. 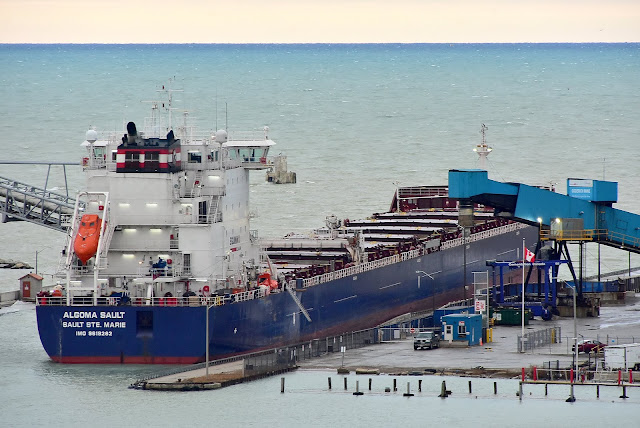 With a skiff of snow on the ground and temperatures hoovering around the freezing mark a stiff breeze made it feel colder than it actually was.  The wind coming in off the lake froze up my hands while taking a few photos.  Even Pheebs was anxious to get back into the Jeep.  We weren't long in heading home to the warm confines of our house.  And that was it, we darn well stayed inside for the rest of the day almost.  One short quick walk this afternoon. 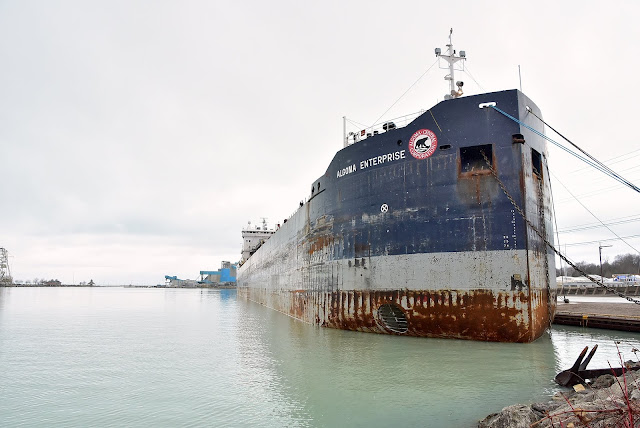 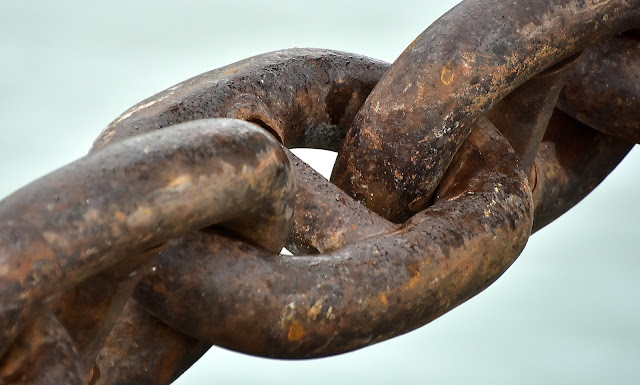 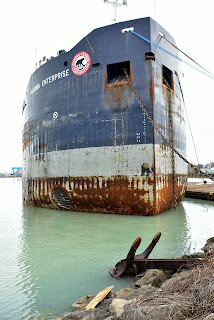 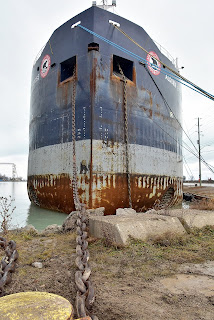 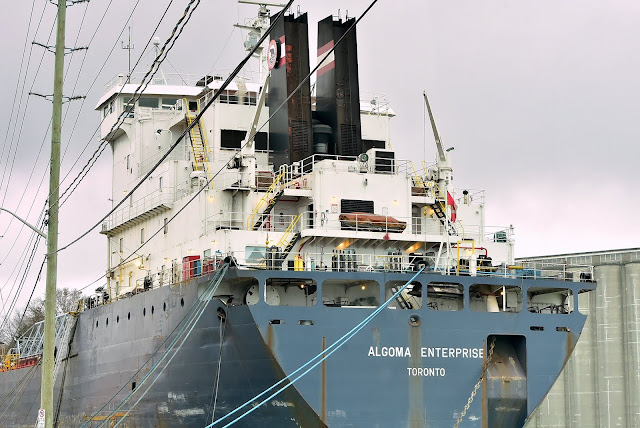 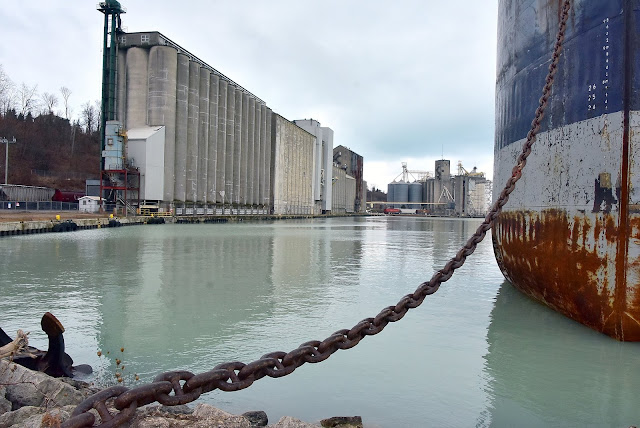 At the time of posting this tonight it is snowing like blazes so I expect I will be on the end of my snow shovel in the morning moving some cold white stuff around.  This is the first time in fourteen years we have been stuck at home in January.

::An Archive Post::  It was February 19th, 2010 while boondocked at the Clark Dry Lake Bed near Rockhouse Road outside of Borrego Springs California when I saw an Ultralight pilot in trouble.  Today I Had To Run Very Fast And Very Far.....To Help Someone
::Al's Musical Favs:: Inside My Mind by Groove Armada:  I like the voices in this one and how they bring a single horn quietly in.  Its the male's voice seemingly in a quavering distance repeating the words 'Blue Skies' that really hooked me on this piece of music right from the first time I heard it years ago.
GROANER'S CORNER:(( Some friars needed to raise more money for books for the school, so they opened up a small florist shop to raise funds. Since everyone liked to buy flowers from the men of God, a rival florist across town thought the competition was unfair. He asked the good brothers to close down, but they would not. He went back and begged the friars to close. They ignored him.  So, the rival florist hired Hugh MacTaggart, the roughest and most vicious thug in town to "persuade" them to close. Hugh beat up the friars and trashed their store, saying he'd be back if they didn't close up shop. Terrified, they did so, thereby proving that "Only Hugh can prevent florist friars." 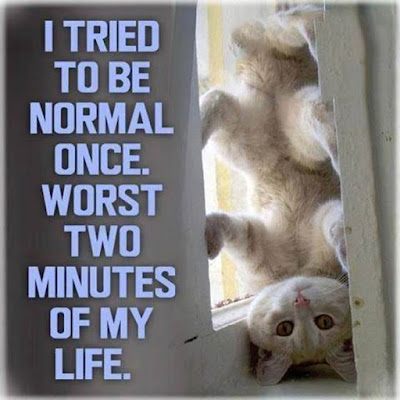