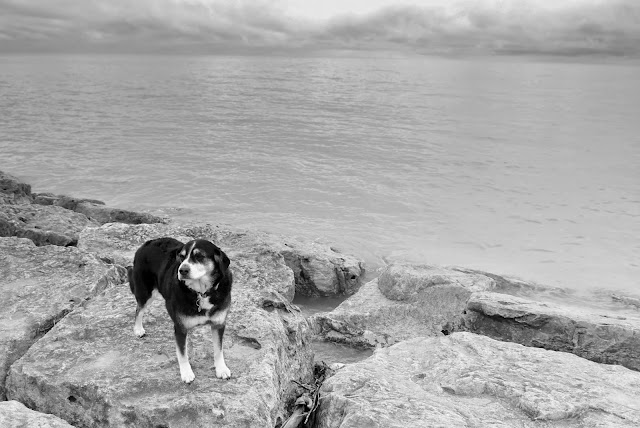 Despite another overcast morning I was determined to head out and find a few photos.  Loaded up the little Boogers and drove north in the direction of Goderich.  Needed bananas and milk.  Picked up a coffee to go at McDonalds and headed down to the harbor.  Being a Saturday there were no workers or machines working so decided to park the Jeep at the 'closed for the season' Beach Street Station and take a walk along the shoreline where bank restoration has been going on.  Rough walking in places with rocks and stones still piled up by past Lake Huron storms. 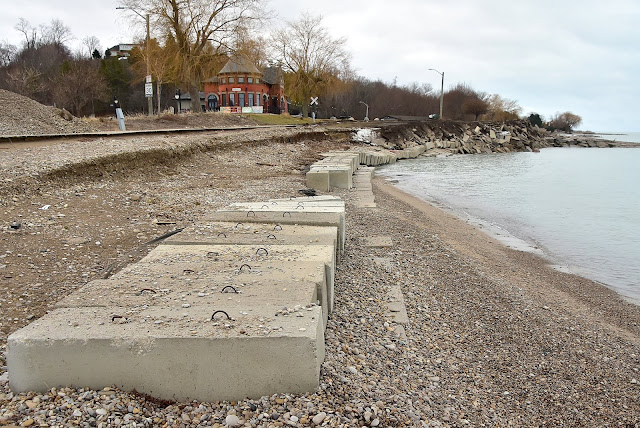 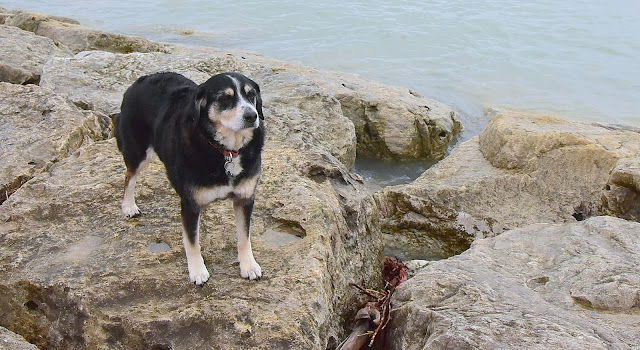 I hope these efforts of dumping large boulders into the water then backfilling will be enough.  It's maybe a cheaper way to go rather than heavy duty reinforced poured concrete barriers.  I did read somewhere that these large boulders being shipped in are coming from the Owen Sound area. 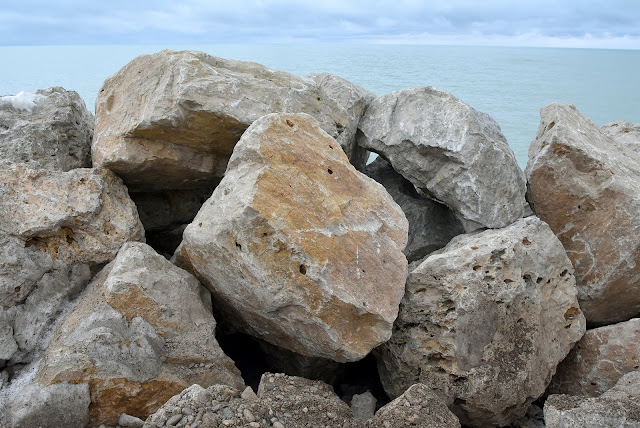 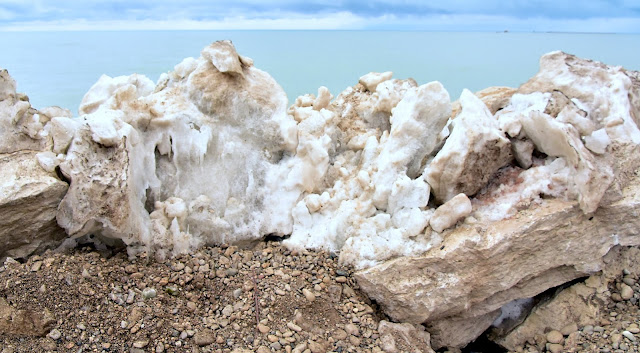 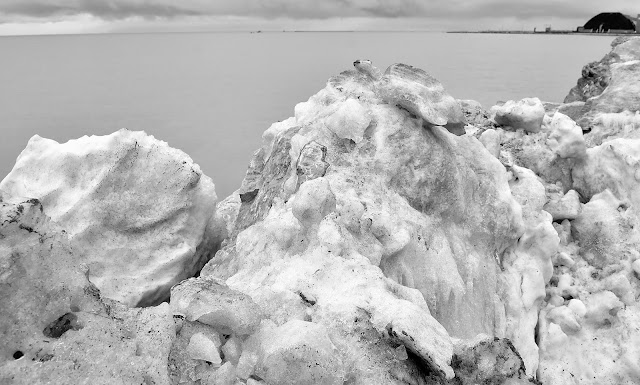 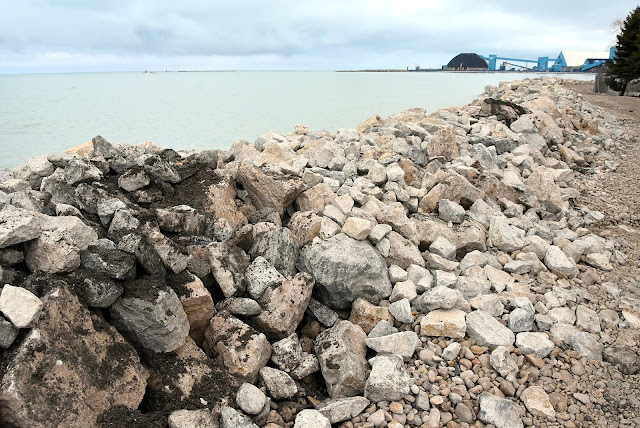 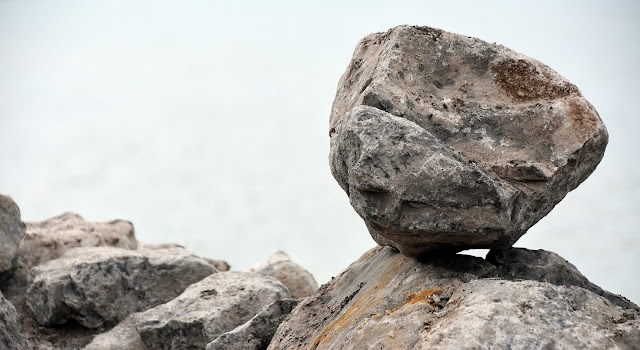 We didn't walk all the way to the damaged dog walking area but in the distance I didn't see any machines down that way so my guess is they are working on the priority spots first especially behind the Veolia Water Plant where shoreline damage was most severe. 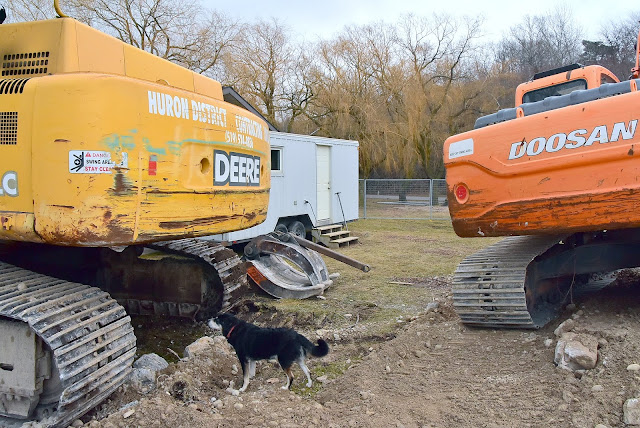 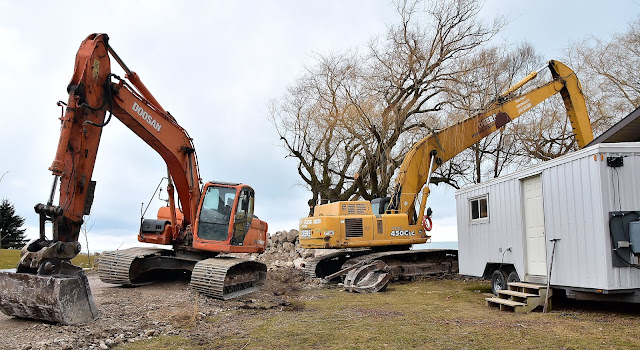 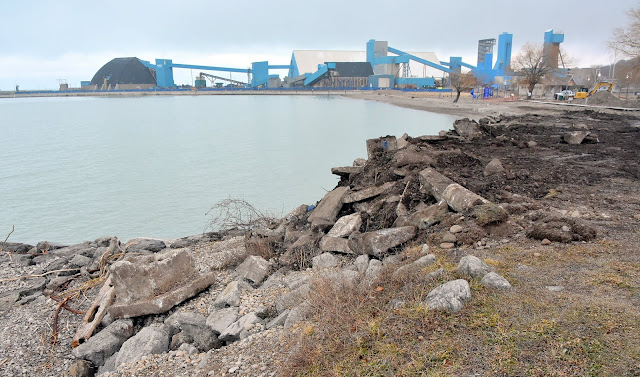 With the exception of an early heavy duty snowfall back in November I think we have been pretty lucky so far with our winter weather.  A surprising number of above freezing days have definitely helped make things easier for getting around.  By the end of this coming week we're predicted to be in the high 30's again.  Not so good for skiiers and snowmobiles but great for people like me who aren't into those kinds of things anymore.  I was never into snowmobiling but I did have a few nice years where I really enjoyed cross country and down hill skiing.  Wished I had got into downhill skiing earlier in my life because I really enjoyed tumbling head over heels down many of those long steep hills. 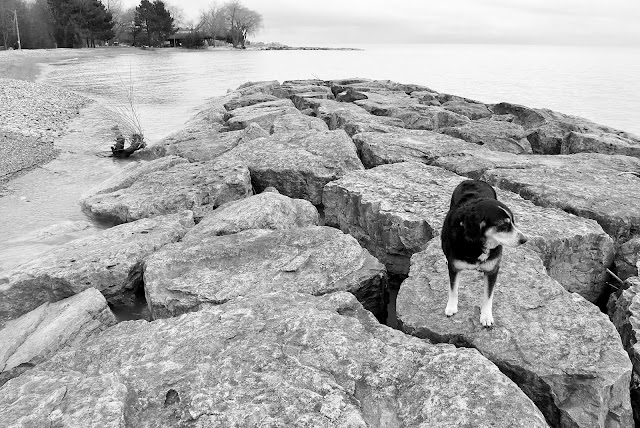 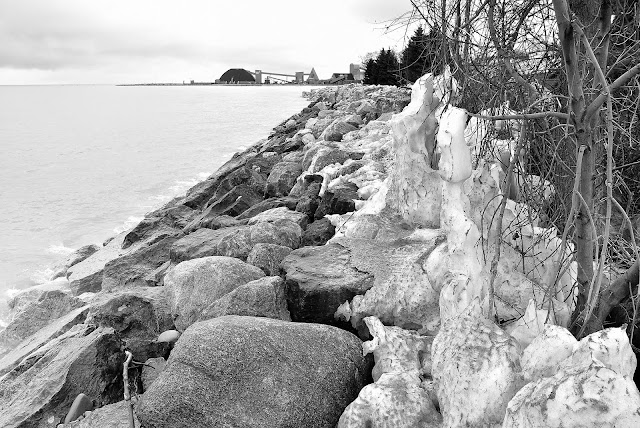 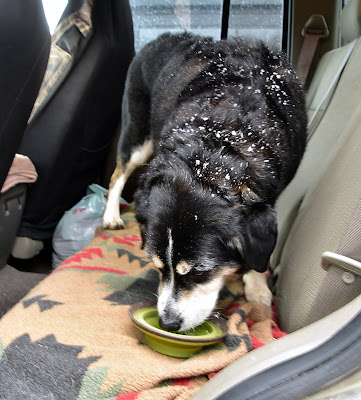 A 76-year-old woman walked down the hallway of Clearview Addictions Clinic, searching for the right department. She passed signs for the "Heroin Addiction Department (HAD)," the "Smoking Addiction Department (SAD)" and the "Bingo Addiction Department (BAD)." Then she spotted the department she was looking for: "Facebook Addiction Department (FAD)."It was the busiest department in the clinic, with about three dozen people filling the waiting room, most of them staring blankly into their Blackberries and iPhones. A middle-aged man with unkempt hair was pacing the room, muttering,  "I need to milk my cows. I need to milk my cows."A twenty-something man was prone on the floor, his face buried in his hands, while a curly-haired woman comforted him.  "Don't worry. It'll be all right.""I just don't understand it. I thought my update was LOL-worthy, but none of my friends even clicked the 'like' button."  "How long has it been?"  "Almost five minutes. That's like five months in the real world."  The 76-year-old woman waited until her name was called, then followed the receptionist into the office of Alfred Zulu, Facebook Addiction Counselor.  "Please have a seat, Edna," he said with a warm smile. "And tell me how it all started."  "Well, it's all my grandson's fault. He sent me an invitation to join Facebook. I had never heard of Facebook before, but I thought it was something for me, because I usually have my face in a book."  "How soon were you hooked?"  "Faster than you can say 'create a profile.' I found myself on Facebook at least eight times each day -- and more times at night. Sometimes I'd wake up in the middle of the night to check it, just in case there was an update from one of my new friends in India . My husband didn't like that. He said that friendship is a precious thing and should never be outsourced."  "What do you like most about Facebook?"  "It makes me feel like I have a life. In the real world, I have only five or six friends, but on Facebook, I have 674. I'm even friends with Juan Carlos Montoya."  "Who's he?"  "I don't know, but he's got 4,000 friends, so he must be famous."  "Facebook has helped you make some connections, I see.""  Oh yes. I've even connected with some of the gals from high school -- I still call them 'gals.' I hadn't heard from some of them in ages, so it was exciting to look at their profiles and figure out who's retired, who's still working, and who's had some work done. I love browsing their photos and reading their updates. I know where they've been on vacation, which movies they've watched, and whether they hang their toilet paper over or under. I've also been playing a game with some of them."    "Let me guess. Farmville?"  "No, Mafia Wars. I'm a Hitman. No one messes with Edna.""Wouldn't you rather meet some of your friends in person?""No, not really. It's so much easier on Facebook. We don't need to gussy ourselves up. We don't need to take baths or wear perfume or use mouthwash. That's the best thing about Facebook -- you can't smell anyone. Everyone is attractive, because everyone has picked a good profile pic. One of the gals is using a profile pic that was taken, I'm pretty certain, during the Eisenhower Administration. ""What pic are you using?""Well, I spent five hours searching for a profile pic, but couldn't find one I really liked. So I decided to visit the local beauty salon."  "To make yourself look prettier?"  "No, to take a pic of one of the young ladies there. That's what I'm using."  "Didn't your friends notice that you look different?""Some of them did, but I just told them I've been doing lots of yoga."  "When did you realize that your Facebooking might be a problem?"  "I realized it last Sunday night, when I was on Facebook and saw a message on my wall from my husband: 'I moved out of the house five days ago. Just thought you should know.'"  "What did you do?"  "What else? I unfriended him of course!"
------------------------
Why don't some couples go to the gym? Because some relationships don't work out.
-------------------------
Judge: "I order you to pay $10,000."
Mario: "Why?"
Judge: "It’s a fine."
Mario: "No itsa not!"
-----------------------