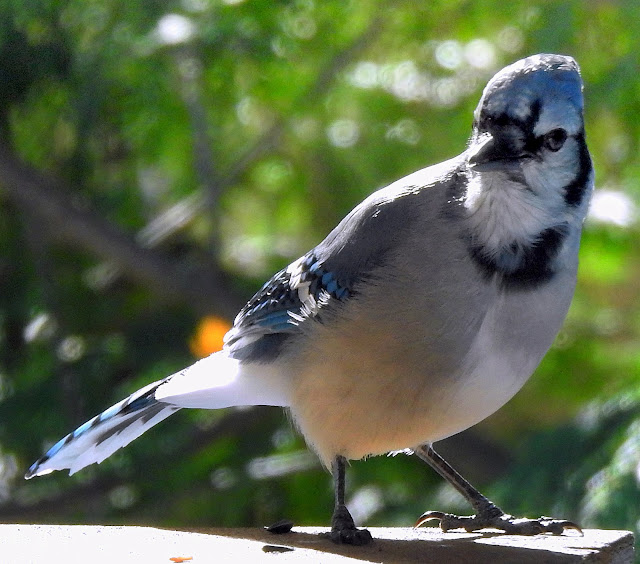 With record lows overnight Friday's wet snow turned into Saturday's ice crust.  Temps in the morning of 21F were driven even lower by a brisk east wind.  The only saving grace for the day was clear blue skies and sunshine and that beats dull and gray any day.  With rays of sunshine beaming through our sunroom windows and warming us up we could at least enjoy that warmth and how nice everything looked outside in the sunlight. 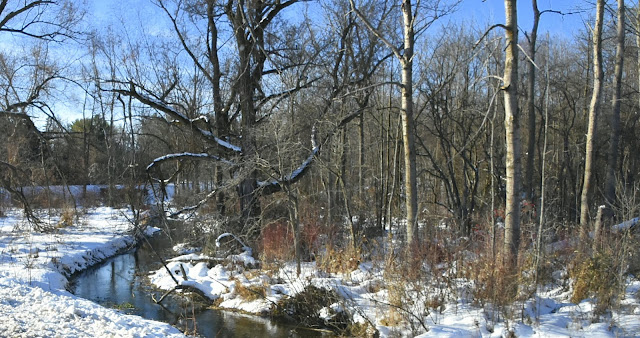 Due to the coldness most of my day was spent inside except for Pheebs and I getting out and about in the Jeep for an hour or so in the morning.  Goderich and back with a few icicle shots down along Lake Huron's freezing shoreline. 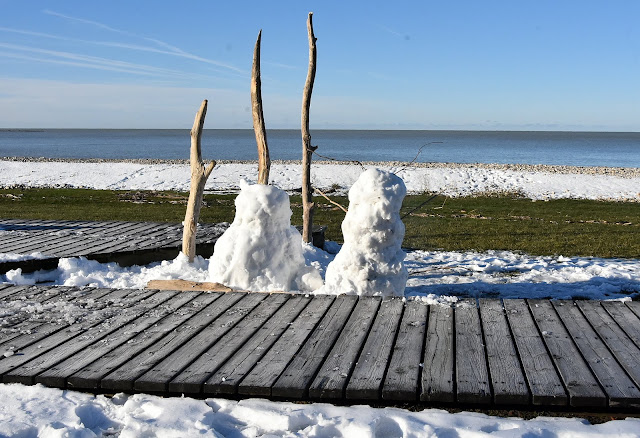 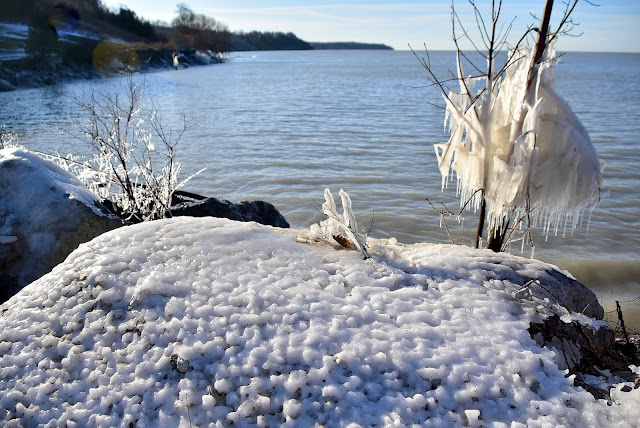 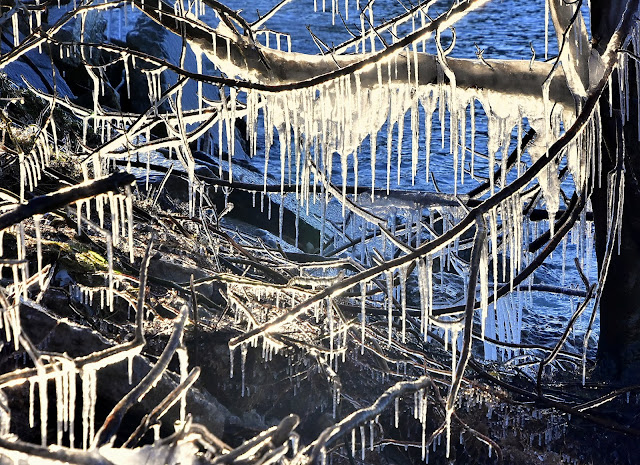 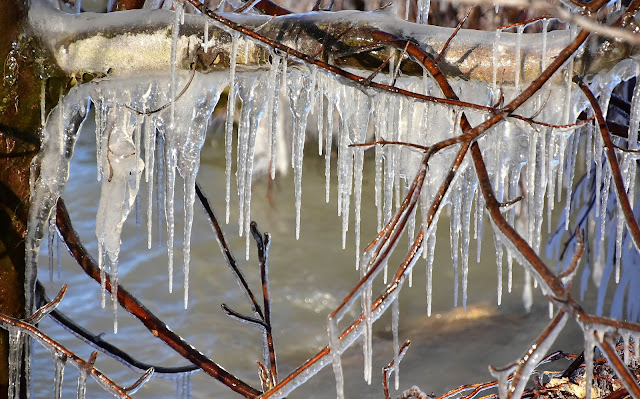 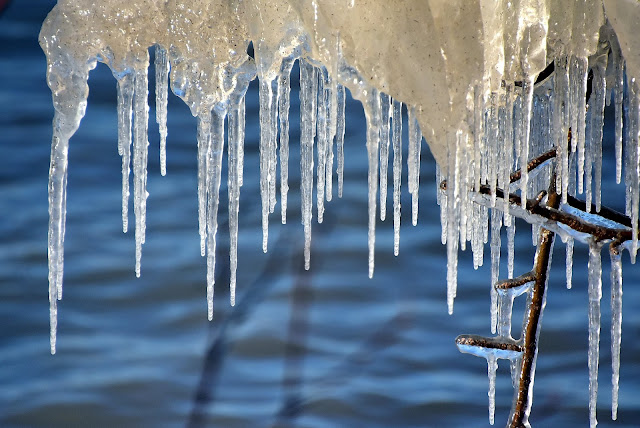 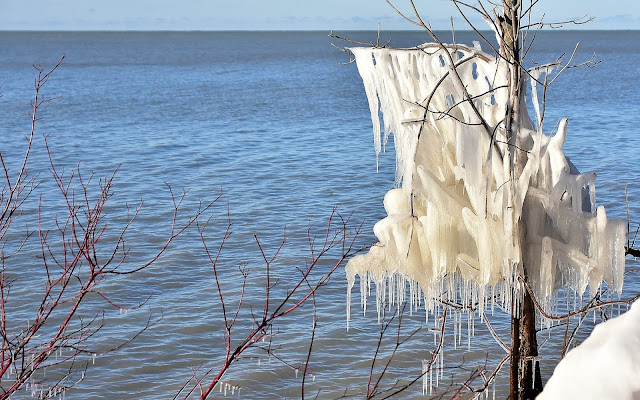 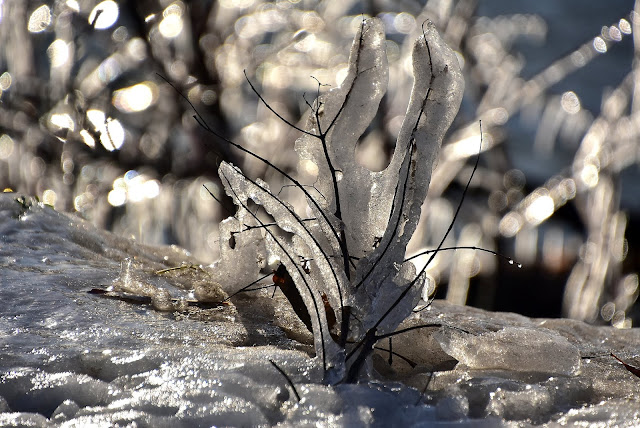 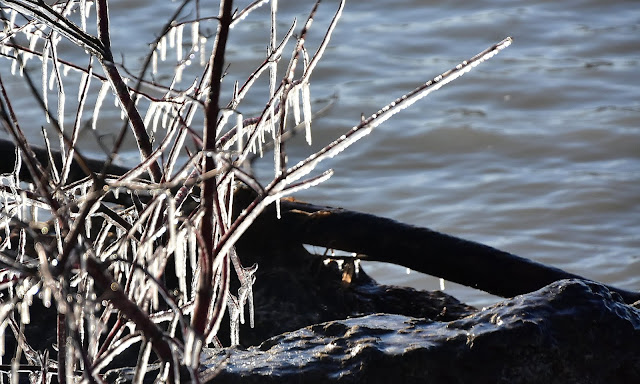 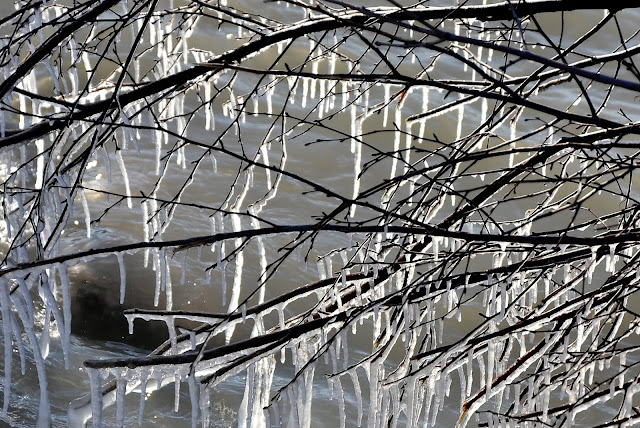 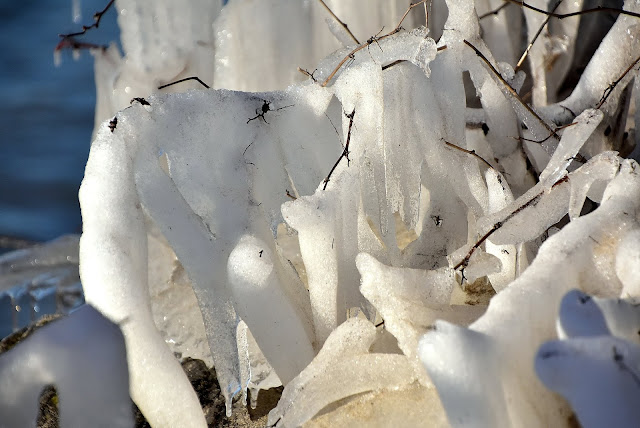 Even the birds today seemed to be staying close to their sheltered spots in the surrounding cedar and pine trees.  Except for the Blue Jays that is. 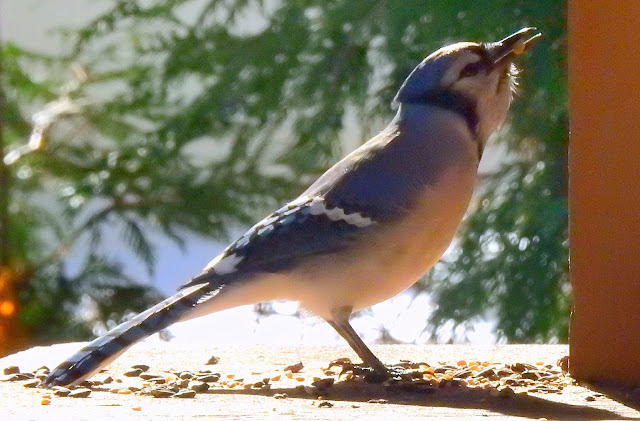 A Bell Telephone technician finally showed up this morning just before noon but left minutes later after we told him Bell had sent a message two days ago saying repairs had been done on a telephone cable somewhere nearby.  Technician didn't seem to know anything about that so off he went to see what was going on.  Meanwhile we still did not have a working landline telephone.  I think this might be day five now.  Half an hour later while doing laundry I heard Kelly call from the kitchen, "we've got a dial tone on the phone".  'Walla':))  Five minutes later the technician phoned from somewhere nearby saying he had found where the cable had been repaired and that it had not been hooked back up correctly.  He righted the wrong and we had a working landline phone again.  I well remember the day many years ago when Bell Telephone was very well thought of as a reputable company and a sought after secure place of employment for many.  That of course is no longer the case and Bell like so many other once fine companies has fallen into the morass of corporate greed, indifference, incompetence, and shady business practices.  Too bad but it so often seems to be the way of many things now. 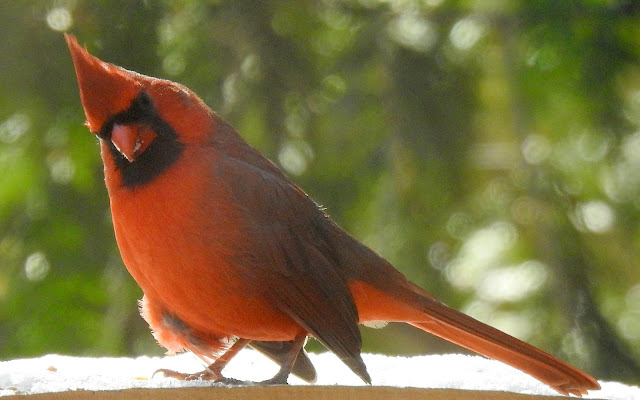 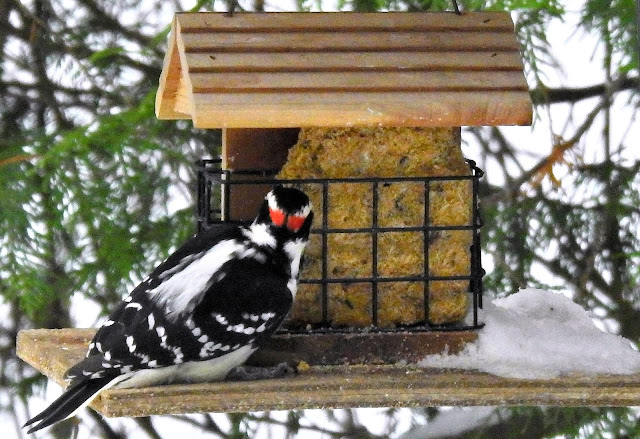 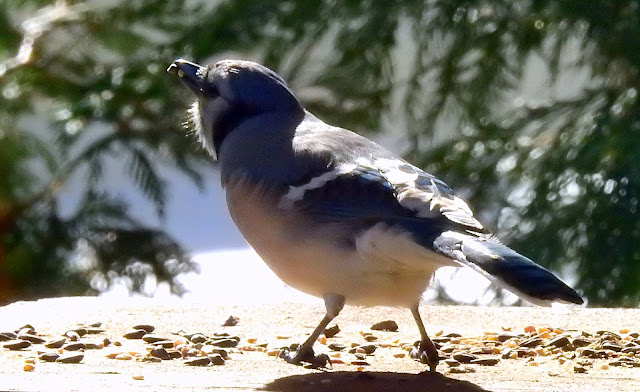 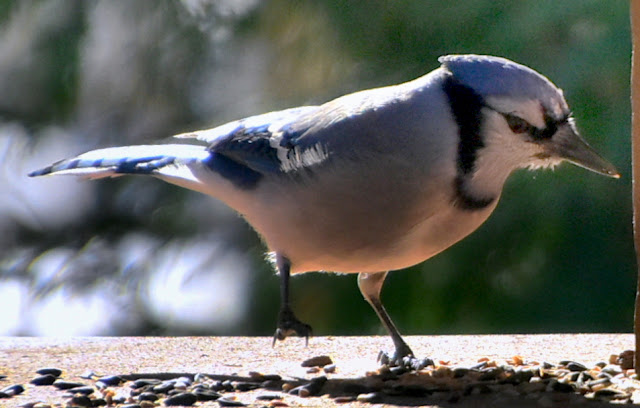 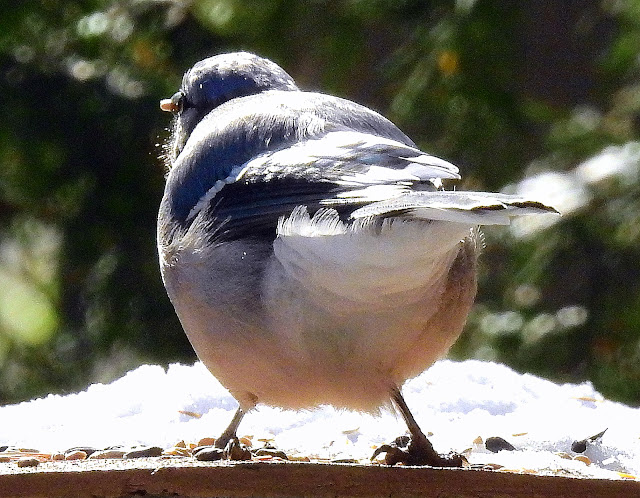 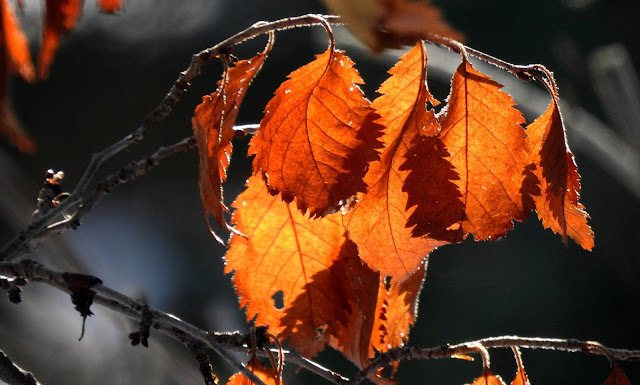 Kelly's oldest son Jason, in the area for a Christmas event dropped in for about an hour this afternoon.  Had been a long time since Kelly had seen him and probably a few years since I had seen him as well.  Jason has worked at Tim Horton's big warehouse in Guelph Ontario for over ten years now.
With sunshine finally in our front yard and using my Nikon Coolpix P900 I was able to grab a few more long telephoto bird pictures.  Despite being on the shadow side of the birds I was pleased with the detail the CP900 picked up at nearly 500mm.  I'm enjoying getting to know this camera.  Photos in tonight's post taken by the CP900 are the first and last pics, all the bird pics and all the leaves.  All Blue Jay shots were tri-poded and leaves and Cardinal shots were hand held.  ISO 800 except for Cardinal which I shot on full automatic around ISO 400.  35mm focal lengths ranged from 350mm to 1000mm.  I know, I know....doesn't make any sense to me either.
GROANER'S CORNER:((   CAT DIARY, 7 entries

DAY 752 - My captors continue to taunt me with bizarre little dangling objects. They dine lavishly on fresh meat, while I am forced to eat dry cereal. The only thing that keeps me going is the hope of escape, and the mild satisfaction I get from ruining the occasional piece of furniture. Tomorrow I may eat another houseplant. ---------
DAY 761 - Today my attempt to kill my captors by weaving around their feet while they were walking almost succeeded, must try this at the top of the stairs. In an attempt to disgust and repulse these vile oppressors, I once again induced myself to vomit on their favorite chair...must try this on their bed. ---------
DAY 762 - Slept all day so that I could annoy my captors with sleep depriving, incessant pleas for food at ungodly hours of the night. ---------
DAY 765 - Decapitated a mouse and brought them the headless body, in attempt to make them aware of what I am capable of, and to try to strike fear into their hearts. They only cooed and condescended about what a good little cat I was...Hmmm. Not working according to plan. ---------
DAY 768 - I am finally aware of how sadistic they are. For no good reason I was chosen for the water torture. This time however it included a burning foamy chemical called "shampoo." What sick minds could invent such a liquid. -------
DAY 771 - There was some sort of gathering of their accomplices. I was placed in solitary throughout the event. However, I could hear the noise and smell the foul odor of the glass tubes they call "beer." More importantly I overheard that my confinement was due to MY power of "allergies." Must learn what this is and how to use it to my advantage. ---------
DAY 774 - I am convinced the other captives are flunkies and maybe snitches. The dog is routinely released and seems more than happy to return. He is obviously a half-wit. The Bird on the other hand has got to be an informant. He has mastered their frightful tongue. (something akin to mole speak) and speaks with them regularly. I am certain he reports my every move. Due to his current placement in the metal room his safety is assured. But I can wait; it is only a matter of time.
===================
Posted by Al Bossence at 11/16/2019