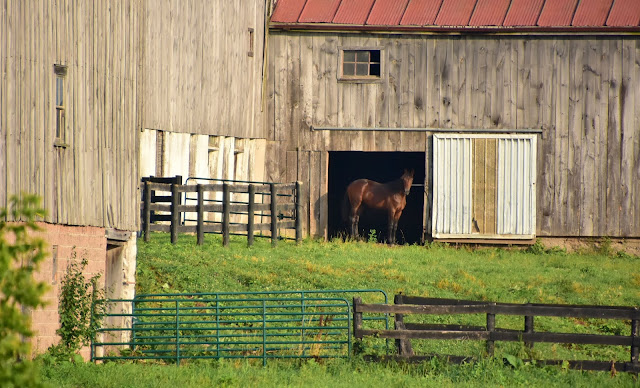 Up early, out the door and on the road by 6:15.  How nice to actually see a sunrise again.  It's been a long time.  Easy drive to London's University Hospital with very lite traffic.
After dropping Kelly off at the front door an hour later for her Doppler Ultra-Sound Pheebs and I headed straight-away out into the countryside and dusted up a few gravel roads.  I enjoy looking at all the nice horse farms west of the city and it's always a treat for me to see the softer morning's light playing it's hues across the picturesque farmlands.  A truly nice peaceful drive before we were back into London and parked near the hospital at Masonville Mall.  Ten minutes later my flip-phone rang and it was Kelly ready to be picked up.   And it was only 8:40 a.m. 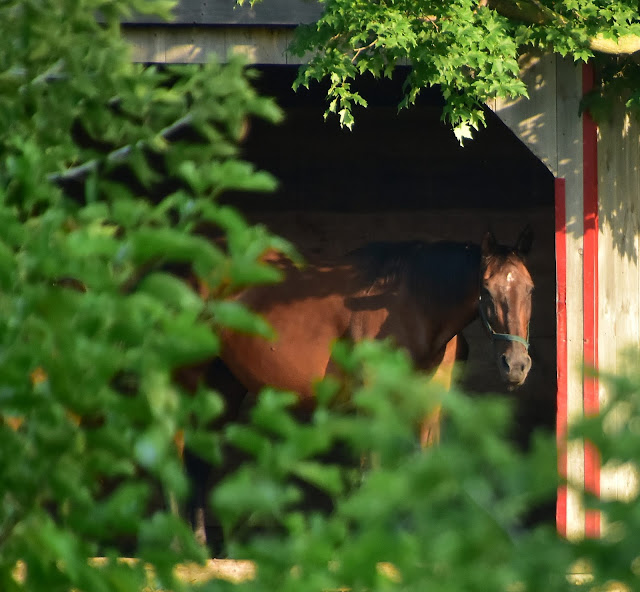 Coffee and breakfast to go at Masonville Mall's McDonalds and we were on our way home.  Seemed like the day had hardly even started as we rolled into our driveway an hour later.  Figured I had better haul out our battery mower and cut the grass before the day got any hotter.  Did that and headed inside with my shirt sticking to me. 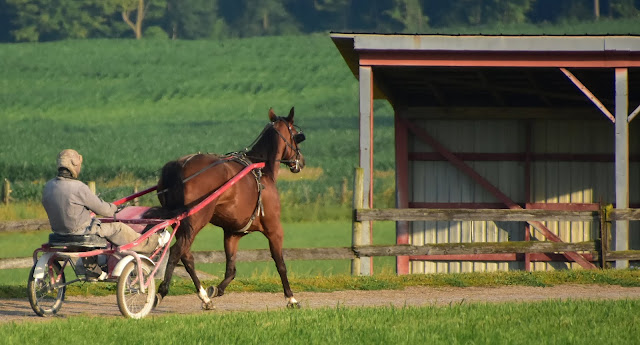 No idea when we will be able to pick up the Leisure van.  It goes in for it's safety inspection hopefully this week sometime and the van owners will let us know.  We of course are anxious to get it home and begin weaving our Southwest décor magic on it.  A little paint here, a little scrub-a-dub there, maybe a new Santa Fe counter top finish around the sink, maybe a big Saguaro Cactus in the corner.  Oh I'm sure we'll get it duded up alright and of course that is always a fun part when one first brings any kind of vehicle home.  Especially a cozy little RV like this one.  Let me see now, how's about a nice soft Durango orange with a slathering of Taos blue blending with a healthy smattering of Sonoran desert tope.  And let's not forget our colorful Mexican throw blankets and big tin Arizona Lizard.  Yep, looking forward to bringing home what will probably be our last RV.  Of course Kelly is quick to remind me that I have said that very same thing about our last three RV's as well.  Well it's gotta be the last one one of these days...…………... 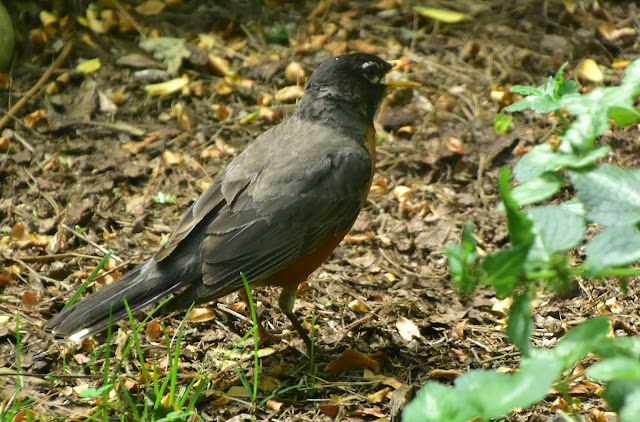 A little action in our Park this afternoon when a digging machine hit a gas line.  Thought I smelled the faint odor of gas earlier when I drove into the Park coming back from Goderich.  Several fire trucks in the Park standing by.
After 12 years our pond's water pump finally rattled to a stop so had to zip up to Canadian Tire and get a new one.  While the old pump wasn't pumping water over the little waterfall I had noticed our two resident Goldfish had become sluggish and spent most of their time hiding under the water plants.  Soon as I hooked up the new pump with it's extra water pressure they darted right over under the cascading water.  It was obvious they were truly happy as they spent hours frolicking in the bubbly waters.  Can't tell me fish don't got no feelings!!


And an Update:  Van owner Nicole Facebooked Kelly saying the Leisure Van goes in Wednesday morning for it's safety inspection.  Said we could probably pick it up later Wednesday afternoon or evening.  Coincidentally I have a Doctors appointment in Stratford for 3 p.m. and Palmerston is not too far out of the way on our drive home:))))))
GROANER'S CORNER:(( “Becoming thirsty at exercise class, Reverend Spooner drank chai tea during tai chi.”
------------------
Girl: "You remind me of the sea."
Boy: "Why? Because I'm so wild and romantic?"
Girl: "No, because you make me sick."-----------------

A local church built a new sanctuary. They moved their very fine old pipe organ to the new sanctuary. It was an intricate task that was completed successfully. The local news heralded . . . "St. Paul Completes Organ Transplant."