OKAY SO HOW DID THE PROSTATE BIOPSY GO 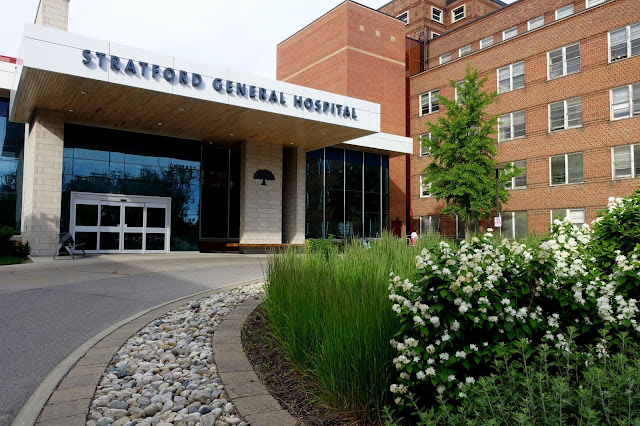 What a visual treat the forty five minute drive to Stratford's General Hospital was this morning.  I don't normally see the day at this hour anymore so I enjoyed the soft ethereal tones Old Sol cast across the landscape.  Only about ten agrees above Earth's eastern horizon sunlight cast long shadowy hues westward.
Check in time for me was 7:30 so I was there at 7.  Kelly and Pheebs pulled away in the Jeep as I headed inside.  No need for Kelly to come in.  Not many people around at that hour, not even in the hospital.  Found my check-in spot on the main floor, (Imaging) took a number (49) and sat down waiting to be signed in.  I think in cases like this it is generally the 'waiting' that bugs me most.  Let's just get in there and get the job done.  The sooner I can get in the sooner I can get out.  Yesireeee, let's get er done and so it was with the calling of my number that I was led further into the hospital's inner sanctum and a change room.
With two blue not so flattering hospital gowns plus my Robin's egg orange tipped blue socks and brown running shoes on I sat in an inner waiting room knowing the next time I moved it would be right to the prostate biopsy room.  I always find these last few minutes the hardest to wait out.  It's not too late yet to grab my little bag of clothes, slip into them, and run screaming from the hospital.  I heard the number 49 called by a friendly nurse coming down the hall. Oh-Oh I thought, there go my escape plans.
Now I won't bother you with the details of a prostate biopsy which can all be found on the internet but I can tell you about some of the mental and physical feelings I had.  First and foremost I have to say with the exception of a mild prick or prod here and there it was a painless 15 minute procedure.  A bit uncomfortable of course but nothing to use a lot of adjectives about.  As sometimes happens when I walked into the little room I was asked by the accompanying nurse it I minded a young female intern to witness the procedure.  It was her first time seeing this and I said, 'sure Okay'.  Of course I felt more sorry for her than me.
No time was wasted and within a couple minutes Dr. Bukala with some kind of probing instrument had me 'plugged in'.  He told me he would first freeze the prostate area with a needle.  Anytime I'm in the same room that the word needle is used my life flashes before my eyes.  I never felt either one of those two needles.  Another two or three minutes passed while the freezing took hold before the 'snipping part began.  He told me I would periodically hear a clicking sound.  Over the next seven or eight minutes at maybe twenty second intervals I would hear an audible click/clack followed instantly by sometimes a pinch and sometimes nothing.  Three or four of these caused me to flinch a bit but nothing painful.  Good thing nobody sneezed or I would have been four feet off the table.  I could see a red lit digital clock in the darkened room and it was 8:10 a.m.  I'm guessing there was about a dozen clicks overall and that was it.  I was done.
Now here's the part I found most amusing.  The whole time this procedure was taking place Dr. Bukala, the nurse, and the intern were talking about swimming and the Doctor had the girls laughing about his exploits in the water.  He's a non swimmer and upon entering a pool his legs carry him straight to the bottom.  Well I sure could identify with that so upon leaving the room I turned to the nurse and said, 'well I learned something this morning and it's good to know that I am not the only one who has that 'heading for the bottom' problem when entering the water'.  Well of course that got a chuckle but when I said to them, 'and I was in the Navy years ago too so figure that one out, that even got a chuckle out of Dr. Bukala who is usually a pretty straight faced serious guy.  I actually enjoyed listening to his tale of water woes to the attendants and it was nice to see another side of him.
Exiting the room in flowing robes of blue I was placed in a chair for fifteen minutes to make sure I wasn't going to fall flat on my face.  Of course had I done so it might have helped my face.  With my uneventful fifteen minutes up the nurse led me down the hall as I headed back to the change room, re-donned my street attire and headed for the lobby.  With flip-phone in hand I called Kelly who was waiting half a block from the hospital in a parking lot at the TJ Dolan (Old Grove) nature area.  Three minutes later I was in the passenger seat and we were on our way.  First stop was McDonalds for a coffee and carrot muffin and from there I felt good enough to drive us all home. Beautiful morning and the way we go there was hardly any traffic. 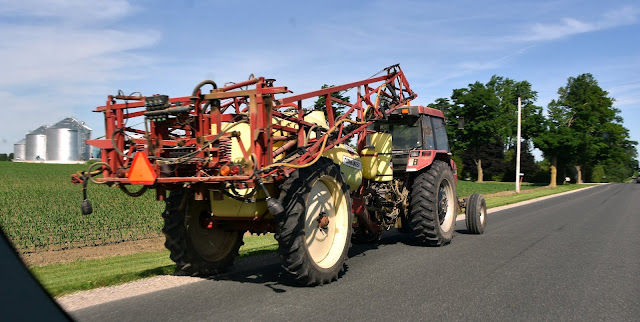 With our pleasantly cool A/C running I stayed in all afternoon.  Why go out in that heat and miserable humidity and get all sweaty and sticky when one doesn't have to.  And besides, with a poor night's sleep (oh gee I wonder why) it was just nice to be tipped back in my cool recliner reading a bit and catching a few zzzzzzzzz's between lines:))

And a good word about medical folks in general from my experiences over the past seventy four and a half years.  For as long as I can remember I have always been impressed with the friendly manner of those trained medical people in hospitals or medical centers.  Every one has always been so helpful right from receptionists to Doctors, Nurses, Nurse Practitioners, Aides, Butchers, Bakers, and Candle Stick Makers.  Despite my grouchy manner at times I never bring that side of me to any kind of medical appointment.  Those folks are there to help me and I am there to try and make their day easier as well.  No complaints from me about the medical profession and staff.  Not even hospital food...………..
Oh and upon leaving our Park this morning Kelly spotted a note hanging on the chalkboard of our mail room.  We stopped and she went in to read it.  Seems that our Park did not change hands on June 24th as scheduled.  Negotiations are still on-going and everything will remain the same until further notice.  The note was signed by our current Park owner.  'Hmmmmmmmmm'. 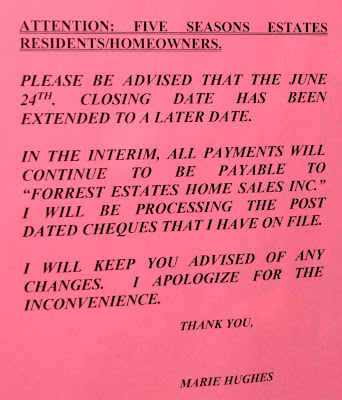 GROANER'S CORNER:((  Joe is at the Pearly Gates waiting to be admitted while St. Peter is leafing through his files to see if Joe is worthy of entry.  "Joe," says St. Pete, "I can't see that you've done anything really bad in your life but I can't see that you've done anything really good that would qualify you for Heaven. Can you tell me ANY good deed you've ever done?" Joe thinks for a moment and says "Sure. I was driving through a bad part of town when I saw about 50 biker guys assaulting this little old lady. I slammed on my brakes, grabbed a tire iron, and walked up to this big guy who seemed to be the leader.  All these guys let the old lady go and formed a circle around me to see what I was gonna do. I laid that tire iron right across the big guy's head and he dropped like a stone. Then I turned and yelled to the rest of them. "If I ever see you guys around this town again, I'll give you a real lesson in pain."  "Wow" says St. Peter, "I guess you really do qualify for Heaven. Tell me, when did this happen?" "Oh", says Joe, "about two minutes ago."
--------------------------
- Three years ago my doctor told me I was going deaf... I haven’t heard from him since.