SCENIC VIEWS AND TUMBLING WATER ALONG THE MAITLAND TRAIL 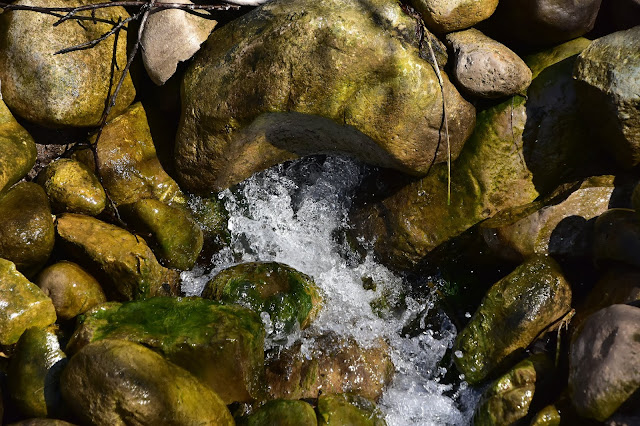 I like how dawn creeps through our east facing living room window earlier and earlier each morning.  Some days it's simply a soft white slowly spreading light and other mornings it's a fiery pinkish orange sunrise flaming it's way through our Parks pine trees.  By the time Pheebs and I rolled out about 8 a.m. skies were already bluing up. 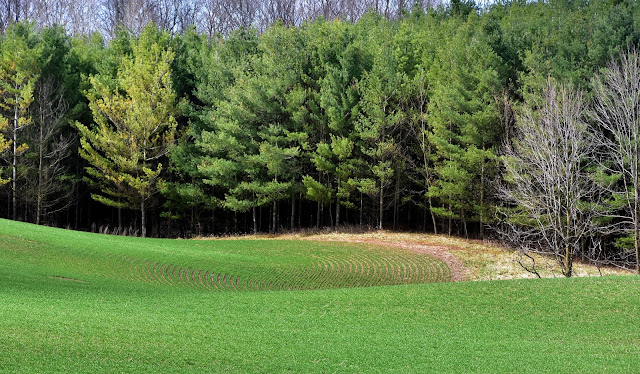 With a yummy homemade morning glory muffin and coffee in hand Pheebs and I slipped up north of Goderich this morning and got ourselves onto the Maitland Trail near the Tiger Dunlop tomb.  The trail is an old CPR (Canadian Pacific Railroad) line which has been made into a rails to trails project.  Walking is easy and it's great for joggers and bicyclists.  The trail along the section of old rail line we were on is wide, hard packed, and flat enough for battery powered wheelchairs Stew. 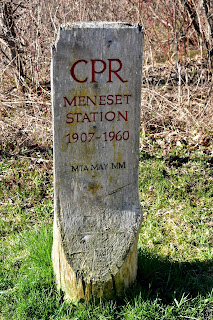 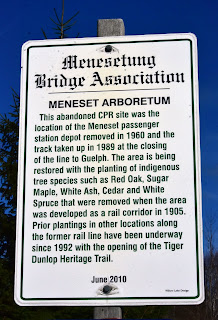 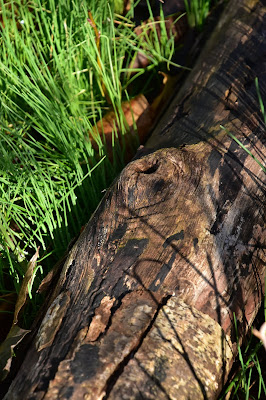 Scenic views across the Maitland Valley to the town of Goderich on the other side.  At the bottom of the valley flows the Maitland River west into Lake Huron. With only one jogger going by and an older fella on a balloon tired bicycle just leaveing we had the quiet Spring trail all to ourselves.  Couldn't help buy let my imagination wander and picture old steam locomotives chug chugging their way along here.  At the end of the line further west down the harbor this rail line ended at another train station which has been located a few hundred yards away and is now the Beach Street Station 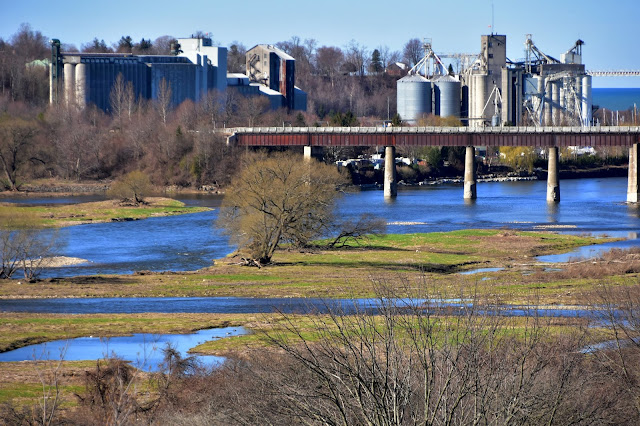 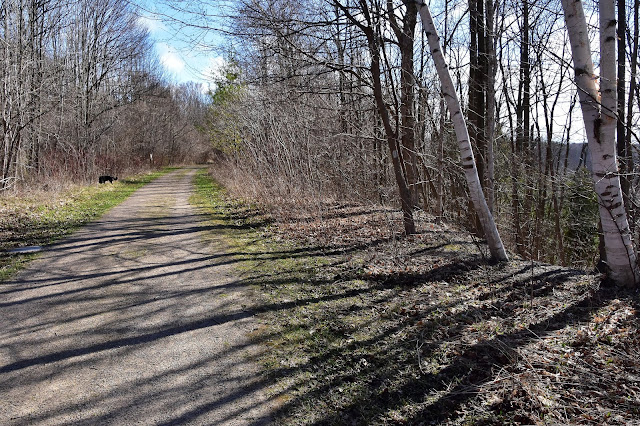 While walking west along the Maitland Trail I could hear water running somewhere.  The rail line cuts across a steep embankment and back in the early 1900's when the line was put in rail crews had to deal with the water run-off coming down the north bank above the track bed.  Cement waterways had to made to direct the flow of water and some of those water conduits and newer metal pipes are still in use today directing water under the tracks to spill down the southern embankment in streams of tiny waterfalls.  That water makes it's way to the Maitland River nearby which in turn flows out into Lake Huron. 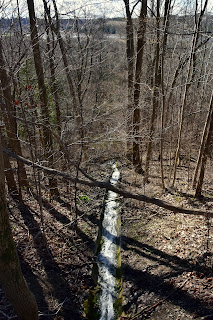 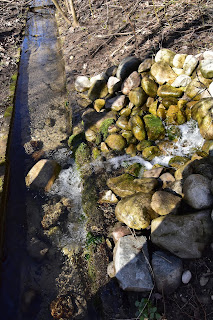 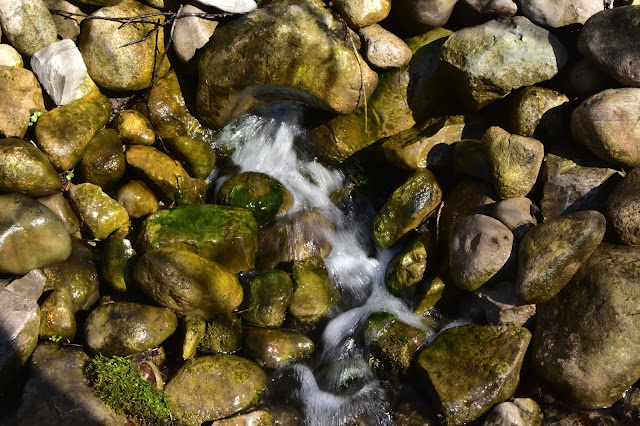 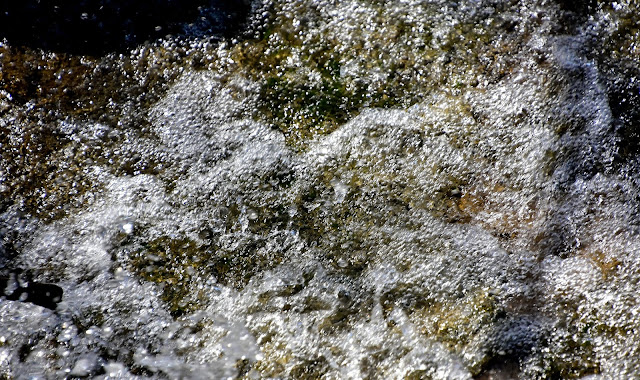 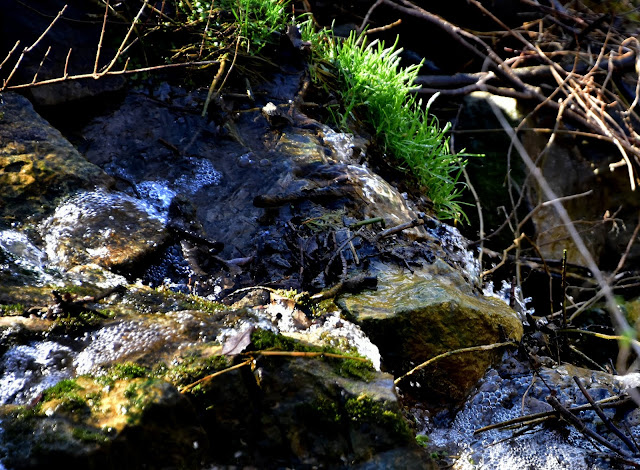 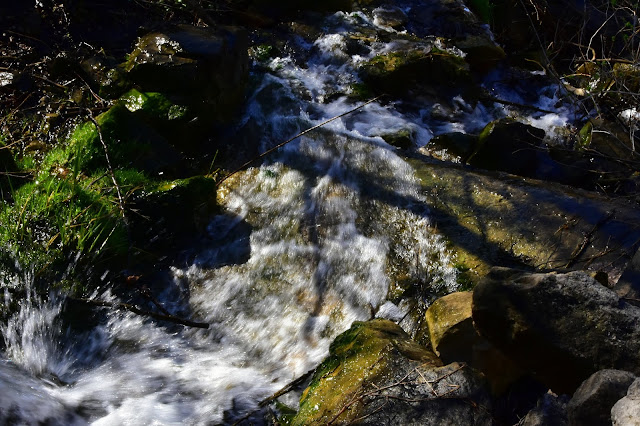 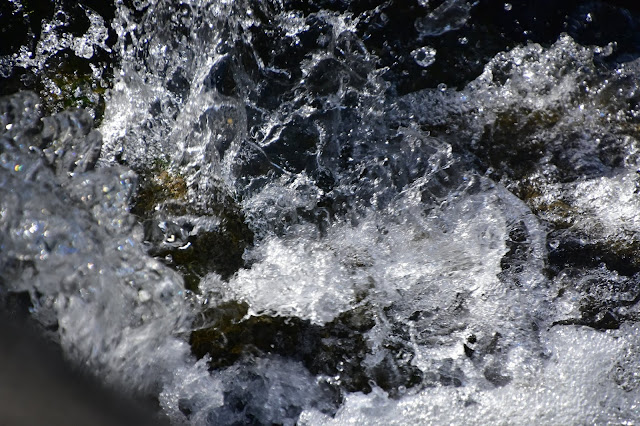 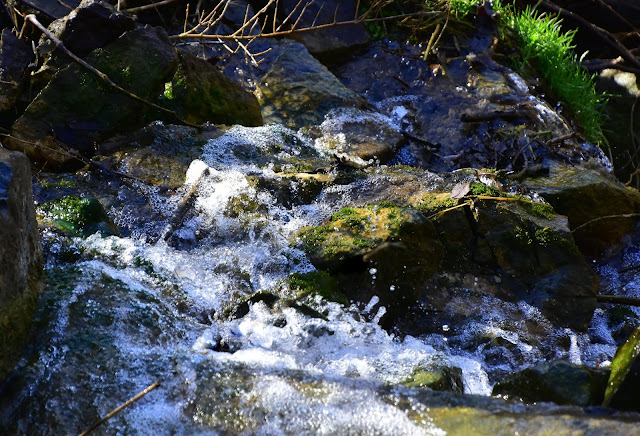 Home by 10:30 and under sunny but cold air skies I swapped my walking hat for my working hat and tackled the last of my shed cleaning projects.  Things are now cleaned up and organized for the season again.  Bugs me when things are messy and stuff is out of place but I have nobody but myself to blame for letting things get that way.  Our main problem is that we simply have way too much stuff and 'if' we were smart we'd have ourselves a big garage sale or two......or three. 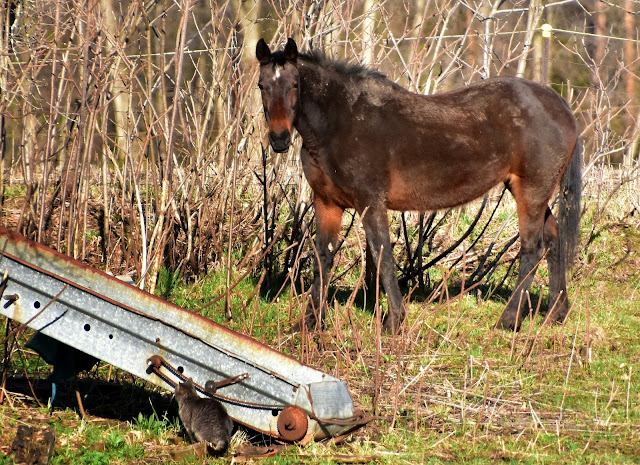 Been back from our winter getaway to the Southwest about a month and a half now and we're still pretty happy to be home.  Our days of spending long periods of time in an RV are behind us but that's Okay.  We certainly enjoyed it while it lasted and how fortunate we were to have the many Snow Birding years we did.  But don't count us out just yet.  Things are in a state of change for us and the option of heading south next winter is still on the table.  If there is a will there is a way.  We'll see what happens and if we do go it will be for a shorter period of time like last year and probably in a smaller RV.  We haven't listed our Motorhome for sale yet...………...... 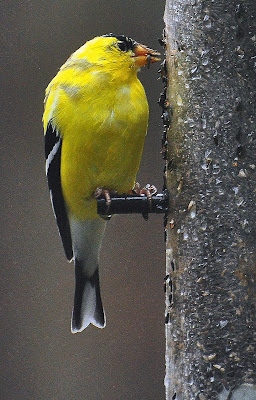 With crazy area Real Estate prices through the roof these past few years making a move  unaffordable for us now we still haven't totally given up on moving some day as evidenced by the touch of excitement an area 4 acre property with house and barn generated a couple days ago.  Way out of our price range of course but how nice it was to feel that dormant pilot light of excitement catch fire for a few minutes while we looked at pictures and read the ad.  We have a nice little place here in the Park but I still long for a small manageable country property with big starry night skies, visible sunrises and sunsets, a forest, a creek, a sweeping view, and most important of all for me, 'no noisy neighbors'. I'm finding the older I get the less tolerance I have with people.  Both Kelly and I are loners and we fit well together.  She isn't to the level of Hermitude I am yet but of course I have a few years on her.  Don't know how much time I have left but it's still way too early to stop dreaming..................... 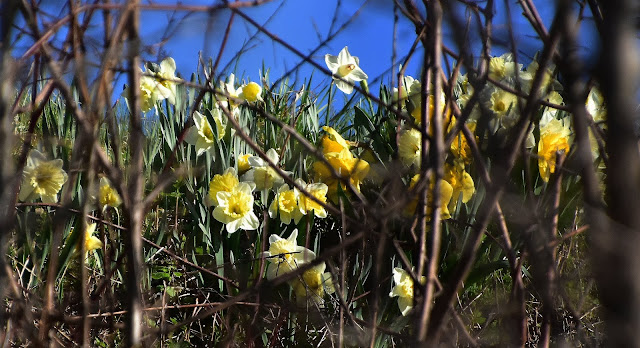 GROANER'S CORNER:((  And This Is The Way It Happened In Canada Years Ago::

THE ORIGINAL VERSION
The ant works hard in the withering heat all summer long, building his house and laying up supplies for the winter. The grasshopper thinks he's a fool and laughs and dances and plays the summer away. Come winter, the ant is warm and well fed. The grasshopper has no food or shelter so he dies out in the cold.

MODERN CANADIAN VERSION The ant works hard in the withering heat all summer long, building his house and laying up supplies for the winter. The grasshopper thinks he's a fool and laughs and dances and plays the summer away. Come the winter, the shivering grasshopper calls a press conference and demands to know why the ant should be allowed to be warm and well fed while others are cold and starving.

The CBC shows up to provide pictures of the shivering grasshopper next to the ant in his comfortable home with a table filled with food. Canadians are stunned by the sharp contrast. How can it be that, in a country of such wealth, this poor grasshopper is allowed to suffer so?

Then a representative of the NAGB (The national association of green bugs) shows up on The National and charges the ant with green bias, and makes the case that the grasshopper is the victim of 30 million years of greenism. Kermit the Frog appears on the Nature of Things with the grasshopper, and everybody cries when he sings "It's not easy being green.

"Jean Chretien makes a special guest appearance on the CBC Evening News to tell a concerned public that they will do everything they can for the grasshopper who has been denied the prosperity he deserves by those who benefited unfairly during the Reagan/Thatcher summers. Sheila Copps exclaims in an interview with Peter Mansbridge that the ant has gotten rich off the back of the grasshopper, and calls for an immediate tax hike on the ant to make him pay his "fair share."

Finally, the Liberals draft the "Economic Equity and Anti-Greenism Act," retroactive to the beginning of the summer. The ant is fined for failing to hire a proportionate number of green bugs and, having nothing left to pay his retroactive taxes, his home is confiscated by the government. John Turner gets his law firm to represent the grasshopper in a defamation suit against the ant, and the case is tried before a panel of federal hearing officers that Chretien appointed from a list of single-parent welfare moms who can only hear cases on Thursday's between 1:30 and 3 PM.

The ant loses the case.

The story ends as we see the grasshopper finishing up the last bits of the ant's food while the government house he's in, which just happens to be the ant's old house, crumbles around him since he doesn't know how to maintain it.

The ant has disappeared in the snow.

And on the TV, which the grasshopper bought by selling most of the ant's food, they are showing Jean Chretien standing before a wildly applauding group of liberals announcing that a new era of "fairness" has dawned in Canada.
===================