It was a race against the coming rain to get my new bird feeder installed in our front yard.  In fact looking ahead at the 14 day weather forecast it is calling for rain 'every day'. Having glued and screwed the 3 main pieces together and sloshed a last coat of outdoor paint on it Monday I climbed my stepladder earlier this morning and placed the bird station atop the old post where I had just removed the old warped platform.  A bit of shuffling into place, a few shims to level it up, and then a few screws to anchor it in place.  With a light rain already coming down I poured some birdseed onto the stand and quickly headed for the house.  Didn't take long for a pair of Cardinals to be the first ones checking out the new facilities.  I was happy to see that despite the increasing rain they were able to have themselves a dry breakfast under a protective roof.  And I could see they were quite happy as well.  Mission accomplished:))))) 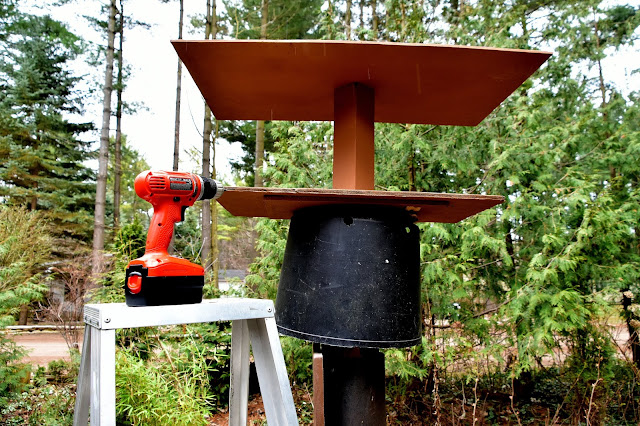 Earlier in the morning before working on my bird station project and for a change of pace I decided to drive our usual Bayfield country Jeep route in reverse.  Exiting our Park to the east we ambled along for awhile later entering Bayfield from the south and somewhere in between we managed us a short walk under damp gray skies.  It certainly has been a cold wet Spring so far:(( 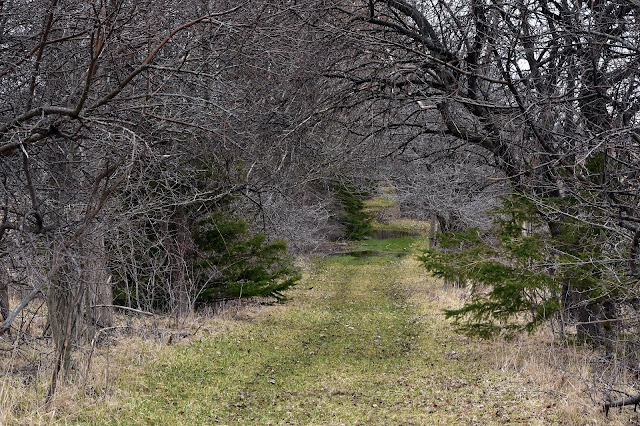 Back through Bayfield we swung down around the harbor on our way home.  It seems there isn't much in the way of weather that ever deters fishermen.  I marvel at their steely patience. 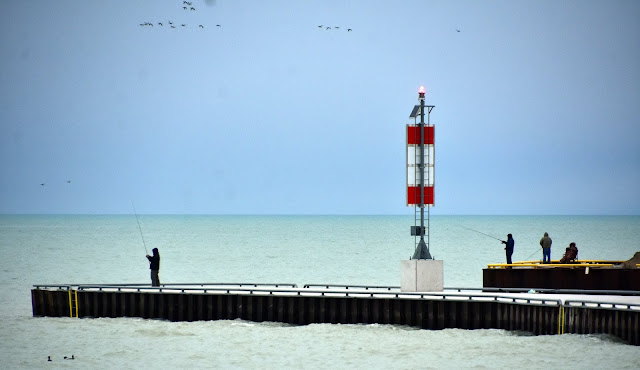 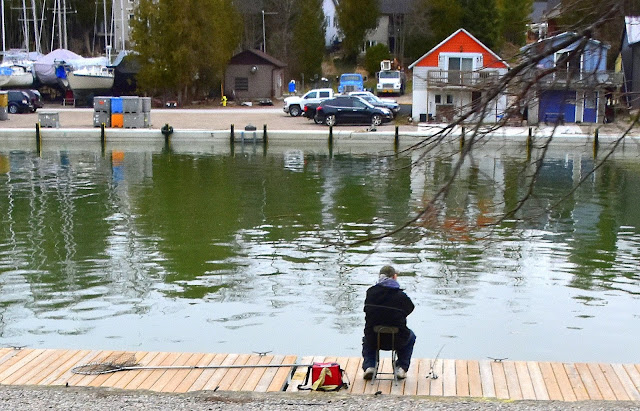 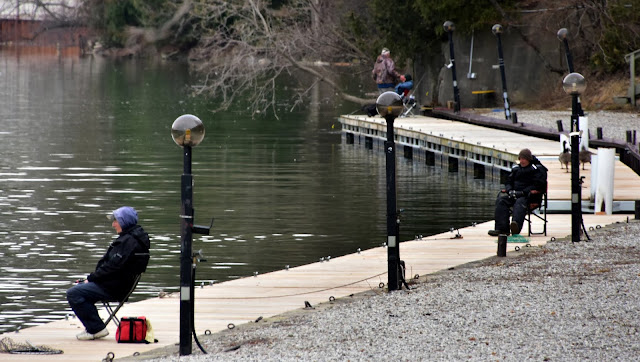 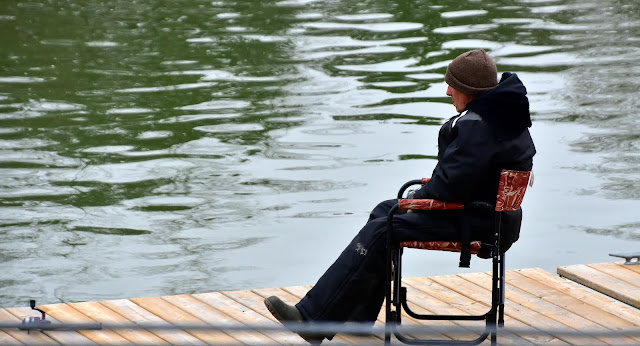 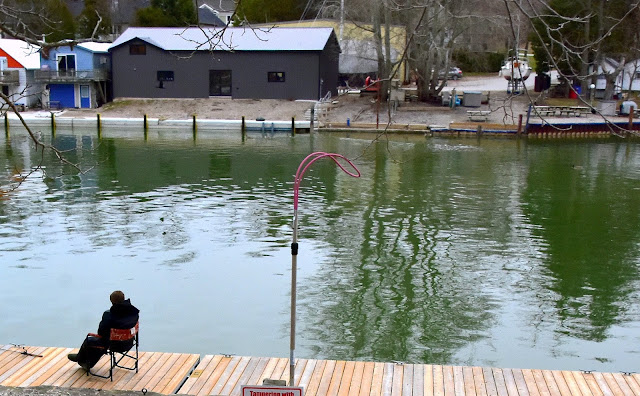 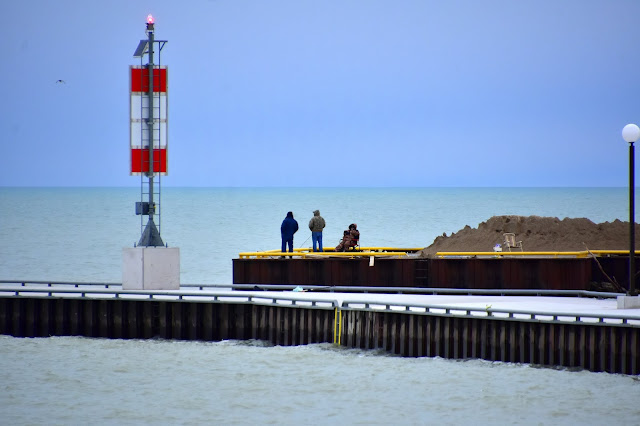 Rained steadily for the rest of the afternoon and I was surprised to find myself fast asleep in my sunroom recliner for a couple hours.  If I thought two afternoon naps a few days ago a bit unusual I certainly have no explanation for today's complete dose off. 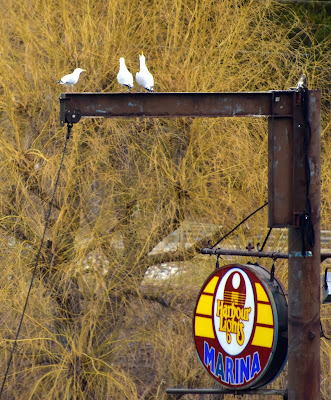 All is momentarily quiet here on the Motorhome front.  I'm waiting for warmer weather to finish up cleaning all the glass.  Our decision to sell it is still the same and the only thing left to do is replace the cracked passenger side windshield.  Whether we'll actively look for a smaller RV is still up in the air.  If we came across 'the deal of the century' that was just right for us I'm thinking we'd probably grab it.  We'll see what happens, there's no rush. 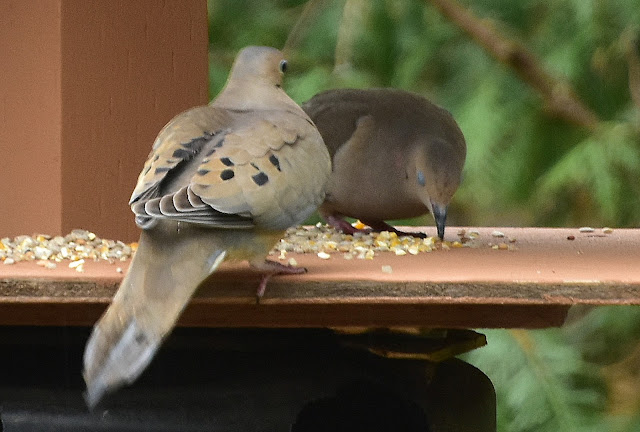 Sitting at my school desk one day over 60 years ago I felt two hands placed on my shoulders gently pulling back.  It was Mr. Douglas's hands and he was my great 5 teacher.  I remember him bending over and quietly telling me to try and keep my shoulders pulled back.  He said I was 'round shouldered'.  And that was the very first time I ever knew I did not have good posture.  Never thought too much about it over the following bunch of decades until these last 7 or 8 years or so when Kelly has occasionally brought it to my attention.  I'm at the point now where I no longer need any reminding as I am well aware almost daily of my bent over 'round shoulder' posture.  I don't suppose sleeping in my recliner every night for the past three years is doing my posture any good either.  Oh well at least I see more things on the ground now than I used to.  Maybe one of these days I'll find a $100 bill or something. 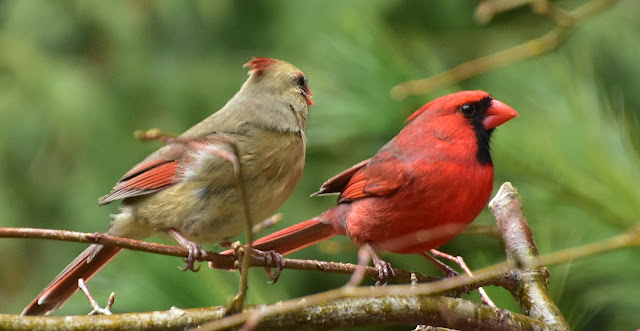 GROANER'S CORNER:(( Political wisdom::
1) Suppose you were an idiot. And suppose you were a member of Congress. But then I repeat myself. - Mark Twain
2) I contend that for a nation to try to tax itself into prosperity is like a man standing in a bucket and trying to lift himself up by the handle. - Winston Churchill
3) A government which robs Peter to pay Paul can always depend on the support of Paul. - George Bernard Shaw
4) A liberal is someone who feels a great debt to his fellow man, which debt he proposes to pay off with your money. - G Gordon Liddy
5) Democracy must be something more than two wolves and a sheep voting, On what to have for dinner. - James Bovard, Civil Libertarian (1994)
6) Foreign aid might be defined as a transfer of money from poor people in rich countries to rich people in poor countries. - Douglas Casey, Classmate of Bill Clinton at Georgetown University
7) Giving money and power to government is like giving whiskey and car keys to teenage boys. - P.J. O'Rourke, Civil Libertarian
8) Government is the great fiction, through which everybody endeavors to live at the expense of everybody else. - Frederic Bastiat, French Economist (1801-1850)
9) Government's view of the economy could be summed up in a few Short phrases: If it moves, tax it. If it keeps moving, regulate it. And if it stops moving, subsidize it. - Ronald Reagan (1986)
10) I don't make jokes. I just watch the government and report the facts. - Will Rogers
11) If you think health care is expensive now, wait until you see what it costs when it's free. - P.J. O'Rourke
12) In general, the art of government consists of taking as much money as possible from one party of the citizens to give to the other. - Voltaire (1764)
13) Just because you do not take an interest in politics doesn't mean politics won't take an interest in you. - Pericles (430 B.C.)
14) No man's life, liberty, or property is safe while the legislature is in session. - Mark Twain (1866)
15) Talk is cheap... except when Congress does it. - Unknown
16) The inherent vice of capitalism is the unequal sharing of the blessings. The inherent blessing of socialism is the equal sharing of misery. - Winston Churchill
17) The only difference between a tax man and a taxidermist is that the taxidermist leaves the skin. - Mark Twain
18) The ultimate result of shielding men from the effects of folly is to fill the world with fools. - Herbert Spencer, English Philosopher (1820-1903)
19) What this country needs are more unemployed politicians. - Edward Langley, Artist (1928 - 1995)
20) A government big enough to give you everything you want, is strong enough to take everything you have. - Thomas Jefferson
=================