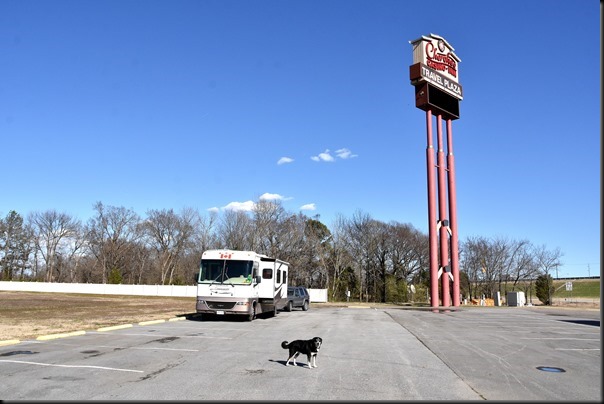 HOME BASE FOR THE NIGHT

Even with our attention focused keenly on weather conditions this past week we were caught flat footed in the middle of the night by a fast moving storm front packing high winds and rain.  It hit us broadside with with a vengeance carrying some of the heaviest wind gusts we’ve ever experienced.  Managed to get our large slide in just before some of the heaviest gusts hit.   At 5 a.m. it was as if someone flipped a switch and turned off the big blow…..temporarily.  Garbage can lids scattered across the Walmart parking lot.  Strong gusting winds were soon back and they were coming from the west so for us it meant a nice tail wind again today as long as we kept heading East.  And that turned out to be the rub………………..

Think it was somewhere around 8 a.m. when we rolled out of Weatherford on I-40  heading East for Okalahoma City.  Had it not been a Saturday morning we might not have gone that way but knowing traffic would be lighter we chose that route.  Swung around south of Oklahoma City using the 44/240 by-pass.  I knew once we headed south on 44 we would be in for hell with the wind….and we were.  Had it been a weekday with heavy traffic we could have been in trouble but it wasn’t so we weren’t.  The bad crosswinds were gone again soon as we made the swing onto 240 east by the Will Rogers Airport.  Little did we know we would make a navigational error a little while later and those crosswinds would be back determined to destroy us. 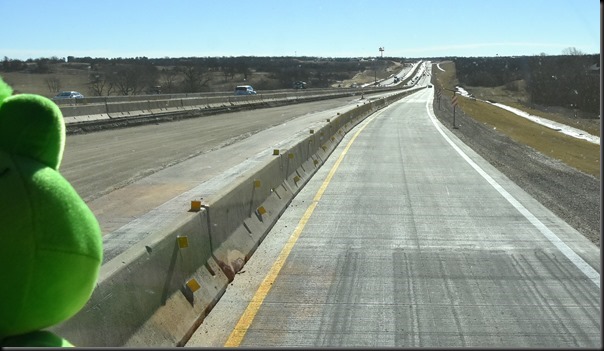 Overall it was a nice driving day with clear overhead skies and light traffic for the most part.  We were approaching Henryetta Oklahoma when we saw a McDonalds sign and decided to slip in for a coffee pit stop.  I wheeled off the next exit ramp……and right onto the Indian Nation Turnpike.  “Arrrgggghhhh!!!!’  We were cooked and there was no turning around and here’s the worst part.  The Turnpike headed south so we were instantly at the mercy of those heavy duty crosswinds again.  Saw a sign for a town 38 miles away.  We were not happy campers at the mercy of those winds plus it was very hilly with forests on both sides of the turnpike causing sudden wind tunnels.  It was touch and go and we couldn’t turn around.  Pulling over to the side of the road wouldn’t have helped either.  Now to add insult to the wrong turn and threatening winds we see a toll booth ahead.  Yep, we had to pay $4.50 and the not so friendly guy said we couldn’t turn around for another 10 miles.  Pulling away from the toll booth we spotted a hole in the fence so to speak leading to another road which led to a proper turnaround.  Without further adieu we slipped through the well traveled hole in the wall and two minutes later we were turned around and headed the 11 miles back to I-40.  Now the crosswinds were hitting us on the other side of the coach trying to dump us off the right side of the road.  We knew if we could tough it out for the 11 miles we would be back on I-40 again heading East with a slightly burpy tailwind.  We joltingly made it to I-40 and an hour later we tiredly pulled into the Cherokee Casino at the east end of Fort Smith Oklahoma.  This had been our pre-planned destination for the day and we were sure thankful to find a spot in the Casino parking lot and shut it down.  Winds were still bad but at 70F it at least was a warm wind.  By 5 p.m. those bad winds had dimished to a mere whispering breeze.

WITH TODAY’S HIGH WINDS WATER ON LAKE EUFAULA WAS CHOPPY

It was tempting while west of Oklahoma City this morning to head north up to I-44 and boogy for home via St Louis but we decided to stick to our travel plans by continuing east in warmer weather.  We do have a destination in mind so we’ll wait until Sunday to see if we reach it.  Maybe a tad longer than the I-44 St Louis route but as you know we do prefer the lesser traveled Interstates. 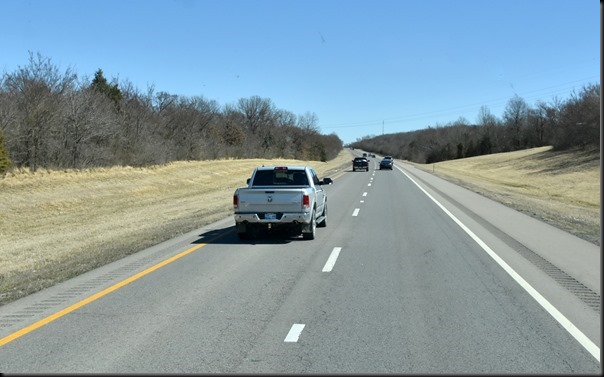 EVEN WITH NO LEAVES THE TREES STILL LOOKED GREAT

Our overnight spot for tonight is the Cherokee Casino on the west side of Fort Smith Arkansas.  By the looks of it we are only a few miles from the Arkansas State Line and Sunday we just might find ourselves in the Ozarks.  Li’l Abner country as I recall.  Wonder how many people remember or saw the 1959 Li'l Abner movie.  I did:))  Not our first time in Fort Smith.  Back in late December of 04 on our way to Big Bend National Park Texas in our second of 4 Class C’s we actually got ourselves lost in the Ozark Mountains along the way.   Wasn’t until we stumbled into Fort Smith Arkansas that we knew for sure where we were. 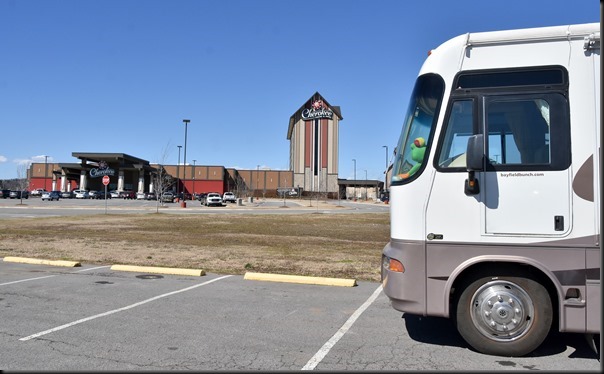 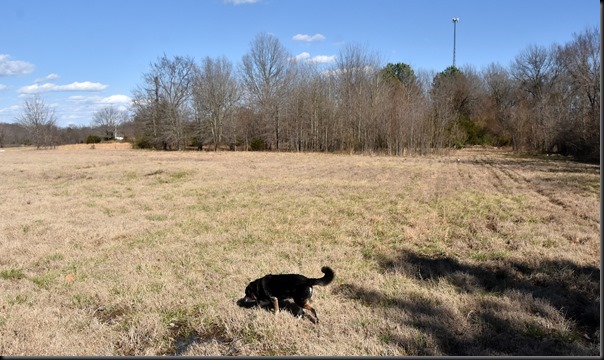 ON OUR AFTERNOON WALK PHEEBS AND I SURE COULD HEAR A LOT OF CROAKING FROGS ALONG THAT TREE LINE OUT THERE AND WE HEARD A KILLDEER AS WELL….YEP, SPRING’S WELL UNDERWAY IN THESE HERE PARTS

ATTORNEY: What gear were you in at the moment of the impact? WITNESS: Gucci sweats and Reeboks.

A little girl was in church with her mother when she started feeling ill. "Mommy," she said, "can we leave now?""No," her mother replied."Well, I think I have to throw up!" exclaimed the girl."Then go out the front door and around to the back of the church and throw up behind a bush," said her mother.After about sixty seconds, the little girl returned to her seat. "Did you throw up?" her mother asked."Yes," the little girl replied."How could you have gone all the way to the back of the church and returned so quickly?" her mother asked."I didn't have to go out of the church, Mommy. They have a box next to the front door that says, 'For the Sick.'"