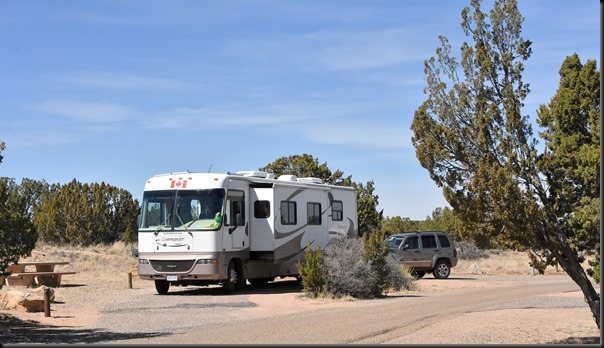 FOUND US A QUIET PEOPLE FREE PLACE FOR THE NIGHT

Not wanting to rush off into the Albuquerque morning rush hour traffic we instead took the Jeep and headed out into the countryside about 4 miles northeast of the Enchanted Trails RV Park.  Decided to do our morning walk along a trail at the Albuquerque Volcanic Field.  We did that but didn’t go as far as any of the small volcanic mounds.  We were back to Enchanted Trails about 40 minutes later. 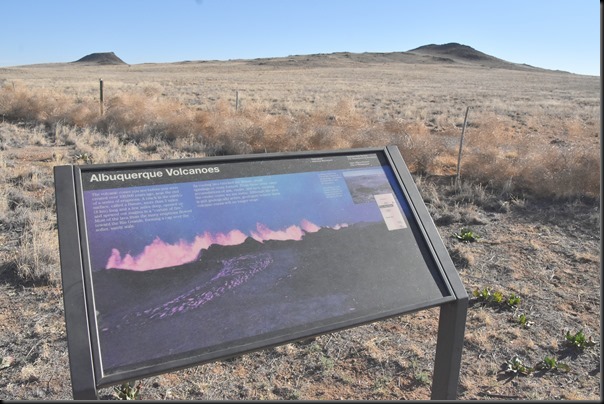 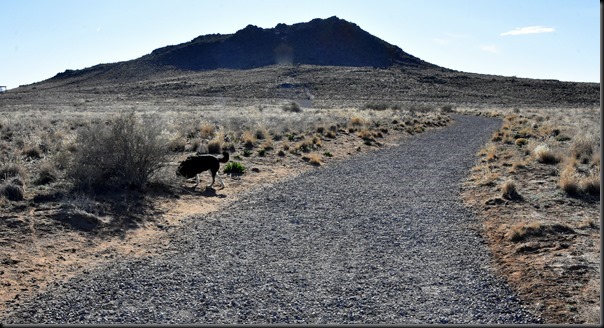 EASY WALKING ALONG THIS WIDE PATHWAY 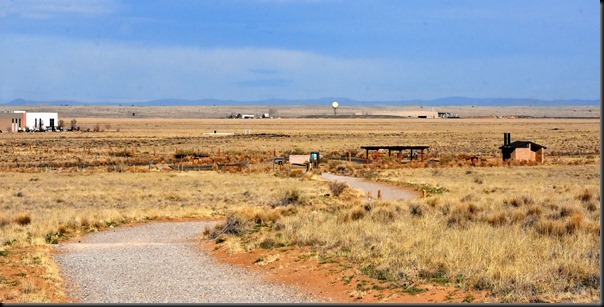 LOOKING WEST ACROSS NEW MEXICO IN THE DIRECTION OF ARIZONA 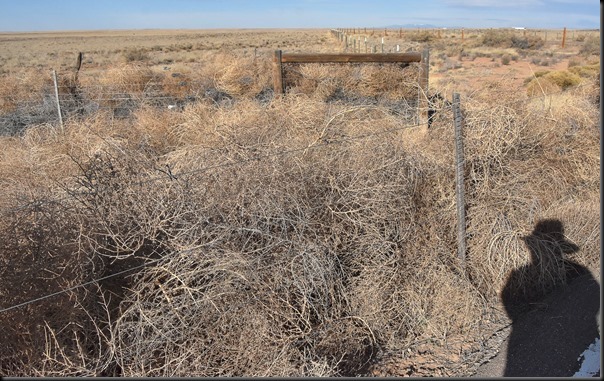 We hooked up the Jeep and had the big wheels rolling  east out of Enchanted Trails at 9:25.  Clear blue sunny skies and with the wind at our backs as we rolled right through Albuquerque New Mexico.  Traffic was lighter than expected and we were soon climbing into the Sandia Mountains.  We were familiar with the steady altitude gain up and over the mountains and never had any problems.

A FINAL WAVE TO CAMPING WORLD AS WE WENT BY 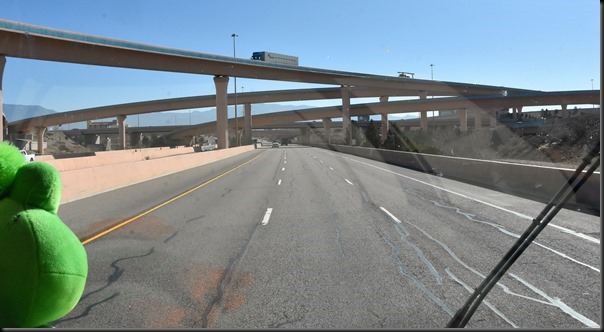 HEADING EAST ON I-40 THROUGH ALBUEQUERQUE  NM APPROACHING THE MAJOR I-25 INTERCHANGE…..NOTICE THE LACK OF TRAFFIC 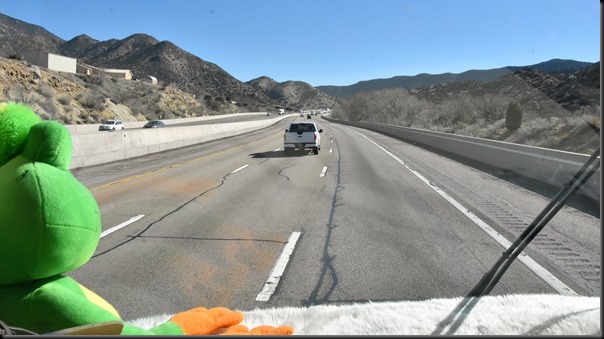 As we slipped out onto the rolling plains I watched the Sandia Mountains slowly disappear in my driver’s side window.  My thoughts are always the same, will I ever see my beloved mountains again:((

Not much happening along I-40 as we plodded east but watching the scenery roll by I knew this was the easy end of our long journey home.  The further one goes east the busier it gets and in a few days or a week we will once again be into that chaotic manic mash of eastern traffic. 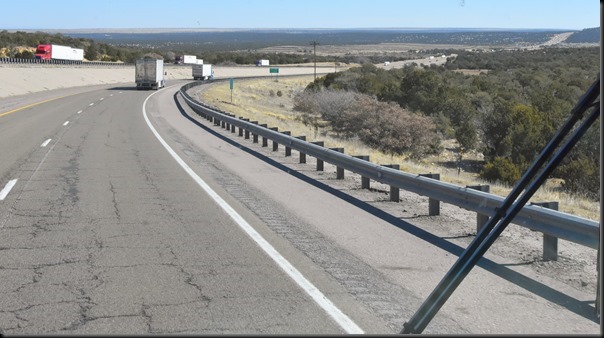 Our destination today was the Santa Rosa Lake State Park about 8 miles north of Santa Rosa New Mexico.  Seeing how it is ‘off-season’ for the Park there were not many people here.  A few fellow RV’ers scattered about and no State Park employees.  Although confusing we did find a pull-through site nestled in amongst Pinion Juniper trees and if it weren’t for the trees we could easily see the lake.  Nobody close enough to bother us or we them.  Now I call that a win/win situation.  And checking our rear passenger side outside dually wheel we were happy to see the fluid leaking has stopped.  Camping World’s tightening of the flange bolts may just have solved the problem.  Touch wood of course.

We only drove about 150 miles today and I feel like we’ve driven about 550 miles.  Don’t know what it is draining my energy so much but it sure is frustratingly disappointing.  Seems all I feel like doing is stretching out in my cushy leather recliner and staying there.  Might have to get a chocolate milkshake IV drip line put in my arm.  At this rate it could be 3 months before we get home:(( 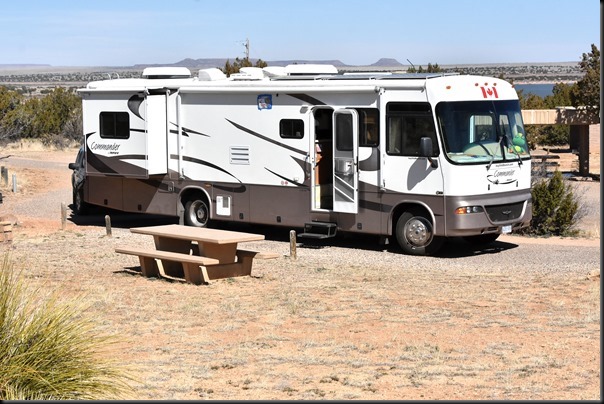 There have been a handful of times over the years following stressful RV occasions where I have quietly vegged out in the coach tipped back in a favorite chair.  With sunshine wafting through our rig’s windows this afternoon encompassing  me in a calming serene tranquility I briefly felt again the fleeting hand of healing.  Don’t know where we’ll be tomorrow but this afternoon for a few moments I was content to be right where I was…………………… 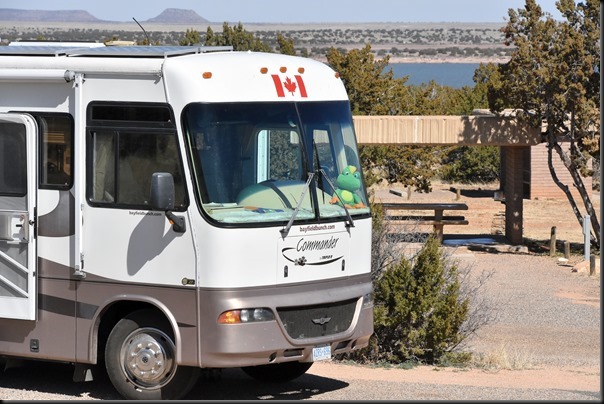 GROANER’S CORNER:(( A man has been on Death Row for 8 years and has just lost his last appeal. The execution day arrives, and after the priest has read to him, the hangman escorts him from the cell. They get out of the cell block into the courtyard and the prisoner is down hearted to see it is absolutely pouring down rain."I don't believe this." Says the prisoner "Of all the days to be hung and its pouring hard with rain."The hangman replies "Well its all right for you, I've got to walk back in it!"

Q: What do you call a lawyer who has gone bad?

During a dinner party, the hosts two little children entered the dining room totally nude and walked slowly around the table. The parents were so embarrassed that they pretended nothing was happening and kept the conversation going. The guests cooperated and also continued as if nothing extraordinary was happening. After going all the way around the room, the children left, and there was a moment of silence at the table, during which one child was heard to say.... "You see, it IS vanishing cream!" 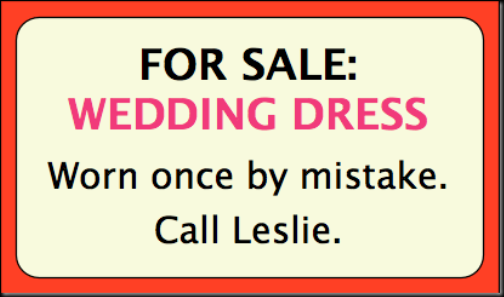