It was 8:55 a.m. and we had the big wheels rolling.  Not knowing if it was a good idea to leave our quiet little spot in the Cibola Wildlife Refuge we headed out anyway, crossed the Colorado River again and set ourselves a westerly course further into California.  Yes, things are more expensive in California but it's a beautiful State and we have a lot of great memories here.  Of course we were heading to one of our all time very much most favorite places......Borrego Springs. 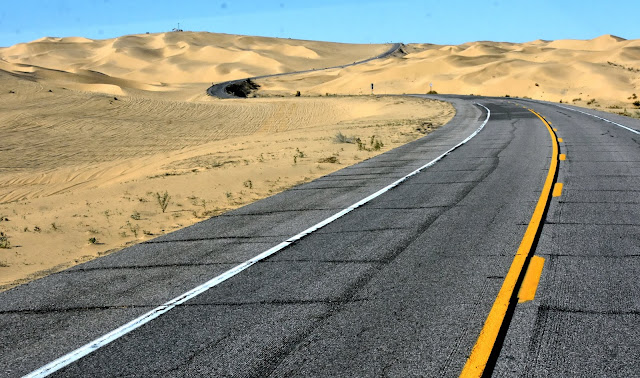 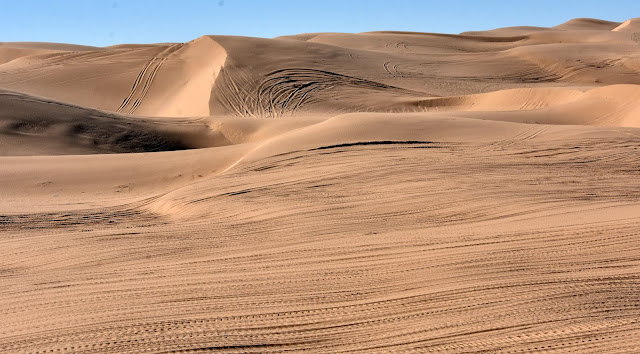 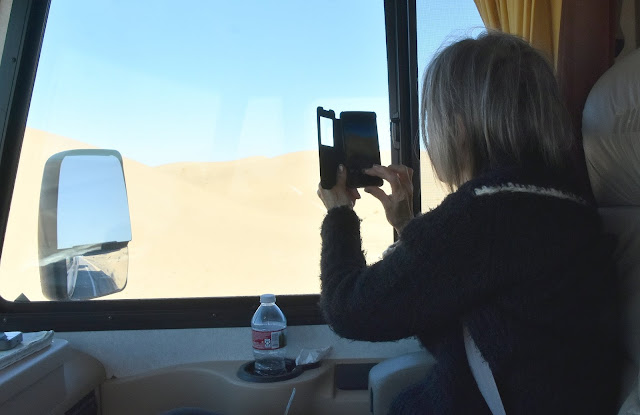 It's about a two hour drive from where we were to Borrego and it was a clear blue sky all the way.  A familiar route for us and one we have driven a number of times both ways over the years. 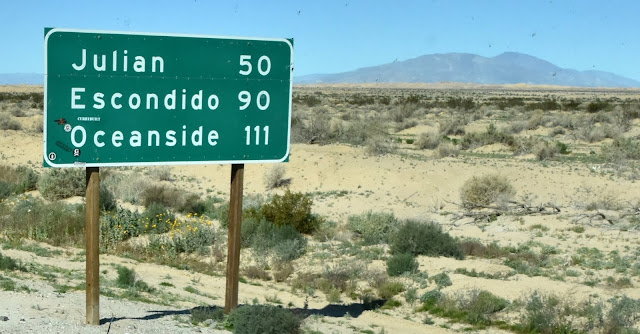 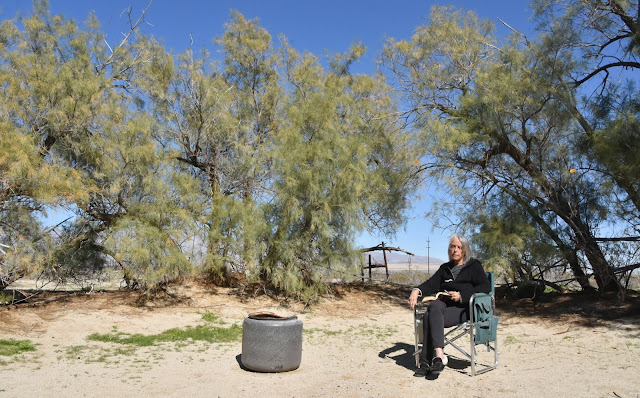 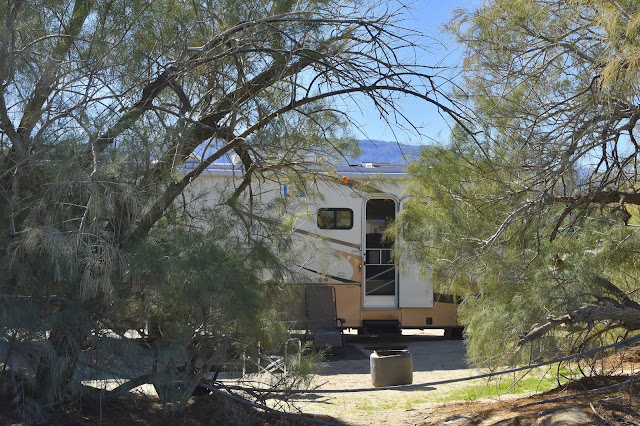 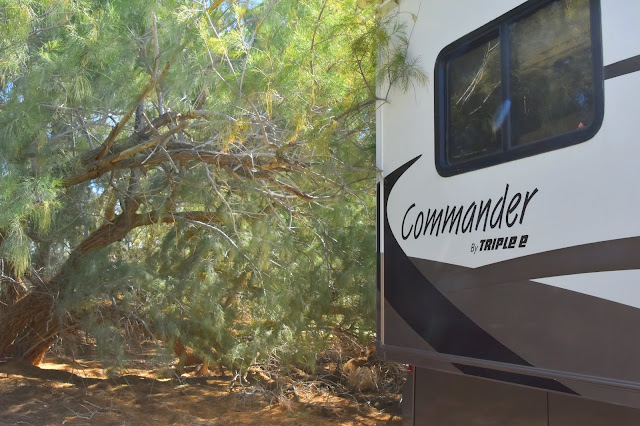 Because it's President's Week in the United States and knowing kids were off school we unexcitedly expected to see a lot of ATV's, dirt bikes, and dune buggies in the Ocotillo Wells area and couldn't believe our luck when we found the whole area completely dead and devoid of any off-road vehicles.  It was a good omen for Borrego Springs and sure enough we found Borrego Springs quiet as well.  Our luck held and we found one of our favorite spots empty.  Although we had contemplated skipping Borrego Springs this year I am sure glad now we didn't.  Great to be here...............

Of course long time blog readers will know where we headed straightaway for supper.  Jilbertos has been a favorite of mine since first coming here back in2007.  It's a Mexican restaurant but I don't care for Mexican food but they have a great burger and fries which I get every time we go there.  And it's one of the only times a year I drink a soda.  Rootbeer:))  I had my usual today and Kelly had some fish taco things with something else all rolled up in green stuff or something. 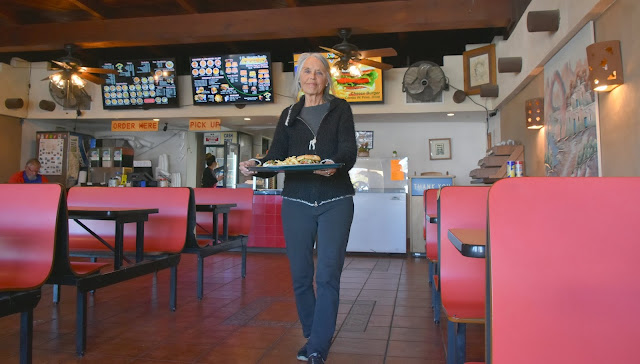 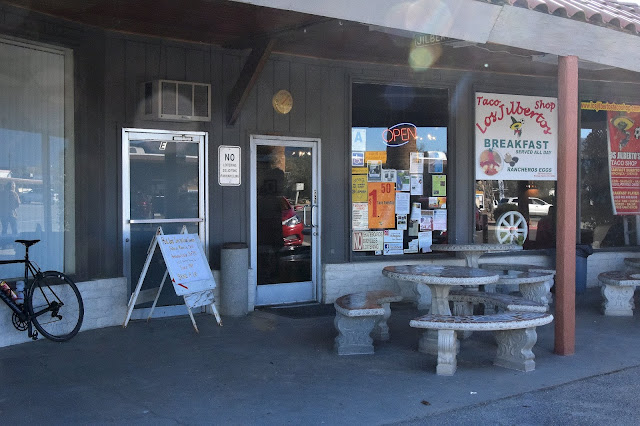 After Jilbertos Kelly walked across the street to the Anza Borrego Desert Nature store to pick up a program of upcoming events.  Soon as she walked in the door she was recognized by a long time Borrego Springs blog reader.  A lady working there said she knew it was Kelly right away:))
No idea how long we'll be here so we'll just play it by ear.  Maybe a few days, maybe a few weeks.  Wednesday will be a catch-up day.  Laundry, groceries, Thrift store, rig clean-up, etc.  Winds are predicted followed by rain Thursday but for only one day then Sun, Sun, Sun:))
GROANER'S CORNER:(( The construction foreman ordered one of his men to dig a hole 8 feet deep. But after the job was done, the boss returned and explained an error had been made and the hole wouldn't be needed. "Fill 'er up," he ordered the worker. The worker did as he'd been told. But he ran into a problem. He couldn't get all the dirt packed back into the hole without leaving a mound on top. He went to the office and explained his problem. "Honestly!" the foreman snorted. "The kind of help I get these days! There's obviously only one thing to do. You'll have to dig that hole deeper!"
----------------------------

Politicians and diapers have one thing in common: they should both be changed regularly… and for the same reason.

A father was at the beach with his children when the four-year-old son ran up to him, grabbed his hand, and led him to the shore, where a seagull lay dead in the sand.
"Daddy, what happened to him?" the son asked.
"He died and went to Heaven," the dad replied.
The boy thought a moment and then said, "Did God throw him back down?"