VISITING WITH BILL, JEEP RIDE WITH PHEEBS, AND MILITARY VEHICLES IN BOUSE

Standing outside the rig in a light drizzle early Saturday night I was fascinated by fast moving light beams flashing and darting at times high into the sky.  It was the Parker 425 Best In The Desert 'off-road' trucks still churning through the desert several miles away.  With there being a slight mist in the night air their powerful lights would shoot into the sky as they came up and over steep rises through the desert's gulley washes.  Their lights were very powerful and I wondered if maybe some of them might have been using aircraft landing lights.  I was seeing six and seven sets of lights at a time jostling over the landscape and also their tail and brake lights as they made turns heading away.  The drizzle soon turned into a steady rain and I thought of the mud those fellas would find themselves in.  At one point the many bouncing lights in the solemn wet night sky slightly reminded me of a speeded up mini version of the Northern Lights.  Perhaps if their powerful lights had been green it might have convinced me. 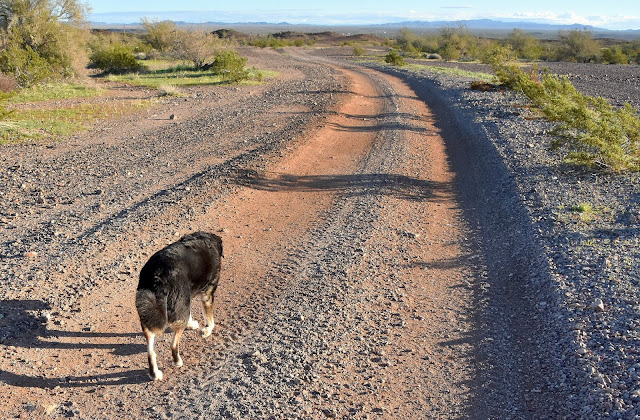 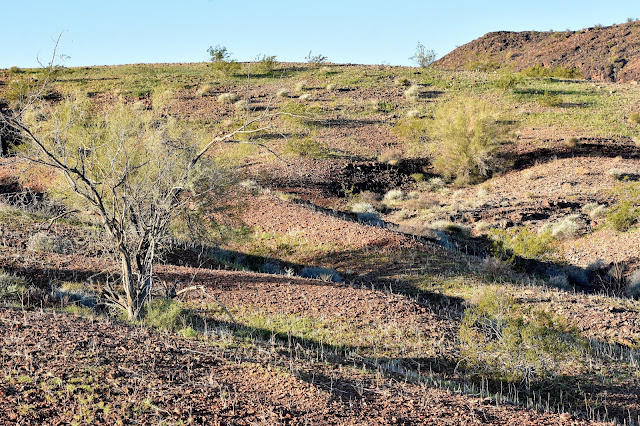 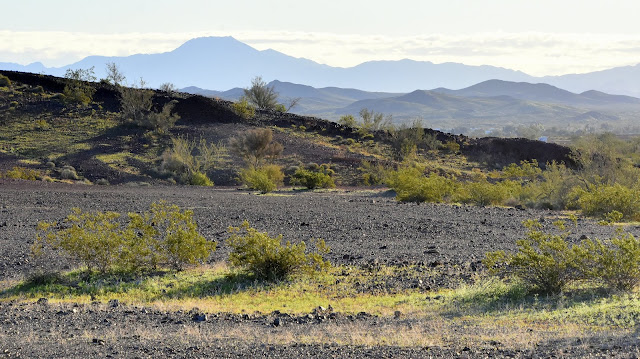 Well here we are in the shortened month of February already and we've only been gone from home slightly over a month so far.  It's another nice area we are in but we've had problems here before with our Verizon connection and this time our T-mobile phone reception is not good.  Kelly likes to call her Mother and I most always call my Aunt Jean on Friday nights but we've had to forego those calls since arriving here.  We might very well strike out for newer pastures sometime early next week and we may follow the Colorado River south into California.  Then again, we just might go the other way. All depends on which way the wind blows us I guess...……Oh, and where the telephone and internet connections are better. 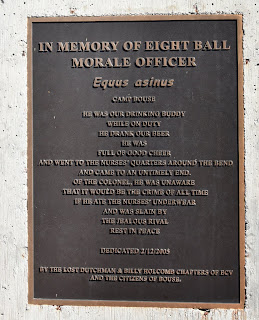 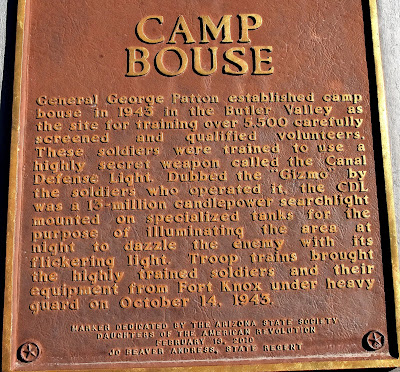 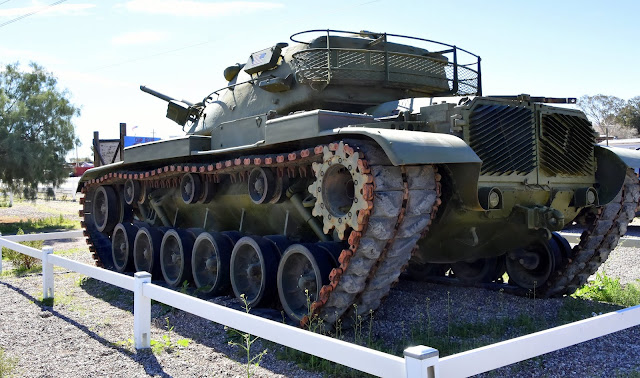 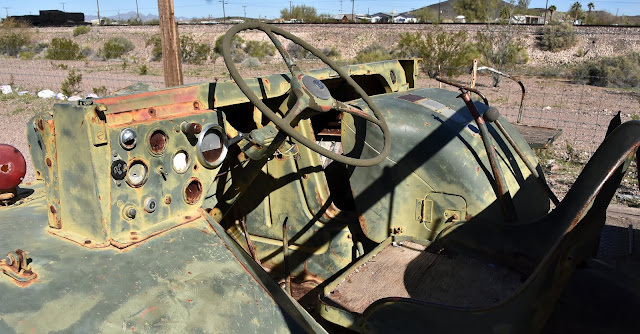 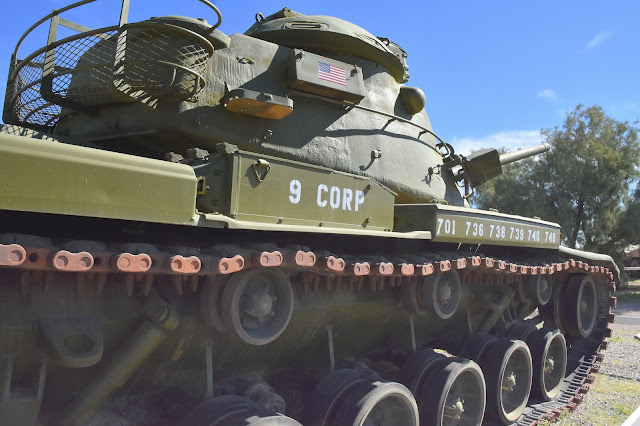 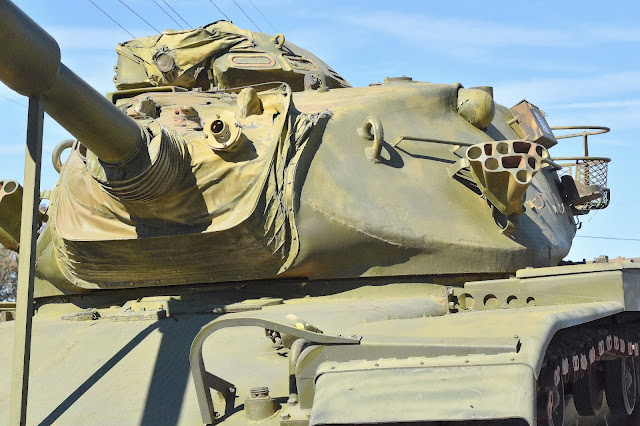 It wasn't a big or heavy rain we had Saturday night and by morning skies were mainly clear.  Didn't feel like the expected temperature drop had happened either.  Yet another fine day here in the great American Southwest.  Just can't imagine spending winter's anywhere else.

A nice email from a couple (Linda and Gerry) in Buckeye Arizona a couple days  With that email we now know we have four readers in Buckeye and not just two.  Yay Buckeye:))  Also, a few readers have mentioned that they are no longer receiving email notices of our blog posts.   We haven't made any major changes to our settings so am not sure what that is all about.

While Kelly was doing some coach vacuuming about mid morning I slipped on down to see how Bill was doing and as it turns out he's doing fine.  Had ourselves a nice sit down outside morning chat and even managed to walk over to a nearby neighbor Bill was concerned about.  The fella had left with his dog 3 or 4 days ago and not returned despite leaving his trailer door open.  We checked around his neighbor's trailer to make sure nothing was amiss.  And it wasn't. (the neighbor returned a few hours later)  Bill showed me through his new 25' travel trailer and being a handy fella he's already made lots of clever renovations  Nice trailer.  Talking to Bill he put me onto a fellow Blogger's site called Love Your RV.  I checked it out and it looks like a very helpful site with lots of great RV info.  Be sure to check this full-timing couple's educational travels.  I think there is probably something interestingly informative here for most RV'ers.


Back up to our rig about an hour later I decided to take Pheebs out for a Jeep ride so with a very happily excited little dog off we went.  We rumbled west along a Jeep road heading back into a block of small mountains.  Roads were reasonably good and I never had to use 4 wheel drive anywhere which was Okay considering I have a bit of noise in one of my wheels while in 4 wheel mode.  Wasn't long and I spotted a mine shaft so we stopped.  This area is laced with countless mines and pits with a lot of mining claim stakes visible.  I ventured into the mine shaft for a short distance using the flash on my camera for a light.  Noticed a slight chemical smell and it was noticeably warmer in the shaft by a few degrees.  From the mine we continued following the road which finally led us out to Plomosa Road west of Bouse.  Much of this area is familiar to us from being here several times over the years so we headed on into Bouse, took a few photos, then headed on back to the rig.  A nice little Jeep ride for Pheebs and I. 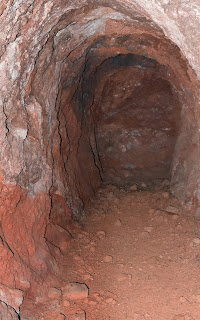 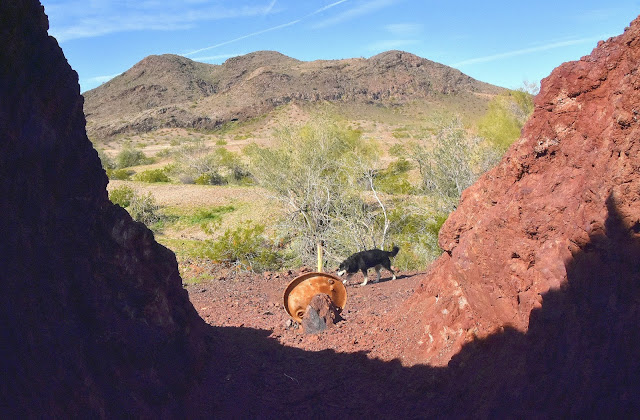 Turned out to be another beautiful day with clear skies, 70ish temps, and an abundance of sunshine. For us 70 is about as close to perfect as one can get.

GROANER'S CORNER:((  In light of the rising frequency of grizzly bear attacks on humans the Alaska Department of Fish and Game is advising hikers, hunters, and fishermen to take extra precautions and keep alert of bears while in the field. They advise that outdoorsmen wear noisy little bells on their clothing so as not to startle bears that aren't expecting them. They also advise outdoorsmen to carry pepper spray with them in case of an encounter with a bear. It is also a good idea to watch out for fresh signs of bear activity. Outdoorsmen should recognize the difference between black bear and grizzly bear dung. Black bear dung is smaller and contains lots of berries and squirrel fur. Grizzly bear dung has little bells in it and smells like pepper.
-----------------------
- What did Noah do while spending time on the ark?Fished, but he didn't catch much. He only had two worms!
- Mother: What was the first thing you learned in class?  Daughter: How to talk without moving my lips!
- What's big and yellow and comes in the morning to brighten a mothers day?  Pupil: The school bus!----------------------
An old man was relaxing at his hundredth birthday party when a reporter went up to him. "Sir, what is the secret of your long life?"The man considered this for a moment, then replied, "Every evening at 9 p.m. I have a glass of port. Good for the heart I've heard."The reporter then asked, "That's ALL?"The man smiled, "Well, canceling my voyage on the Titanic sure didn't hurt."
=================
Posted by Al Bossence at 2/03/2019