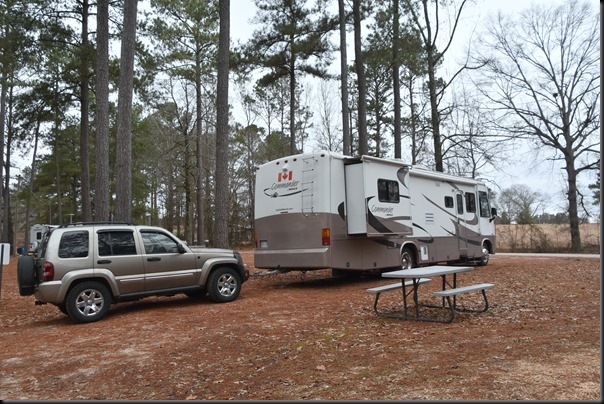 There’s an old saying, ‘Red sky in morning sailor take warning.  Red sky at night sailor’s delight’.  We sure had a fiery red sunset Monday night so I was hoping to be delighted by ‘big blue morning skies.  Didn’t happen. 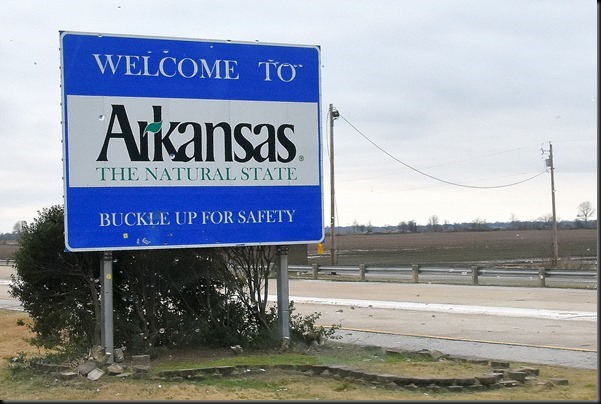 Under cloudy skies we rolled out of Sikeston Missouri’s Walmart at 7:40 a.m. making our way a short distance east to I-55 heading south.  Two and a half hours later on bare and dry lightly trafficked roads we bounced off the northwestern side of Memphis Tennessee ricocheting west off I-55 onto I-40.  First Rest Area we came to near Forrest City we pulled in, shut it down and had ourselves a break with ham sandwiches and hot coffee.  Nice long break again which is different from other years when we took on the fly ‘jackrabbit’ breaks. 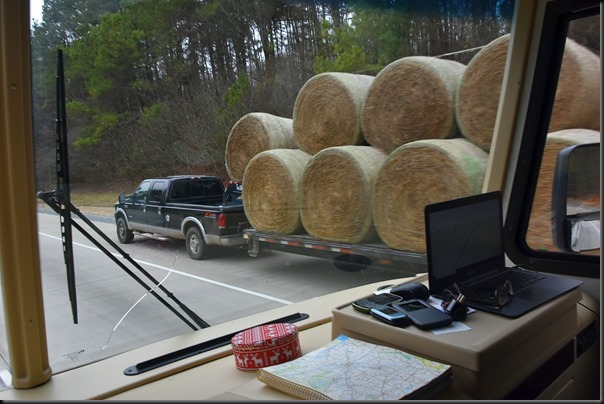 A nice driving day with light traffic south on I-55 but traffic noticeably picked up when we headed west on I-40.  Lots and lots of trucks.  Because of it being New Years Day it was our easiest run around Little Rock Arkansas’s southern by-pass route.  We’ve done this same route maybe half a dozen times over the years and some times we did it in the pre-dawn darkness trying to beat the city’s morning rush. 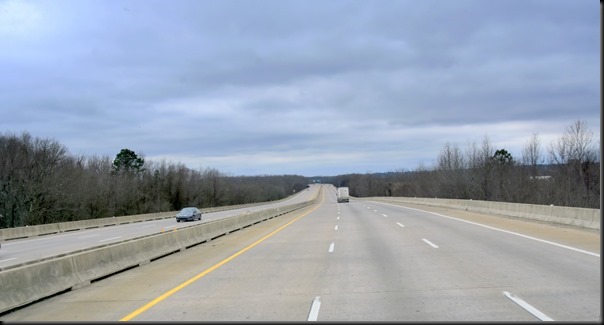 HEADING WEST NEW YEARS DAY 2019 AND IT SEEMS WE JUST CANNOT ESCAPE THESE CLOUDY DAYS…..NOVEMBER AND DECEMBER HAVE FOLLOWED US RIGHT INTO JANUARY:(((

Because of it being New Year’s Eve a younger segment of the Sikeston locals were still flopping around like a bunch of trained Seals in the Walmart parking at 3 a.m. so needless to say it wasn’t a good night’s sleep for either Kelly or I.  With that in mind we decided to look us up a hopefully quiet RV Park tonight.  Climbed aboard the internet and found J.B.'S RV Park and Campground south of Little Rock Arkansas right alongside I-30.  Rolled in about 2 p.m.  Well, it’s quite a place alright and I certainly wouldn’t recommend it for any of you high end RV folks out there.  No nice level cement pads with smoothly paved roads and four inch curbs, No hot tubs or shuffle courts.  Things are pretty quaint and rustic which of course we here at the Bayfield Bunch don’t mind so much.  It’s an Okay overnight spot for us and we have full hook-ups.  If you don’t mind tracking a little dirt into your coach and getting your tires dirty it might be aright for you too.  I did really like the showers though.  Lots of water pressure and lots of hot water in a nice warm washroom/laundry building.  Showers are free so no having to stick a hundred quarters in a stupid machine to get three and a half minutes worth of hot water.  We couldn’t shower in the rig because we are having a few water issues at the moment. 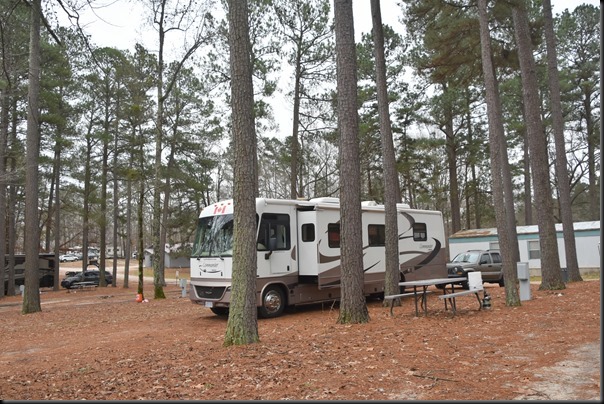 Well, just as Christmas kinda blew right on by me like a speeding freight train this year New Years did about the same.  Couldn’t seem to get myself into the Christmas spirit and I totally forgot about it being New Years Eve until I heard a few guns go off earlier Monday evening near Walmart in Sikeston.  I haven’t put much thought into any New Years thoughts except to say looking back over the past 12 months I have to give the year to my blog readers and say thanks again to everyone for your continuing interest , kind words, and support.  My goal for 2019 will simply be to keep my blog going for another year.  Thanks to all you folks for helping me through another 365 days:)) 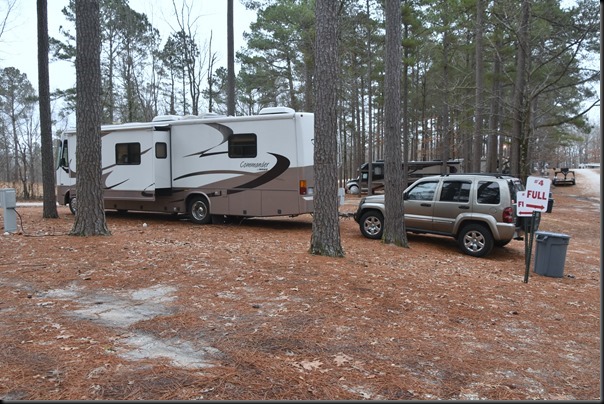 I want to gain weight. Put on at least 30 pounds.

I will start buying lottery tickets at a luckier store

Gain enough weight to get on The Biggest Loser.

I will do less laundry and use more deodorant.

I will no longer waste my time relieving the past, instead I will spend it worrying about the future.

I should eat out more.

“A military alcoholic drink is a mug of war.”

- Worry is interest paid on trouble before it is due.