GREENVILLE TEXAS TO ABILENE TEXAS: AND WE DARN WELL DID DETERMINEDLY DO DALLAS TODAY:)) 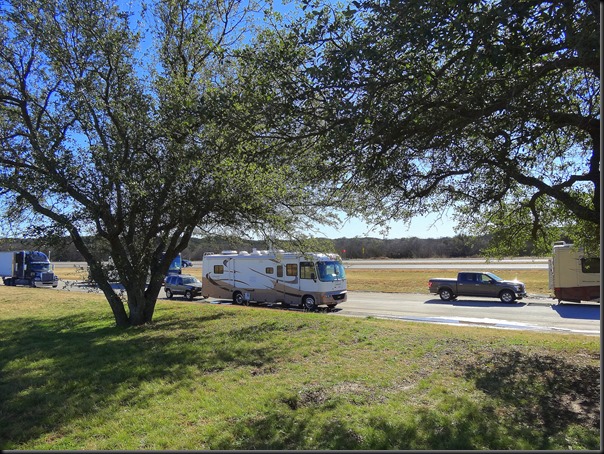 This is Friday January 4th’s post.  We have a very slow Verizon connection and I’m not sure when this will publish, Friday or Saturday.

To say we were very discouraged Thursday night after finding out our water pump quit working would be putting it mildly.  That, coupled with a ‘few other things’ still had us down this morning as we sat in the rig discussing what to do.   We even talked about cutting our losses and heading home.  Of course this wasn’t the first time we had been in this situation over our RVing years and I’m sure there are a lot of other Snow Birds out there who understand and have been in the same boat at one time or another.  It’s very easy for one’s thoughts to think of ‘home’ when one becomes overly discouraged about things……………. 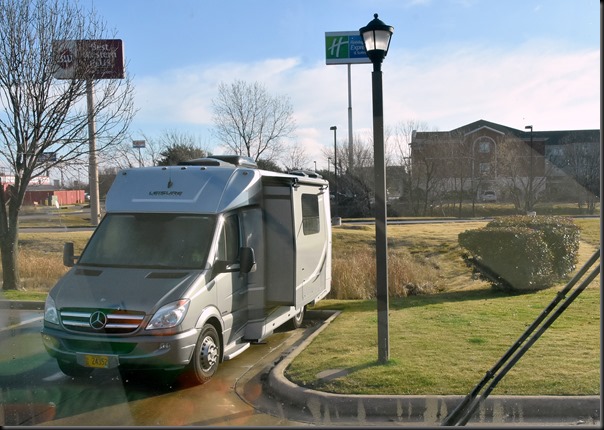 OUR ONLY OVERNIGHT NEIGHBOR AT CRACKER BARREL….BOTH KELLY AND I LIKE THESE SMALLER SUPER CLASS B’S

Hoping to see a sky full of stars when I stepped out with Pheebs around 6 this morning I was further discouraged by a wind driven cold drizzle under a gloomy starless sky.  But I saw something a couple hours later that began to turn my day around.  Something bright on the back of one of our chairs in front of a window.  Sunlight:)))))  What the heck?? 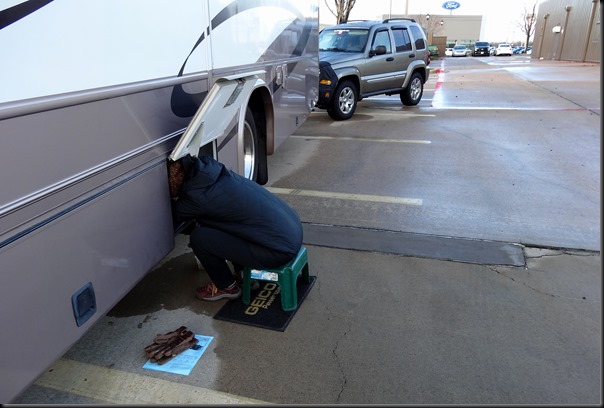 Before pulling out this morning we opened the bin where our water pump resides and both tried repeatedly to get our hands and arms into a small space to check the in-line fuse but we could not get a good grip on the rubber fuse holder.  And that was that. 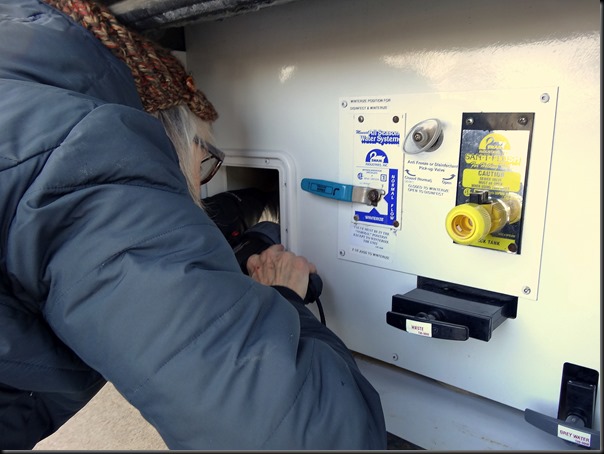 A VERY POORLY DESIGNED SMALL OPENING TO GET ONE’S HANDS AND ARMS IN…..WHY DID THEY HAVE TO MAKE THIS OPENING SO SMALL!!!! 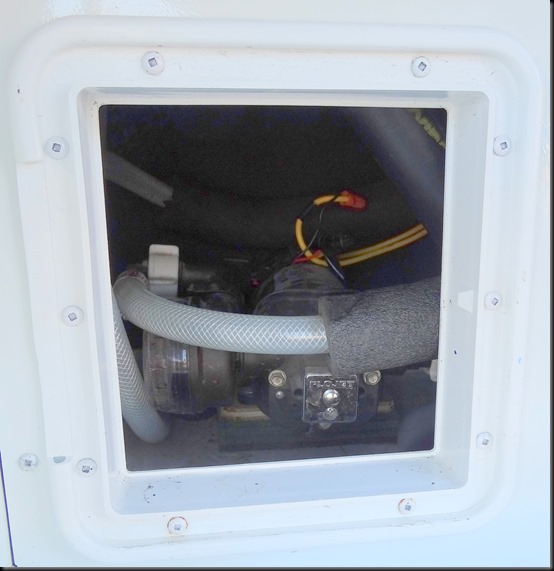 Under clearing sunny skies we rolled out of the Cracker Barrel parking lot at 9 a.m. and picked up I-30 west heading for Dallas.  Traffic wasn’t too bad but thickened up the further we went.  Luckily this time we did not miss the 635 southern by-pass leading to I-20.  Traffic was lighter than expected and we were able to navigate all the way around the southern edge of Dallas/Fort Worth and I’ll bet it took us the best part of an hour before we were able to clear the two cities.  And we are not slow pokes.  Kept thinking to myself, ‘when is all this city traffic going to end!!’ 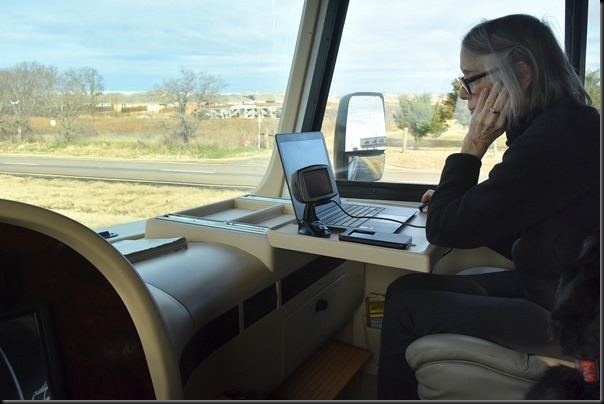 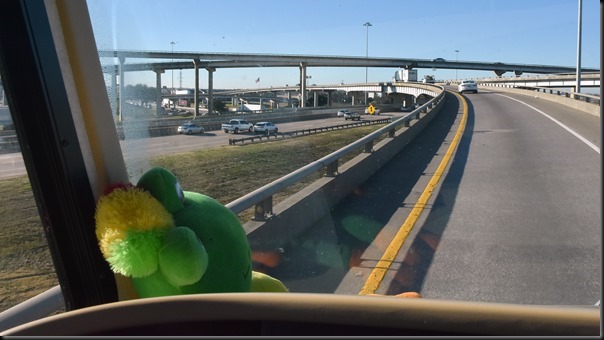 TRAFFIC AROUND DALLAS WASN’T TOO BAD, WE’VE BEEN IN A LOT WORSE 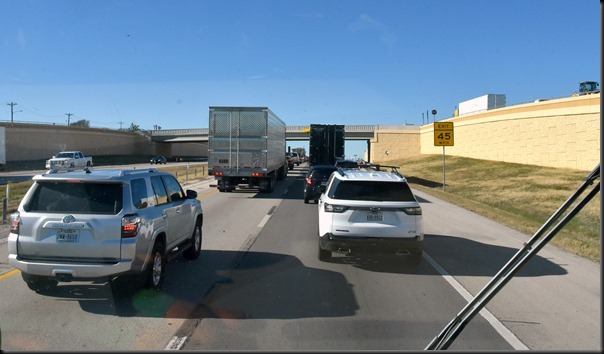 As soon as we headed west  out of Dallas on I-20 I was able to swivel my head around and have a look at the countryside and ‘YA-HOUIE LOUIE’ I saw right away we had finally reached the eastern edge of the great American Southwest.  Mesquite trees, prickly pear cactus along the fence lines, gently rolling hills, and sweeping vistas that stretched for miles.  We won’t reach the mountains until Sunday but how nice to be into warmer weather and a great big blue cloudless sky full of sunshine.  Warm enough to put my driver’s window down and crank up the dash’s air vents. 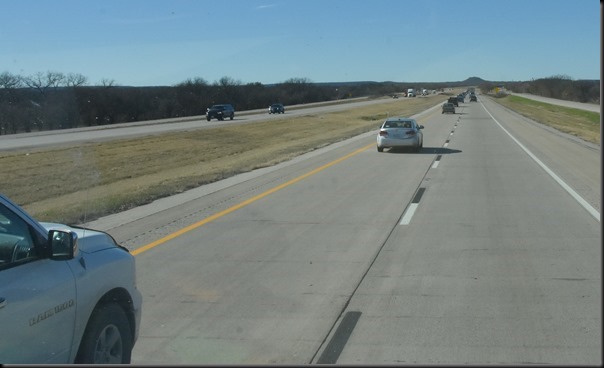 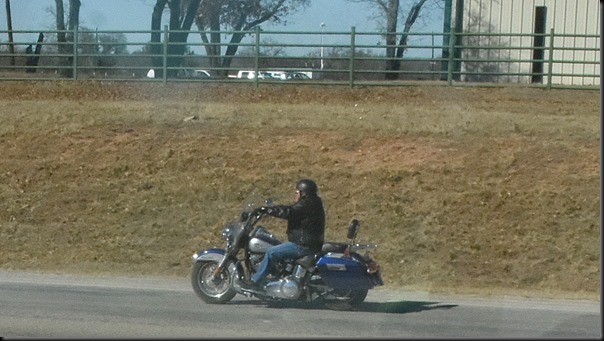 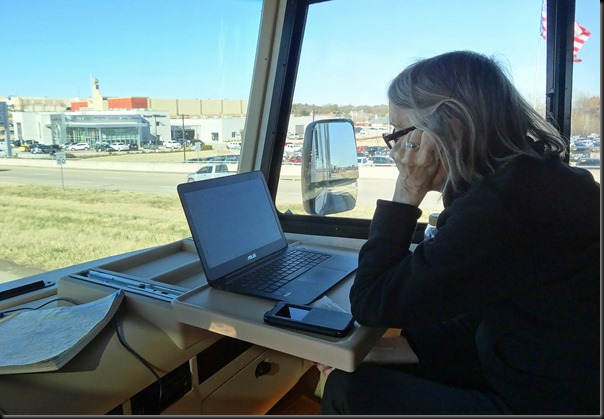 OUR VIGILANT NAVIGATOR IS STILL ON THE JOB

Stopping at a Rest Area somewhere between Weatherford and Abilene we again had another go at checking that in-line water pump fuse but no go.  And how nice at that Rest Area to walk around on some grass feeling the warmth of the sun on our faces.  In George's own words, ‘wonderful, wonderful, wonderful:))’ 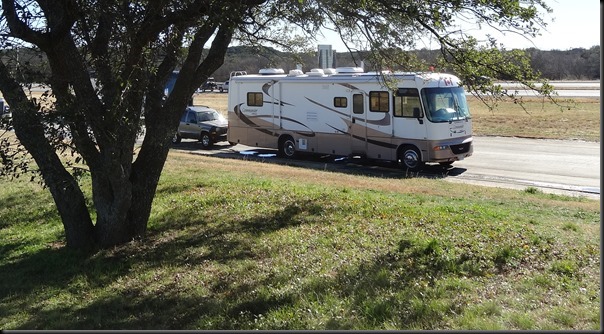 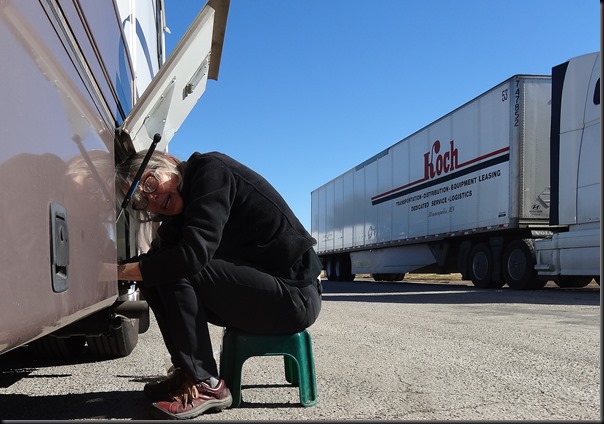 Decided to call it a day when we reached Abilene Texas so rolled off the Interstate into a Walmart/Cracker Barrel complex.  Having pretty much overdosed ourselves on Cracker Barrels we found us a nice level spot in a corner of the Walmart parking lot.  How nice to shut it down and call it a day.  Although we slipped through Dallas without any problems the stress factor still takes it’s toll.  And how nice not doing those long grinding driving days we used to do.  I think maybe ‘we get too soon old and too late smart’. 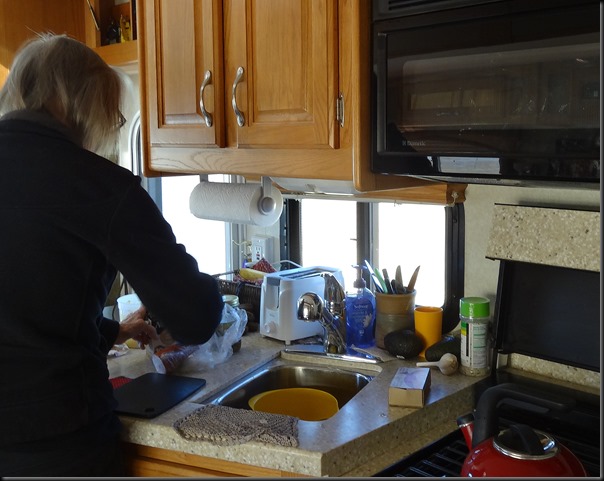 With the weather being so nice in Abilene Kelly suggested we could just stay right for the rest of the winter.  Ya right!!  With that thought in mind she headed off into Walmart looking for some kind of grill thing and I busied myself spraying all the Motorhome bin latches with WD-40.  Road salt can really get into those latches and seize them up and our latches were already getting stiff from this past week’s salty roads. 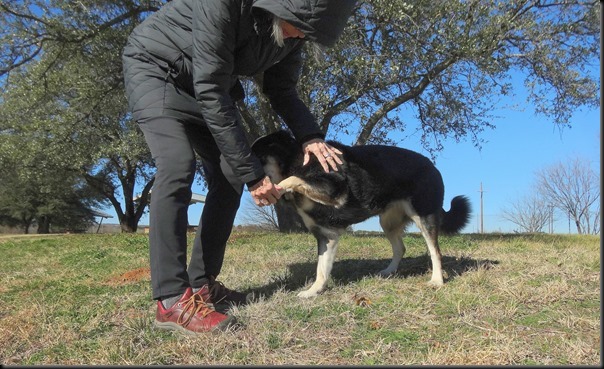 Kelly got on the phone and called ahead to Camping World in El Paso Texas to see about getting the rig in for them to check out our water pump.  Nice fellow on the phone said they were booked soild until January 17th but recommended another place right across the Interstate from them.  Kelly right away phoned Fun Country RV and Marine and we have an appointment for Monday morning.  This place has good reviews so we have our fingers crossed. 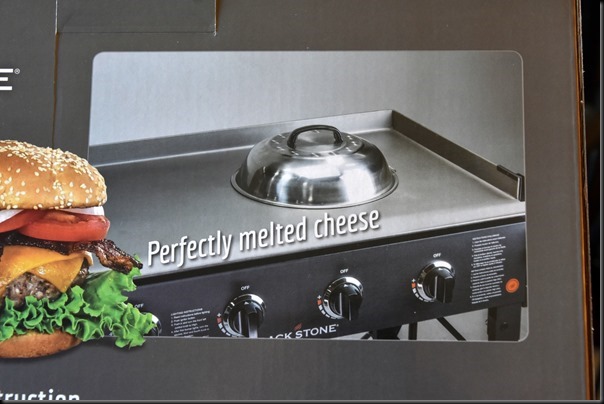 OKAY SO AT WALMART KELLY BUYS A LID FOR PUTTING OVER FOOD ON A GRIDDLE….TAKE NOTE OF THE LID IN THIS PICTURE ON THE BOX 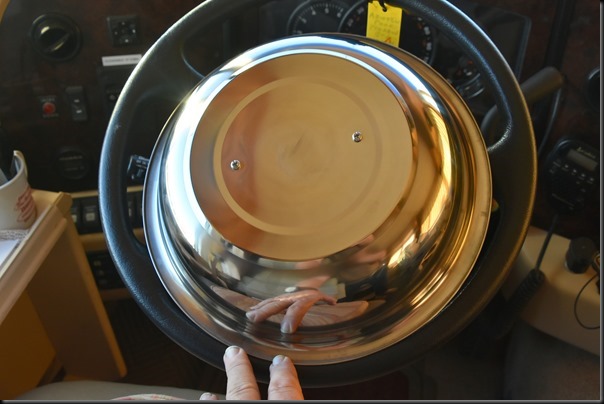 SHE TAKES THE LID OUT OF THE BOX…..BUT WHERE’S THE HANDLE??  DID THEY FORGET TO INCLUDE IT?? 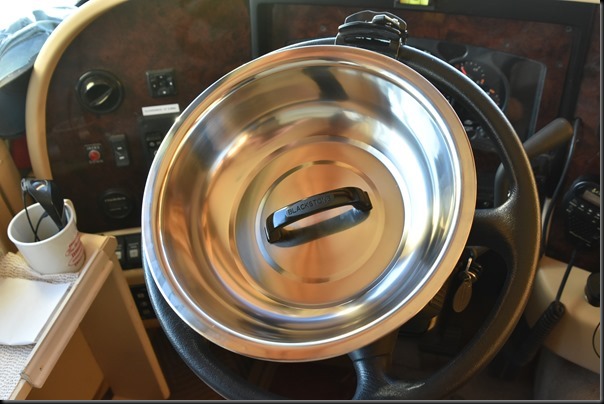 NOPE THEY DIDN’T FORGET TO INCLUDE IT BUT WHAT THE HECK…..IT’S ON THE WRONG SIDE OF THE LID!! 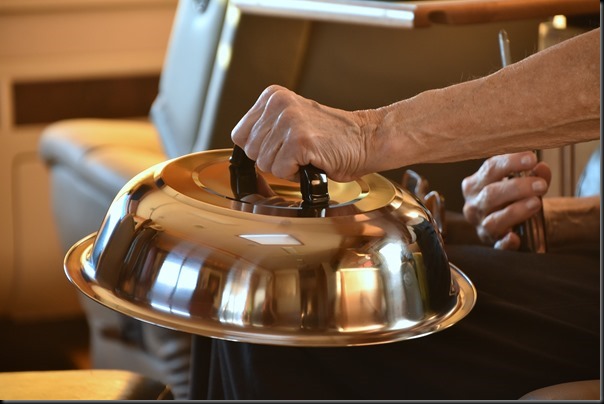 SO DID SHE TAKE THE LID BACK AND MAKE A BIG FUSS??  NOPE, SHE GOT OUT HER TRUSTY SCREWDRIVER, UNSCREWED THE LID AND PUT IT CORRECTLY BACK ON THE OTHER SIDE

In Greenville Thursday night I heard a light knock on our side door.  Kelly had already gone to bed and I was minutes away from crashing myself.  Turns out it was one of our long time blog followers and Facebook commenters.  Serena Runyon Farmer had just read my Thursday night post and realized her and her husband lived only 20 minutes away from our location.  Nice to meet these folks but unfortunately due to the hour we couldn’t really have much of a visit.  Kelly did get up in her jammies to say hello though.  Of course I had already taken my dentures out and was well aware I was standing there in the doorway flapping my gums like a grizzled Gabby Hayes on a midnight moonshine run.  Maybe if we travel home through Greenville in a few months we can stop in and say hello.  I did feel bad after they left that we didn’t invite them in though.  Both Kelly and I were still in a moody state of frazzlement over our water pump and stuff:(( 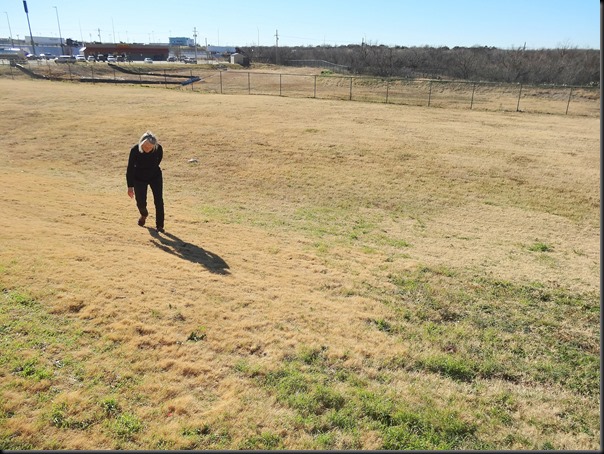 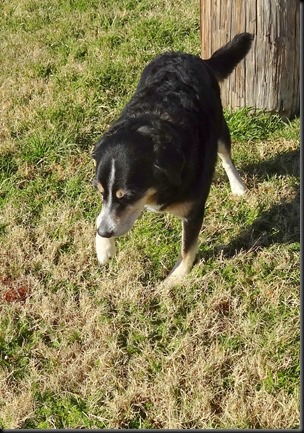 And a correction to my recent Sunday post where I incorrectly said we had a poor experience at a Lansing Cracker Barrel.  It was in Auburn Indiana where we had that unsatisfactory meal, not Lansing.  Thanks to our good friend and fellow Canadian RV’er Gord for noticing my error.  I have since made the correction to my Sunday post.  Thanks Gord:))

YESIREEEE, THAT IS DEFINITELY SOME REAL LIVE SUNSHINE ON OUR COACH EARLIER THIS EVENING

Recently scientists revealed that beer contains small traces of female hormones. To prove their theory, the scientists fed 100 men twelve bottles of beer each. The scientists observed that 100% of the male test group gained weight, talked excessively without making sense, became emotional, and couldn't drive.  No further testing is planned.

“Reverend Spooner, who spent his college days in poverty, was a flat broke frat bloke.”