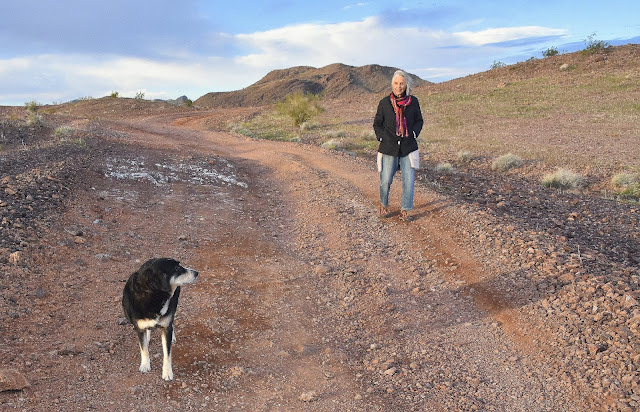 Turned out to be a busy morning for us and yes it is Bouse Arizona we are boon-docked near.  Not sure where we are but we have nice unobstructed views and there is nobody close to us.  To our Northeast is the Buckskin and Harcuvar Mountain Ranges,  East is the Harquahala Range while South and Southwest run the Plomosa Mountains.  Well at least that is kind of what it looks like to me when I check my Arizona Benchmark Atlas.

Cooler this morning and with a brisk breeze we didn't walk quite as far as we usually do but at least we are able to get out and walk every morning.  Sure wouldn't be able to do that if we were back home stuck in the house by snow and freezing temperatures. 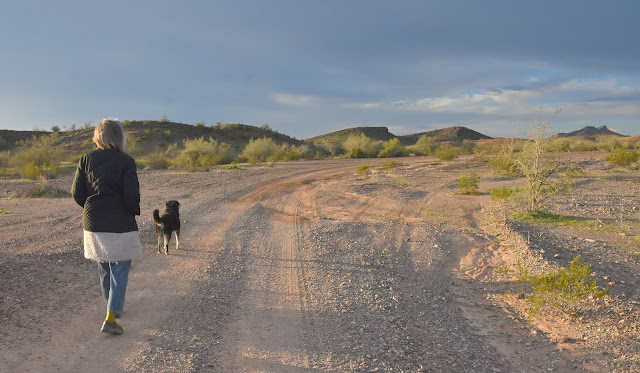 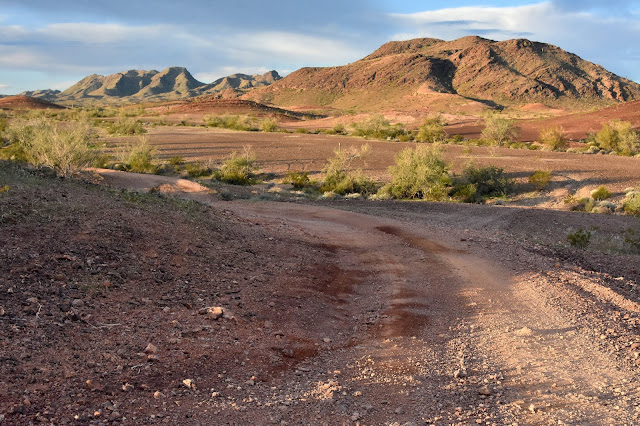 The bustling desert town of Parker Arizona is 26 miles Northwest of us and with a couple bags of laundry and a grocery list we piled into the Jeep and headed on over that way earlier this morning.  Fair bit of traffic and we were there in about half an hour.
First stop was the laundromat and with laundry swirling in the machines we slipped out and picked up some gas at a Shell station then dropped into the Castro Service Center where our Motorhome has an appointment at 9 a.m. Friday morning. (power steering problem) Also a stop for a quart of power steering fluid at Parker's Napa Auto Parts just in case we need it along the way.  Laundry done it was straightaway off to Burger King for 2 Whoppers. (2 for $6) We like McDonalds coffee so from Burger King it was up the street for two coffees.  Whoppered ourselves in McDonalds Parking lot.  Big paved parking area behind McDonalds for RV's and trucks.  Lots of room for those big 40 foot diesel bangers.  Across from McDonalds is Walmart so with coffee's securely in our tummies we motored ourselves on over there.  What a ZOO that Walmart was.  Never saw so many Seniors shuffling around in one confined spot before. Well except for 'Seniors Day' in a Sierra Vista 'Frys Supermarket one time.  That was bizarre.  I nearly got trampled to smithereens.  Yes I know, I am a Senior too.  It was a real challenge and test of tolerance for me today to thread my way through the crowded Walmart grocery aisles.  I may be heavy but I'm still agile and fast on my feet and my always quick reflexes saved me again and again. Those women with their battering ram shopping carts sure can do damage to a fella.  With that thought finally foremost in my mind I left the grocery cart with Kelly and hurriedly exited the store. Took Pheebs for a walk in a large spacious sandy lot next door.  Serenity:)) After Walmart our next stop was Spanky's RV & Marine just up the road.  Needed a new plastic slider for our rig's screen door and by golly we found one.  From Spanky's we still had 3 more stops ahead of us, all Thrift Stores.  Traffic in Parker today reminded me of downtown Florida and I breathed a big sigh of relief when we FINALLY got ourselves the heck out of town.  Back to Bouse we had one more stop at the Bouse Farmer's Market eventually finding our way back to the rig sometime around 2 p.m.  Oh, and earlier this morning before leaving Bouse we checked out the Le Mesa Verde RV Park to see where the dump station was located as well as water and propane locations. 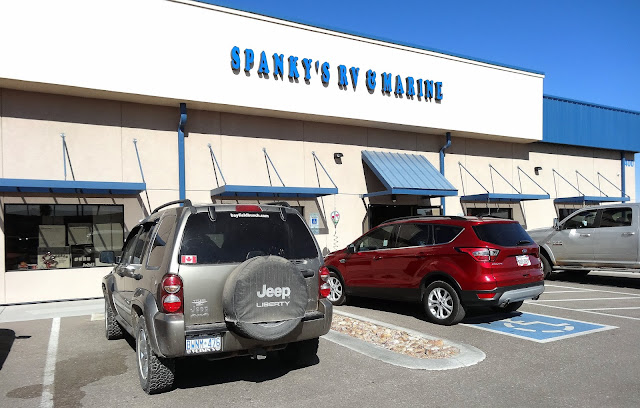 There was a time when running around like we did earlier today was perfectly normal and routine,  Nothing to it and we all did it (and much more) most every day without hardly breaking a sweat.  By the time we got back to the rig today you would have thought we had ran a marathon or something. This aging stuff sure is discouraging sometimes.  Okay, Okay, most times!!

GROANER'S CORNER:(( An airplane encountered some turbulence, it started juddering and rocking noticeably from side to side. The flight crew wheeled out the drinks cart to keep the passengers calm. The attendant asked a business man, "Would you like a drink?" "Why not?" he replied unkindly, "I'll have whatever the pilot's been having."