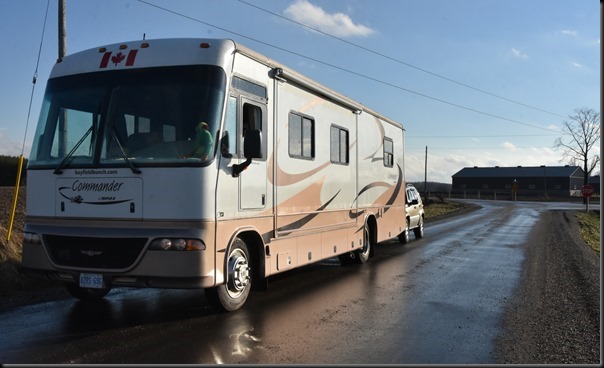 We sure caught us a nice break with today’s temperatures reaching the 50F mark.  So much nicer loading up the last few things into the rig.  No freezing cold temps, no big gusting winds, no rain, no snow falling or snow on the ground to trudge through tracking it into the Motorhome.  Would you believe I saw Kelly walking out to the rig with some stuff and she was in ‘short sleeves’.  Yep it’s true.  It was a very short Jeep ride into Bayfield and back for Pheebs and I this morning.  Didn’t even bother with a coffee.  I later returned to Bayfield’s carwash with Kelly’s white Sunfire to hose all the road salt off from her trip to Cambridge a few days ago. 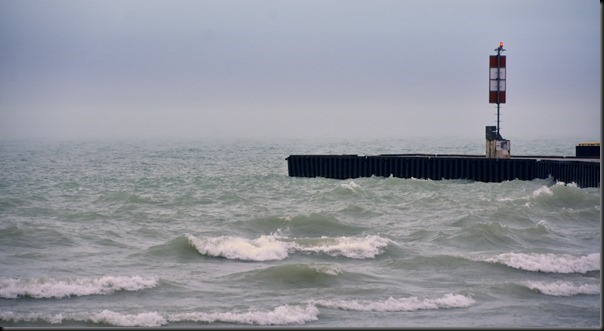 Even knowing we were in for 50F temps today I was still totally surprised to look out the window this morning and see all the snow gone.  Nothing, it was just gone.  Unfortunately it left very muddy conditions behind and both the rig and Jeep are now a complete mess.  Especially the Jeep.  I hooked the Jeep onto the Motorhome later this afternoon then headed out for a short spin to make sure I had done everything correctly.  Last time I hooked up the Jeep was in Sarasota Florida over 10 months ago.  Although sunny, roads were still wet and by the time I returned home 10 minutes later the Jeep was one big helluva mess.  My guess is that with falling temps tonight salt trucks will be out in full force because those still wet roads will freeze to ice.  I imagine we will end up being totally encrusted with corrosive road salt before we even get to the other side of Bayfield.  It’s absolute lunacy to head south at this time of year in an RV but we made the choice and that is that. 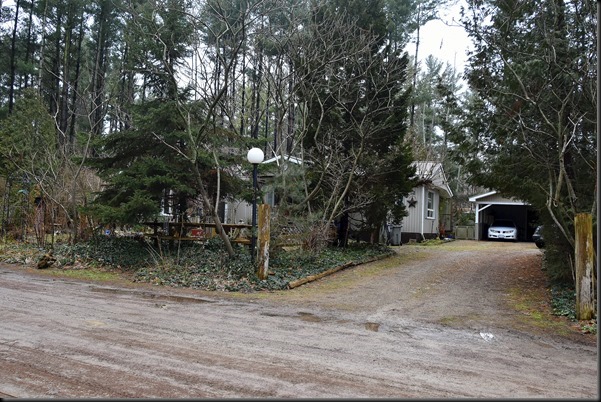 HARD TO BELIEVE ALL OUR SNOW WAS GONE BUT OH THE MUD!! 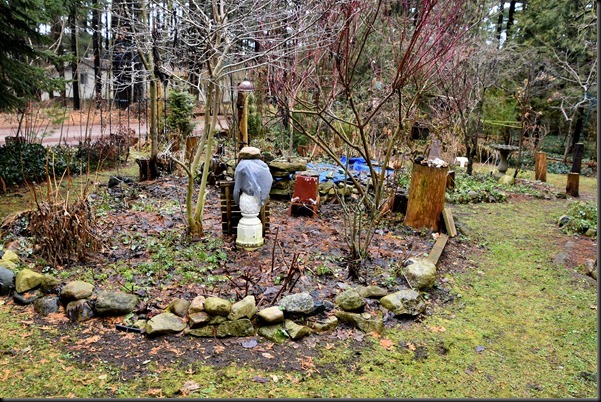 Would have been a good day to get out of Dodge before the flash freeze tonight but Kelly had a lot of last minute cooking things to do so we stuck to our Saturday morning departure. 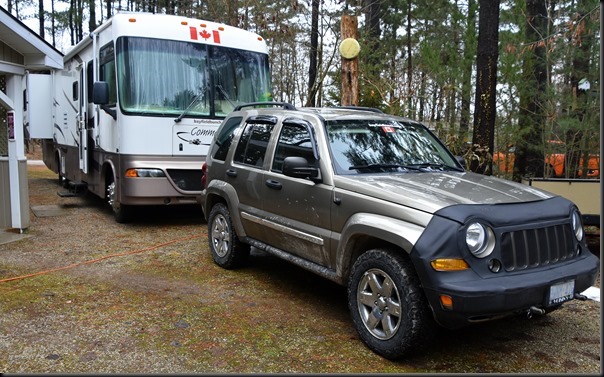 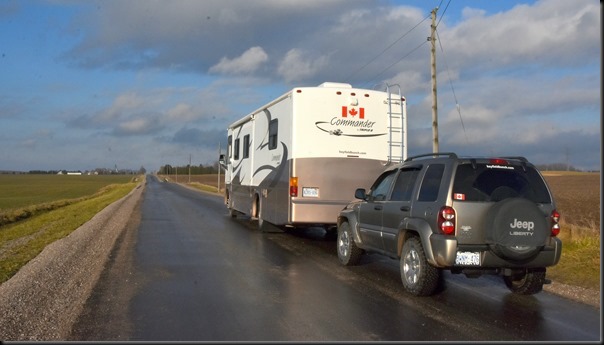 THAT’S BETTER AND EVEN THOUGH IT HASN’T RAINED ALL DAY THE ROADS ARE STILL WET….WHY IS THAT?? 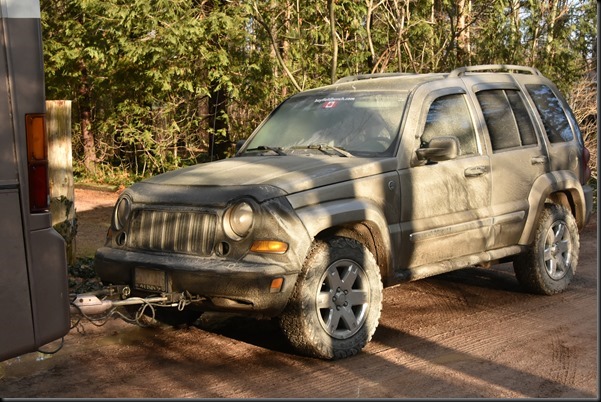 Looks like we’ll take our old faithful route we most always took in our earlier RVing years.  Border crossing at Port Huron then down I-69 through Flint, Lansing, and Fort Wayne to Indianapolis where we’ll head west on I-70 for Effingham Illinois hanging a left turn on I-55 straight south and joining I-57 north of Memphis then swinging onto I-40 west of Memphis making for Little Rock Arkansas and Texarkana Texas.  From there we’ll probably head straight for Dallas making sure not to miss the southern by-pass like we did last year and got all messed up going right through the middle of Dallas and Fort Worth.  Once west of Dallas we’ll head for El Paso and where we go from there we’re not sure yet but we might end up somewhere southeast of Phoenix Arizona.  From our location here in Bayfield I have found this southern interstate route the best for avoiding large cities.  Normally we would go north of Dallas after Texarkana but at this time of year it’s too cold and risky. 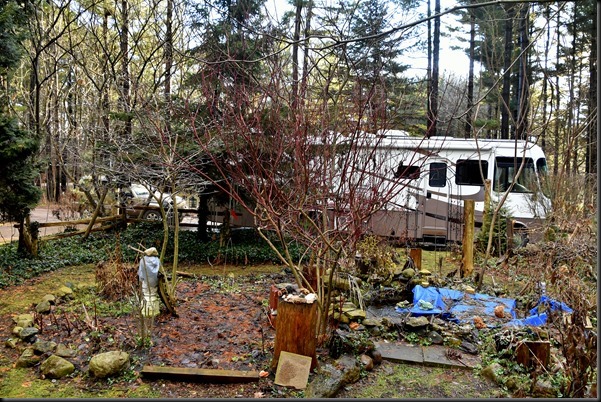 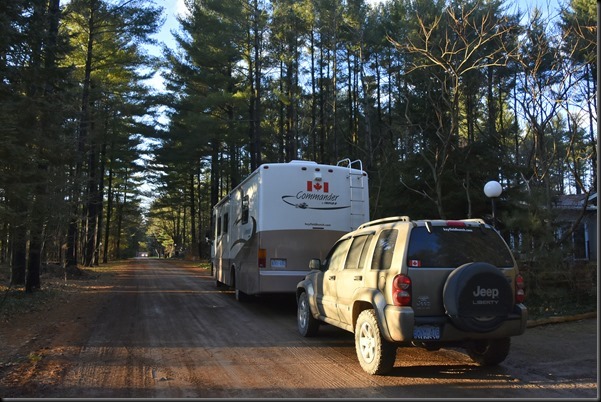 If you don’t hear from us for a few days it will probably mean we are having trouble getting hooked up to our Verizon  internet account.  We’re supposed to be on a really good plan this year but I’ll believe it when I see it. 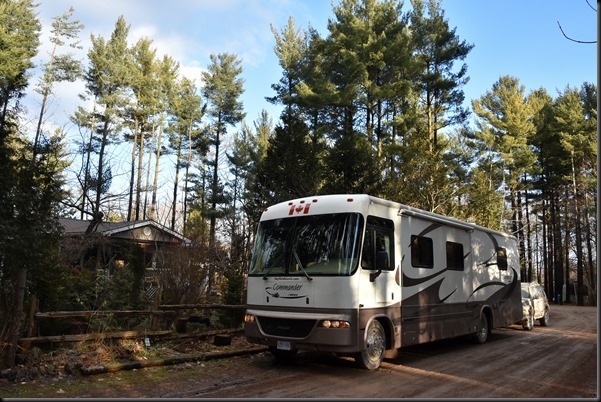 READY TO RUMBLE FIRST THING IN THE MORNING

GROANER’S CORNER:(( Once there was a little boy that lived in the country. They had to use an outhouse, and the little boy hated it because it was hot in the summer and cold in the winter and stank all the time.The outhouse was sitting on the bank of a creek and the boy determined that one day he would push that outhouse into the creek. One day after a spring rain, the creek was swollen so the little boy decided today was the day to push the outhouse into the creek. So he got a large stick and started pushing. Finally,the outhouse toppled into the creek and floated away. That night his dad told him they were going to the woodshed after supper.Knowing that meant a spanking, the little boy asked why. The dad replied, "Someone pushed the outhouse into the creek today.It was you, wasn't it son?" The boy answered yes. Then he thought a moment and said, "Dad, I read in school today that George Washington chopped down a cherry tree and didn't get into trouble because he told the truth." The dad replied, "Well, son, George Washington's father wasn't in the cherry tree."

“My Cardiologist is a Heartthrob!”

Q: Why was Adam a famous runner? A: Because he was first in the human race.

Q: What do you call someone who doesn't pass gas in public? A: A private tooter.

A little girl became restless as the preacher's sermon dragged on and on. Finally, she leaned over to her mother and whispered, "Mommy, if we give him the money now, will he let us go?"