UP OR DOWN RIGHT OR WRONG 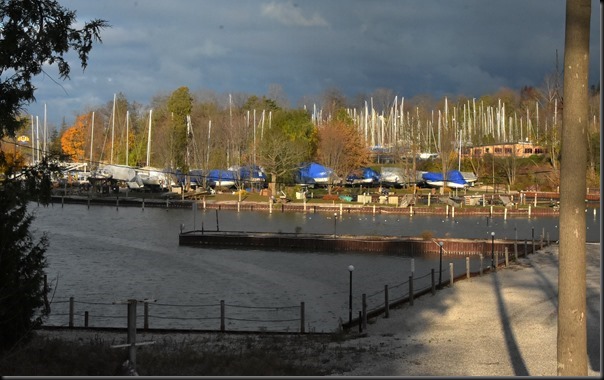 A SPOT OF SUNLIGHT ON BAYFIELD’S INNER HARBOR
Looking out our living room window at first light I was encouraged to see it not raining.  To add a little smile to that encouragement I noticed a few patches of blue sky and a dapple of sunshine touching down through the tall pines onto a cluster of tanned oak leaves across our driveway.  It doesn't take much to lift my spirits sometimes and it is usually Mother Nature who is able to do that.  It is also Mother Nature who can tip me into the dumpster pretty quick too. 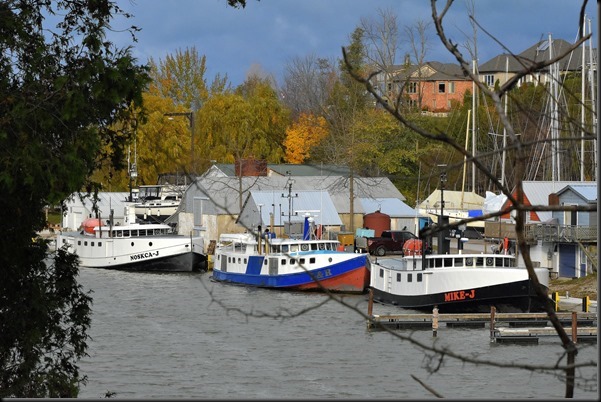 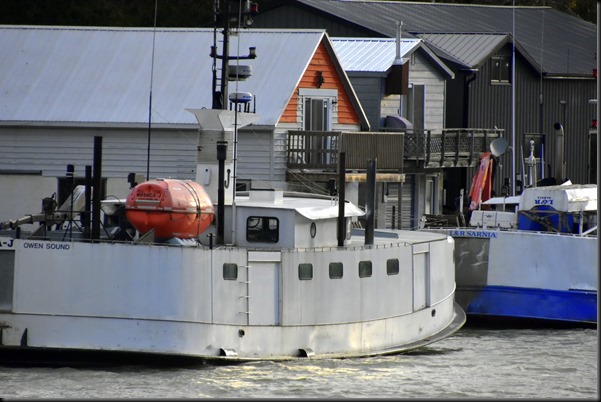 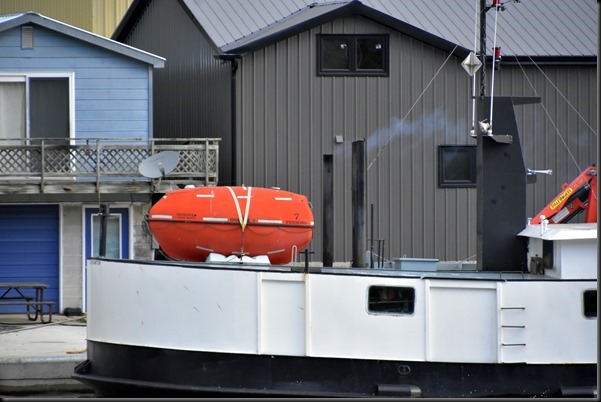 I SEE A BIT OF SMOKE COMING OUT ONE OF THOSE STACKS….ENGINE BURNING OIL OR SOMEBODY COOKING UP SOME BACON BELOW?? 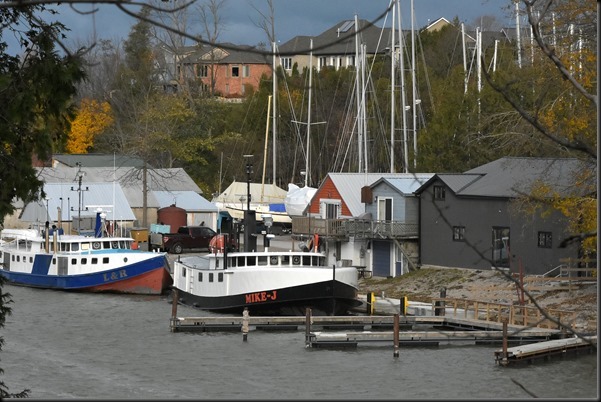 Once Pheebs and I had cleared our Park's forested tree canopy I noticed dark skies out over the lake so we headed for Bayfield's harbor.  Wednesdays high winds had churned up Lake Huron waters causing gray choppy waves to rumble in and break over Bayfield's harbor piers. 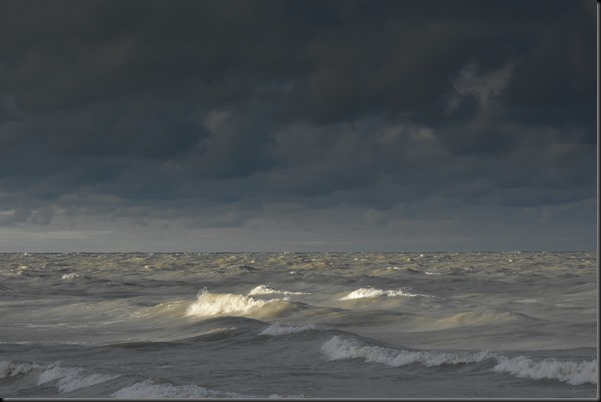 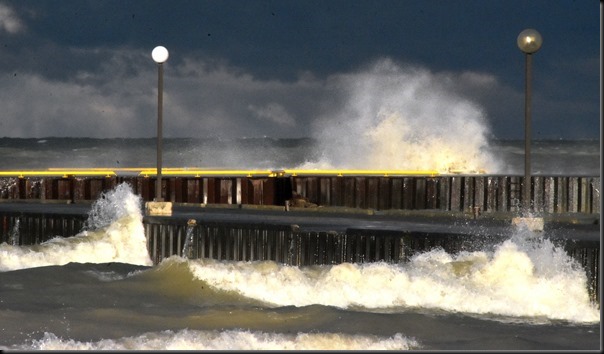 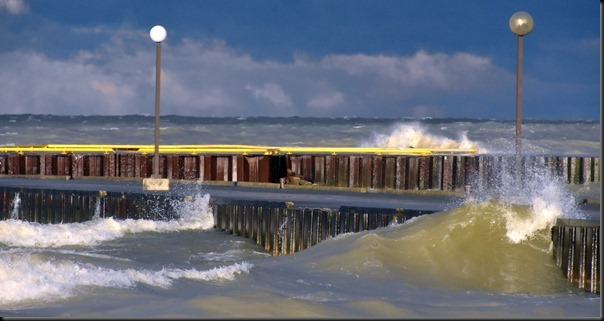 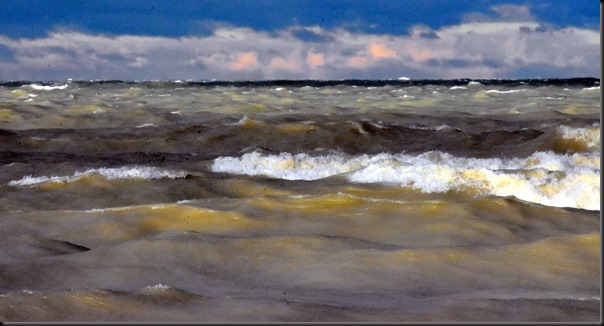 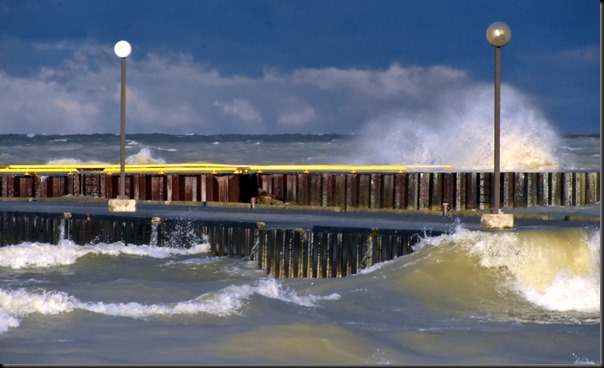 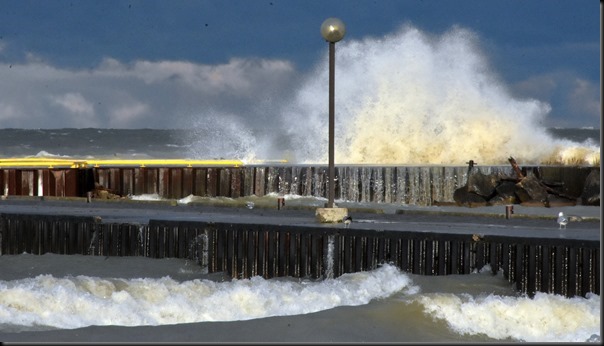 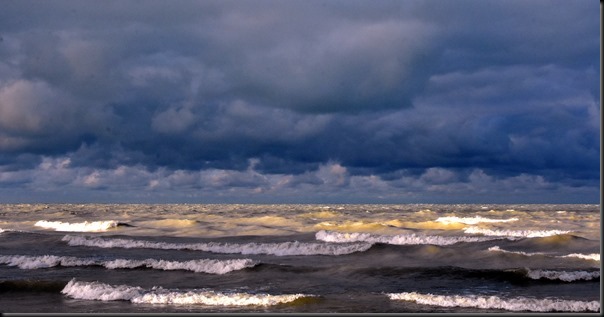 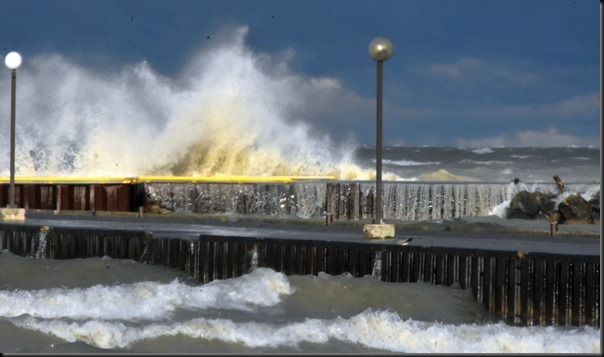 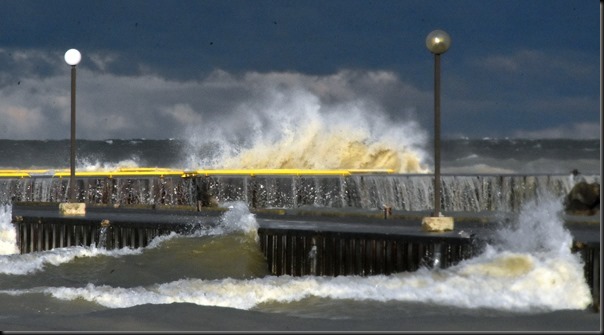 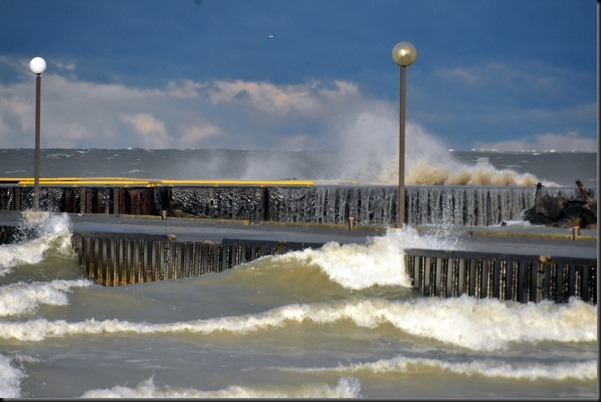 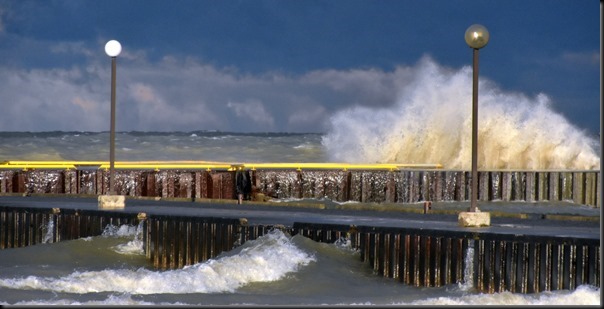 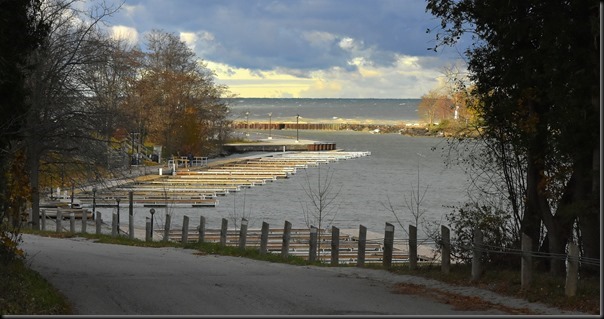 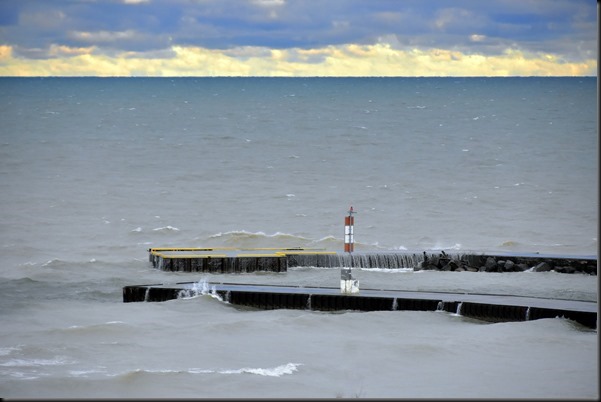 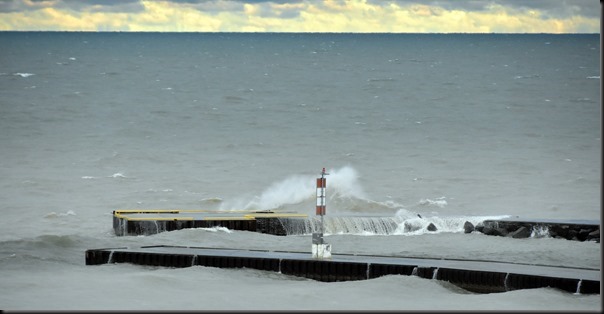 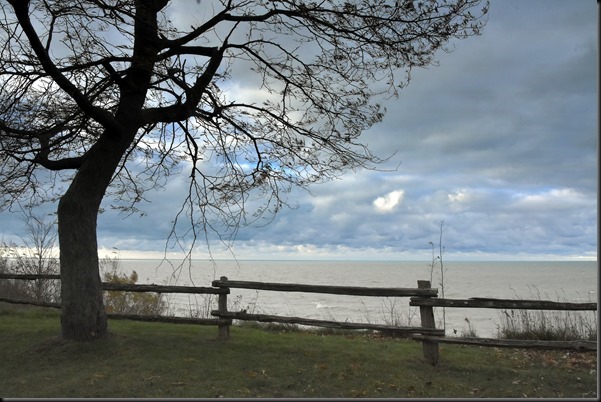 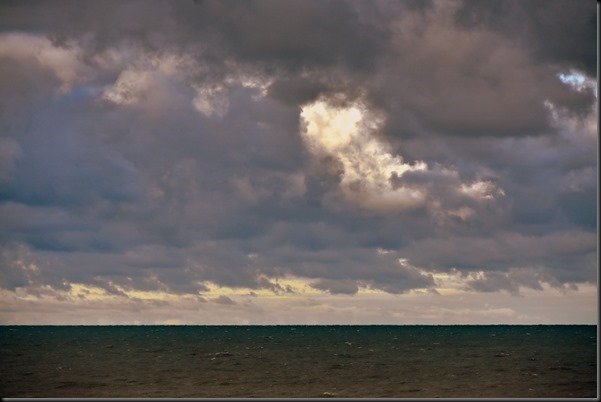 A coffee to go at shopbike coffee roasters along Bayfield's main street and we were soon south of town graveling up Libby's tires again.  Keeping our speed down to about 20 mph we were able to have our front windows down with the heater on.  Pheebs likes to stick her nose out and inhale all those fresh country smells.  I like those smells as well but I keep my big nose inside the Jeep.

LOTS OF BUILDING GOING ON AT THE BAYFIELD MEWS G AND C:))

Had it not been for a few spritzes of rain on the windshield we might have taken a forest walk at the Bannockburn Conservation area but at the risk of a soaking we opted out and rolled on by.

THESE STRAW BALES ARE BEING WRAPPED IN WHITE HEAVY DUTY PLASTIC AND THE WRAPPING MACHINE BEHIND THE PICK-UP TRUCK DOES THAT
Home before ten I immediately insisted myself into some yard work hooking up our utility trailer and hauling a couple loads of accumulated yard waste to our Park's recycling area.  Raked up still more fallen leaves and got our outside water shut off and hoses drained.  Always a nice sense of accomplishment getting things stroked off one's 'to-do' list.  Took down a couple rain soaked bird feeders and will maybe try them again after rainfall has turned to snowfall. 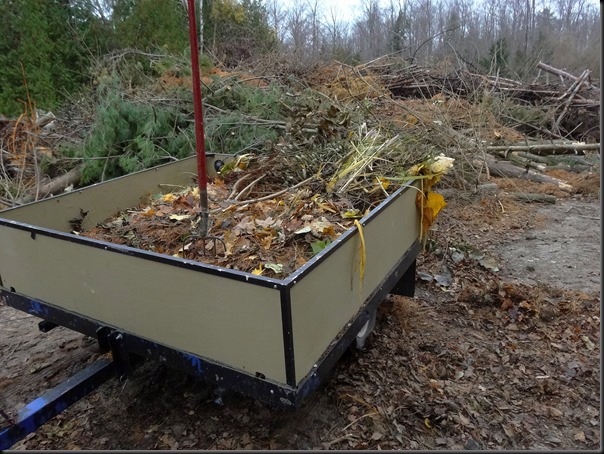 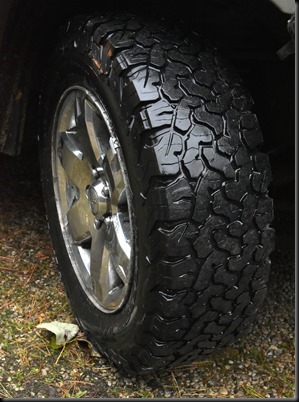 OKAY WHERE’S THAT SNOW! >>>
Below average temperatures for this time of year have local weather experts calling for possible snow in some parts of our area Friday.  We’re in the 30’s at the moment but noticed next week back up into the balmy 40’s maybe.  Beach weather:)) 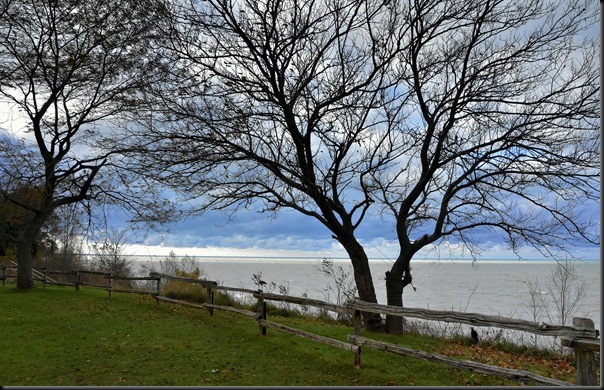 I’m assuming EdD in our Shout Box is perhaps a new reader.  Yes there has been some trying days of late and Wednesday was truly miserable.  Long time readers know I do have my up and down days alright but to say “You always seem so determined to be miserable” is incorrect.  I take exception to the word ‘always’ and although I do have a tendency to get down on myself at times there is another whole up side to me that I believe is very often evident in the majority of my posts.  Being a daily blogger I have a choice every day when I sit down in front of my computer.  I can tell readers honestly how my thoughts and feelings came together for the day or I can fluff and fancy it all up saying everything is wonderful.  The latter part of that sentence is just not me so I plan to stick with the former and keep things honest.  Up or down, negative or positive, good or bad, right or wrong, I try to face each day in realistic way………….. 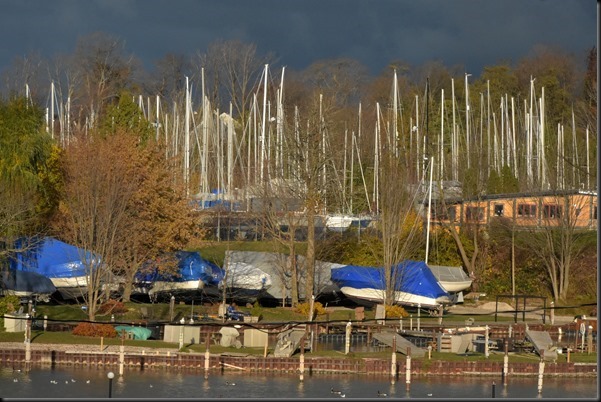 EACH ONE OF THOSE WHITE MASTS HAS A SAILBOAT BELOW IT DRYDOCKED ON LAND FOR THE WINTER
GROANER'S CORNER:((  A newly ordained priest, nervous about hearing confessions, finally asks an older priest to observe how he does and give some tips. After listening in on the second confession, the older priest suggested that the younger man fold his arms, maybe rub his chin with one hand while saying phrases like "I see" or "I understand" or "Yes, my child. Go on". The young priest puts the suggestions into practice and later tells the older priest how much it has helped getting more information from his flock. "You've done well," said the older man. "Isn't that much better than slapping your knee and yelling 'No way! So what happened next?'"
-------------------------------------
- I couldn't repair my brakes, so I made the horn louder.
- Why do psychics have to ask you for your name?
- When I'm not in my right mind, my left mind gets pretty crowded.
- I intend to live forever -- so far, so good!
- “An angry skunk will reek its vengeance.”
- Ambition is a poor excuse for not having enough sense to be lazy.
- Eagles may soar, but weasels don't get sucked into jet engines.
=======================
Posted by Al Bossence at 11/08/2018