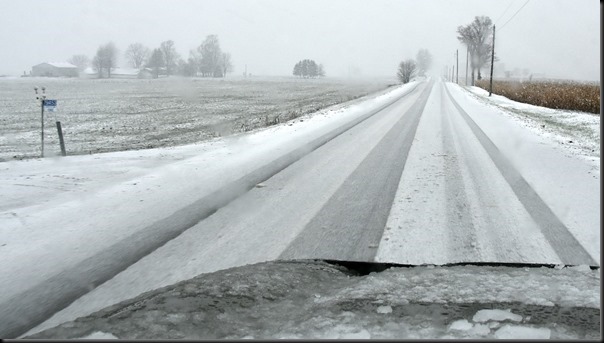 Rains came in the night and turned to wet snow this morning.  Made for slushy roads but the 3 of us piled into the Jeep and headed for Goderich anyway with Pheebs and I again driving Miss Kelly.  A few things to pick up, a few things to drop off and we grabbed some breakfast at Pat & Kevin's on the Square.  A first time there for us and we found it a nice place.  When entering be sure to look up and watch the aerial train going round and round under the ceiling.  Liked the softly played 50-ish and early 60’s music as well.  Goderich’s main street in the business hub downtown is a complete circle so Goderich folks have always called it ‘The Square’.  Ya I know.  Pat & Kevin’s is located in the same block as the OPP (Ontario Provincial Police) station. 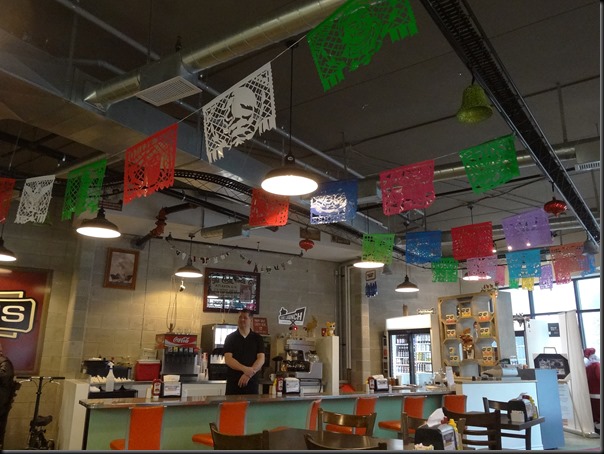 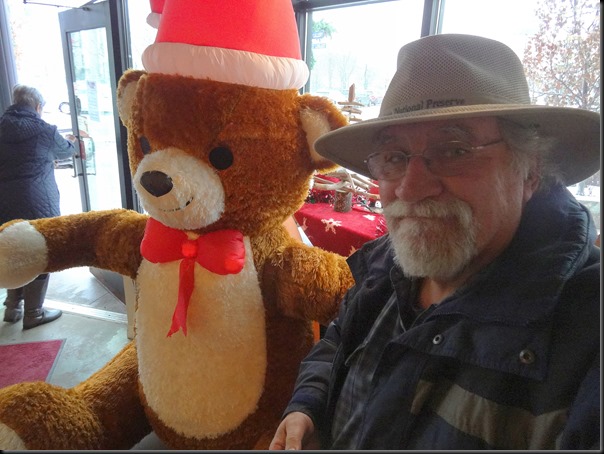 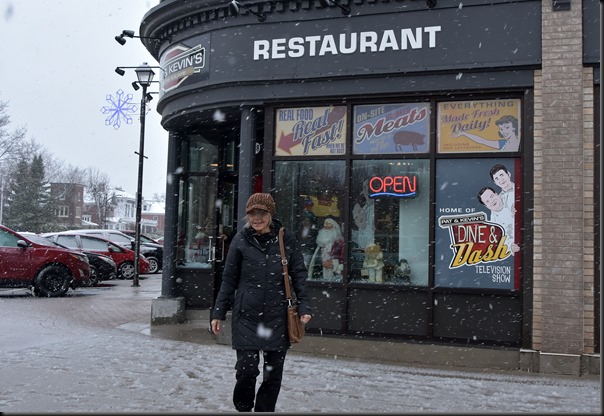 A customary swing down around the harbor didn’t net us any new sightings except for lots of wet snow coming down.  Pheebs got out for a ‘peeps’ and was soon back into the Jeep.  It was our last Goderich stop before making tracks for home.  And yes we actually did make tracks….. through snowy slush all the way on Porters Hill Line. 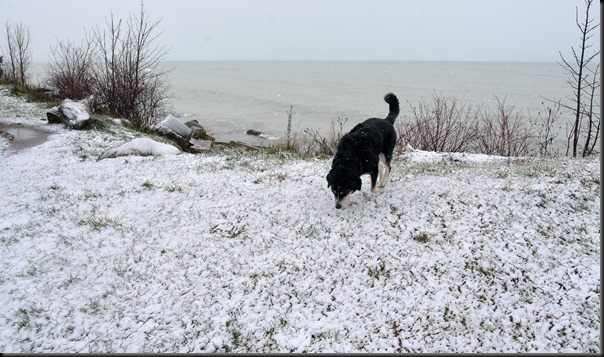 it’s a combination of rain and snow coming down this afternoon and it feels at times like our lives have pretty much come to a standstill now as we struggle to adjust to this unfortunate early winter weather.  Gray days are upon us. 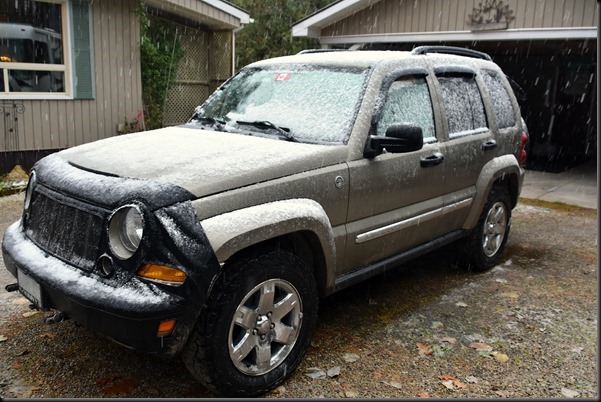 Here’s a little something I have blogged about several times before over the years and still don’t understand the ‘thinking’ behind it.  Yes, America has some frustratingly serious political problems at the moment but why refuse to go there just because you don’t like who happens to be in charge of things at the moment.  Why oh why oh why would a person let politics deny them the countless beautiful areas of America.  The warm winter climates of the southern States, the eye popping beauty of New Mexico, Arizona, Colorado, California, and Utah just to name a few.  Setting all the usual anti-America frenzied exaggerations aside, traveling in America is not like traveling in countries like Iran, Iraq, Libya and others.  Unless you fall into the exaggeration state of mind that is.  Traveling in America is much like traveling in Canada.  We speak the same language, drive the same cars, like the same things, understand each other, and get along well.  If your Canadian and want to go south for the winter then go south.  Don’t sit in front of your television grumbling about American politics.  Just go, enjoy yourself and appreciate what you see.  Never mind what’s going in Washington because they are not minding what’s going on at your house.  Travel America, enjoy the people you meet and enjoy the products you buy.  America has been our second winter home for the past 12 years and had we decided back in 2006 we didn’t like their  governments way of running things then just think of the countless memories and good times we would have selfishly denied ourselves.  There would have been no Bayfield Bunch, no blog and no photos.  We would have just sat here all these winters grumbling at our televisions.  So knock yourselves out fellow Canadians and go have yourselves a great  non-political time south of the border.  We would if we could, maybe we should…………….. 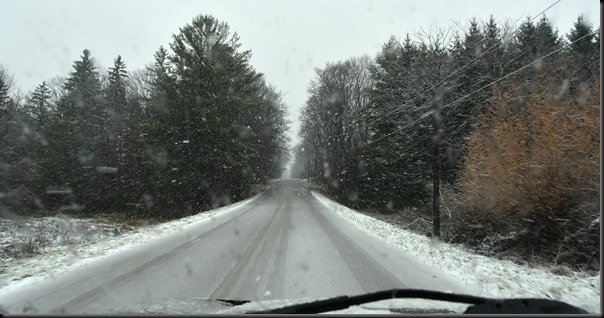 SNOWING ONE MINUTE RAINING THE NEXT

Oh, and by the way America, here’s my suggestion for your next President.  Never mind political parties and all that stuff and focus on the mature integrity of this responsible and respected person who I think could bring much needed honest leadership to your country.  That is if he could be encouraged to throw his hat into the ring.  And it’s not impossible.  Watch this short interview in it’s entirety.   President For 2020. 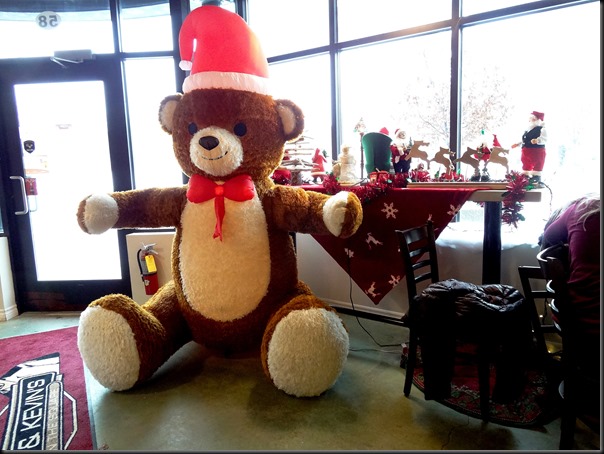 STARTING TO LOOK A LITTLE CHRISTMASY THESE DAYS

GROANER’S CORNER:((   A man was speeding down the highway, feeling secure in a gaggle of cars all traveling at the same speed. However, as they passed a speed trap, he got nailed with an infrared speed detector and was pulled over.The officer handed him the citation, received his signature and was about to walk away when the man asked, "Officer, I know I was speeding, but I don't think it's fair - there were plenty of other cars around me who were going just as fast, so why did I get the ticket?""Ever go fishing?" the policeman suddenly asked the man."Ummm, yeah..." the startled man replied.The officer grinned and added, "Did you ever catch all the fish?"

One Christmas, Joe and Peter built a skating rink in the middle of a field. A shepherd leading his flock decided to take a shortcut across the rink. The sheep, however, were afraid of the ice and wouldn't cross it. Desperate, the shepherd began tugging them to the other side.  'Look at that, 'remarked Peter to Joe, 'That guy is trying to pull the wool over our ice!'