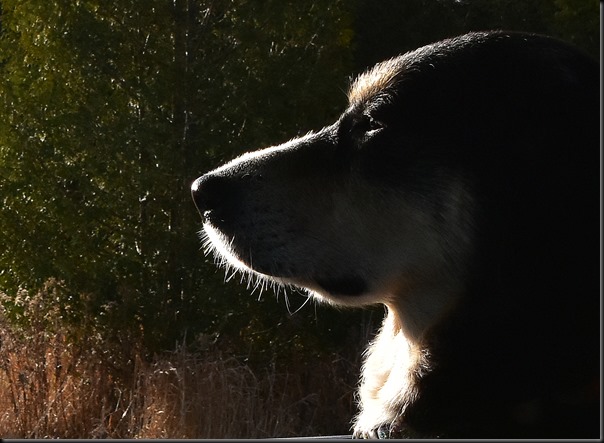 Despite loping off another cherry tree branch Thursday afternoon Kelly spotted Squirrely next climbing up our Sunburst Locust tree where incidentally I had already cut several branches off.  Picking a different branch this time Kelly watched Squirrely ignite his power assisted jet pack and rocket himself from that branch off into outer space only to make a quick re-entry coming down with no drag chute making a perfect four point touch-down landing right on top our bird feeding platform. It was a feat wrongly estimated by me to be impossible.  Undaunted, soon as Pheebs and I got back from our morning ride I hauled out my big tall eight foot step ladder and with clippers and Swede saw in hand down came 3 more branches. Al now regains the lead again at 11-10.  With the biggest and stupidest ‘na-na-na-na-na-na leering sneering grin I could muster I thrust my face into the sunroom window waiting for Squirrely to come back.  When he didn’t show up I figured he  had obviously got word of that rather hideous face in the window and decided to call it a day.  Well at least I hope so because it won’t be long and we’ll have nothing left in our front yard but a big pile of branches and a bunch of tree stumps!! 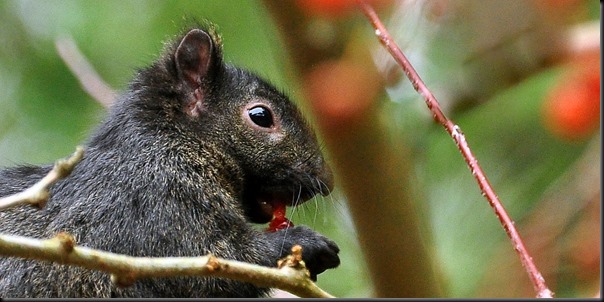 AND THIS IS ‘SQUIRRELY’ 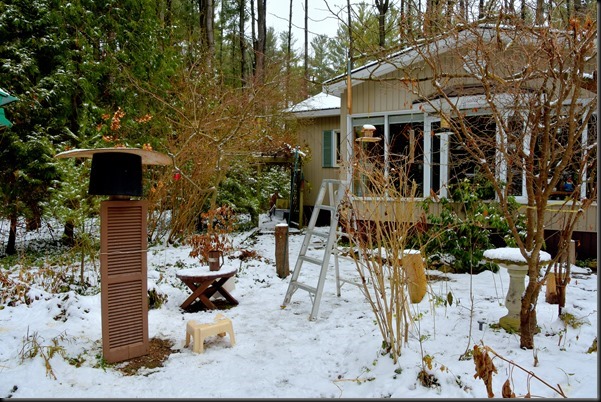 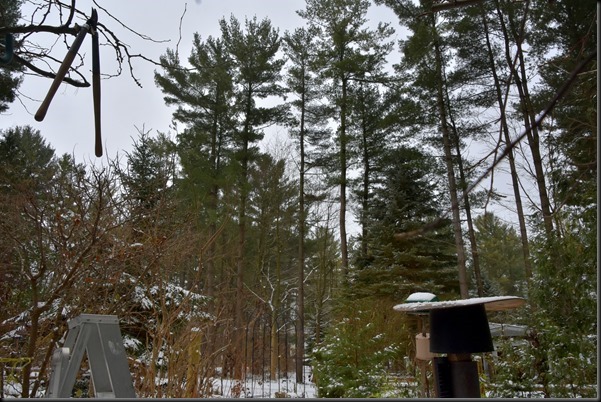 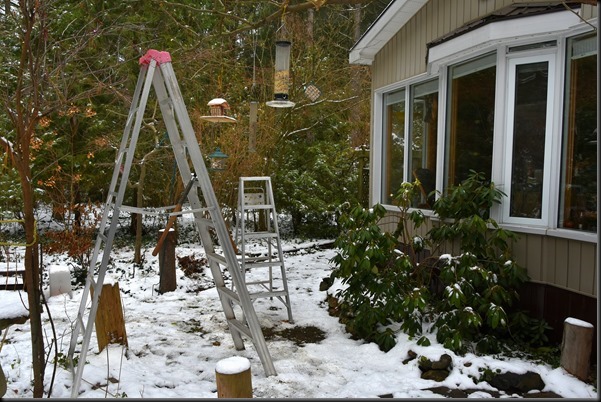 IT SEEMS TO BE A DAILY STRUGGLE WITH THESE SQUIRRELS

Amazingly enough we are heading into a mild spell with temperatures predicted to be in the mid 50’s by Sunday.  Looking ahead to next week I see we may go back into the the freezer again with a number of days below the freezing mark.  And of course cloudy, cloudy, cloudy.  Now it’s not just me who is bothered by all these continuous gray depressing November days but it is Kelly as well and I’m sure all that cold gray dampness played a part in reversing our decision to stay home for the winter.  Because I am the one writing the daily blog it of course seems like I am the one doing all the complaining, but just know…..it’s not all me.  Okay, Okay, mostly me then. 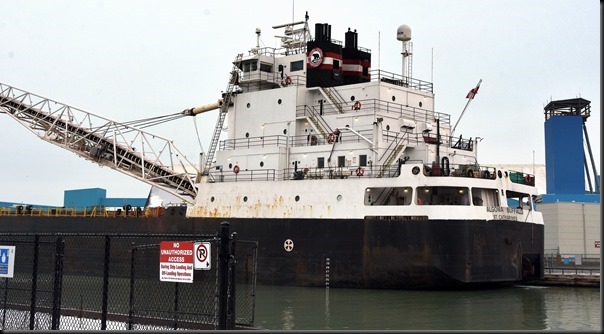 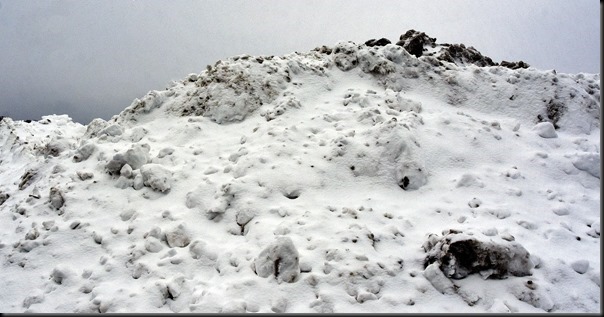 WE SURE HAVE A LOT OF NOVEMBER SNOW IN OUR AREA

OKAY-OKAY HERE’S ALL THAT SNOW IN PERSPECTIVE 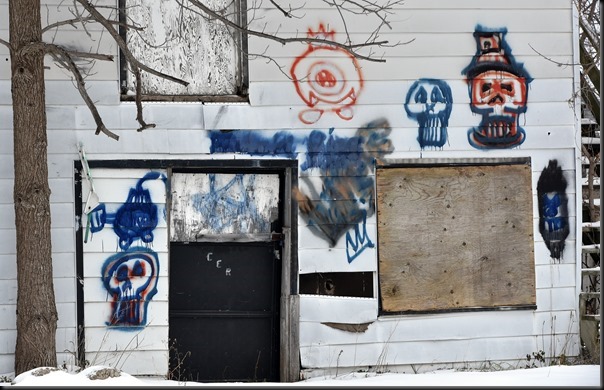 D’ya ever wonder sometimes when thinking back over your life if your memory remembers everything accurately.  Was I really there??  Did that really happen and if it did, did it happen the way I remember it??  I’m sure we all have those moments looking back when we say to ourselves, ‘I can’t believe that happened’.  Another thing I’ve noticed too is there doesn’t seem any point sometimes in telling a story from the past because chances are people are not going to believe it anyway.  I’ve run across this where I’ve kept myself buttoned up for that very reason.  It’s something I’m sensitive to and I’ll tell you why.  In my teens and very early twenties I had a problem.  I didn’t recognize it as a problem at the time but I sure do now and it took me a long time to come to grips with it.

Growing up in a small southwestern Ontario town I wanted to fit in, be liked, be popular and be accepted and not thought of as dumb and stupid.  However as a young boy coming from what I considered to be the wrong side of the tracks and from divorced parents I felt I wasn’t as good as anybody else.  Criticism at home was difficult for me to understand and my way of dealing with that was to exaggerate things and make up stories.  My insecurities pushed me to turn myself into somebody I wasn’t and I would do that by using exaggerations, false bravado, and untrue stories.   I’m sure all my friends knew it and no doubt thought of me as a bullcrapper.  I was reminded of that a couple summer’s ago when two of my closest hometown buddies from back in those days dropped around one day and picked me up.  Jim was driving and his brother John was in the passenger seat while I road in the backseat.  It was a planned get together to re-live some old times.  We had us a great time driving around areas like Kettle Point and Port Franks reminiscing about old times and the fun we had in that area back in the early 60’s.  On the way home we were all chattering away about traveling and Jim mentioned how he had driven out to western Canada and back years ago.  Silly me from the back seat piped up with ‘I drove from Vernon British Columbia to Kitchener Ontario one time in 48 hours and fifteen minutes’.  There was an immediate silence in the front seat and I knew right away what had just happened.  ‘Oh there goes Al bullcrapping again just like he always used to’.   I knew there was nothing I could say after that so say nothing I did.  But it has bothered me ever since because I am very sensitive about that kind of thing now.  I know the dislike I have for those who exaggerate, pass themselves off as people they are not or make up stories to build themselves up.  It is the main reason why in my blog it is of prime importance never to say anything untrue, make exaggerations, deceive or mislead people into thinking something about me that is not true, or to present myself as somebody I am not.

Yes, I do sometimes still exaggerate but it is in a hopefully humorous way.  If I say there must have been at least 63 million cows in a field or somebody passed me on a bicycle at about 800 miles per hour just know I intentionally make those exaggerations so exaggeratable that they are impossible to believe.  Even if they are coming from me.

Oh, and that forty eight hours and fifteen minutes from Vernon to Kitchener.  Well that story is about 98% true.  What I had forgot to add after thinking about it was there was another person along and she drove about 5 of those hours through northern Ontario around Sudbury while I caught some winks.

Well there you have it, another little bothersome thought that’s been rolling around in my head for awhile that finally managed to squeak itself out into my blog.  I’m still hesitant to tell anyone too many past stories though for fear that…….well you know, you wouldn’t believe me anyway:)) 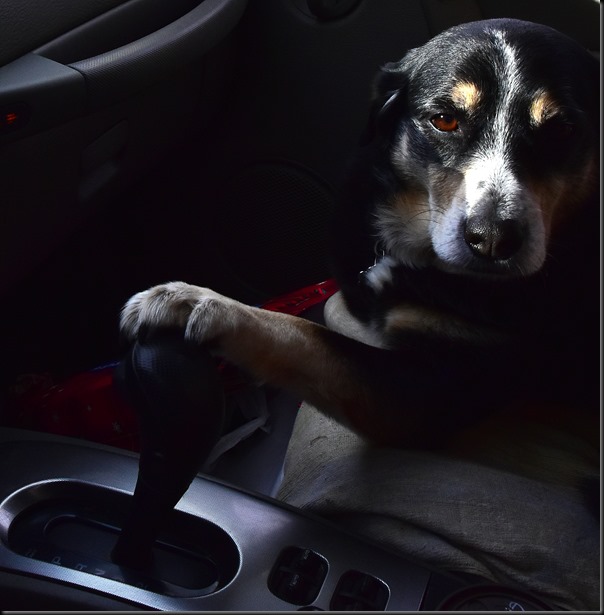 GROANER’S CORNER:(( I took the day off work and decided to go out golfing. I was on the second hole when I noticed a frog sitting next to the green. I thought nothing of it and was about to shoot when I heard, "Ribbit 9 Iron." I looked around and did not see anyone.Again, I hear, "Ribbit 9 Iron." I looked at the frog and decided to prove the frog wrong, put my club away, and grabed a 9 iron. Boom! I hit it 10 inches from the cup! I was shocked and said to the frog, "Wow that's amazing. You must be a lucky frog, eh?" The frog replied, "Ribbit Lucky frog." I decided to take the frog with me to the next hole. "What do you think frog?," I asked "Ribbit 3 wood." I took out a 3 wood and, Boom! Hole in one! I was befuddled and did not know what to say!By the end of the day, the I had golfed the best game of my like and asked the frog, "OK where to next?" The frog replied, "Ribbit Las Vegas." We went to Las Vegas and I said, "OK frog, now what?" The frog said, "Ribbit Roulette." Upon approaching the roulette table, I asked the frog "What do you think I should bet?" The frog replied, "Ribbit $3000, black 6."Now, this is a million-to-one shot to win, but after the golf game, I figure what the heck...Boom! Tons of cash comes sliding back across the table. I took my winnings and got the best room in the hotel.I sat the frog down and said, "Frog, I don't know how to repay you. You've won me all this money and I am forever grateful."  The frog replied, "Ribbit Kiss Me." I figure why not, since the frog had done so much for me, he deserves it. With a kiss, that frog turned into a gorgeous 18 year old woman."And that, your honor, is how the woman ended up in my room, so help me God or my name is not William Jefferson Clinton."

Happy to say at time of posting tonight I have not seen Squirrelly on the bird stataion again.  Not even once.  Could it be. could it be??:))

What did the reindeer say before launching into his comedy routine?  This will sleigh you.

Christmas: The time when everyone gets Santamental.

How do you know Santa has to be a man? No woman is going to wear the same outfit year after year.

The judge asked the defendant what he was charged with.  "Doing my Christmas shopping early," was the reply. "That’s not illegal!. How early were you shopping?" "Before the store was open."