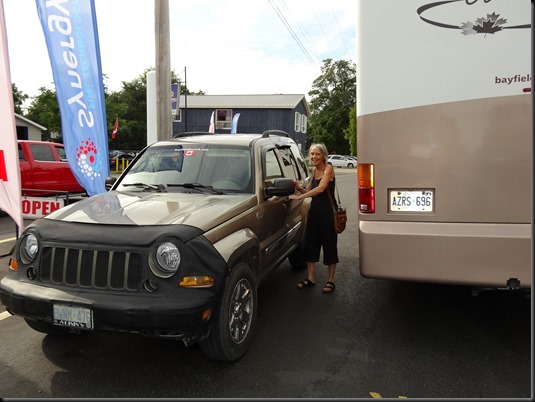 PICKING UP THE MOTORHOME AT THE BAYFIELD GARAGE LATE THIS AFTERNOON

Sixty five degrees outside this morning:)))))))  A light rain in the night had me worried but luckily it quit.  The manifold repairs on the Motorhome had to be done outside and had it been raining it was agreed the Motorhome repairs would have had to be  re-scheduled.  With a weather eye to the sky I had the rig at the Bayfield Garage slightly before eight. 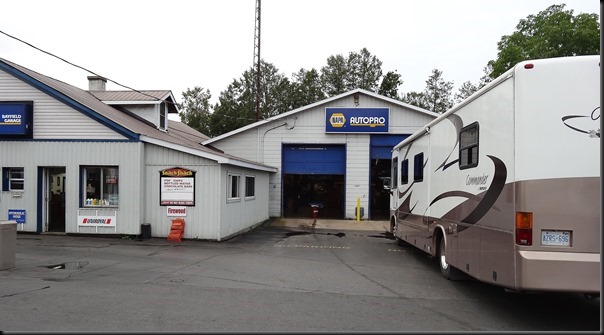 Right on time a burgundy colored Chevy van pulled into the parking lot and scooped me.  Richard and I were off and running with our coffee travels this morning taking us up to Goderich and back with a few lakeside roads in between.  Drove by the Bayfield Garage about mid morning a few times to see how things were progressing on the coach and when we saw a mechanic fellow swinging a sledge hammer inside the driver’s side front wheel well we knew everything was progressing normally.  Well Okay……maybe he wasn’t swinging a sledge hammer but we did see a fellow working on it.  We both agreed it was better somebody else doing that nasty job than either one of us. 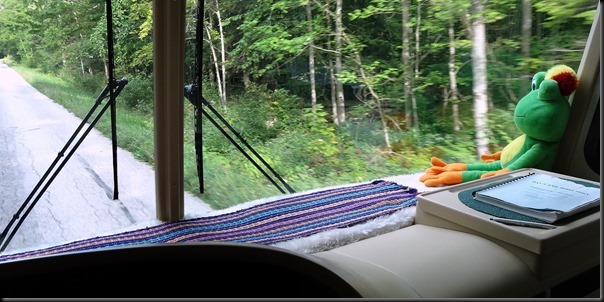 WITH THE REPAIRS DONE IT WAS A NICE QUIET DRIVE HOME

Cloudy skies overhead and what a HUGE RELIEF it is with temps at 68F instead of near 88 like Wednesday.  Feeling soooooooooooo much better and how nice to be outside without being all slimed up by the heavy humidity.  No comparison between yesterday and today and how nice to have decent healthy weather upon us again.  Didn’t even have to run the noisy A/C today.  Nice, nice, nice.  Don’t know how many times today I thought of carrying some things out the Motorhome then remembered the Motorhome isn’t here…..it’s at the garage. 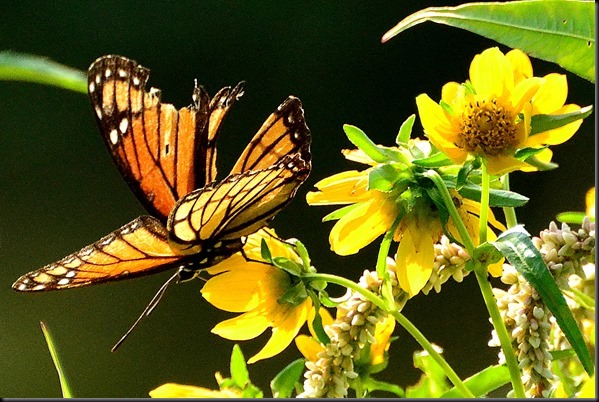 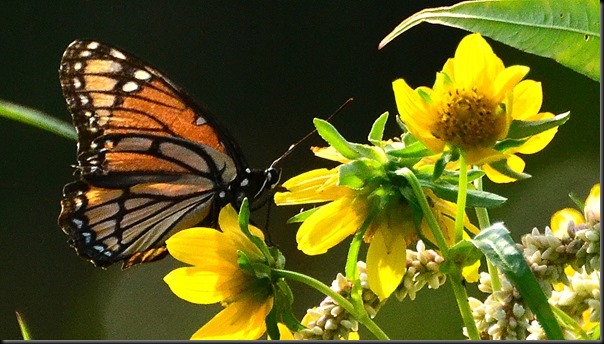 Due to cooler air this morning I was able to get a few little outside things done.  A few days ago I moved our bird feeding platform to discourage a chipmunk from climbing up a nearby plant, jumping onto the platform, and eating all the birdseed.  Well that was fine until I unwittingly dug in poled green birdfeeder 3 feet away to support the tall bent over plants.  Perfect…..for the chipmunk.  Now he simply scurried up the tall plant stems, stepped onto the birdfeeder, then launched himself with oodles of grace and flair into the air across 3 feet of space onto the platform again.  I took down the poled green birdfeeder this morning.  Back to the drawing board. 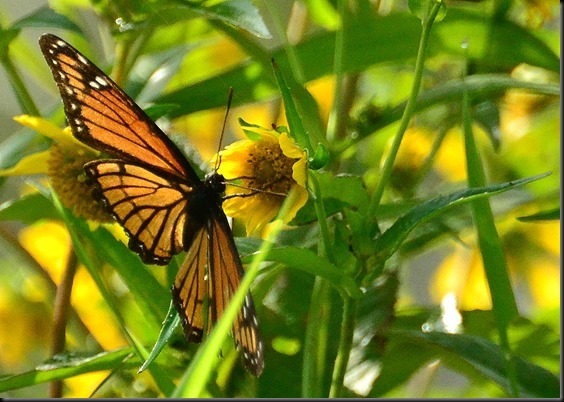 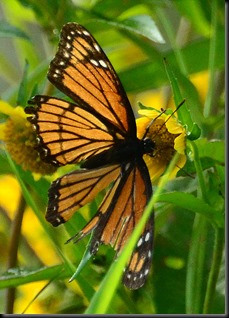 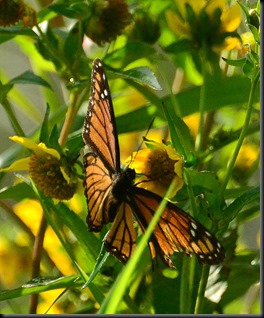 Been meaning to fix a garden gate for a couple years so I tackled that this morning as well unaware the humidity was sneaking up on me again.  That was brought quickly to my attention when a whole mob of Mosquitos set upon me.  With my shirt once more sticking to me I made fast tracks for the house.  Although our air is noticeably cooler we still have to get rid of that damn humidity in the air.  I’m thinking late December maybe but good news on the weather channel tonight.  Much cooler tomorrow and to borrow a few words from George over at ‘Our Awesome Travels’……’We Lovin It’:))))) 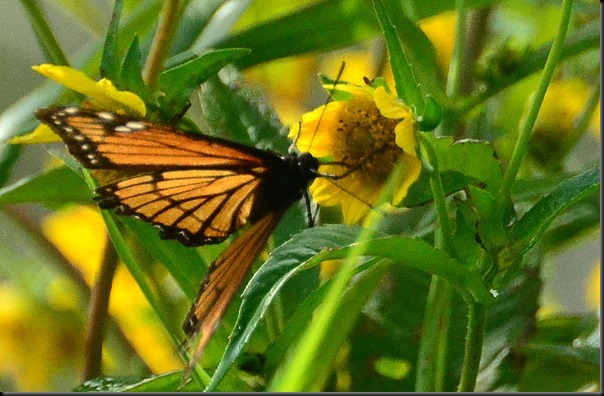 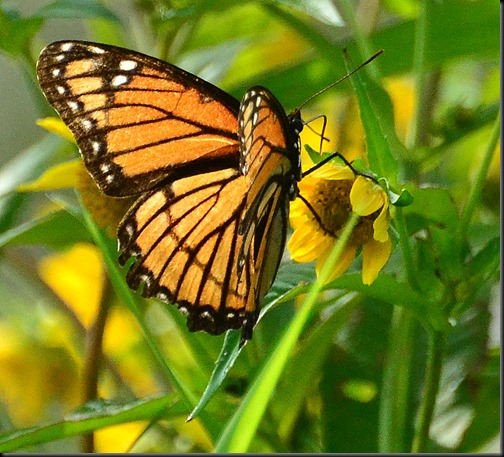 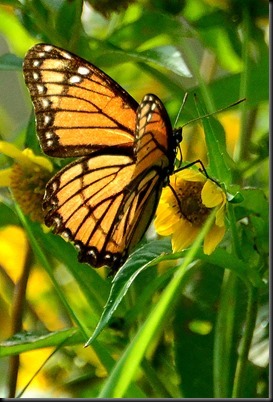 Late this afternoon I decided to take a drive into the Bayfield Garage to see how things were coming along with the rig’s manifold repair.  I was fully expecting it to be there over night.  Just as I pulled in a very familiar looking Motorhome was just pulling out and heading down the highway.  Figured that was a good sign.  And it was.  Minutes later it was back and a beaming mechanic hopped out and said, ‘it’s all done and ready to go’.  He said the job went much better than he had expected and the two bolts he was most worried about turned out to be not so bad.   The garage had phoned earlier in the day saying the mechanic was recommending new spark plugs as well so we had that done too.  It had been on my mind about the plugs for awhile now but had forgot to mention it.  The coach is a 2003 and we’ve had it 4 years with no plug change.  The mechanic said to me. ‘I don’t know what kind of gas mileage you were getting before but your going to get better mileage now for sure.  He said the plugs were bad and has saved them for me to look at tomorrow morning when I go back to pay the bill.  They didn’t have the paperwork done yet so Don the owner said just take the rig home and settle up tomorrow.  One of the nice homey advantages of a small town garage eh:))

DRIVER’S SIDE OF THE ENGINE……ANOTHER WELL DONE JOB BY THE BAYFIELD GARAGE:))

Slipped over to Richards after supper tonight.  We had us a mission.  A large King size mattress needed to be moved out, loaded on a trailer, and taken to a storage facility in Goderich.  Richard is one of those guys like myself who prefers to try and do everything himself and only resort to asking for help as a last resort.  A big floppy King size mattress is a last resort so between the two of us we had ourselves quite a struggle but to make a long story short we wrestled it out of the house, onto his tow dolly trailer and transported it along with rails and two box spring section to Goderich.  We then manhandled everything neatly into their storage locker, closed the door and headed for a take-out coffee at McD’s.  Nice drive home with a big Lake Huron sunset following us all the way.  We were back by 8 and nobody even got hurt once.  Between the two of us no matter what it is we can always seem to turn everything into an enjoyable adventure:)) 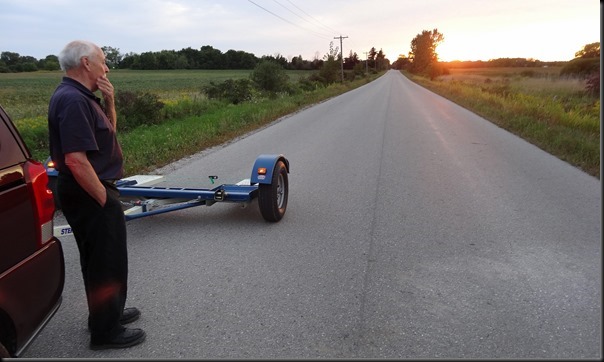 Middle age is when you are warned to slow down by a doctor instead of a policeman.

A clean desk is a sign of a cluttered desk drawer.

Anything worth taking seriously is worth making fun of.

To sit alone with my conscience will be judgment enough for me.

An escalator never breaks.  it only becomes stairs.

When you get older, lack of pep is often mistaken for patience.

The secret of success is to know something nobody else knows.

What will today's younger generation tell their children they had to do "without"?

If you're doing the speed limit, you're in the way. 18 out of 10 schizophrenics agree.

It's not an optical illusion. It just looks like one.

Bumper Sticker: Excuse me for driving so closely in front of you.

Today is the last day of your life, so far.

No man really becomes a fool until he stops asking questions.

People never grow up; they just learn how to act in public.

One half of the world will never understand the other half and it doesn't matter which half you're in.

I've discovered the whole problem with the National Debt.  Most of us work 5 days a week and the government spends 7.

You'll notice that a turtle only makes progress when it sticks out its neck.

No matter how bad it gets, I'm rich at the dollar store.

The tongue must be heavy indeed, because so few people can't hold it.

The minute a man is convinced that he is interesting, he isn't.

If you want to know more about paranoids, follow them around.

Anything not nailed down is a cat toy.

The reason Las Vegas is so crowded is that no one has the plane fare to leave.

“People are always telling me to keep my nose to the grindstone, but I'm afraid that will cause me to lose face.”