CAMPBELLTON NEW BRUNSWICK TO MIRAMICHI NB:: A LEISURELY DRIVE ALONG CHALEUR BAY AND THE GULF OF ST. LAWRENCE

ACROSS THE GULF OF ST. LAWRENCE LIES THE GASPE PENINSULA WHERE WE JUST CAME FROM

Kicked our morning off under clear sunny skies with temperatures hoovering just above the freezing mark.  Unfortunately our front furnace failed to ignite again but with our rear furnace working Okay it threw some heat into the front of our coach where I remained curled up in my recliner almost lifeless under a ton and a half of blankets and anything else I could throw on top of myself including the dog. 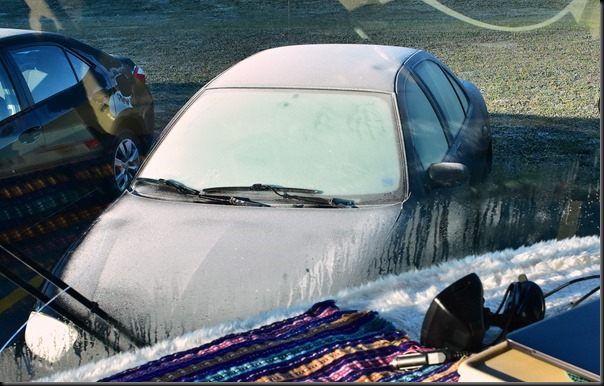 IT WAS A FROSTY START TO OUR MORNING

THESE ARE TIDAL SHORES AFFECTED BY THE ATLANTIC OCEAN

We rolled out around 8:30 New Brunswick time and in the next few hours stopped at 4 different RV places along the way with all being the same result.  Nobody had time to look at our furnace, and they all said they were short staffed because it was Moose hunting season.  We also noticed Quebec’s long reaching influence here in northern New Brunswick as well.  We are still seeing many signs and store names in French.  Not all, but many.  If there is any English on the sign it’s generally at the bottom.  I think it’s going to be awhile yet before we shake off this feeling of being in a foreign country. 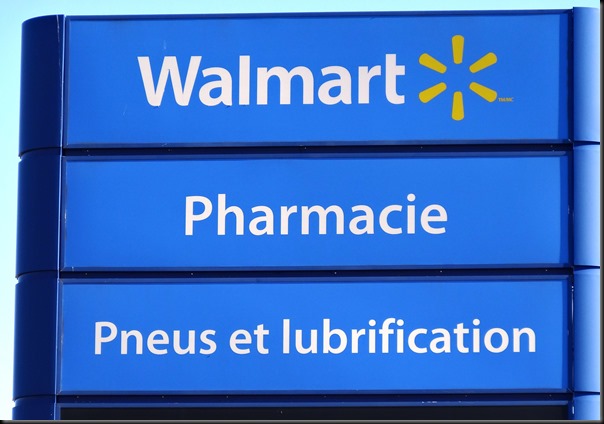 PHARMACIE WE UNDERSTAND BUT WHAT THE HECK IS THIS ABOUT COMING IN AND GETTING YOUR PNEUS LUBRIFICATED!!

From Campbelltown we ambled along at a leisurely pace following highway 134 along the shores of Chaleur Bay.  Hardly any traffic on this road and it was nice going through the tiny towns along the way.  Dalhousie, Charlo, New Mills, Nash Creek, Belladune, Pointe-Verte, Petit Rocher, Beresford, and Bathhurst.  We went right through all of them.  A very relaxing scenic sunny Monday morning drive.  Not so relaxing each time we stopped at an RV place and were told they didn’t have time to look at our furnace problem though:((

It was early afternoon when we reached Miramichi New Brunswick and decided to call it a day.  Too tired to drive around looking for a Park or out of the way spot for the night we slipped into an easy Walmart right beside highway 8 and shut it down.  It was 1:15 p.m.

We have Prince Edward Island in our sights but with two days of rain headed into the area starting Wednesday we’re not sure how we are going to handle that.  We were hoping to have us a couple nice weather days on the Island.  I’m sure we’ll figure it out. 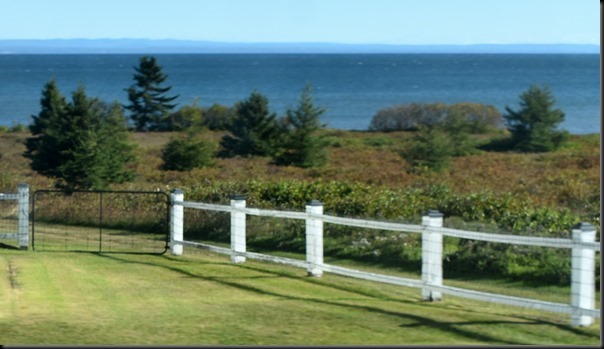 Had us a relaxing afternoon with warming sunshine pouring through the rig’s windows.   Pheebs and I had our afternoon walk and Kelly browsed around in Walmart for a bit.  Not feeling the need for a people fix I decided to forego the Walmartian walk-a-round.

IN MIRAMICHI WE CROSS OVER THE MIRAMICHI RIVER LEADING TO MIRAMICHI BAY AND THE GULF OF ST. LAWRENCE 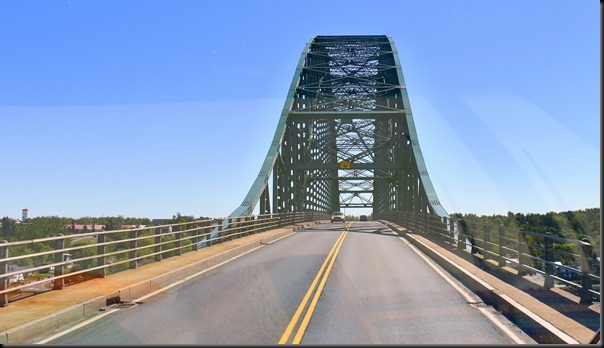 We have only been on the road little more than a week and already we both noticed how we seem to be tiring more easily than other years even though we are in no rush to be anywhere.  I dozed off right at my keyboard while typing this around 3 this afternoon.  Yes, there’s no doubt about it anymore………we will definitely be making changes to any future RV travels after we get home in another month or so.  Knowing for some time now our best long distance RVing days are behind us we have to adjust to a different way of doing things next year.  Probably a smaller RV with the idea of doing more frequent trips closer to home.  Looks like we might just have to get used to the darned old cold Canadian winters again too and that’s all there is to it.  Pheebs is really missing her morning Jeep rides…………….. 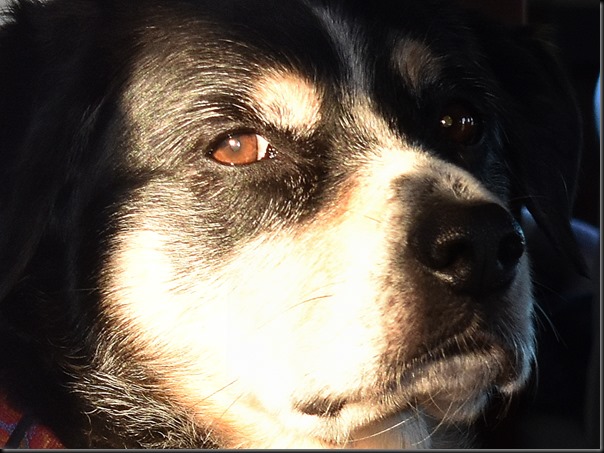 GROANER’S CORNER:((  A plane was taking off from Kennedy Airport. After it reached a comfortable cruising altitude, the captain made an announcement over the intercom."Ladies and gentlemen, this is your captain speaking. Welcome to Flight 293, nonstop from New York to Los Angeles. The weather ahead is good and therefore we should have a smooth and uneventful flight. Now, please sit back and relax....AAHHHHH! ....DAMMIT!"The passengers sat in silence, waiting for terrible news.Then, the captain came back on the intercom and said, "Ladies and Gentlemen, I am so sorry if I scared you earlier, but while I was talking, the flight- attendant brought me a cup of coffee and spilled the hot coffee in my lap. You should see the front of my pants!"A passenger in Coach said, "That's nothing. You should see the back of mine!"

“The best mathematicians amongst the snake families are the the Adders.”

- A donkey is a horse designed by a study team.

- A fail-safe circuit will destroy others.

- A fool and his money are soon elected.

- A fool and his money stabilize the economy.

- A friend in need is a pest indeed.