THE FARTHER I GO THE FURTHER I CONFUSE MYSELF 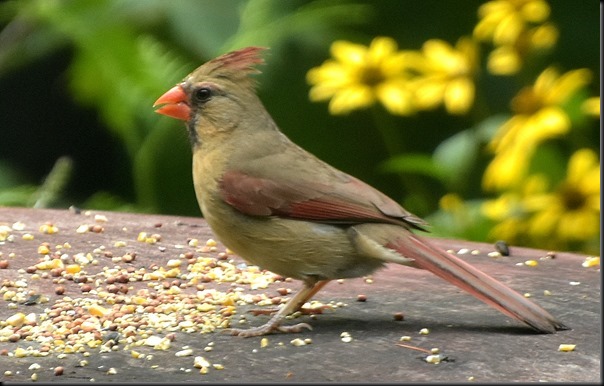 Through our Park's pine trees I could see dapples of a deep orange sunrise.  Temperatures were already 76F and it was unusually windy for that time of day but thank heavens for the wind in the already too hot and humid air.  The consolation to all this was the cooler air the hot air storm front is expected to usher in sometime Wednesday.  Predictions this year are for a warm Autumn here in these parts.

Our morning Jeep ride was a basic repeat of Monday mornings drive with the exception of dropping into the Bayfield Garage.  Made a Motorhome appointment for an oil change Thursday morning as well as a look at the dash A/C to see why it isn't blowing cold air.  ABS light on dash is staying on and they will check all the tires.  Soon as that is done the Jeep goes in for an oil change as well.  With predictions of a warm Autumn and our aversion to humidity we really do need to have that dash air working. 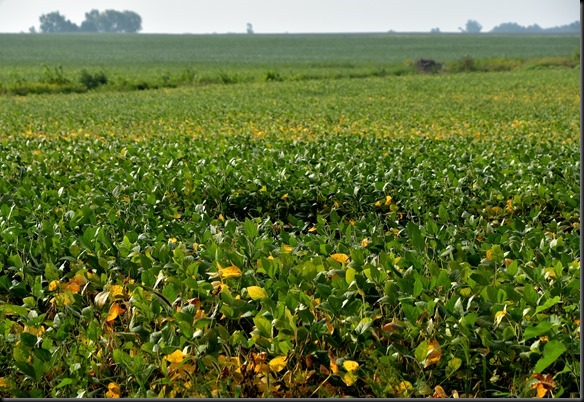 AREA BEAN FIELDS ARE BEGINNING TO RIPEN UP

Under cloudy skies with a few drops of rain here and there I decided to forego a morning coffee again so from Bayfield Pheebs and I plodded along southeast of town with half an eye out for photos.  Couldn't seem to get myself into photo mode.  And again my energy was sapped and I hadn't really done anything.  Returning home I spent a sizeable chunk of the day slumped in my recliner again.  Sun poked it's nose through the cloud cover around 10:30 but it was too dastardly humid for me to set foot out the door.  Our skies finally cleared and we ended up under clear blue skies.  By the end of the day we had both a heat advisory warning as well as an overnight storm advisory as well with a fast moving storm headed our way packing high winds. 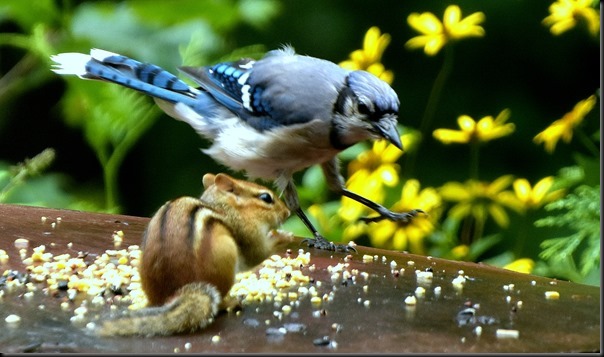 ‘HEY WHAT ARE YOU DOING HERE YA FURRY VARMINT’!!!!! 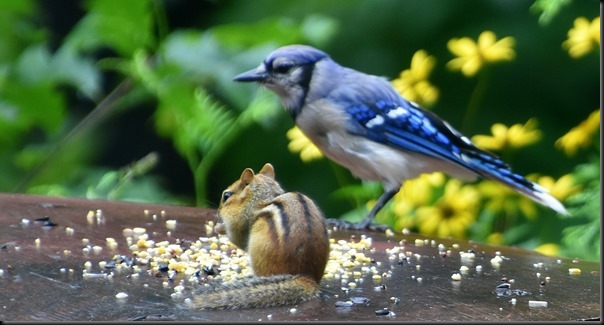 ‘THIS IS BIRDSEED NOT CHIPMUNK SEED’!!

‘GEEEEZZZZZ THAT STRIPED LITTLE VARMINT TICKS ME OFF’!!

‘DON’T CALL ME A STRIPED VARMINT YA BLUE BUZZARD’!! 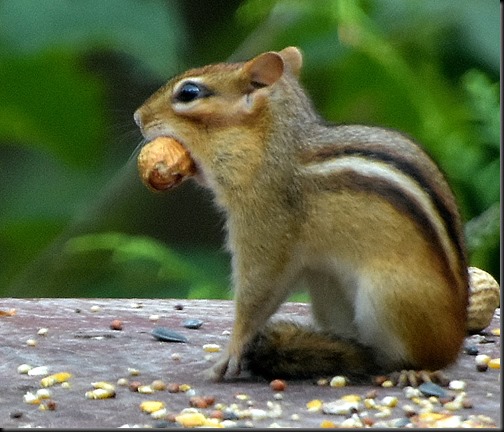 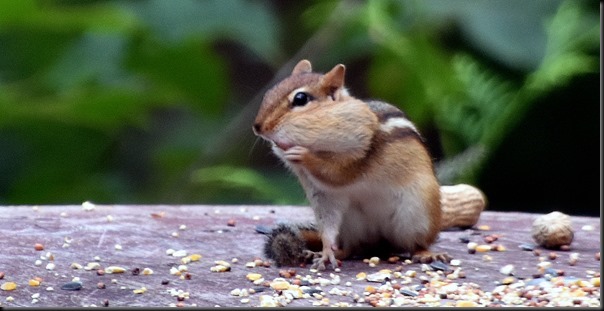 Kelly had brought a DVD home from the library last week titled Far From Home (Canada and the Great War) so figured it was a good afternoon in this heat to sit back in cool comfort and watch this 3 disc documentary on Canada's involvement in the First World War.  Interesting, Educational, and well done.  Only problem I had was trying to keep myself awake.  Not that it was boring but simply because I could hardly keep myself awake.  Doze off-rewind, doze off-rewind, doze off re-rewind. 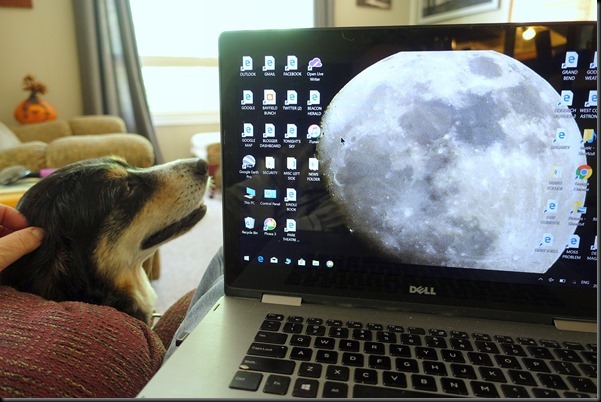 ‘CAN WE GO TO THE MOON SOME DAY DAD’? 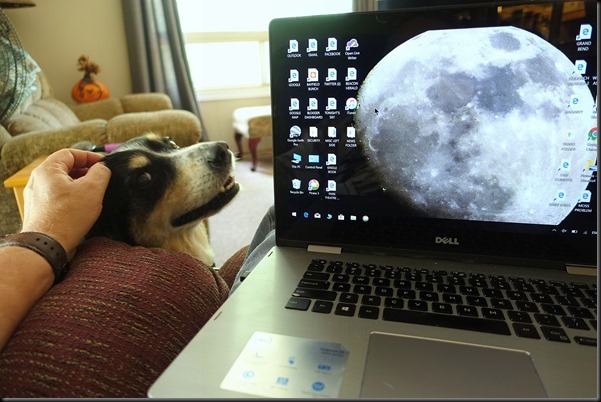 ‘YES WE CAN PHEEBS, MAYBE SOON’ 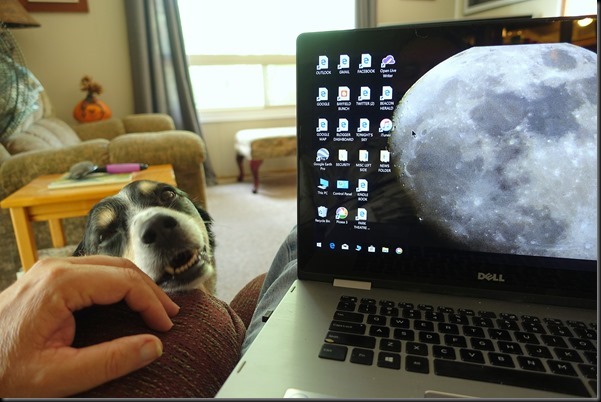 ‘I WOULD REALLY LIKE THAT DAD’  ‘I WOULD TOO PHEEBS’ 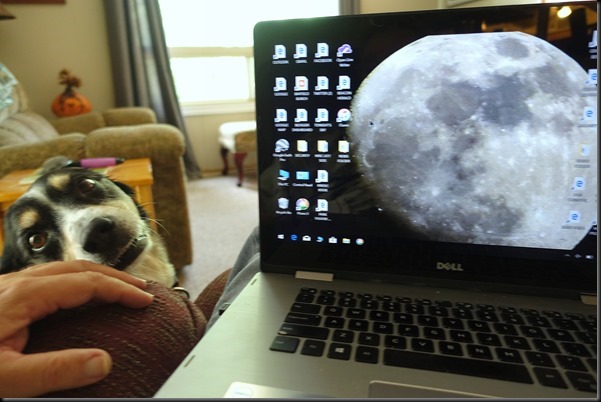 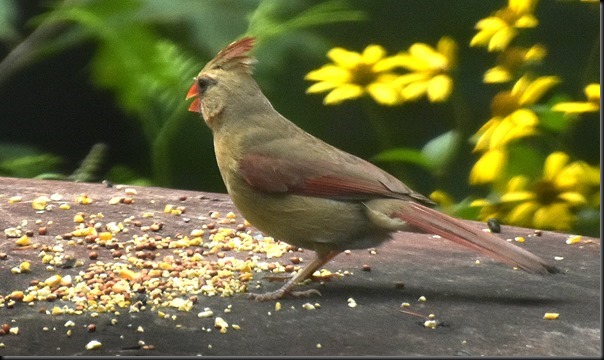 GROANER'S CORNER:(( The beguiling ideas about science quoted here were gleaned from essays, exams, and classroom discussions. Most were from 5th and 6th graders. They illustrate Mark Twain's contention that the 'most interesting information comes from children, for they tell all they know and then stop.

Q: What is one horsepower?

A: One horsepower is the amount of energy it takes to drag a horse 500 feet in one second.

- Talc is found on rocks and on babies.

- The law of gravity says no fair jumping up without coming back down.

- Rainbows are just to look at, not to really understand.

- Someday we may discover how to make magnets that can point in any direction.

- A vibration is a motion that cannot make up its mind which way it wants to go.

- Lime is a green-tasting rock.

- Many dead animals in the past changed to fossils while others preferred to be oil.

- Genetics explain why you look like your father and if you don't why you should.

- Vacuums are nothings. We only mention them to let them know we know they're there.

- To most people solutions mean finding the answers. But to chemists solutions are things that are still all mixed up.

- Water vapor gets together in a cloud. When it is big enough to be called a drop, it does.

- Rain is saved up in cloud banks.

- In some rocks you can find the fossil footprints of fishes.

- A blizzard is when it snows sideways.

- A hurricane is a breeze of a bigly size.

- A monsoon is a French gentleman.

- Thunder is a rich source of loudness.

- “Ever since I switched to wrinkle free shirts my laundry issues have been less pressing.”

- Just remember: when you go to court, you are trusting your fate to twelve people that weren't smart enough to get out of jury duty!

A mother and her young son returned from the grocery store and began putting away the groceries. The boy opened the box of animal crackers and spread them all over the table. 'What are you doing?' his mother asked. 'The box says not to eat them if the seal is broken' the boy explained. 'I'm looking for the seal.'