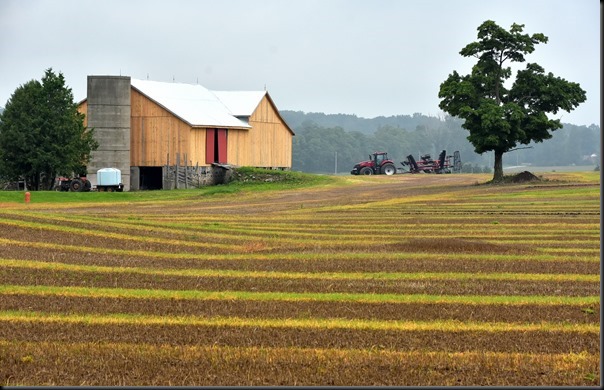 With the cloud base a couple hundred feet off the ground it was a hazy morning for awhile.  Kelly slipped over to Zurich and picked up some beans, pork chops, and cole slaw from the Bean Festival Saturday and she said it was a foggy drive.  Pheebs and I headed for the Hullett Marsh with only a bit of haze. 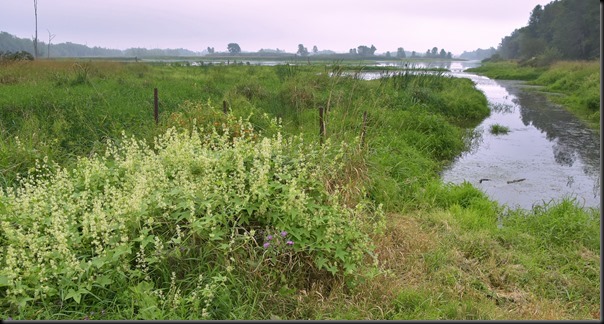 ONE OF OUR FAVORITE SPOTS TO STOP 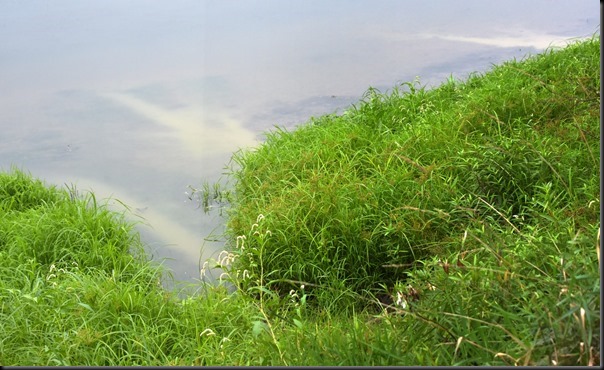 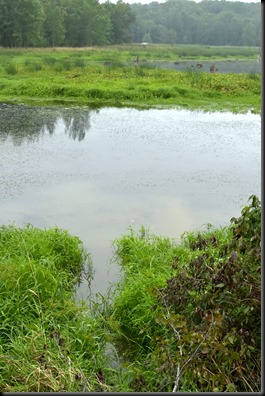 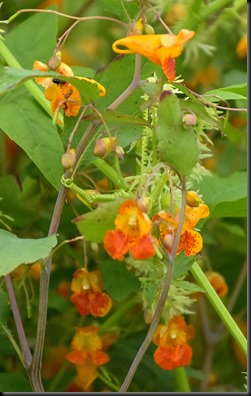 MUSKRAT PATHWAY THROUGH THE GRASS AND JEWEL WEED ON THE RIGHT 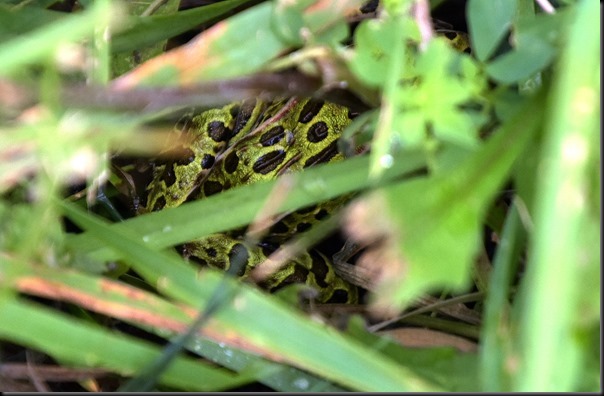 A LEOPARD FROG HIDES IN THE LONG GRASS 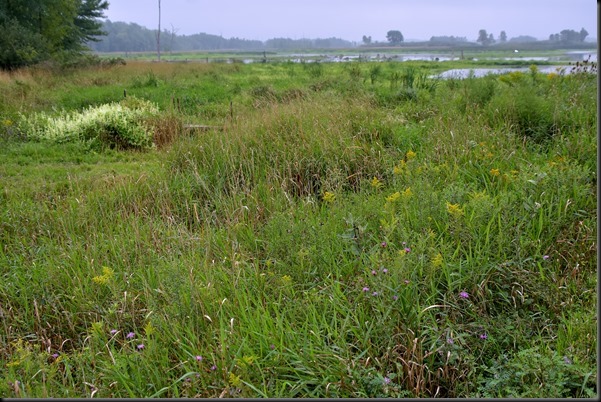 LOTS OF SMALL LEOPARD FROGS OUT THERE

We did manage a bug free walk at the Marsh but with heavy overnight dews now everything is wet in the mornings so we ended up with watery paws and feet.  All was quiet except for the Dinosaur like rasps of the Blue Herons.  Many summer song birds have already departed the area.  It is only the chorus of Crickets we mostly here now.  Being a Sunday morning we met very few vehicles on our short jaunt through the countryside. 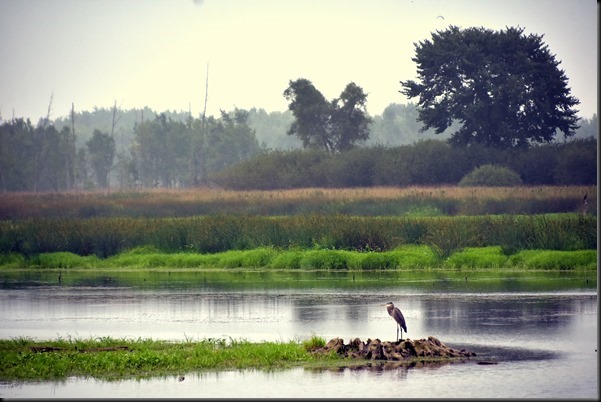 ONLY SAW 2 BLUE HERONS AND THIS WAS ONE OF THEM

AND THIS WAS THE SECOND ONE 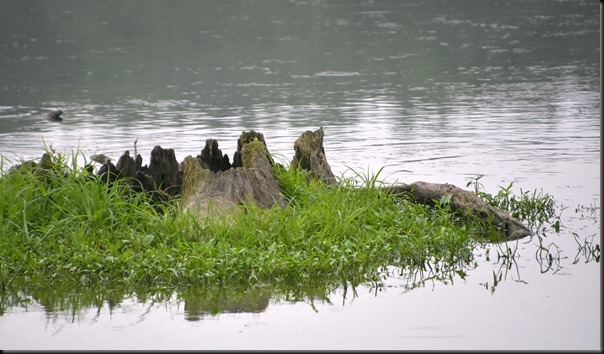 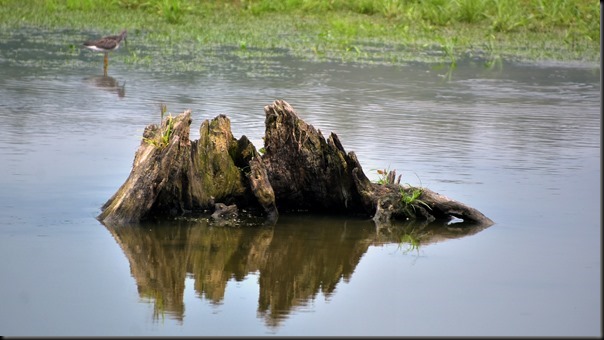 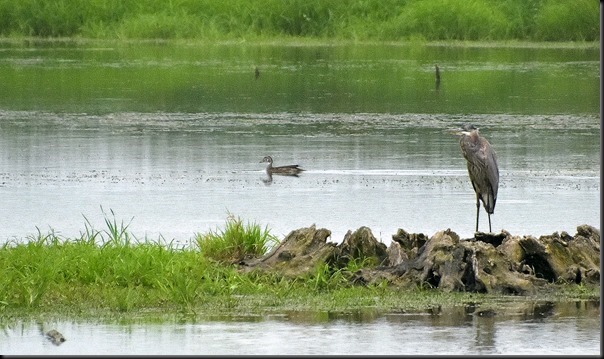 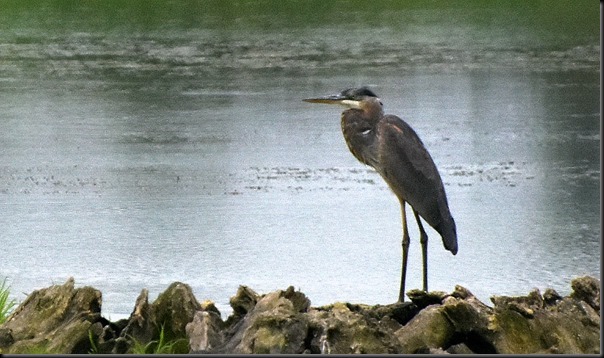 THE FIRST BLUE HERON TAKES TO THE AIR 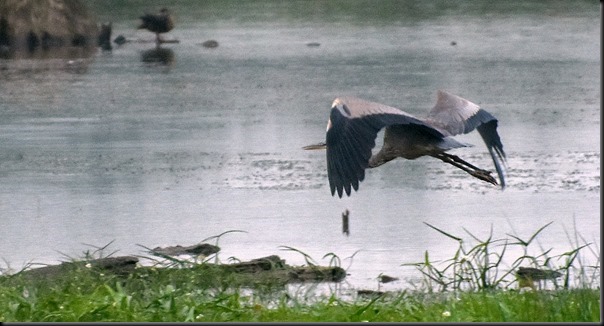 AND THE SECOND BLUE HERON TAKES TO THE AIR AS WELL

It is completely unimaginable to me now how people living in heavily populated urban centers can say they enjoy being there.  And yet I can remember living in Toronto (Spadina and St. Clair area) for 9 months back in 1967 and 68 thinking it was just tickety boo riding the buses, trolleys, and subway.  Lived in Kitchener Ontario about 4 years all told and Stratford for 20.  So yes I’ve done my city time so I know what I’m talking about.  Never would I voluntarily live in a big city again though.  I’ve been countryfied:)) 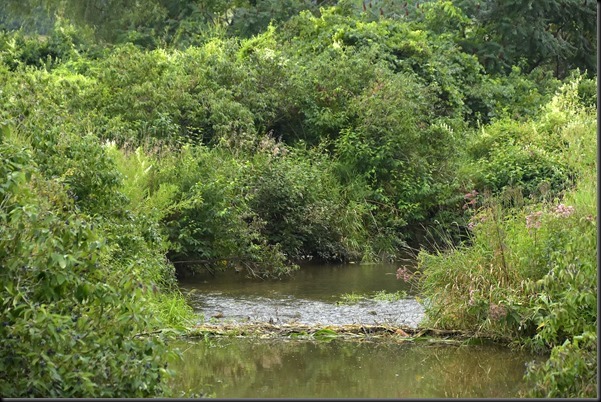 LOVE ALL THE LITTLE COUNTRY STREAMS MEANDERING THROUGH THE RURAL FARMLANDS

We puttered around in the Motorhome for awhile this afternoon arranging things but by 2 o’clock the rising humidity made doing anything outside prohibitive and that was the end of our puttering.  Looks like we have some miserably sticky weather coming up over the next three days. A heat advisory has already been issued for Monday.  #%*!!%^ 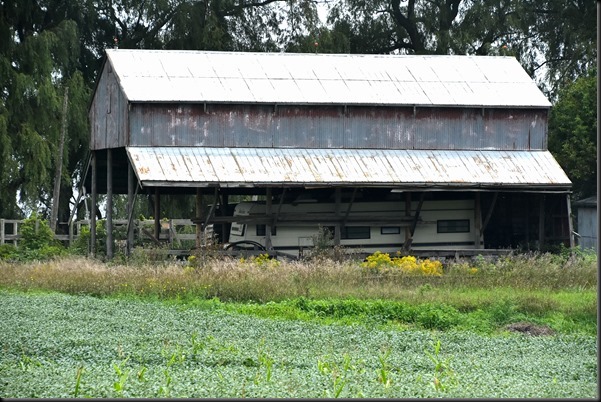 DON’T THINK THIS TRAVEL TRAILER’S BEEN ANYWHERE FOR AWHILE 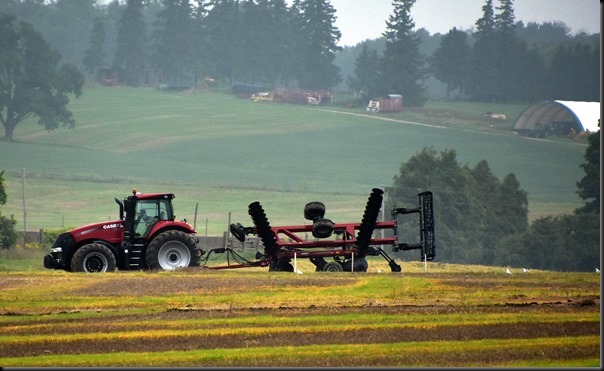 We had spaghetti and meat balls for supper and a thought occurred to me.  Don't ever ask me over to your house for spaghetti and meat balls and here's why.  Watching Kelly using a knife and fork to deftly eat her spaghetti I noticed she does it much nicer than I do.  She's got more table manners than I got.  I load my fork up with as much of that slippery stuff as I can then quickly haul the mass up to my mouth losing about half of it on the way.  Once into my mouth I am for a brief few seconds still connected to my plate.  There I sit partially hunched over with what seems like about 352 tomato pasted noodles wiggling out of my mouth and it's not until I can bite them off freeing up the connection to my plate that I can lift my head and return to some sense of visible decency.  Well that’s after I’ve wiped tomato sauce out of my moustache and beard that is.  A few seconds later I repeat the same process and by the way I would never order spaghetti and meat balls in a public restaurant. GROANER’S CORNER:(( A Chinese Doctor can't find a job in a Hospital in the US, so he opens his own clinic and puts a sign outside.  'GET TREATMENT FOR $20 - IF NOT CURED GET BACK $100.'An American lawyer thinks this is a great opportunity to earn $100 and goes to the clinic.Lawyer: 'I have lost my sense of taste.  'Chinese: 'Nurse, bring medicine from box No. 22 and put 3 drops in patient's mouth.  'Lawyer: 'Ugh. this is kerosene.  'Chinese: 'Congrats, your sense of taste is restored.  Give me $20.'The annoyed lawyer goes back after a few days to recover his money.Lawyer:  'I have lost my memory. I cannot remember anything.'  Chinese: 'Nurse, bring medicine from box no. 22 and put 3 drops in his mouth.'Lawyer (annoyed): 'This is kerosene. You gave this to me last time for restoring my taste.  'Chinese: 'Congrats. You got your memory back. Give me $20.  'The fuming lawyer pays him, and then comes back a week later determined to get back $100.  Lawyer: 'My eyesight has become very weak I can't see at all.  'Chinese: 'Well, I don't have any medicine for that, so take this $100.  'Lawyer (staring at the note): 'But this is $20, not $100!!'  Chinese: 'Congrats, your eyesight is restored. Give me $20'.

A woman invited some people to dinner. At the table, she turned to her six-year-old daughter and said, "Would you like to say the blessing?" "I don’t know what to say," the girl replied. "Just say what you hear Mommy say," the woman answered. The daughter bowed her head and said, "Lord, why on earth did I invite all these people to dinner?"