NOT A GOOD DAY AS MY BODY DID NOT TREAT ME WELL:(( 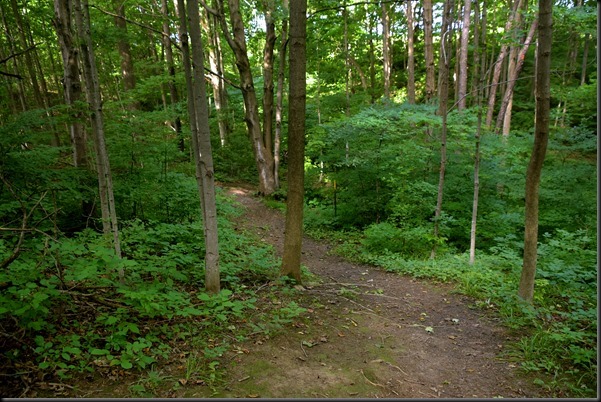 Woke up feeling much better than I did before going to bed.  Amazing how the human body can sometimes re-set itself both mentally and physically with a good night's sleep.  In fact my body batteries must have been plugged into overdrive overnight almost overwhelming me with energy this morning.   However……it wasn’t to last:(( 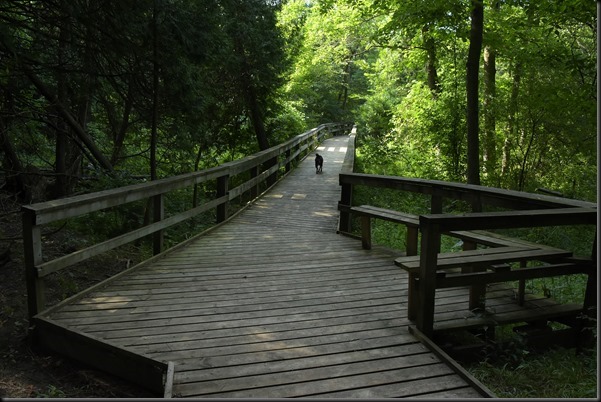 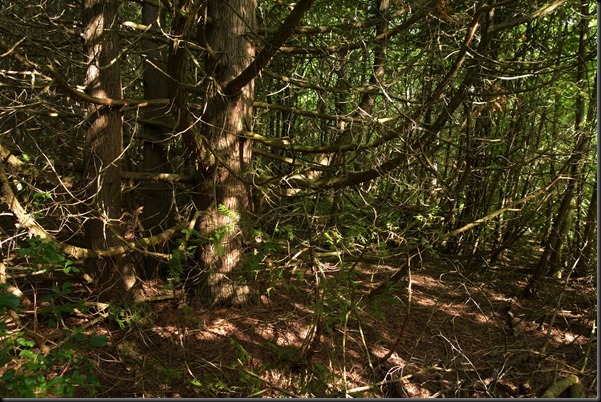 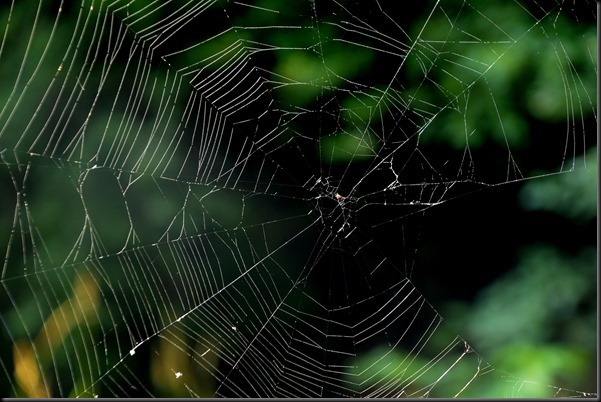 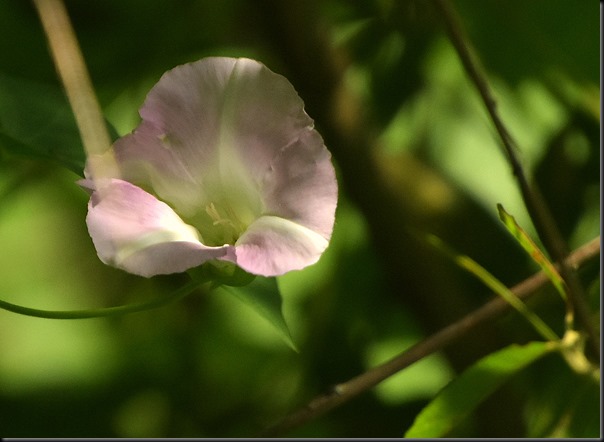 MUST HAVE BEEN SOME RELIGIOUS FOLKS PASS THIS WAY

Looked like a nice sunrise through the pine trees so Pheebs and I were off out the door hoping to take advantage of the mornings temperatures in the lower 60's.  Made or way straight away to the Bannockburn Conservation Area about 10 minutes from our house. Nobody there and it was an exceptional beautiful morning as we struck off into the forest clipping right along because I felt so good.  However, I had no idea what my body was about to do to me. 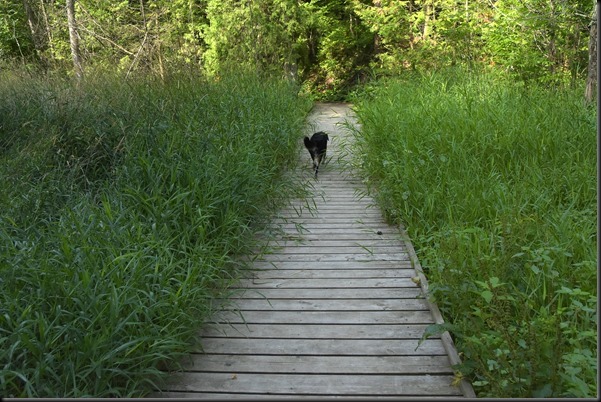 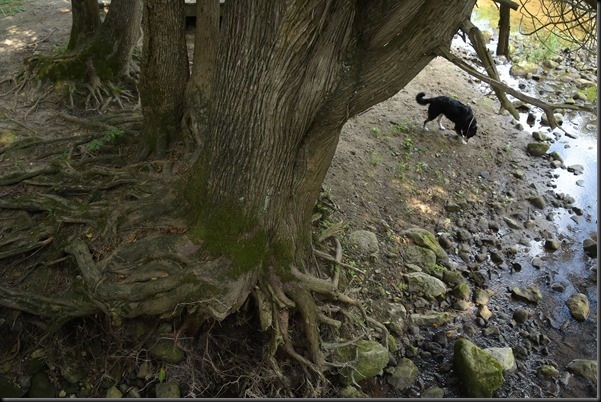 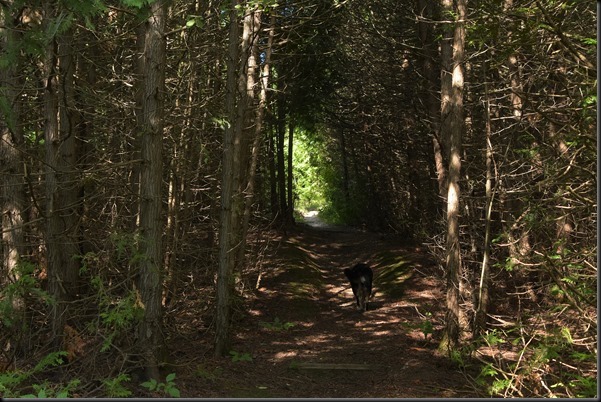 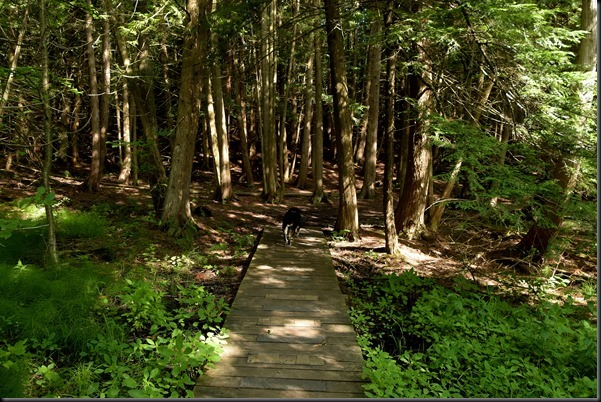 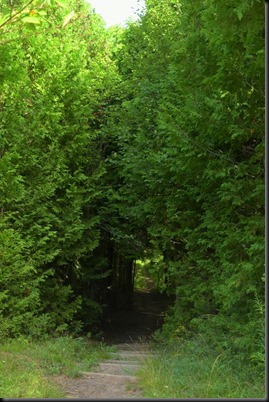 We were about half way round a loop trail when I was suddenly aware I needed to get to a washroom 'fast.'  There was a washroom at the trailhead but it was 7 or 8 minutes way.  I had about 10 seconds to get there.  With muscles cinched up tighter than a snare drum and moving like the wind I made it......almost.  Well I mostly made it and we'll leave it at that.  Later on my day got worse. 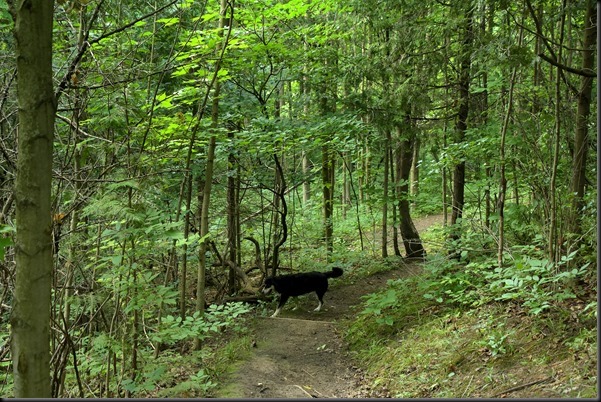 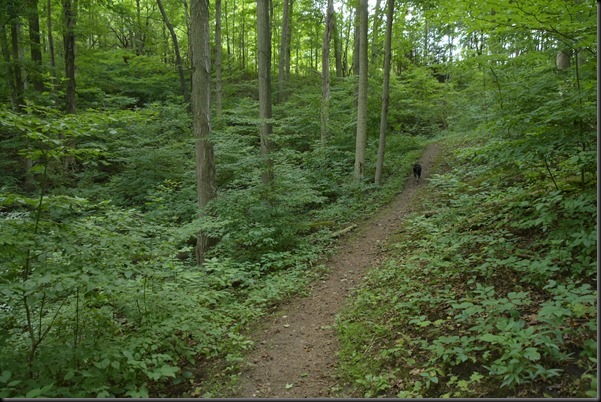 Home 10 minutes later from Bannockburn a change of clothes was in order.  But I still felt reasonably Okay so right away got busy with a few things on the Motorhome.  With a spray can of 'heat paint' I painted the rig's two new bare galvanized tail  pipes.  It was quite a struggle worming my way around under the coach with the spray can.  Luckily nobody walked by and called 911 reporting a 'Senior thrashing about on the ground like a trained Seal at the 5 Seasons Park.' 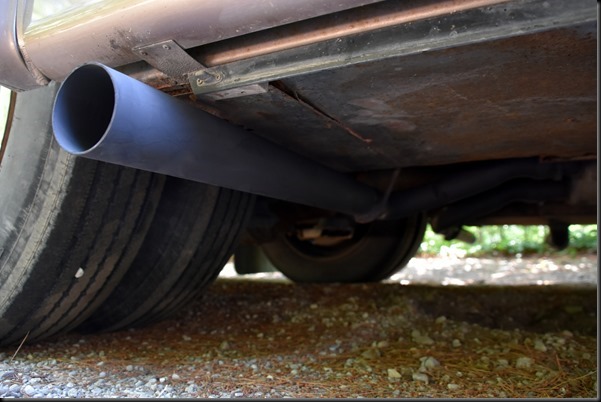 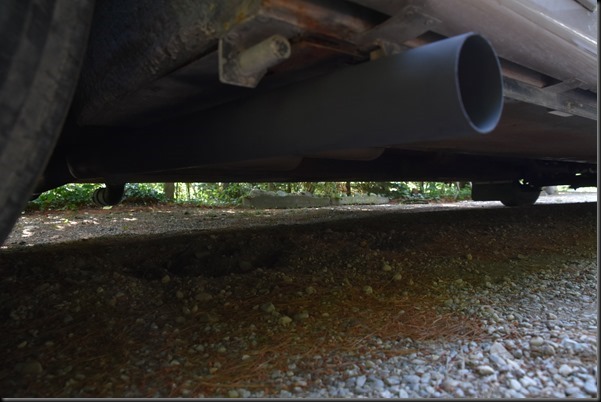 Still feeling not too bad I headed for the Motorhome roof and attempted to clean the roof vents.  That didn't really go so swell so I came down again.  Noticed another ladder mount on the back of the rig is broke.  Feeling grumpy about that I packed it in and headed inside and started to write tonight's post and edit the photos.  I was still doing fine with the exception of a few more rush jobs to the washroom.  Kelly had been out taking care of a few errands in town and was home by one.  Minutes after she came in the house I felt a wave of nausea and began shaking.  No, not because Kelly came in the house!!  It's an uncontrollable shaking and it's happened to me before several times.  Headed for my recliner and nearly shook it apart.  It was a warm day but I felt cold.  Got out of my chair long enough to put on a lined winter jacket and Kelly threw a blanket over me.  I just kept shaking and shaking and could not stop.  Body was aching, especially my legs. 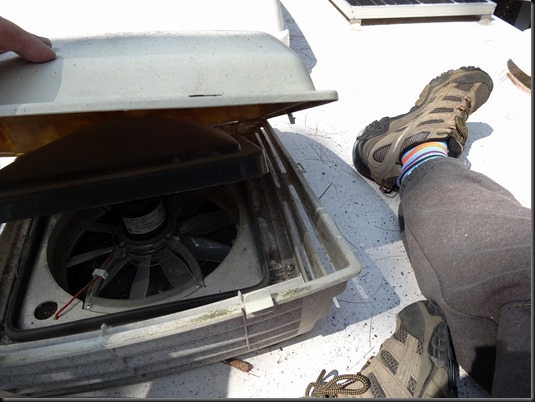 ON THE ROOF OF THE RIG

At some point I fell asleep for maybe 20 minutes and my shaking temporarily stopped.  Now I was burning up and my very reddened face felt like I had stuck it in a fireplace.  The shaking started again and continued for maybe another 15 minutes then stopped.  The heat in my face dissipated leaving me with a grinding headache.  Half an hour later I felt a wee bit better again with the exception of my aching legs and an overall tiredness. 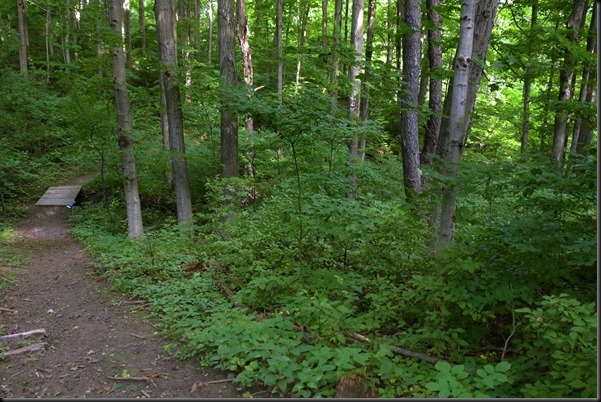 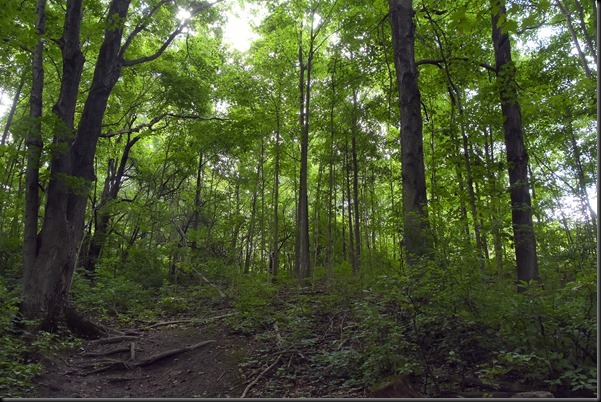 I WAS DOING ABOUT 40 MPH GOING UP THIS HILL 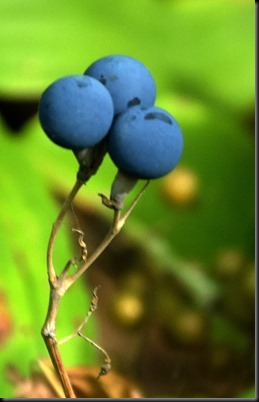 Last time I remember this happening to me was 3 years ago at Kelly's Mothers house in Spencerport New York.  We were in the Motorhome when I was suddenly overcome with uncontrollable shaking for nearly half an hour.  We left for Sarasota Florida early the next morning and I was so sick all the way there that I have no idea how we made it.  I never totally got over that for the next two to three weeks when we finally made it to Congress Arizona. 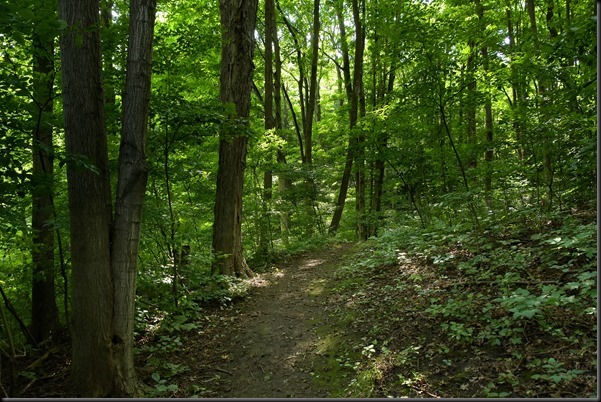 I STOPPED HERE THINKING MAYBE I SHOULD DUCK OFF THE TRAIL……NO, RUN AL RUN 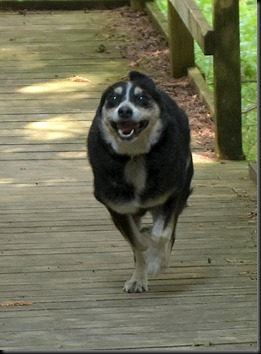 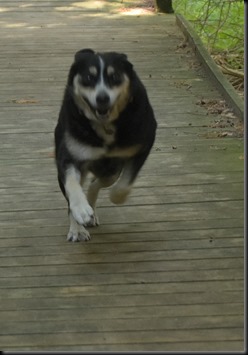 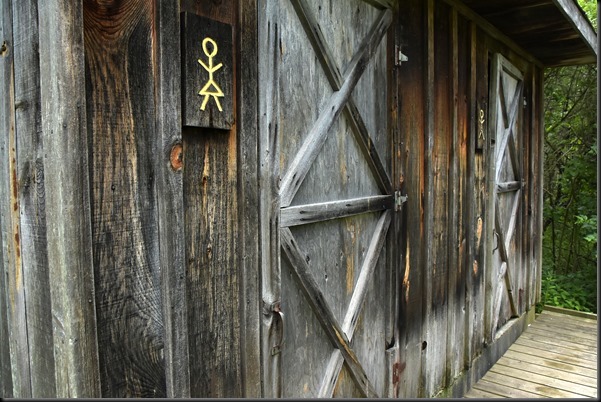 Kelly, Rebecca, little Ella and Ricardo all headed out for supper around 6 but with no appetite for any kind of food I stayed in my recliner and concentrated on finishing tonight's post and somewhere along the line I fell asleep again.  Took a Tylenol and another one of my Arthrotec arthritis pills which helped with my headache and sore legs.   I have no idea what occasionally brings this on.  We'll see how I feel in the morning…………………… 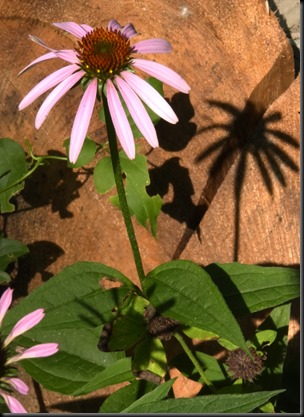 GROANER'S CORNER:((  It was Mike and Patrick giving the motorcycle a ride on a brisk autumn day. After  a wee bit, Mike who was sitt'n behind Patrick on the bike began to holler, "Patrick... the wind is cutt'n me chest out!"  “Well, Mike my lad," said Patrick, "why don't you take your jacket off and turn it from front to back, that'll block the wind for you. "So Mike took Patrick's advice and turned his jacket from front to back and got back on the bike and the two of them were off down the road again. After a bit, Patrick turned to talk to Mike and was horrified to see that he was not there. Patrick immediately turned the bike around and retraced their route. When after a short time he came to a turn and saw a bunch of farmers standing around Mike who was sitting on the ground. "Thanks be to heaven, is he alright?" Patrick hailed to the farmers.  "Well," said one of the farmers, "he was alright when we found him here, but since we turned his head back to front... he hasn't said a word since!"