PLANTING MORE DAFFYS AND TULIES, THE MOTORHOME WAXING CONTINUES AND YES WE GOT NO BANANAS 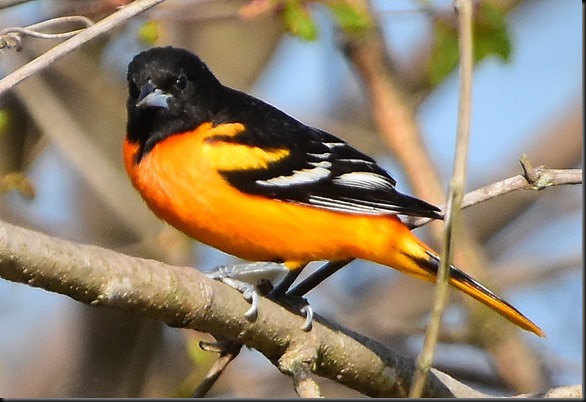 BALTIMORE ORIOLE SEEN ALONG THE SHORES OF LAKE HURON THIS MORNING

So hard to keep track of days and especially week days.  When one is finally out of the work force days just kind of blend into each other.  No place to be at any particular time, no work routines and no schedules.  For all I knew today was Saturday.  I don't know when it finally dawned on me it was Friday.  There was a time in the work years when week-ends were always very much looked forward to.  Now it just doesn't matter.  Week-ends are the same as week days.  Nothing special going on and if Tuesday comes after Friday and Sunday is the day before Wednesday, well so be it and that's alright too. 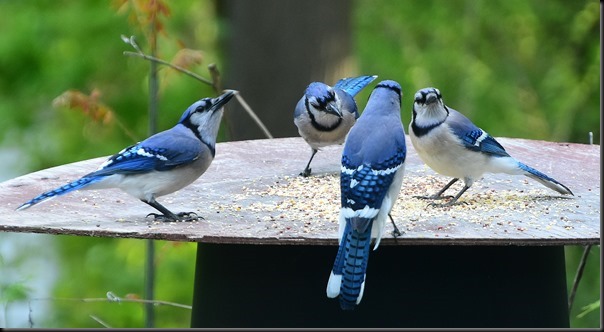 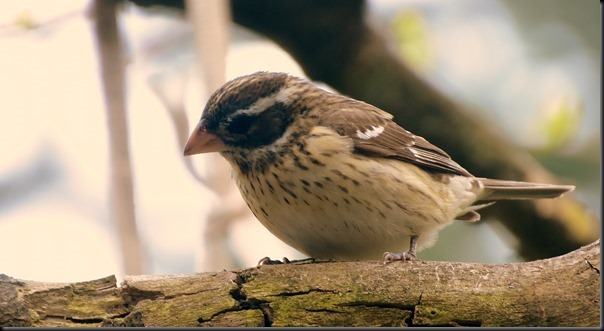 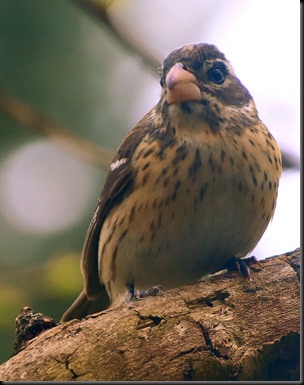 A McDonalds coffee to go with a matching breakfast burrito seemed the right thing to do so Pheebs and I scooped our goodies and headed down to the harbor.  No vehicles parked at the doggy walking area so away we went along the parallel trail overlooking Lake Huron. 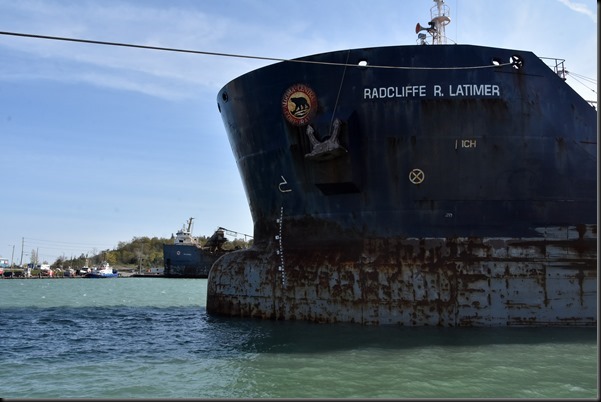 THE RADCLIFFE R. LATIMER WAS DOCKED AT THE GODERICH ELEVATORS 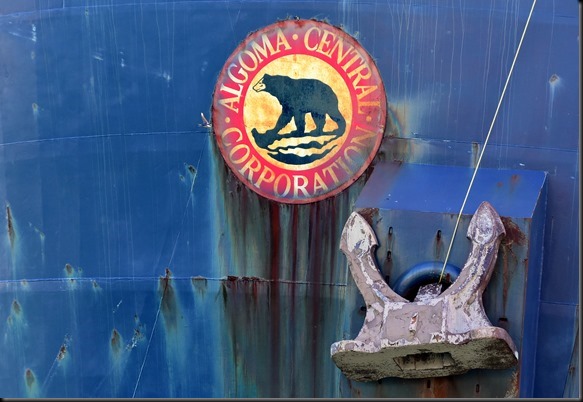 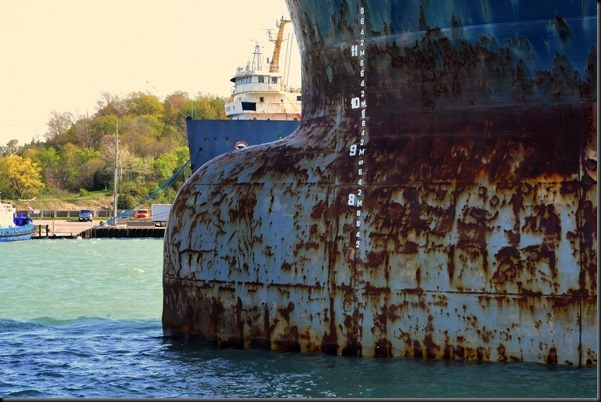 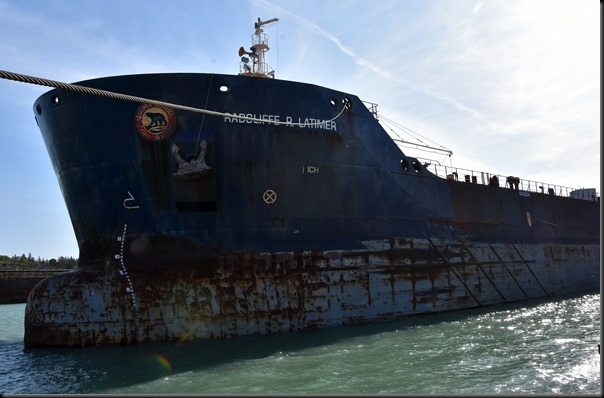 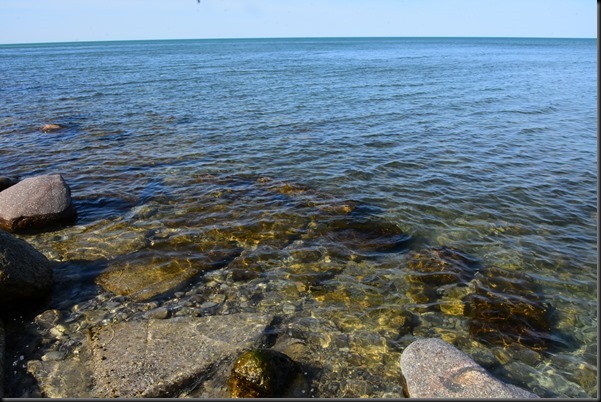 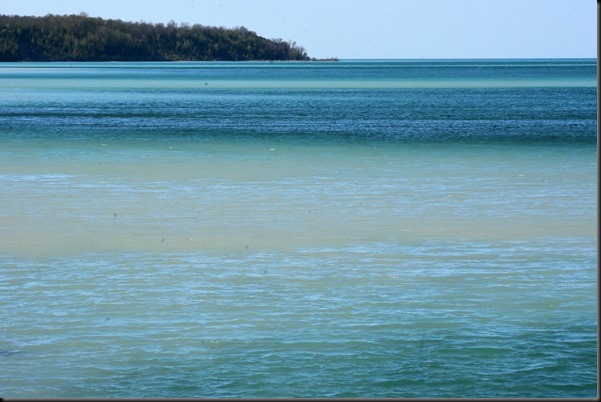 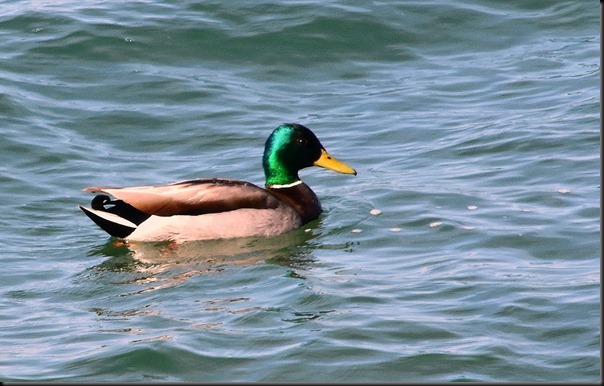 A stop at Walmart fetched us 3 pots of daffodils and 2 pots of tulips.  It's the end of the season for them so they were on sale very cheap.  I planted them in our front flower bed and they will hopefully be looking good next Spring. 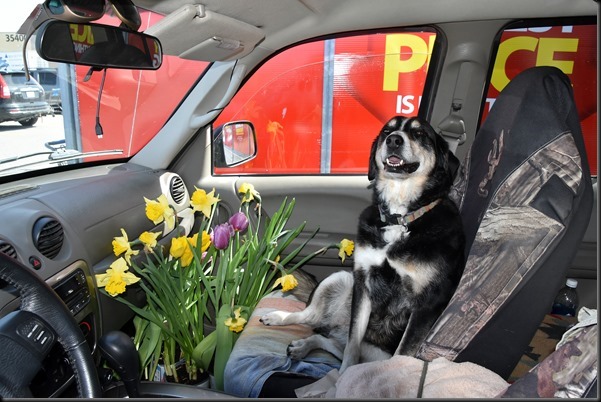 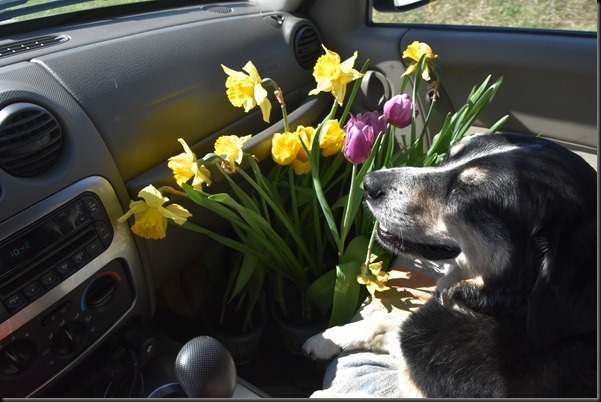 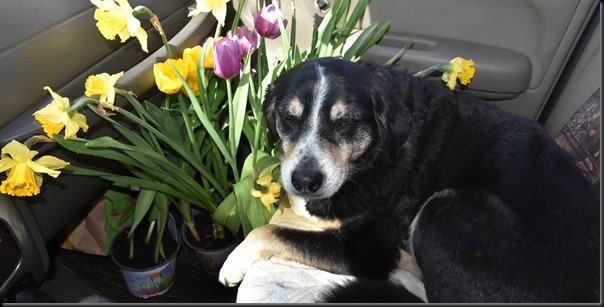 Pheebs and I were home about 11 and I started right away on the Motorhome again.  I now have all the passenger side bins waxed.  Next will be the top two thirds of the coach on that side then I will back the Motorhome out, turn it around, and back it in whereupon I will begin on the driver's side.  I am so glad I noticed a week ago or so that the Canadian Tire Store in Goderich had 10 inch Simonize electric buffers on sale and that has made a world of difference.  So much easier doing all that buffing with a buffer machine rather than by hand.   It's the first time I've ever used a buffer and it has me wondering why I didn't get one of those things years ago'. 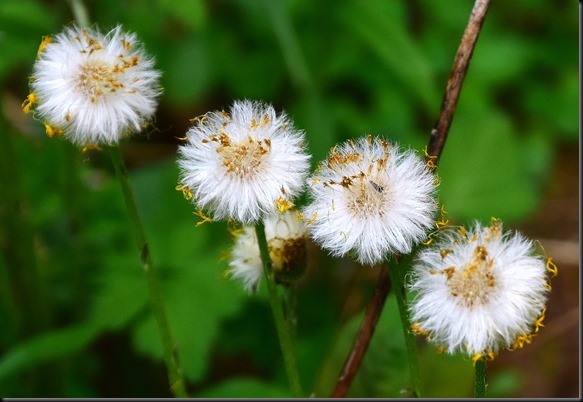 Some may be wondering if I'm spending all this time shining up the Motorhome to sell it.  Nope, just had me an urge to clean and wax it earlier in the week so that's what I'm doing.  Maybe when I get it done we'll head out for an overnighter somewhere.  Just the Motorhome and not the Jeep.  It would be nice to sit outside at night under the stars again.  Just gotta find some quiet unpopulated places to do that...................... 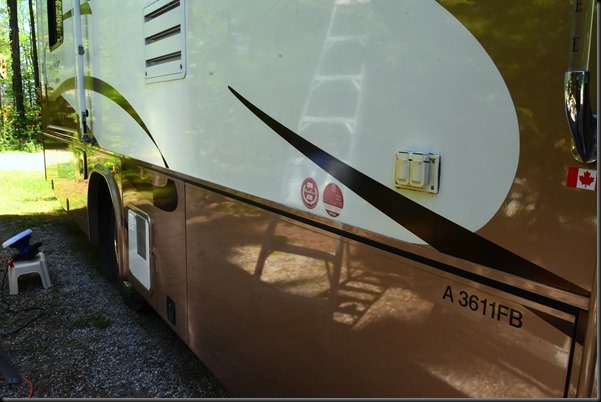 Sometimes we don’t communicate so swell here at home or is it my memory that just don’t work so good no more.  I had forgot Kelly said she had some errands to run in Goderich this morning and that usually means a stop at the grocery store.  Of course while in Walmart picking up the 5 pots of tulips and daffodils I decided i had better pick us up a bunch of bananas too.  Of course when Kelly got home later she also had picked up a bunch of bananas plus daffodils and tulips.  I have the 7 pots of flowers planted now but in order to eat all the bananas we have we are going to have to get ourselves a whole herd of Monkeys!! 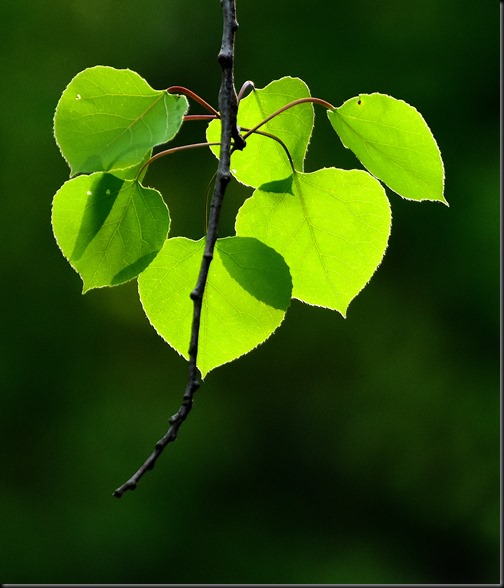 GROANER'S CORNER:((  The US standard railroad gauge (space between the rails) is 4 feet 8½ inches.  That is a very odd number. Why was that gauge used?  Because that's the way they built them in England and the US railroads were built by English expatriates.  Why did the English build them that way? Because the first rail lines were built by the same people who built the pre-railroad tramways, and that's the gauge they used.  Why did they use that gauge? Because the people who built the tramways used the same jigs and tools that were used for building wagons, which used that wheel spacing.  So why did the wagons have that particular spacing? If they tried to use any other spacing, the wagon wheels would break on some of the old, long distance roads in England because that was the spacing of the wheel ruts.  So who built those old rutted roads? The first long distance roads in Europe (including England) were built by Imperial Rome for their legions and they have been in use ever since.  And the ruts in the roads? The ruts, which everyone had to match for fear of breaking their wagon wheels, were first formed by chariots. Since the chariots were made for (or by) Imperial Rome, they were all alike in the manner of wheel spacing.  The US standard railroad gauge of 4 feet 8½ inches was derived from the original specifications for the Imperial Roman war chariot.  Specifications and bureaucracies live on forever!  So, the next time you are handed a specification and you wonder what bureaucratic horse's ass came up with it, you may be exactly right, because the Imperial Roman war chariots were made just wide enough to accommodate the rear ends of two horses.  There we have the answer to the original question but now for a new twist to the story.  When we see the space shuttle sitting on its launching pad, there are two booster rockets attached to the side of the main fuel tank. These are solid fuel boosters that are made by Thiokol at their plant in Utah.  The engineers who designed the boosters would have preferred to make them larger in diameter but they had to be shipped by rail from the factory to the launch site. The railroad from the factory had to pass through several tunnels in the mountains that are, you guessed it, just slightly wider than the railroad track which is about two horse butts wide.  Incredibly, a major design feature of what is currently the world's most advanced and technologically sophisticated transportation system was determined over two thousand years ago by the width of a horse's ass.  Don't you just love engineering?