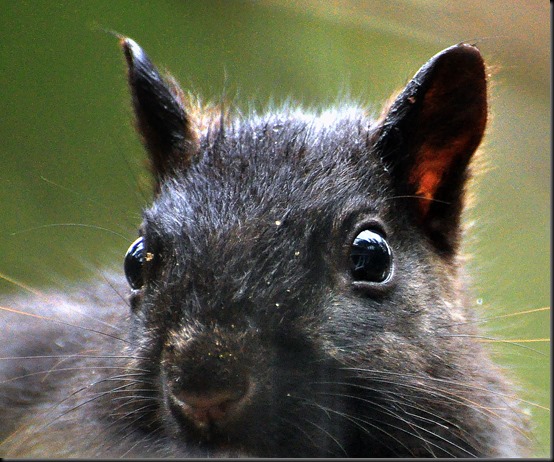 Had myself  bit of a close call this morning when I took a tumble and horizontally landed part of myself in the icy cold waters of Lake Huron.

Pheebs and I had driven up to Goderich and parked down along the shoreline at the doggy walking area.  Pheebs was out of the Jeep checking out all the smells when I noticed some long icicles hanging from some shrubs along the water’s edge.  Between myself and those icicles was a couple steps down a sandy grass bank and maybe a 50 foot scramble over a bunch of wet rocks.  Had my new greatly griptionated hiking shoes on so I knew the wet rocks would not be a problem.  And they wouldn’t have been if the rocks would have been simply just wet.  So here’s where my usually logical brain let me down again.  It failed to compute and link three warning signs facing me.  First, the temperature was somewhere around the freezing mark and with an icy breeze off the lake it was probably below the freezing mark.  Small waves were gently breaking over the rocks and a short distance away were some groups of icicles.  Have you figured out the hazard yet??  Obviously my brain didn’t and if it did it sure as heck didn’t warn me!! 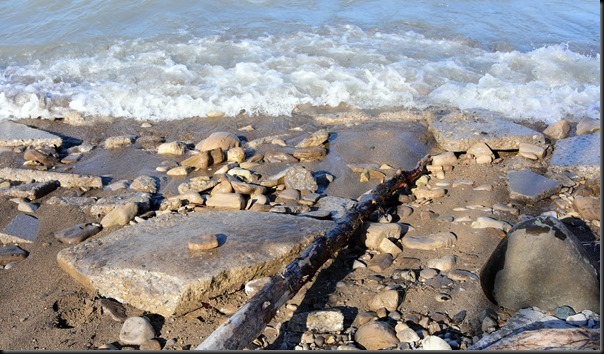 IT WAS THAT LARGE  SLIGHTLY SLANTED PIECE OF CONCRETE i STEPPED UP ONTO THEN CRASHED DOWN ON THE OTHER SIDE OF IT ONTO THOSE ROCKS JUST AHEAD OF WHERE THE WAVE IS COMING IN………HAVE YOU FIGURED OUT THE HIDDEN DANGER YET??

I didn’t get anywhere near those icicles because I was flat on my back before I even barely got started.  With my Nikon D7200 and 16-300mm lens attached and firmly gripped in my left hand I carefully made my way down the short bank, assessed the wet rocks ahead of me and stepped up on a sloping flat piece of concrete.  That piece of concrete wasn’t just wet it was coated in a thin invisible layer of ‘ICE’!!!!  ‘A-HA’  I had about half a second before impacting the rocks to twist my left hand up in a desparate attempt to save my camera.  I heard it hit the rocks and there I was partially in the cold water flat on my back staring at the sky.  To add insult to injury I heard the next wave coming and felt it coldly slosh up along my whole right side.  I immediately thought of my Samsung Smart Phone in it’s case attached to my belt on the lake side of me and figured it was done for.  I was still holding my camera tightly in my raised left hand and noticed it appeared to be dry.  Gotta get up and get oughta here before the next wave rolls in and with that thought in mind I quickly struggled my soggy self to my feet and began clambering back up the small embankment.  And I was hurting.  Pheebs, who had been exploring along the bank’s top hadn’t seen the mishap so I called her over and quickly put her in the Jeep.  It was then I noticed something was missing…..my hat!! 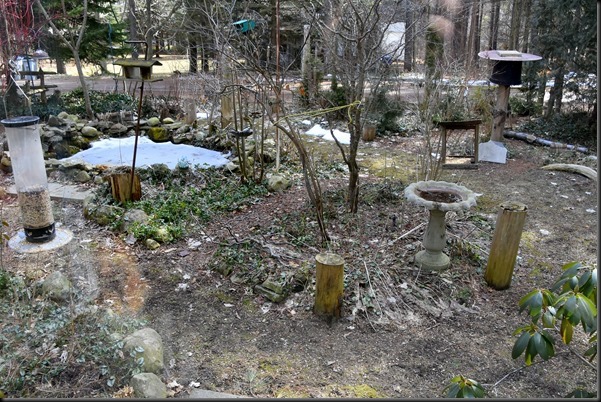 SLOWLY BUT SURELY THE SNOW IS GRADUALLY GOING AWAY….FOUR YEARS AGO TODAY IT WAS A RECORD BREAKING 76F HERE IN BAYFIELD 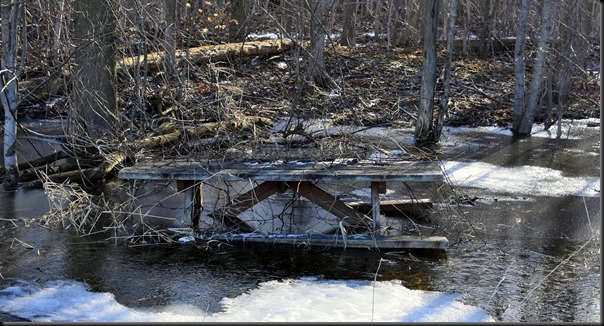 JUST IN CASE YOUR BACK YARD PICNIC TABLE IS MISSING….THIS MIGHT BE IT

I didn’t particularly want to go back down among those icy rocks again but I had no choice if I wanted to retrieve my new hat which I had just bought last week.  And, a few parts of my body were letting me know in no uncertain terms that this 73 year old guy had just came down hard on a jumble of icy rocks.  Looking over towards the spot I had fallen I did not see my hat and thought ‘oh-no’ the waves have already carried it out.  Quickly scanned the water but no sign of my hat.  The little finger on my left hand was throbbing now and I could feel I must have impacted a rock with my right knee.  I just wanted to get in the warm Jeep and sit down.  No matter, I had to find my hat so leaving my camera in the Jeep I carefully made my way the short distance  back down to where I had crashed and saw my hat lying upside down on the rocks.  Luckily it  had fallen off my head on the side away from the water.    Being extra careful where to step and with hat firmly in hand I made my way back to the Jeep.  I was now very aware of how wet and cold the back half of my body was.  My little finger felt like it had been slammed in a car door and I suddenly realized my Smart Phone was not on my belt!! 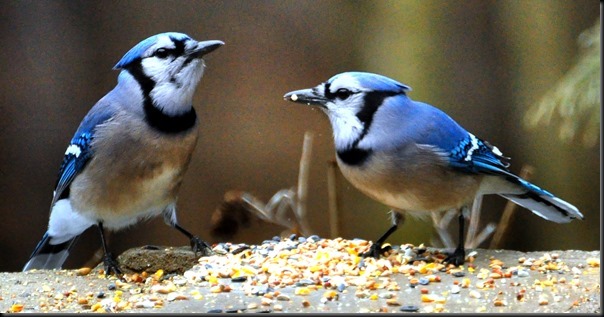 ‘SAY D’YA SUPPOSE THAT TUMBLE HE TOOK THIS MORNING MIGHT HAVE KNOCKED SOME SENSE INTO HIM’??    ‘NAWWWW, I DON’T THINK SO’

When I had reached for my Smart Phone it wasn’t the familiar feel of it’s case I felt.  Instead it was the feel of my Sony point and shoot camera case.  I instantly remembered it was the camera I had put on my belt this morning and not the Smart Phone.  I quickly pulled the camera out of it’s case expecting it to be sopping wet.  It was as dry as could be despite being on the water side of the lake for about half a dozen seconds.  Okay, where’s my Smart Phone then….oh ya, I had put it in my right hand shirt pocket earlier and sure enough it was still there, and dry too.  Remembering the striking sound my camera had made when I fell I next very worriedly turned my attention to my D7200 Nikon. 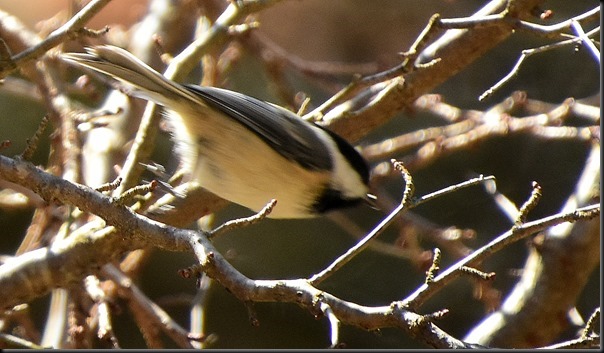 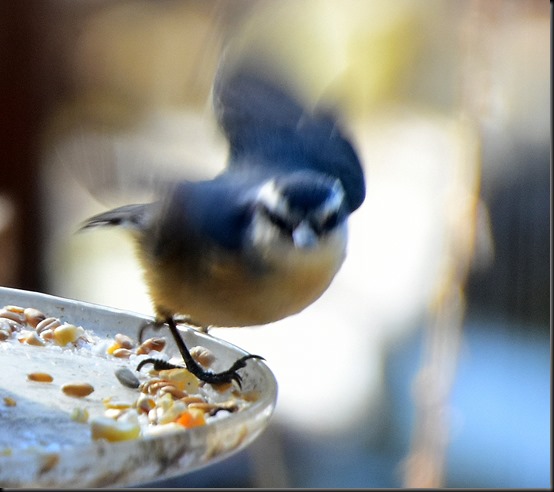 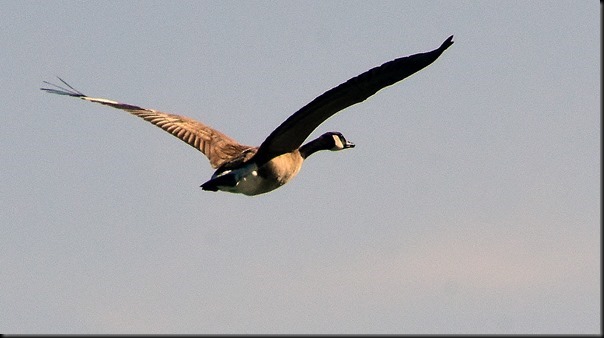 As I said, the camera was dry and had not gone into the water.  There were no visible marks, bashes, dents, bangs, or scrapes on it and the lens glass was intact and not cracked or broken.  I turned the camera off and then on again.  Everything sounded normal so I took a few photos out the window.  Auto focus worked fine, tried a few settings, auto flash worked, etc.  I knew the true test would be when I got home and had a look at the few photos I had just taken. 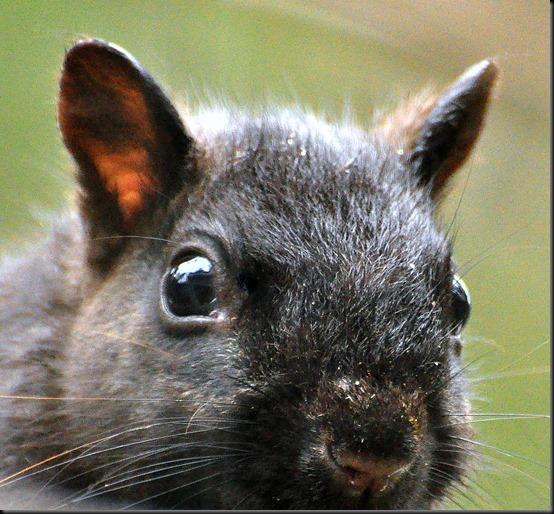 Thinking about all this later I came to the conclusion it was the little finger of my left hand which cushioned the camera when it struck the ground and the sound I heard was the camera’s lens hood striking a glancing blow against a rock.  All in all I was very lucky in not damaging anything and aside from a still swollen little finger, a couple tweaks in my back, and a sizable chunk of skin off my right knee I came away from my foolish tumble in relatively good shape.  Mad at my brain though for being so careless and not warning me of the icy hazard right in front of me. 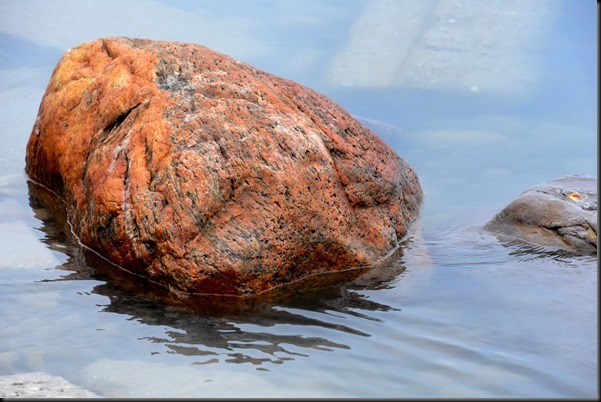 With my overly damp wallet lying open on the dash vent  sucking in hot air Pheebs and I cut our morning drive short and headed for home.  It was time to get out of my cold wet clothes and into some warm and dry cozy feeling stuff.  I was surprised at the amount of sand in my clothes so it was into the wash machine with everything……….and that kind of wraps up another way.

In conclusion….My photos downloaded fine and I could not see any problem with them or my camera.  My back tweaks are gone and the tip of my little finger on my left hand has turned purple……Oh, and there is a positive side to my silly mishap this morning.  At least it gave me something different to write tonight for a change.  ‘Yaaaay Team’:)) 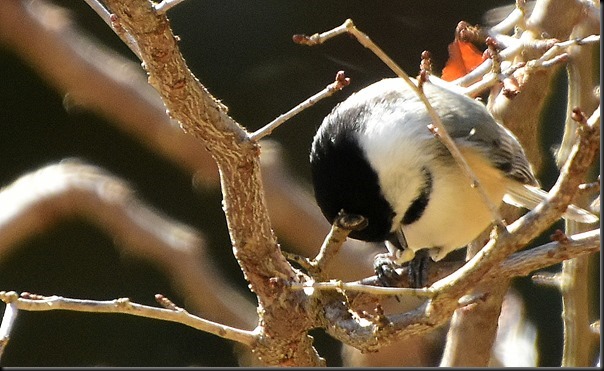 A new aid to rapid--almost magical--learning has made its appearance. Indications are that if it catches on all the electronic gadgets will be so much junk.  The new device is known as Built-in Orderly Organized Knowledge. The makers generally call it by its initials, BOOK.
Many advantages are claimed over the old-style learning and teaching aids on which most people are brought up nowadays. It has no wires, no electric circuit to break down. No connection is needed to an electricity power point. It is made entirely without mechanical parts to go wrong or need replacement.  Anyone can use BOOK, even children, and it fits comfortably into the hands. It can be conveniently used sitting in an armchair by the fire.
So how does this revolutionary, unbelievably easy invention work? Basically BOOK consists only of a large number of paper sheets. These may run to hundreds where BOOK covers a lengthy programs of information. Each sheet bears a number in sequence, so that the sheets cannot be used in the wrong order.  To make it even easier for the user to keep the sheets in the proper order they are held firmly in place by a special locking device called a "binding".  Each sheet of paper presents the user with an information sequence in the form of symbols, which he absorbs optically for automatic registration on the brain. When one sheet has been assimilated a flick of the finger turns it over and further information is found on the other side.  By using both sides of each sheet in this way a great economy is effected, thus reducing both the size and cost of BOOK. No buttons need to be pressed to move from one sheet to another, to open or close BOOK, or to start it working.  BOOK may be taken up at any time and used by merely opening it. Instantly it is ready for use. Nothing has to be connected up or switched on. The user may turn at will to any sheet, going backwards or forwards as he pleases. A sheet is provided near the beginning as a location finder for any required information sequence.  A small accessory, available at trifling extra cost, is the BOOK-mark. This enables the user to pick up his program where he left off on the previous learning session. BOOK-mark is versatile and may be used in any BOOK.  The initial cost varies with the size and subject matter. Already a vast range of BOOKs are available, covering every conceivable subject and adjusted to different levels of aptitude. One BOOK, small enough to be held in the hands, may contain an entire learning schedule.  Once purchased, BOOK requires no further upkeep cost; no batteries or wires are needed, since the motive power, thanks to an ingenious device patented by the makers, is supplied by the brain of the user.  BOOKs may be stored on handy shelves and for ease of reference the program schedule is normally indicated on the back of the binding.  Altogether the Built-in Orderly Organized Knowledge seems to have great advantages with no drawbacks. We predict a big future for it.