UP PAST MIDNIGHT SLOWED ME DOWN TODAY 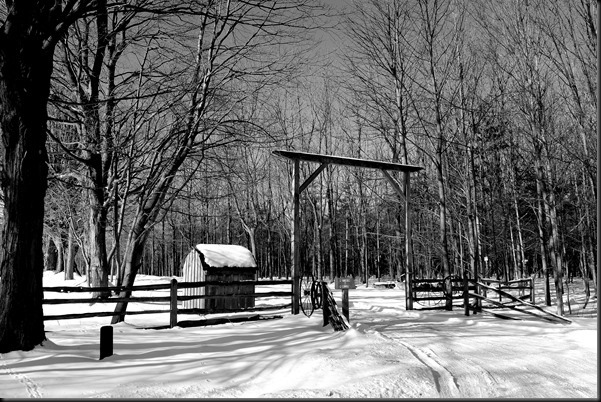 Can’t remember when the last time it was I stayed up past midnight but it was after midnight Saturday and there I was still watching television.  What!!!!  One of my favorite channels is AXS TV and it was there last night I watched a 2 hour program about Jim Morrison and ‘The Doors’ featuring remaining band members Ray Manzarek, John Densmore, and Robby Krieger.  Just one of my favorite musical rock groups from the late 60’s.  The late 60’s and all of the 70’s were a very turbulent time in my life and the music from that era has imbedded itself in me.  With a life long keen interest in music I’m always interested in what goes on behind the scenes with the musicians.  Who wrote the music as well as where, when, and how was it written.  Why was it written.  I find it interesting to see how music came together for musicians like The Doors and how they came up with the guitar riffs, keyboard, and drum spots .  Fascinating to watch as they start with sometimes nothing then working together slowly develop their next haunting piece of music.   I think all musical groups are like this and it’s interesting to watch how things come about behind the scenes.  AXS TV has a lot of documentaries along these lines plus concerts and interviews.  I especially like Dan Rather’s interviews with many of the musicians back in those heady days of the 60’s, 70’s, and 80’s.  Always interesting for me.  Although I can’t play a single note on any instrument I’ve always been very much into music for as long as I can remember.  I’ve said many times if I had to name one single thing in my life that has brought more consistent enjoyment than anything else over these seven plus decades that one thing is music.  I surround myself with it every waking day.  And here you thought I was gonna say peanut butter and honey sandwiches……….. 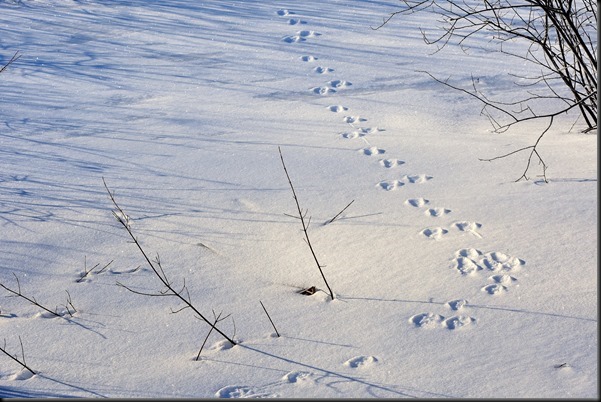 SPOTTED THIS FLOCK OF WILD TURKEYS THIS MORNING 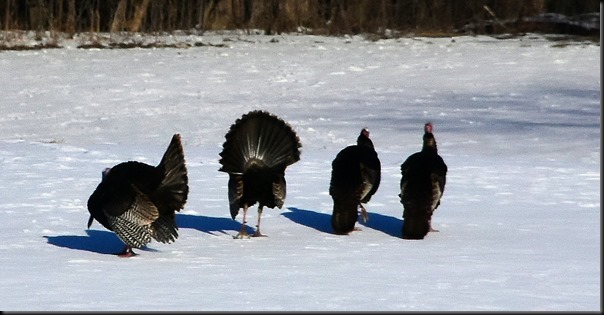 AND A COUPLE SAND HILL CRANES 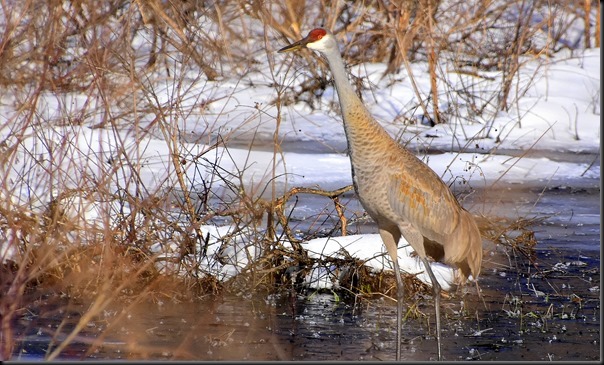 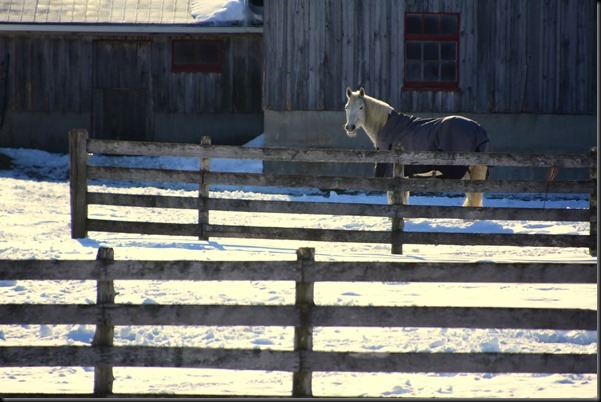 SOAKING UP SOME SUNDAY SUNSHINE ON A CRISP WINTER’S MORN 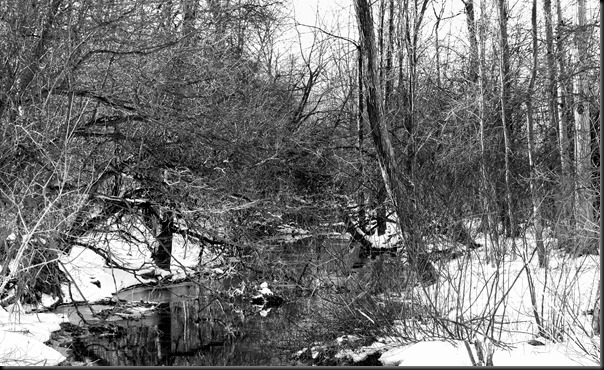 Another sunrise meant another nice day so Pheebs and I were off again this time wandering around between Goderich and Clinton up as far as Auburn.  It was Sunday morning so it was very few vehicles we encountered while out and about.  Big change from a week ago when we started off the day in the dark lost in Louisville Kentucky then fought our way through Cincinnati, Toledo, and that horrid traffic nightmare in the North suburbs of Detroit on I-94. 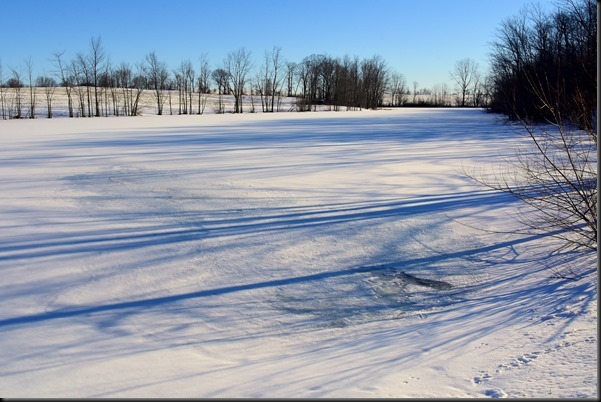 SOON OUR FAVORITE POND WILL BE THAWED 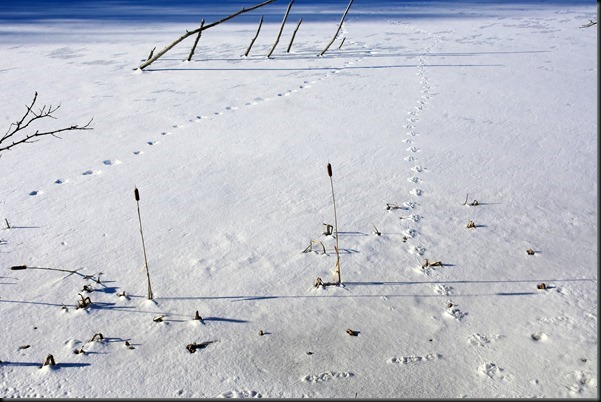 ALWAYS LOTS OF CRITTER TRACKS IN THE SNOW 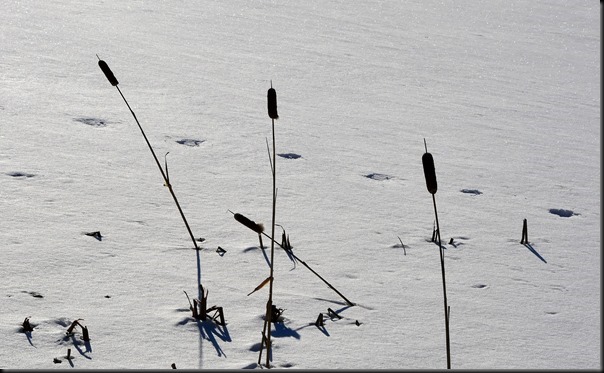 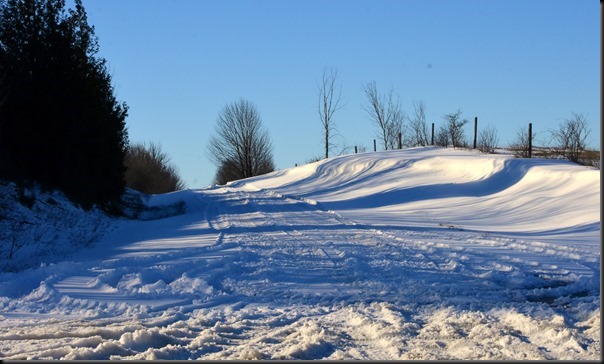 SOME WINTER ROADS ARE A LITTLE MORE CHALLENGING THAN OTHERS 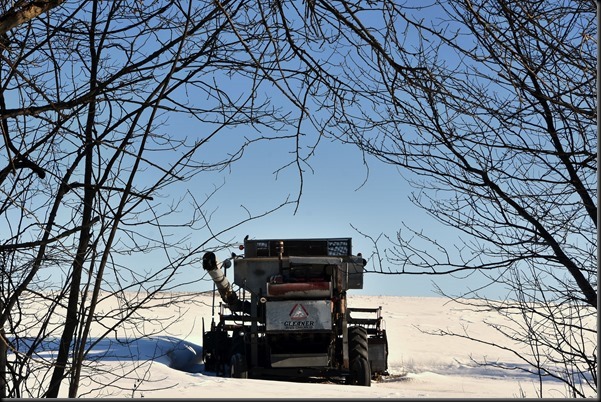 Stopping at the Sub Shop in Goderich on our way home for a 6” Tuna Sub I couldn’t help but think this will probably the last Sub for Pheebs and I.  I don’t know when they jacked their prices up but that usual $5 Sub is now pushing the $7 mark.  That’s ridiculous so there will be no more Tuna Subs for us guys.  We’ll probably have to start packing our own lunch. 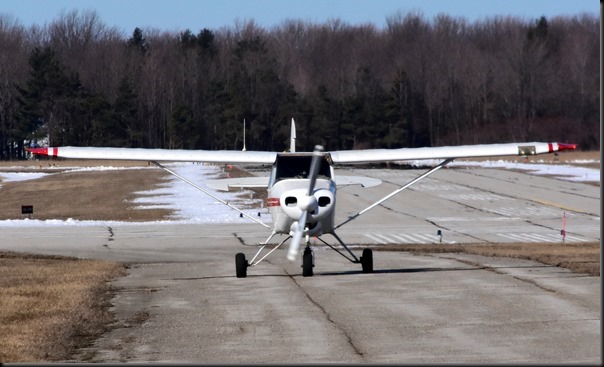 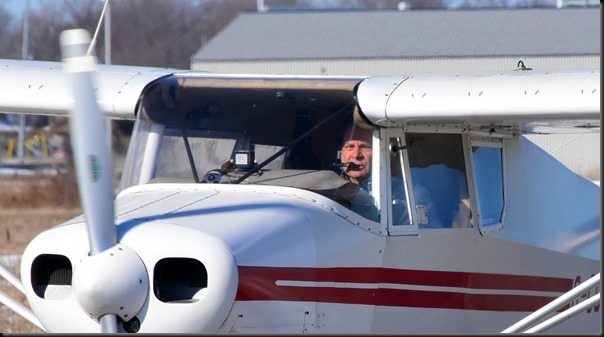 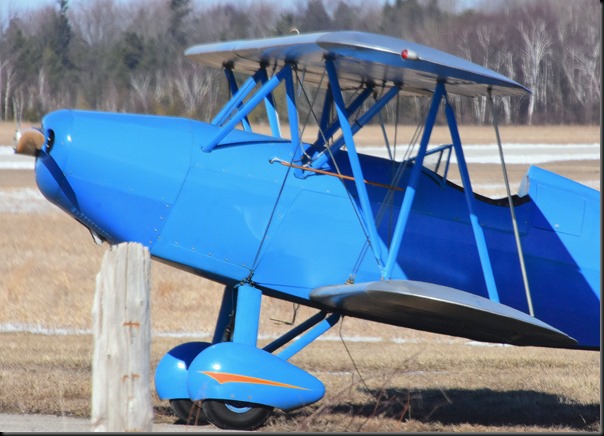 We were back before noon and that was kinda it for the day.  My midnight TV escapade caught up with me and knocked me out in my recliner for an hour or so.  There wasn’t much of an energy recovery after that so it was some puttering around outside with the snow shovel and that was about it.  Lots of ice and snow dripping off our roof again today and although not too readily noticeable the snow pack is for sure slowly slumping.  Temperature high today was 36F and I see sunny days for all of the coming week.  Nice:)) 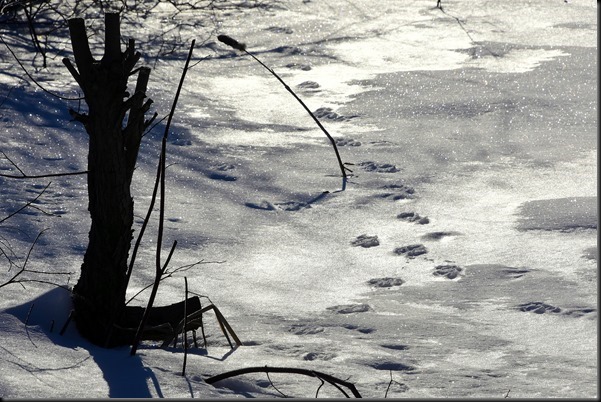 GROANER’S CORNER:(( "Hey, that's a pretty fancy watch!" exclaims the stranger.  Jake brightens a little. "Yeah, it's not bad. Check this out" - and he shows him a time zone display not just for every time zone in the world, but for the 86 largest metropoli.  He hits a few buttons and from somewhere on the watch a voice says "The time is eleven 'til six" in a very West Texas accent. A few more buttons and the same voice says something in Japanese. Jake continues "I've put in regional accents for each city". The display is unbelievably high quality and the voice is simply astounding.  The stranger is struck dumb with admiration. "That's not all," says Jake. He pushes a few more buttons and a tiny but very hi-resolution map of New York City appears on the display. "The flashing dot shows our location by satellite positioning," explains Jake. "View recede ten," Jake says, and the display changes to show eastern New York state.  "I want to buy this watch!" says the stranger.  "Oh, no, it's not ready for sale yet; I'm still working out the bugs," says the inventor. "But look at this," and he proceeds to demonstrate that the watch is also a very creditable little FM radio receiver with a digital tuner, a sonar device that can measure distances up to 125 meters, a pager with thermal paper printout and, most impressive of all, the capacity for voice recordings of up to 300 standard-size books," though I only have 32 of my favorites in there so far" says Jake.  "I've got to have this watch!" says the stranger.  "No, you don't understand; it's not ready."  "I'll give you $1000 for it!"  "Oh, no, I've already spent more than..."  "I'll give you $5000 for it!"  "But it's just not...."  "I'll give you $15,000 for it!"   And the stranger pulls out a checkbook. Jake stops to think. He's only put about $8500 into materials and development, and with $15 000 he can make another one and have it ready for merchandising in only six months. The stranger frantically finishes writing the check and waves it in front of him. "Here it is, ready to hand to you right here and now. $15,000. Take it or leave it." Jake abruptly makes his decision. "OK," he says, and peels off the watch. They make the exchange and the stranger starts happily away.  "Hey, wait a minute," calls Jake after the stranger, who turns around warily. Jake points to the two suitcases he'd been trying to wrestle through the bus station. "Don't forget your batteries."