SARASOTA FLA TO GAINESVILLE FLORIDA AND ‘OH-NO’ A MOTORHOME FLAT TIRE ON I-75!!!! 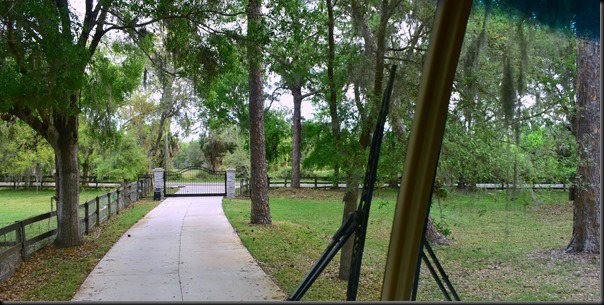 With an early morning Moon high overhead illuminating a fluffy white bank of cumulous clouds against a darkened sky I felt it was a good omen to yet another day in the life and times of the Bayfield Bunch.  Unfortunately that Omen didn’t work out so swell for us!! 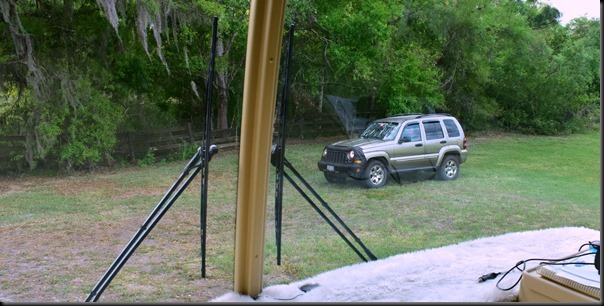 GETTING THE BIG WHEELS ROLLING OUT OF OUR SPOT 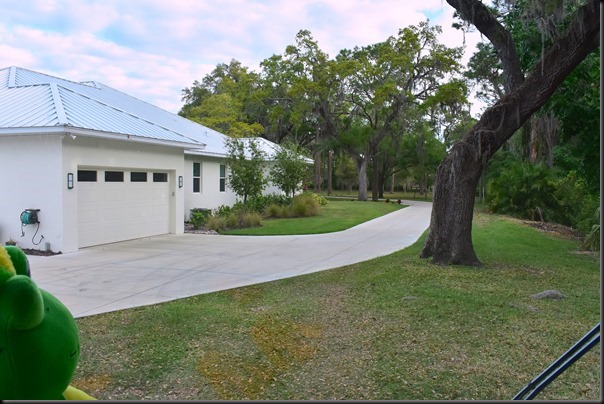 EASING OUT THE DRIVEWAY PAST JOANN AND DAVID’S HOUSE 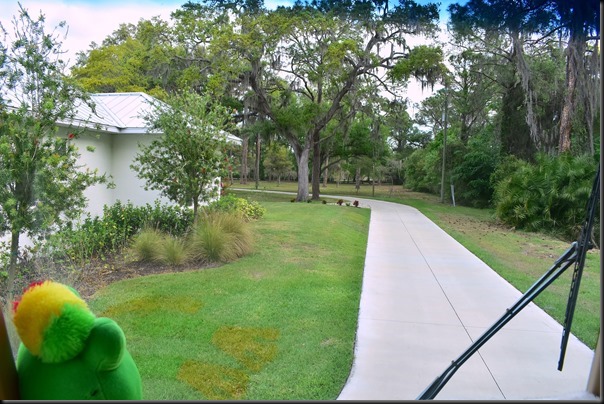 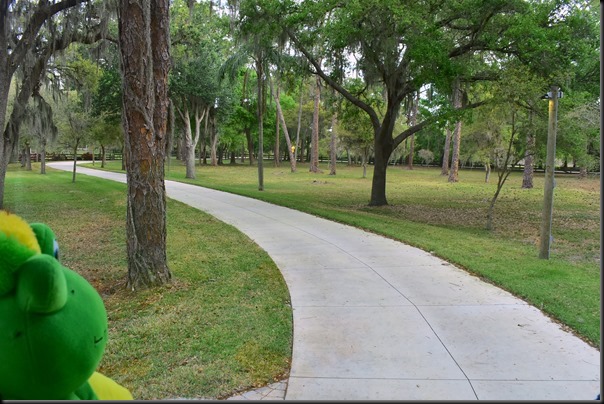 Had the big wheels rolling by 7:55 and out the gate we went with Kelly following in the Jeep.  Had planned to hook up the Jeep in a large parking lot west of us but traffic on Fruitville Road was bumper to pumper so a left turn was out of the question.  Turned right and found us a hook-up spot a short distance away.  Same place we had un-hooked the Jeep a week and a half ago.  We were soon back on Fruitville road and traffic of course was heavy as we made our way a couple miles further to I-75 and swung ourselves up the northbound ramp into the Interstates roaring traffic chaos.  Despite the Mad Max mania I was glad to be on the move going somewhere again.  I do not seem to do ‘sitting in one spot’ for any length of time very well. 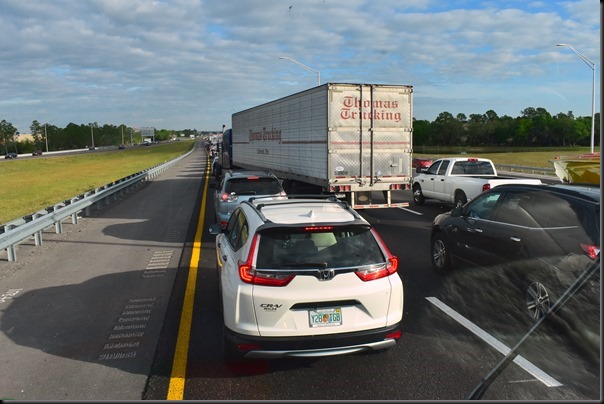 Well, our ‘going’ lasted for about 3 miles before traffic came to a grinding stop and go for about the next 3 miles until we got past an accident scene. 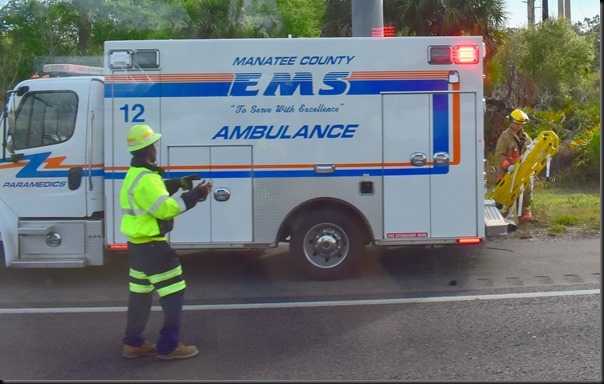 NO ACCIDENT IN THE SOUTHBOUND I-75 LANES BUT TRAFFIC WAS BACKED UP FOR MILES BECAUSE OF PEOPLE SLOWING DOWN TO GAWK AT THE ACCIDENT SCENE…..’DAMN RUBBERNECKERS!!!!!!

With the volume of traffic and the way people drive here it’s no wonder they have so many accidents.  In the southbound lanes traffic was backed up for miles because of the ‘rubber neckers’ slowing down to look at the accident in the northbound lanes.  Luckily we have a CB radio so knew from the truckers channel to stay in the left lane through the accident scene.  Had another big slow down around the Tampa area.  Heavy volume!!

We were somewhere south of Ocala about 12:15 when our Tire Minder ‘tire pressure  monitor system’ beeper went off saying the tire pressure in our outside dually driver’s side rear tire was dropping rapidly.  Luckily we had a Rest Area coming up within a mile and were able to get in there and shut things down.  Yep, the tire was flat alright.  Couldn’t even get a pressure registered on the tire gauge and when I thumped the tire with my rubber mallet the sound coming back was a dull thud instead of a healthy ‘boing’.  We have a small compressor which I hooked up but because we were low on gas our generator would not work to pump the compressor full of air and even if it had the compressor was really too small do do the job anyway. 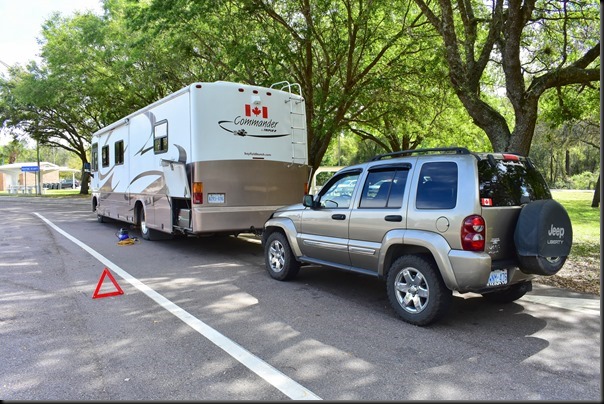 Next problem we had was our T-Mobile phone could not find us a connection to call our roadside assistance company, Coachnet.  Luckily, another RV’er pulled in a short distance away, noticed our bin doors up and my small compressor sitting on the pavement.  Walking over it was lucky he had a Verizon phone and Kelly was able to use it to call Coachnet and make arrangements for ‘Millennium Tire Service out of Hudson Florida to come to our assistance.  The Class A RV fella who helped us out with his Verizon phone was from Tennessee. 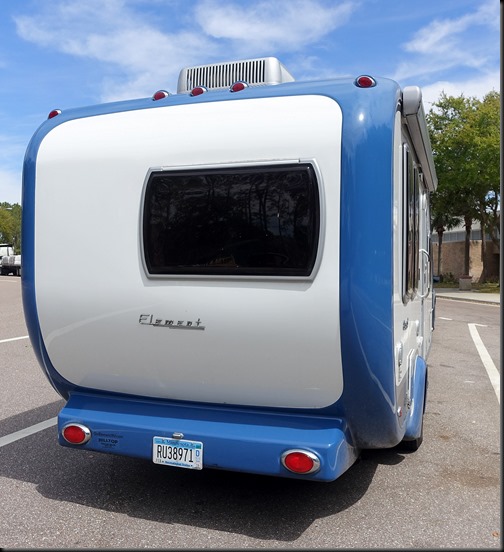 The Millennium Tire fellow showed up about 1:15 and set to work getting the big 235/80R-22.5 inch tire off the rig.  No easy task considering the wheel had not been off for a long time.  He had quite a time of it but finally off it came.  Couldn’t find any obvious punctures or rips so next had a look at the valve stem and sure enough that was the culprit.  What is it with so many tire and rim valve stem problems these days.  Think our tire guys name might have been John and with 31 tire repair years under his belt he soon had the valve stem problem fixed, tire aired up and back on.   Minutes later we were back on I-75 once again fighting our way North.  Two thumbs up for MTS Millennium Tire Service who have 3 facilities based in Clearwater, Ruskin, and Hudson Florida:)) 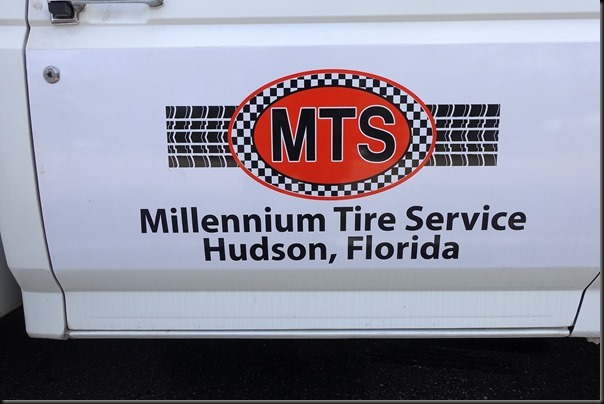 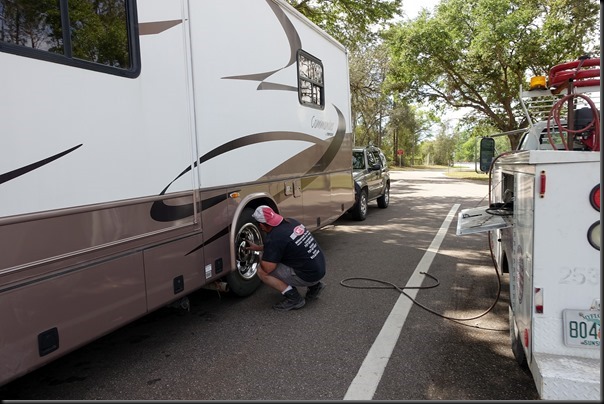 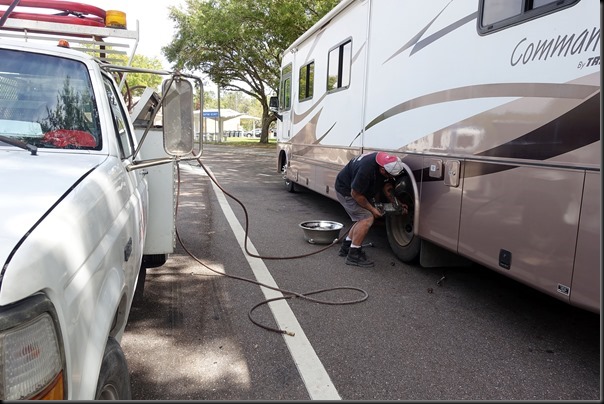 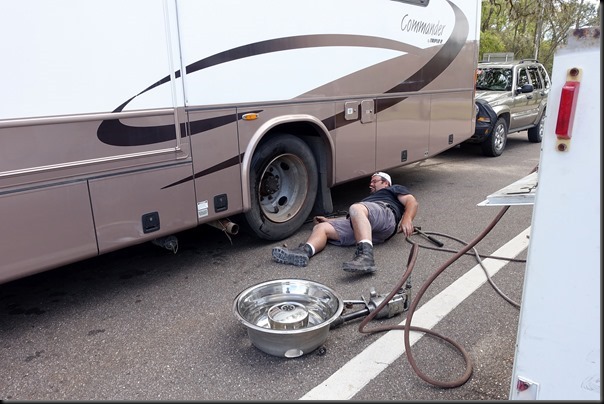 HE HAD QUITE A TIME GETTING THE WHEEL OFF 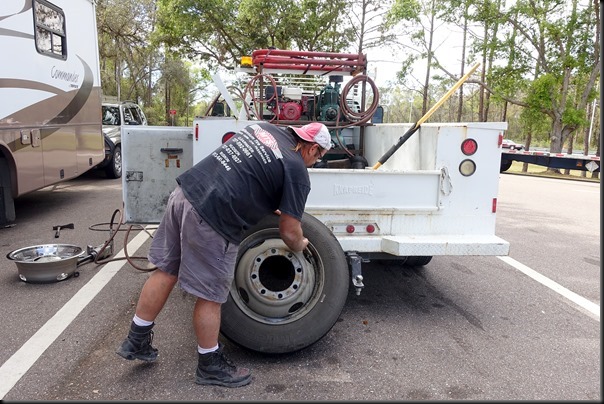 WORKING ON THE VALVE STEM 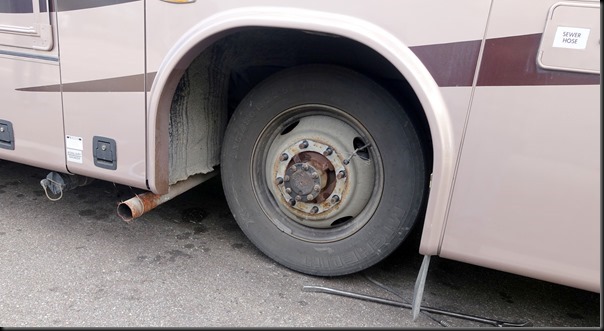 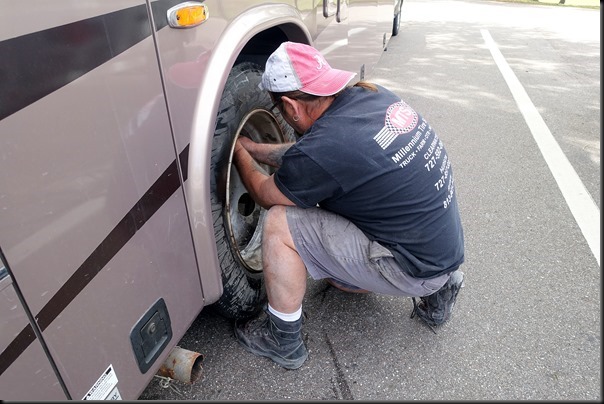 PUTTING THE WHEEL BACK ON

Luckily we were not in any kind of hurry today and with our original destination being Gainesville Florida we had plenty of time to get there.  Needing myself a new hat we had noticed there was a Bass Pro Shop right along I-75 off exit 384.  Also a Walmart but we missed that so popped into a nearby Publix Store for some groceries.  Bass Pro Shops allow overnight RV parking so our purpose for going there was two-fold. 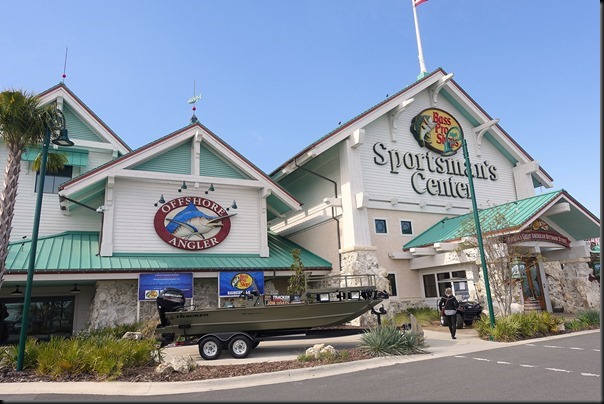 IT’S QUITE A SPORTY LOOKING PLACE BOTH INSIDE AND OUT 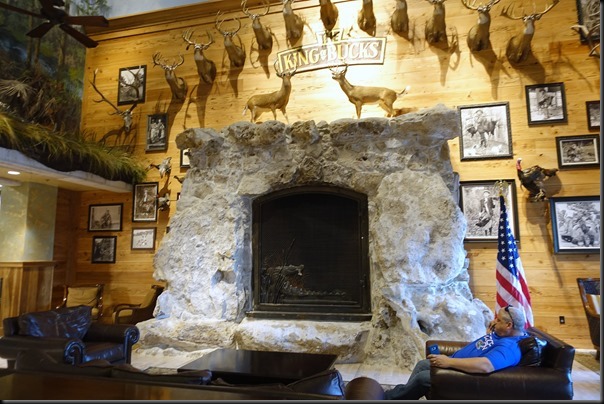 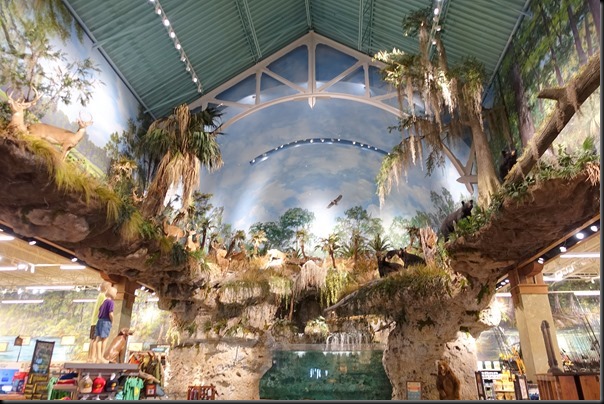 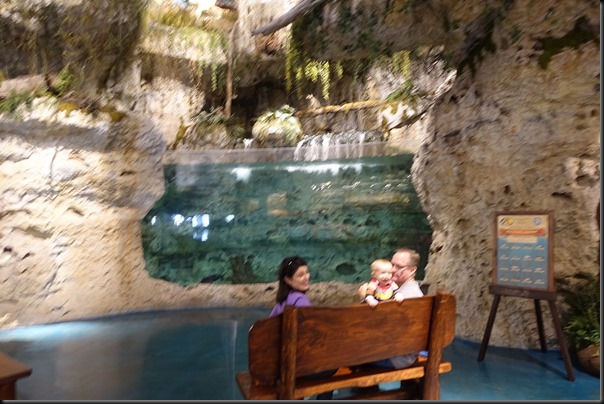 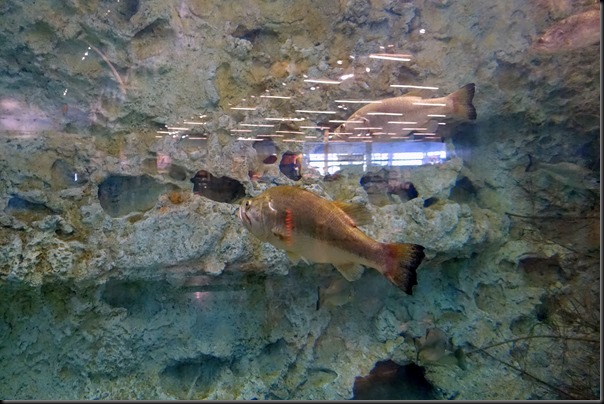 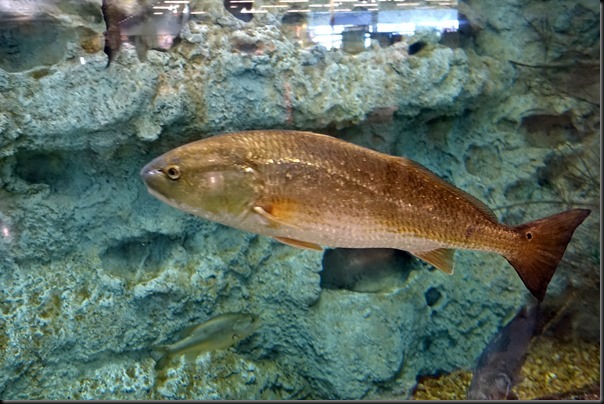 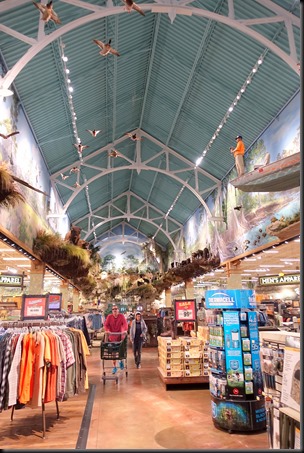 PROBABLY A DOZEN  OR SO BIG FISH IN THAT AQUARIUM

I wasn’t too impressed with their selection of hats but I did buy a cheaper one anyway which will be fine for scruffing around in.  My Mojave National Preserve hat is over two years old and showing it’s age plus I have not had much success in cleaning it.  While at Bass Pro I also grabbed myself a brand new comfortable pair of Merrill hiking/walking shoes.  My old cheap-o Wally-World ones will make good bedroom slippers. 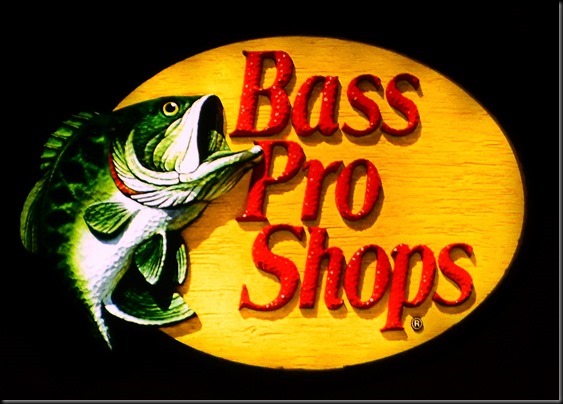 Found us a nice quiet place in a back parking lot at Bass Pro and shut things down for the night.  We were both feeling totally wrecked after a somewhat stressful day.  Not sure where we will be Friday night but I suspect either somewhere in Georgia or Alabama.  We’ll hash that out in the morning. 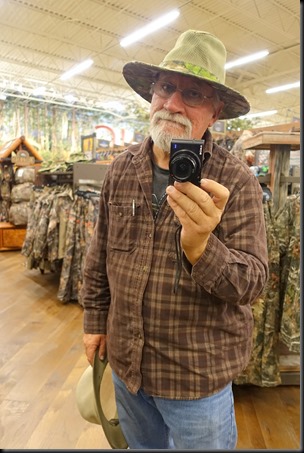 GROANER’S CORNER:( A young couple, madly in love, decided to get married. But as the wedding day neared, both grew increasingly nervous over secret problems they had never shared with anyone. Privately, the groom-to-be approached his minister.  “I’m really concerned about this marriage,” the young man said.  “Don’t you love her?” the pastor asked in surprise.  “Of course,” the groom said. “But I have unbelievably smelly feet—and I’m afraid my fiancée won’t be able to stand them.”  “Oh, is that all?” the pastor replied. “Look, all you need to do is wash your feet twice a day and wear socks all the time.”  The groom thought it over and decided it just might work.  Meanwhile, the nervous bride had privately approached the minister’s wife. “I’m so worried,” she sobbed. “I have really bad breath when I wake up each day!”  “Oh, dear,” the pastor’s wife replied,” everyone has bad breath in the morning. Don’t worry about it.”  “No, you don’t understand,” the bride implored. “My morning breath is so awful, my fiancé won’t even want to be near me!”  “Well, I have an idea,” the pastor’s wife said soothingly. “Set your alarm just a few minutes before your husband wakes up. Run to the bathroom, brush your teeth, and gargle with mouthwash before he gets out of bed. The key is not to say anything until you’ve taken care of your breath.”  The bride thought it over and decided it just might work.  In time, a beautiful wedding was held and the bride and groom enjoyed the day without once worrying about their secret problems. For several months they managed to keep their issues to themselves.   Then one morning, the husband awoke before dawn to find that one of his socks had come off in the night. Frantic, he searched the bed, afraid of what might happen if he didn’t find his sock soon. His bride woke with a start, and, without thinking, blurted out, “What in the world are you doing?”  “Oh, dear!” the young man wailed. “You swallowed my sock!”

Here's the exercise program I used to stay in shape this past holiday season.  You might want to take it easy at first, then do it faster as you become more proficient. It may be too strenuous for some.
ALWAYS CONSULT YOUR DOCTOR BEFORE STARTING ANY EXERCISE PROGRAM!
NOW SCROLL DOWN...

That's enough for the first day.
I trust you survived!!