IT WASN’T THE SMOKE THAT TURFED US OUT OF TIM HORTONS……IT WAS THE FIRE DEPARTMENT!! 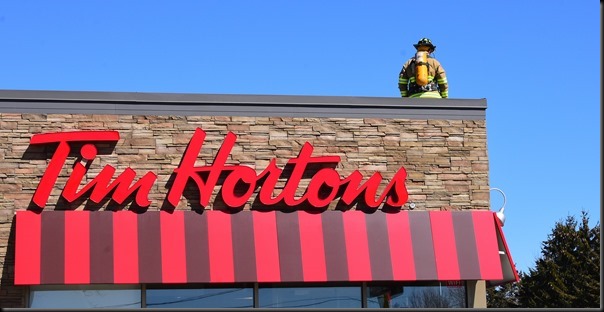 Another gorgeous looking day with clear skies and an abundance of sunshine.  Air is still on the cold side but no matter, it's Spring.  It was under these clear blue depth skies that I made my way east of Bayfield to the small village of Mitchell Ontario this morning.  Took the backroads and enjoyed the scenery. 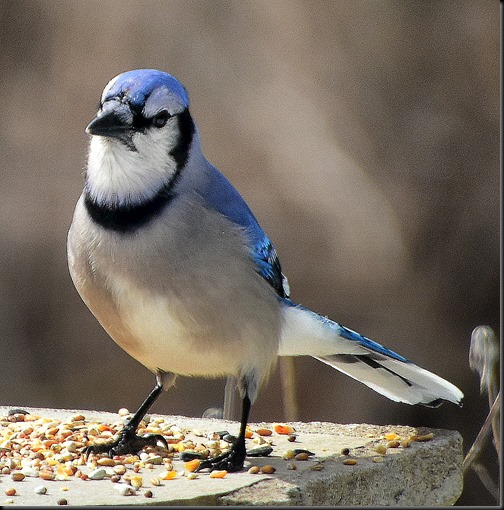 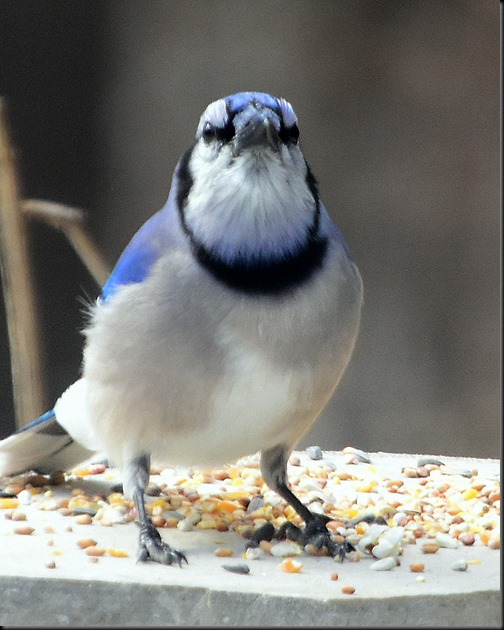 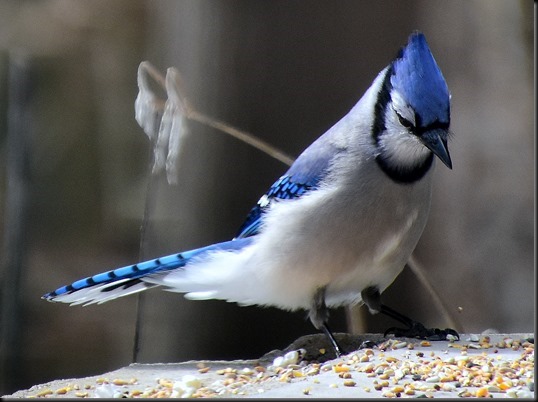 My good buddy Jim (Lifetime Sentences) and I hadn't had one of our ass flattening 6 hour coffee blow-outs since late last summer so this morning at 10 a.m. we met at Mitchell's Tim Horton coffee shop at the east end of town.  Jim and his guitar had to be at a Jam session at 1 o'clock so we had us a 3 hour window of catching up to do.  Conversation flowed until it was temporarily interrupted by something I saw outside the window.  Smoke!!   And lots of it too.  It seemed to be pouring off the roof and rolling down through the parking lot where I had parked the Jeep.  I pointed it out to Jim and we looked around at other patrons and everybody seemed to be carrying on with their coffees, conversations, and donuts.  So we did too…..but no donuts of course.  The smoke kept pouring down outside and a few people got up and left.  After maybe 10 minutes the smoke stopped and 10 minutes after that 3 fire trucks showed up with lights flashing.  Didn't seem to be any panic or smoke anywhere so we continued on with our conversation.  Another 15 minutes or so passed with firefighters walking around outside the building and then one of the Tim Hortons employees announced we would have to vacate the building so vacate the building we did.  There were probably only 7 or 8 of us brave souls left inside by this time anyway.  And that was it for our first coffee blow-out of the year.  Jim headed off for his Jam session and I headed west for Bayfield.  When I drove out of Hortons parking lot there still was no smoke anywhere but lots of firemen were deploying their houses and stuff anyway.  Maybe they were treating it as a good old Saturday afternoon practice run. 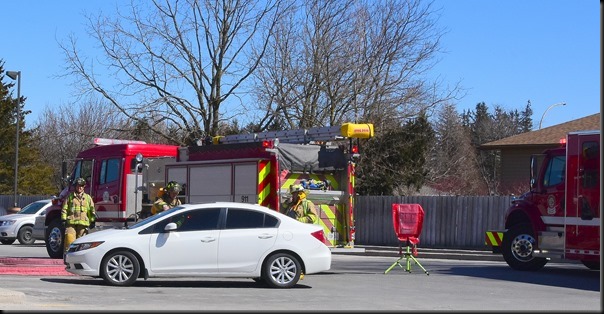 A LADY BESIDE ME SHOUTED, “LOOK THERE’S A FIREMAN ON THE ROOF’ SO THAT’S WHEN I GRABBED MY CAMERA FOR A FEW SHOTS 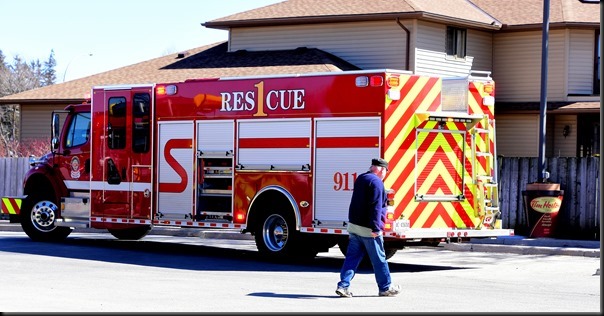 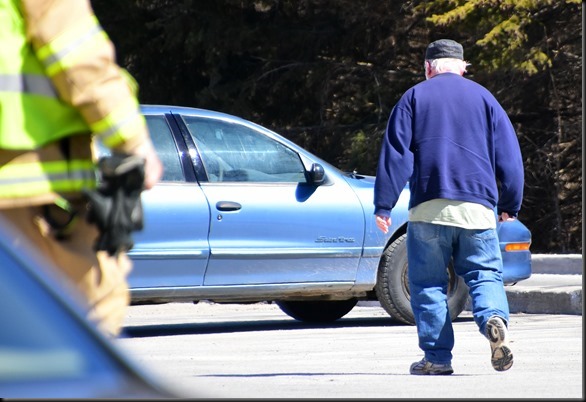 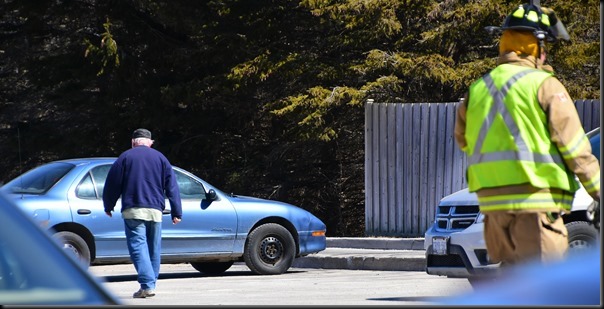 BY GOLLY HE’S ALMOST MADE IT TO HIS CAR

Took the backroads back to Bayfield and I again marveled at the beautiful looking day it was with great stretches of farm fields showing through the snow.  A very typical early Spring day and what a nice feeling that always is each year around this time.  A real 'Spirits' booster for sure.

Other than the usual snow moving, ice chopping, and bird feeding again this afternoon there wasn't much of anything else happening and that's just kinda how I like my afternoons to be these days. 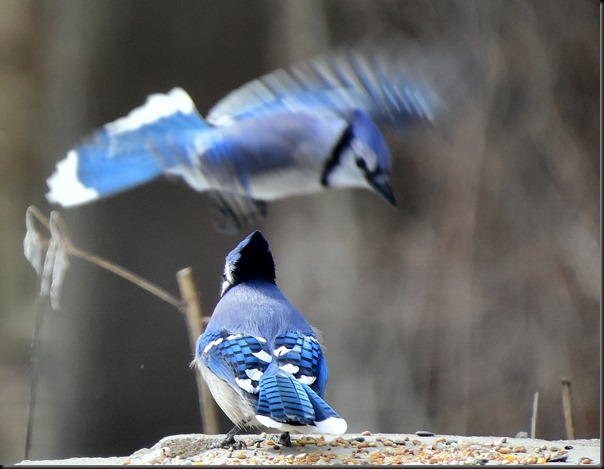 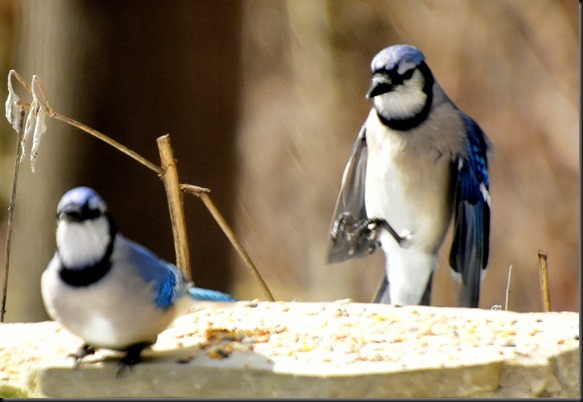 One of the topics Jim and I touched on this afternoon was our childhoods and that reminded me of something.   In July of 2011 I wrote this about my memories as a young Boy………. Heating water on an old cast iron coal/wood stove for washing, once a week baths, bringing in water from a pump outside, coal oil lamps for when the electricity went off as it frequently did, no television, wind up clocks, buckled galoshes on cold winter feet , a hand crank phone on the wall, pee pots under the bed, wooden sided refrigerator with a big block of ice in the top part, no such thing as a supermarket & fish was pedaled on Fridays by a man pushing a wagon around my little home town of Tavistock Ontario, Canada.  Knives could be sharpened from a vendor the same way & milk was delivered by a horse drawn wagon.  I can still see our local happy smiley faced chicken farmer standing just inside our door with his wooden basket of freshly killed chickens. (de-feathered & headless of course) A folded white cloth covered 2 or 3 at a time & that is how my Mother selected & bought our meat in those days.  A big old wooden floor model Crosley radio was the main source of entertainment in our house & my Mother, my Grandfather, my Uncle Fred & I would gather around it Sunday night's for 'Our Miss Brooks, Fibber McGee & Molly, the Great Gildersleeve & many other great old time radio shows. Arthur Godfrey in the mornings, Gunsmoke & Gangbusters on Saturday nights. Friday night boxing matches sponsored by Gillette.  We had an old crank up Victrola which could play big round 78 RPM records.  I listened to those records over & over. My Mother could play piano by ear & it was always a great treat for me to sit on the piano bench beside her as she played my favorite tune, Greensleeves. Our house always had music in it & I'm very grateful for that to-day. Whether it was the radio, the Victrola, my Mother on piano which my Grandfather bought one day on impulse or an old record player years later, there was always music in the house. To this very day I still surround myself with music from dawn to dusk. My Grandfather made a few violins and could really make them screech.  Sometimes I would like nothing better than to just climb aboard a time machine to go back & turn on that big old wooden floor model Crosley radio again.  I'd like to tune in Amos & Andy & gather round in the living room with my Mother, my Grandfather, & my Uncle Fred to listen & laugh once again to a simple humor that seems to be all but lost and gone the way of the Dinosaur now. A way of life, a way of family, a way of remembering.  And some days those old memories just keep on coming & coming and I like when they do:))

GROANER'S CORNER:((  A man is struck by a bus on a busy street in New York City. He lies dying on the sidewalk as a crowd of spectators gathers around. "A priest! Somebody get me a priest!" the man gasps. A policeman checks the crowd but finds no priest, no minister, no man of God of any kind.  "A PRIEST, PLEASE!" the dying man says again. Then out of the crowd steps a little old Jewish man of at least eighty years of age."Mr. Policeman," says the man, "I'm not a priest. I'm not even a Catholic. But for fifty years now I'm living behind St. Mary's Catholic Church on Third Avenue, and every night I'm listening to the Catholic litany. Maybe I can be of some comfort to this man."  The policeman agrees and brings the octogenarian over to the dying man. He kneels down, leans over the injured and says in a solemn voice: "B - 4. I - 19. N - 38. G - 54. O - 72."

A guy goes into a bar, orders twelve shots, and starts drinking them as fast as he can. The bartender says, "Dang, why are you drinking so fast?"  The guy says, "You would be drinking fast, too, if you had what I had."  The bartender asks, "What do you have?"  The guy answers, "75 cents."