PHEEBS AND I MAKE IT OUT FOR A MORNING JEEP RIDE 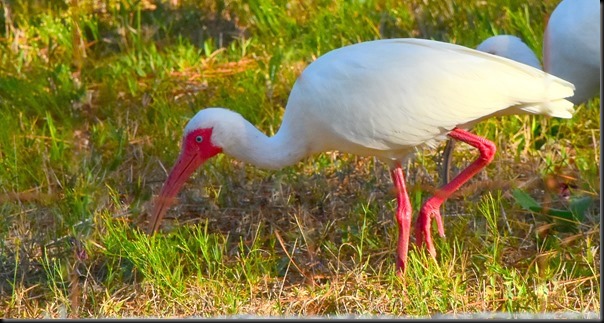 Left our windows and door open to let in the cooler night air which also happened to let in all the nice morning sounds.  Roosters, Horses, Birds, Burros, Llamas, and a few barking dogs in the neighborhood.  Strange, but no train whistles anywhere. 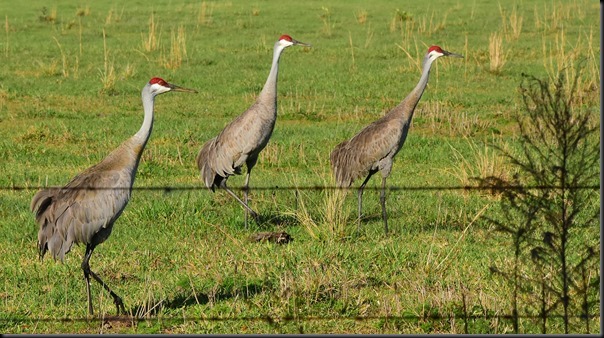 RECOGNIZED THESE FELLERS RIGHT AWAY AS SAND HILL CRANES 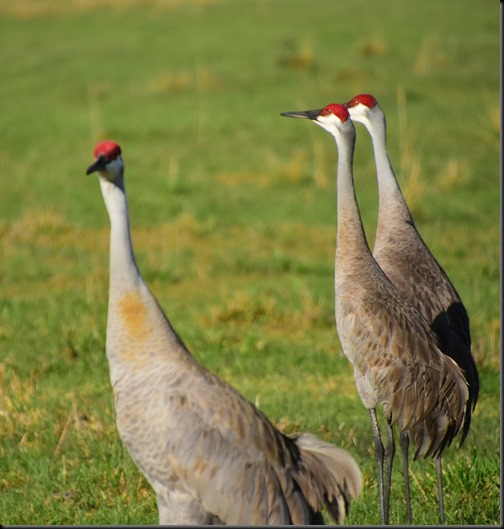 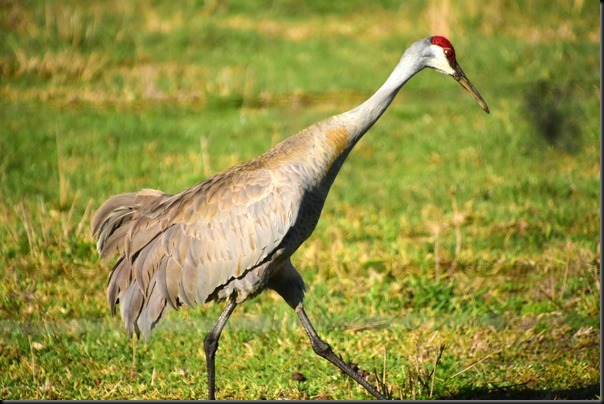 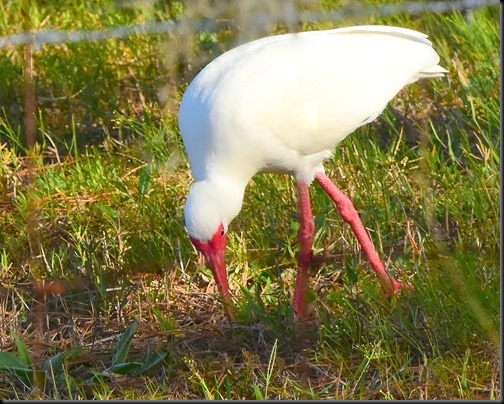 I’M GUESSING THIS CHAP AS A WHITE IBIS

Figured Pheebs was needing a Jeep ride so I loaded her up and off we went.  I was curious to see if we could find us a few quiet back roads to relax and enjoy some backwoods scenery.  Headed east out Fruitville Road on a very busy two lane highway with everybody driving with the pedal to the metal.  People seem to in such a big hurry here.  It was not until we reached Myakka Road and turned right then turned right again that we finally got ourselves some respite from the manic traffic. 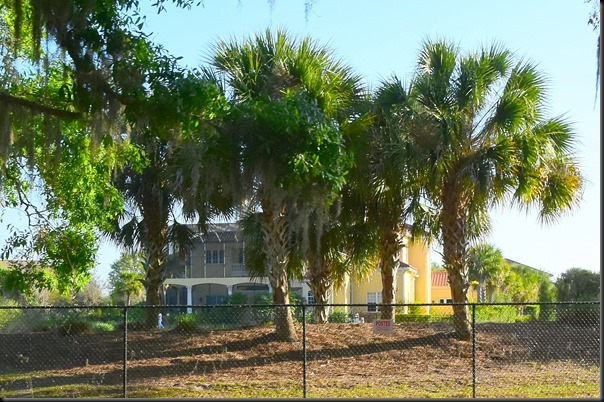 SOME PRETTY SCHNAZZY HOMES AND PROPERTIES IN THE AREA 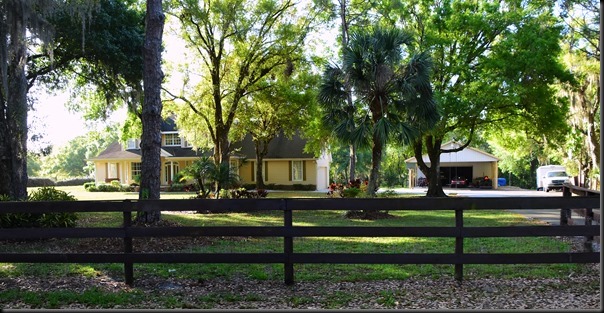 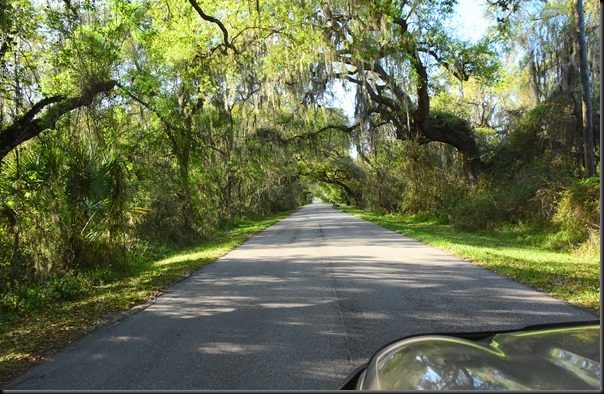 WHAT A TREAT TO FIND SOME ROADS WITHOUT TRAFFIC ON THEM 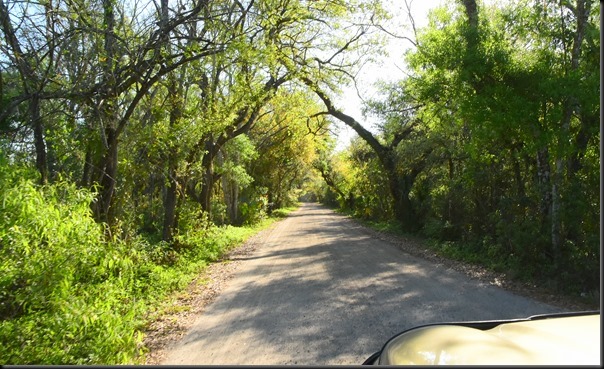 AND WE EVEN FOUND A GOOD OLD DIRT ROAD AS WELL 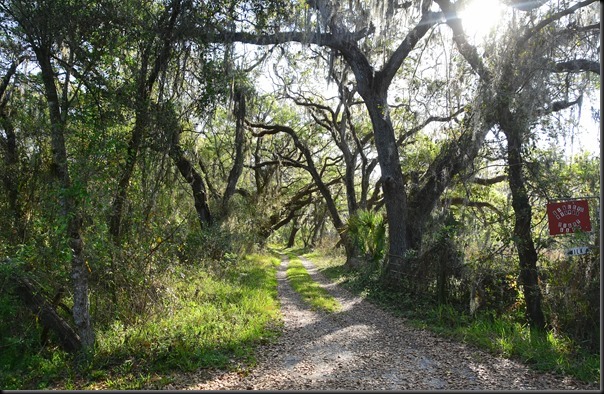 NOW THERE’S A PROPERTY THAT WOULD INTEREST ME 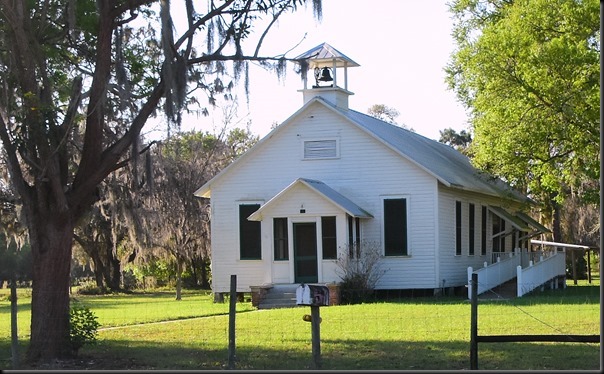 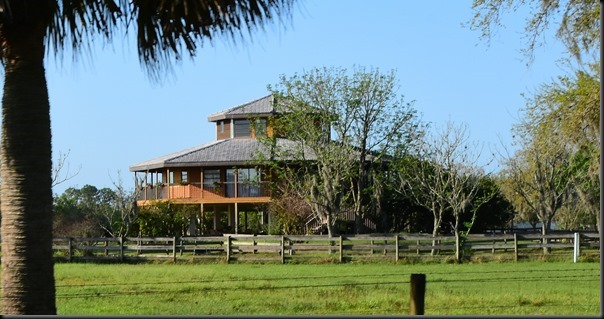 Found much of the countryside to be similar to rural Ontario while other sections looked more like one would expect Florida to look like with moss draped trees and swampy areas with big green leafy plants.  We didn’t stop anywhere for a leg stretch because I was leery about Pheebs running into poisonous snakes.  It wasn’t a long drive we had and we were back to the rig about an hour later. 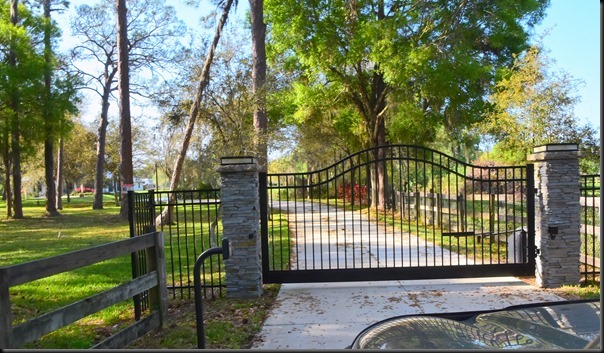 We soon had to close everything up, crank up our fans and turn on the A/C.  Never ventured outside again until it was time to go over to Aunt Jean’s place.  It’s Sirloin Steak night at Miller's Ale House so Kelly and I took Jean out for a steak supper while Pheebs held the Fort down at Jean’s place.  Kelly was the only one ending up having steak, Jean had Chicken Fingers and I of course had myself a big old hamburger.  I’ve never been big on steaks. 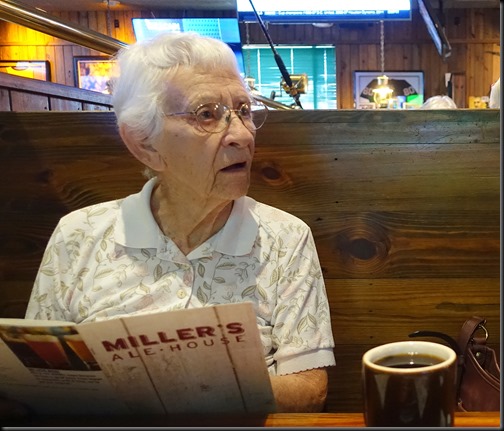 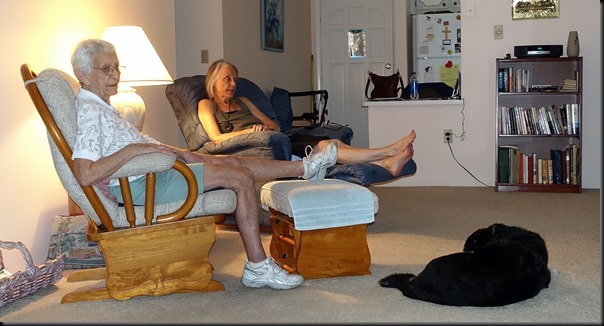 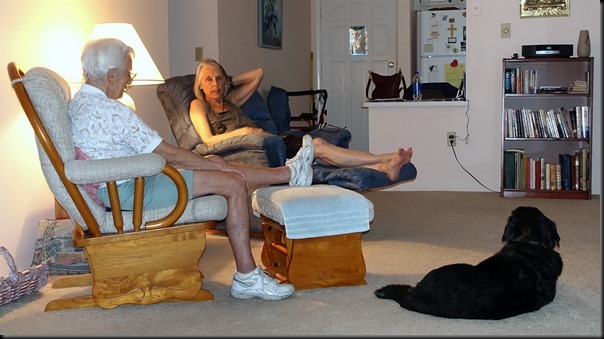 GROANER’S CORNER:((  A wife and her husband were having a dinner party for all the major status figures in Rome, Italy. The wife was very excited about this and wanted everything to be perfect.   At the very last minute, she realized that she didn't have any snails for this dinner party, so she asked her husband to run down to the beach with the bucket she was handing him to gather some snails. Very grudgingly he agreed.  He took the bucket, walked out the door, down the steps, and out to the beach. As he was collecting the snails, he noticed a beautiful woman walking alongside the water just a little further down the beach. He kept thinking to himself "Wouldn't it be great if she would even just come down and talk to me." He went back to gathering the snails.  All of a sudden he looked up, and the beautiful woman was standing right beside him. They got to talking, and she invited him back to her place.  They were at her apartment a ways down the beach, and they started messing around. It got so steamy that he was exhausted afterwards and passed out there.  At seven o'clock the next morning he woke up and exclaimed, "Oh no! My wife's dinner party!"  He gathered all his stuff together, grabbed his bucket of snails and fled out the door.  He ran down the beach all the way to his apartment. He ran up the stairs of his apartment. He was in such a hurry that when he got to the top of the stairs, he dropped the bucket of snails.  There were snails all down the stairs. The door opened just then, with a very angry wife standing in the door way wondering where he's been all this time.  He looked at the snails on the steps, then he looked at her, then back at the snails and said, "Come on guys, we're almost there!"