BEAUMONT TEXAS TO THE MISSISSIPPI WELCOME CENTER….AND A MUCH BETTER DAY:)) 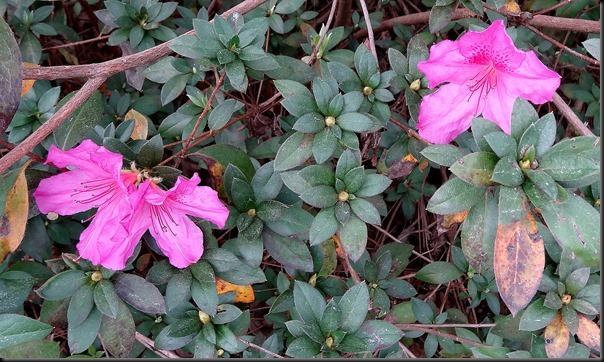 HOW NICE TO SEE SOME MISSISSIPPI FLOWERS

Luckily traffic noise quieted down in Walmart’s parking area and sleep wasn’t a problem.  Four other RV’s in the southwest corner of Walmart’s parking lot.  A warm comfortable night and nice to not have heat on in our rig to keep warm.  Could hear Crickets chirping outside and I liked that.  We were in the huge Parkdale Mall complex in Beaumont’s north end and lucky for us not far from I-10.

BIT OF A FOGGY START THIS MORNING ON I-10 EAST

Isn’t it amazing what a good night’s sleep can do and we both woke up feeling a whole lot better than we were feeling when we went to bed. I should probably not be writing posts when I’m tired and cranky.  On those days maybe I should just say we had a marvelous day and everything was wonderful. 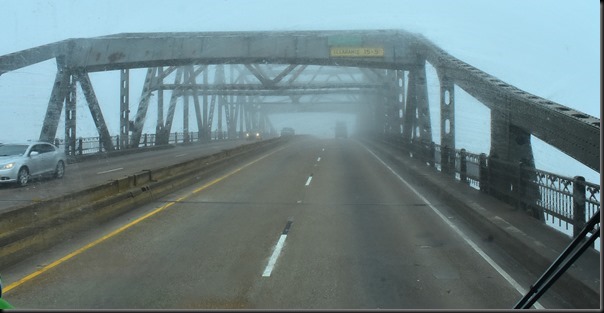 BIG BRIDGE OVER THE MISSISSIPPI RIVER 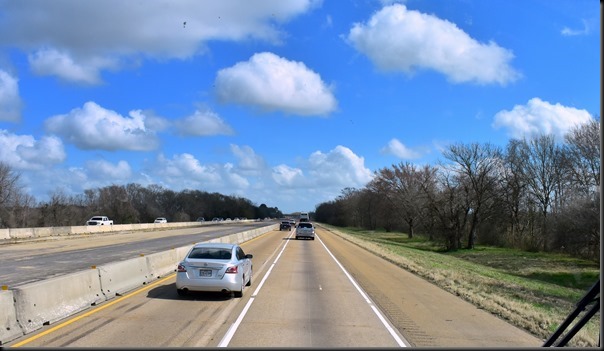 FOG FINALLY LIFTED AND WE HAD US SOME BLUE SKIES AGAIN

STILL SEEMS TO BE A LOT OF FLOODING IN THIS AREA 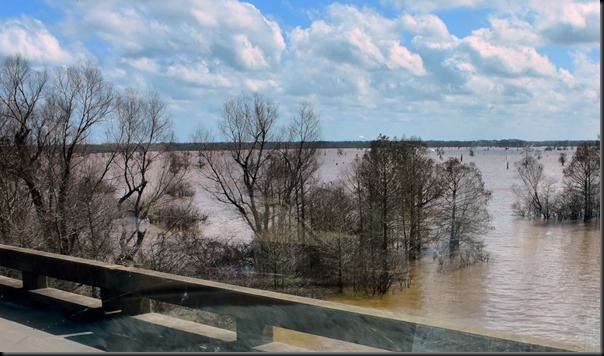 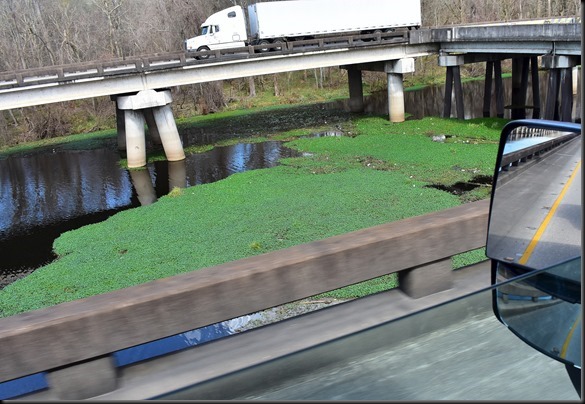 With frogs chirping in the water ditch beside us we pulled out of the Walmart parking lot at 8 a.m.  Garmin Gertie had us eastbound on I-10 in less than ten minutes with an accompanying light fog.  I was surprised at how light the traffic was on I-10 and that kind of set the pace for the remainder of the day. 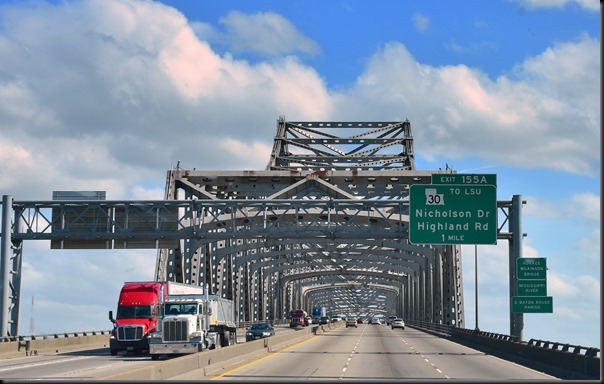 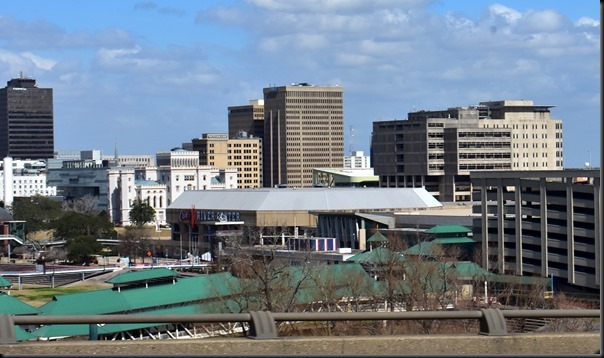 Toyed with the idea of taking highway 12 which runs parallel to I-10 on the north side but with the Interstate running along so smoothly we decided to just stick with it.  A few construction zones but nothing too serious. 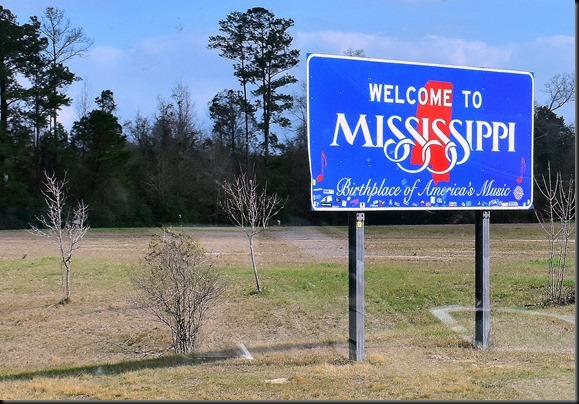 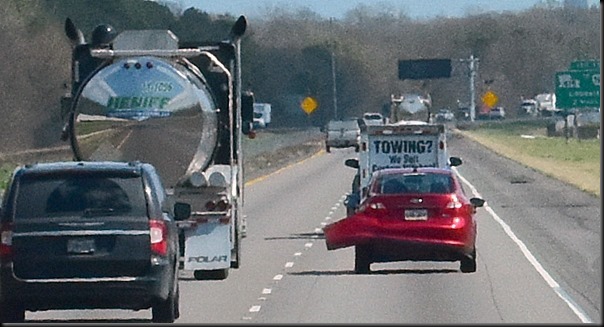 I WONDERED IF THIS GUY KNEW HIS BUMPER WAS COMING OFF

Meant to thank readers for suggestions regarding alternative routes around Houston Wednesday.  The route Dizzy suggested is the same one I had been looking at.  Dizzy lives somewhere east of Bernham but our GPS (Garmin Gertie) took us north up 105 to Navasota.  That’s a nice area you live in Dizzy and I liked the homey look of Bernham when we went through and I did leave a reply to your last comment on our blog:)) 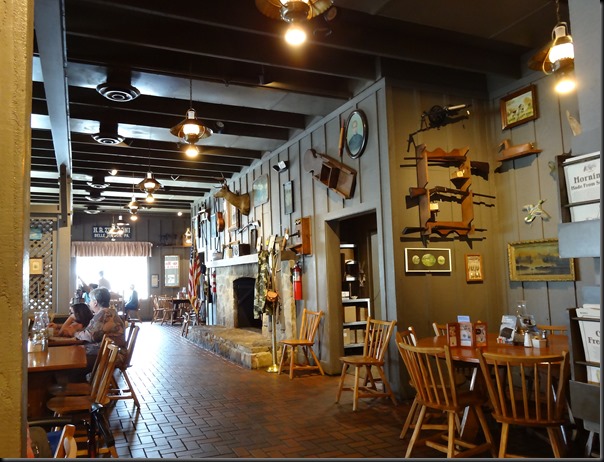 WELL I GUESS Y’ALL KNOW WHERE WE ARE NOW

Think it was around 10 this morning west of Lafayette Louisiana when we spotted a Cracker Barrel sign.  Hadn’t crackled ourselves since heading west late last December so we weren't long in throwing the anchor out for a Crackle Barrel stop.  Great breakfast as usual and it wasn’t crowded for a change.  Pheebs got a chance to run around on some real grass as well. 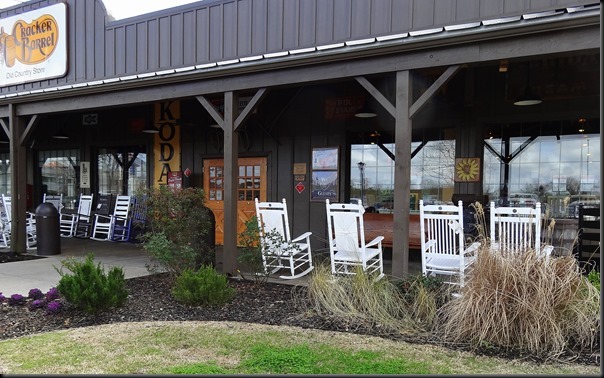 YEP IT WAS CRACKER BARREL ALRIGHT 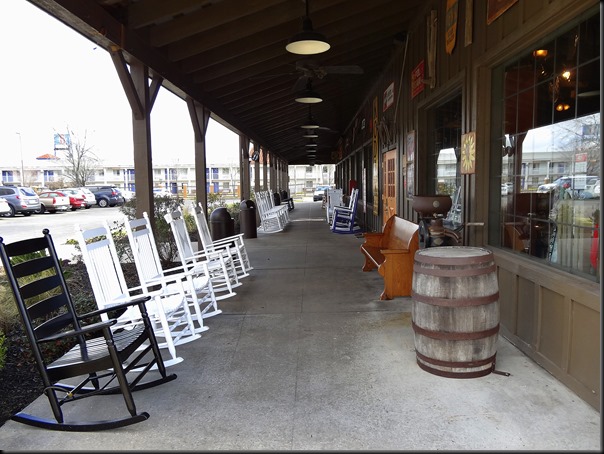 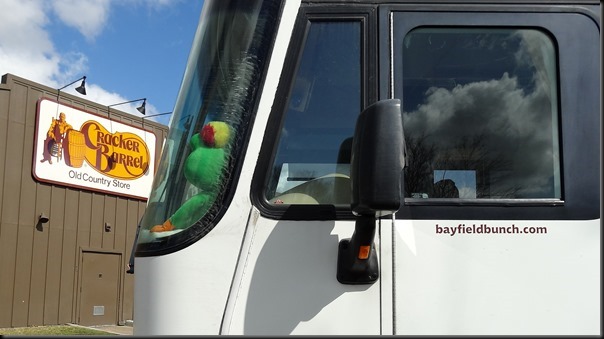 It was early afternoon when we began thinking about where to pull in for the night and seeings how the state of Mississippi was just ahead we decided to check out the John C Stennis Space and Mississippi Welcome Center.  Luckily they allow overnight parking and have half a dozen RV pull through sites,  There’s another area for trucks as well but it’s far enough away to not be a bother,  However trucks and cars leaving that area drive right by the RV pull through sites so it can be very noisy whenever a truck rolls by a dozen feet away.  Other than that it’s a nice pavement and grass area with shady trees, picnic tables, and garbage receptacles.  We might just stay here for a second night, haven’t decided yet.

HEY WHAT THE HECK IS THAT OVER THERE??  TURNS OUT IT’S THE JOHN C STENNIS SPACE CENTER 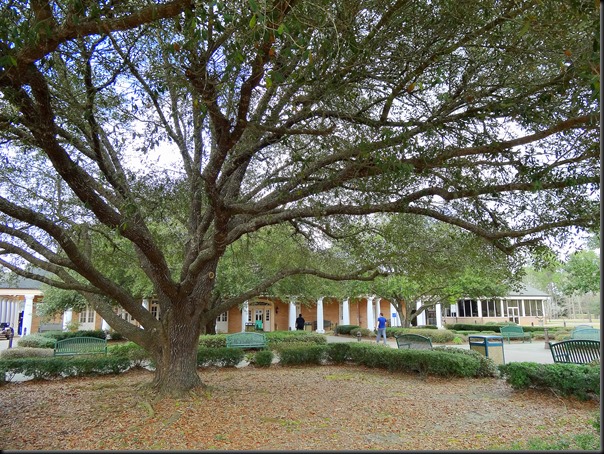 MISSISSIPPI WELCOME CENTER ON EASTBOUND I-10 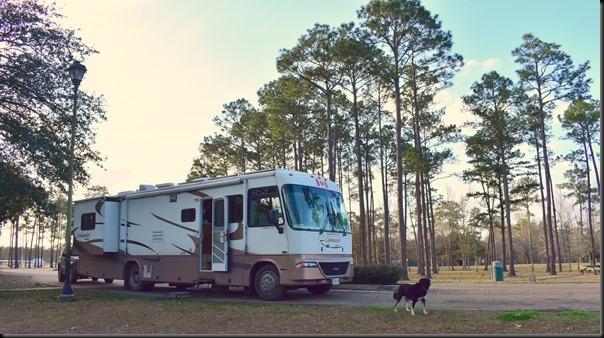 WE HAVE US A NICE SCENIC SPOT WITH CRICKTS, FROGS, AND A FEW CHIRPING BIRDS 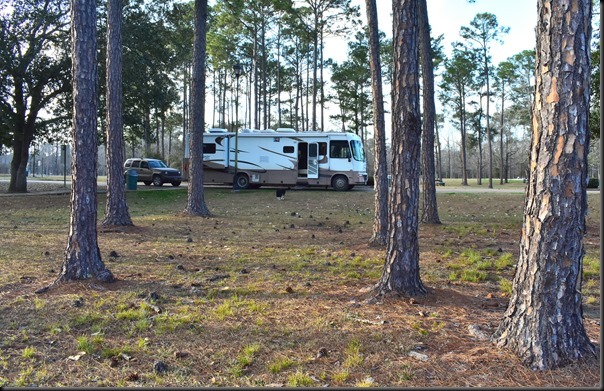 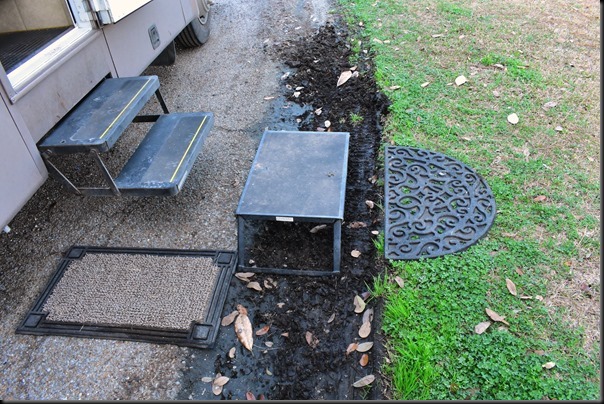 MISSISSIPPI MUD OUTSIDE OUR DOOR BUT I’VE GOT THE PROBLEM COVERED:)) 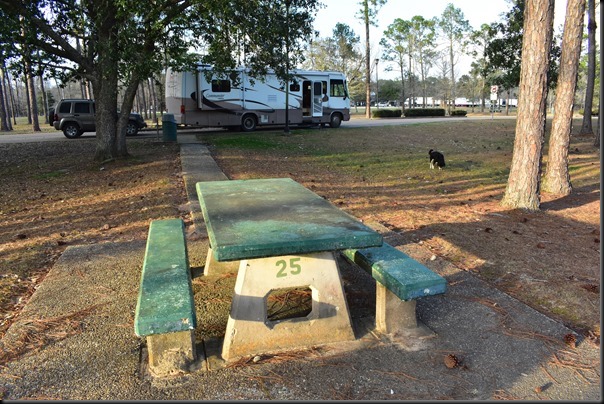 PICNIC TABLE ON OUR SITE 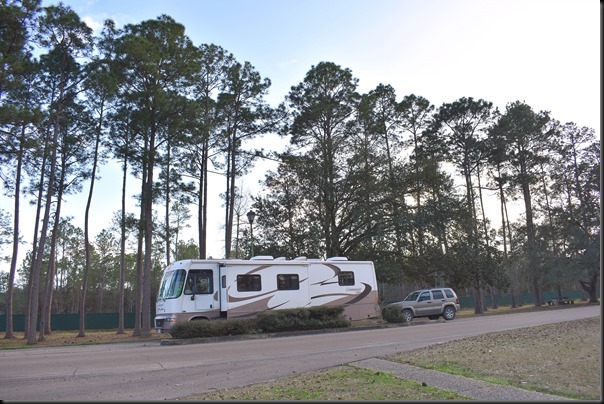 TO BAD ABOUT THE CENTER’S EXIT  ROAD BEING SO CLOSE

To say our Motorhome and Jeep are a huge mess would be putting it extremely mildly.  Neither one of those vehicles have ever been so full of salt, desert dust, and road grime as they are right now but today at least I was able to gather up enough energy to clean some of the windows and mirrors on both vehicles. 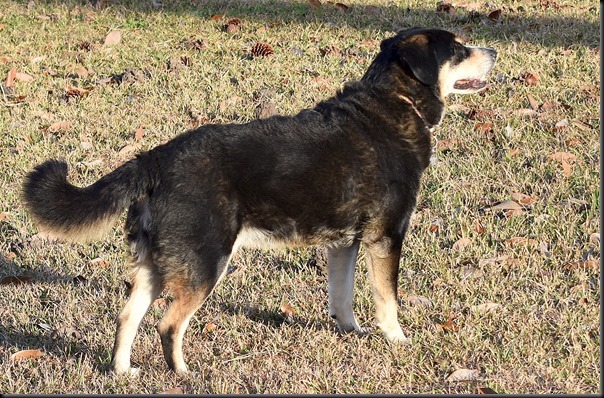 GROANER’S CORNER:((  Negotiations between union members and their employer were at an impasse. The union denied that their workers were flagrantly abusing the sick-leave provisions set out by their contract.  One morning at the bargaining table, the company's chief negotiator held aloft the morning edition of the newspaper, "This man," he announced, "called in sick yesterday!"  There on the sports page, was a photo of the supposedly ill employee, who had just won a local golf tournament with an excellent score.  A union negotiator broke the silence in the room.  "Wow!" he said. "Just think of the score he could have had if he wasn't sick!"

A woman was trying hard to get the catsup to come out of the bottle. During her struggle the phone rang so she asked her four-year-old daughter to answer the phone.  "It's the minister, Mommy" the child said to her mother.  Then she added, "Mommy can't come to the phone right now. She's hitting the bottle."

Q. Who was the greatest comedian in the Bible?
A. Samson. He brought the house down.