AFTER NEARLY A YEAR AND A HALF WE FINALLY GOT TO SEE AUNT JEAN AGAIN:))))) 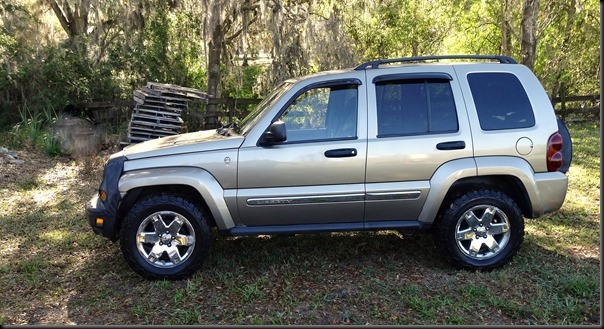 I’m guessing it’s been well over a year since we last heard raindrops on our rig’s roof and although there were not a lot of them last night it was a sound that always brings back pleasant memories of old tenting days many, many, Moons ago. 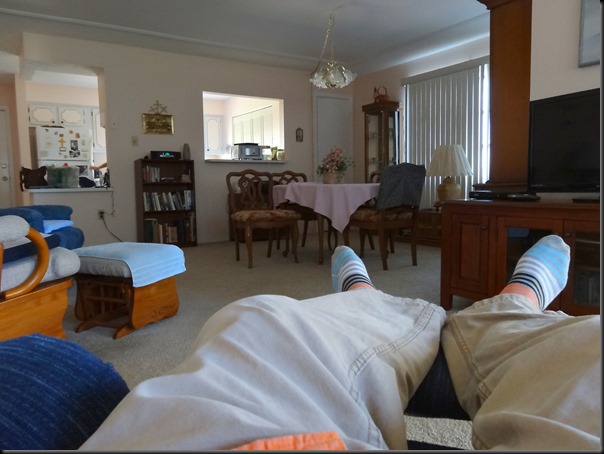 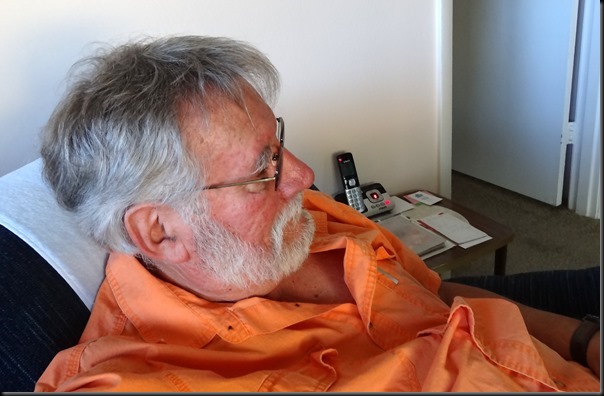 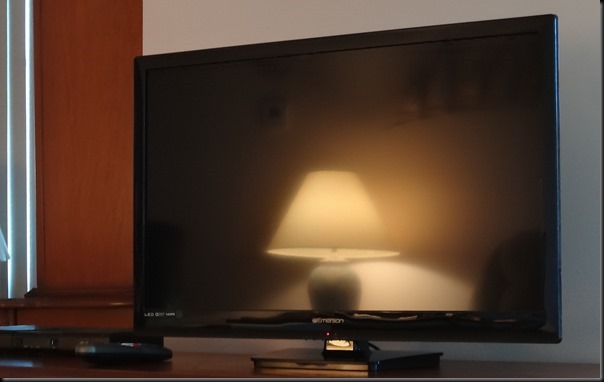 Gets so humid here in the night that in the morning everything is soaken wet.  Didn’t even have to pre-soak the Jeep before washing it because it was already wet.  Knowing the day would heat up fast we didn’t waste any time getting to the things that had to be done this morning.  Kelly had a big cleaning job in the rig and my priority was to get the Jeep washed and all cleaned up.  Wasn’t even 7:30 yet when we both got right at our tasks. 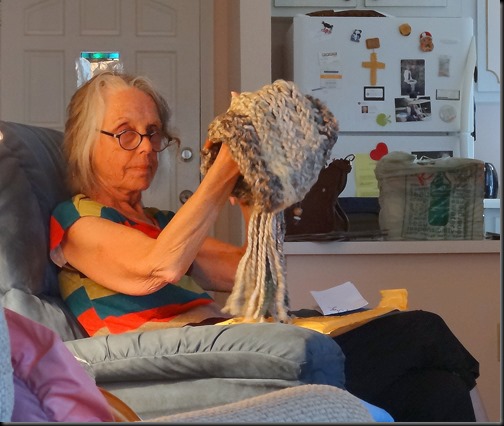 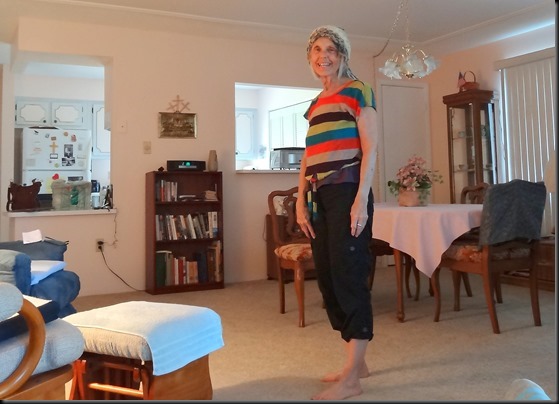 Over the years I have had a lot of various vehicles but I thought to myself this morning I have never had a vehicle that has ever gotten as dirty as both the Jeep and Motorhome are at the moment.  What a mess they were.  Nearly needed a wire brush to get all the accumulated road grime, desert dust and road salt off the Jeep.  Took me about an hour to finally step back satisfied the Sarasota Highway Dirt Patrol wouldn’t pull us over and impound the Jeep. 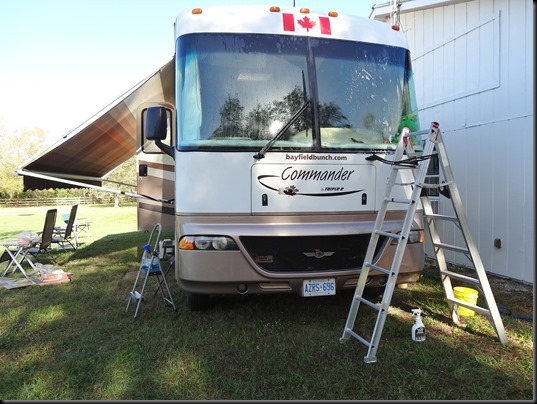 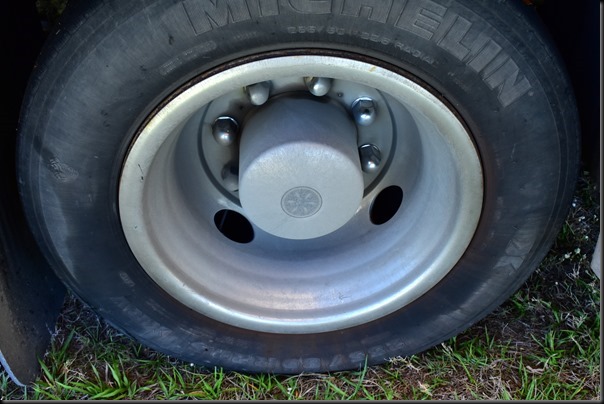 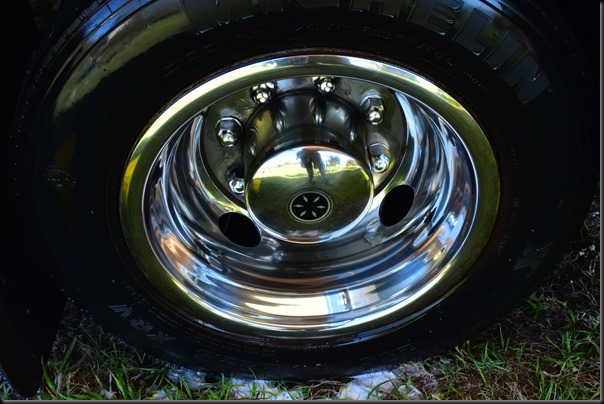 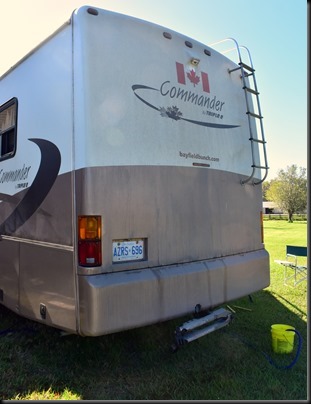 HMMM. WONDER IF I HAVE ENOUGH ENERGY TO DO THE BACK TOO

With morning temperatures on the rise I surprisingly had some energy left over so figured I would just wash the front of the Motorhome too.  Finishing the front I thought I’d at least get the chrome wheels cleaned up as well.  That done I considered doing the back which of course was the absolute dirtiest.  It was a race against the Sun now and I knew if the Sun got on me in this humidity I would be immediately turned into a 210 pound ball of sticky paste.  Half an hour later I had the back of the rig done.  Okay I’ll just slip around the corner to the rear end of the driver’s side and wash a quarter of that side then call it a day.  Another half hour or so later I had the whole driver’s side washed.  And that was it for me today.  My energy was gone and I was a hot sticky blob of gooey paste 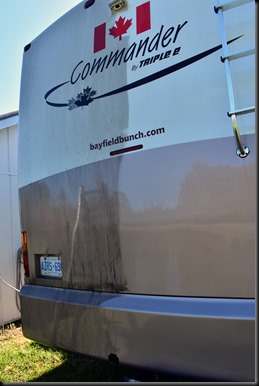 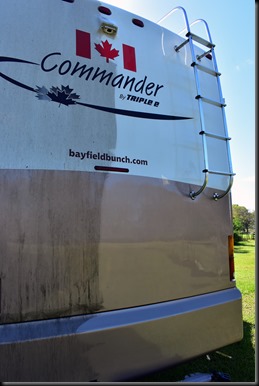 WELL AT LEAST I’VE GOT  HALF OF IT DONE 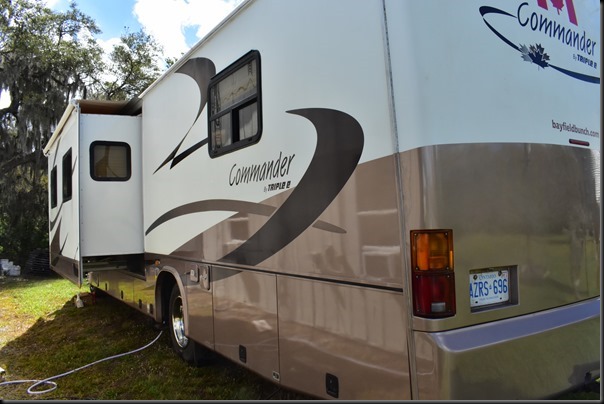 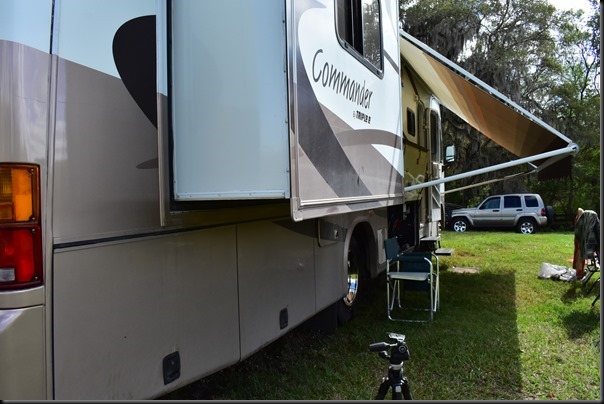 For me, showers are life saving so I was soon into the rig and under the shower nozzle.  Ten minutes later I emerged a new person once again ready to take on the trials and tribulations of another day.  Cranked up the A/C in the rig and I never stuck my head outside again until it was time to head on over to Aunt Jeans for supper.  How people can live in this heat I will never know.  We did see a fair number of RV’s heading north on I-75 Friday and somebody told us many folks can’t take the heat and are heading home to milder winter temperatures early. 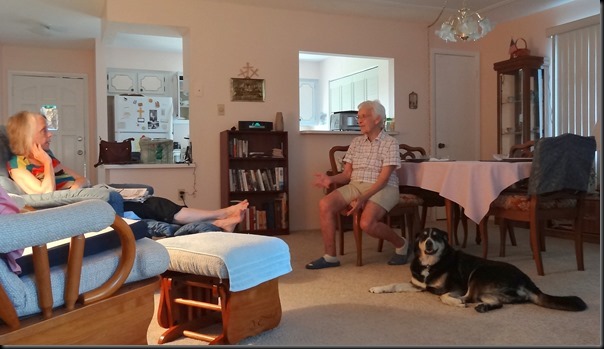 Had been nearly a year and a half since last driving to Jean’s from our present location so not trusting our memories to get us there through all the Sarasota traffic we programmed in Jean’s address and Garmin Gertie had us there 15 minutes later.  What a treat scooting through the traffic in our  little Jeep compared to lumbering along in traffic with the big old Motorhome towing the Jeep behind. 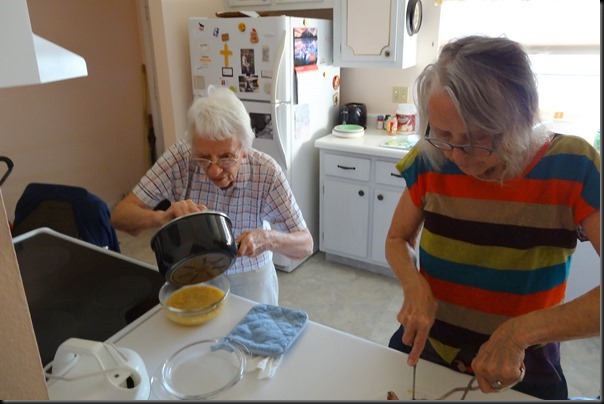 Pheebs remembered Aunt Jean’s front door and was the first one inside to greet Jean.  After our many weekly phone conversations over the past 16 months or so how great it was to finally see Aunt Jean her very self instead of only the voice on the phone.  And Jean was soooo happy to see the Pheebs again too.   We all had some catching up to do before Jean and Kelly fixed us up a yummy supper.  Cream corn and mashed potatoes with gravy are two of my favs and the pork tenderloin topped it all off.   And the lemon squares for dessert were just the best.  We’ll be over to Aunt Jeans Monday afternoon and from there we’ll head out to Miller's Ale House for supper Monday night. 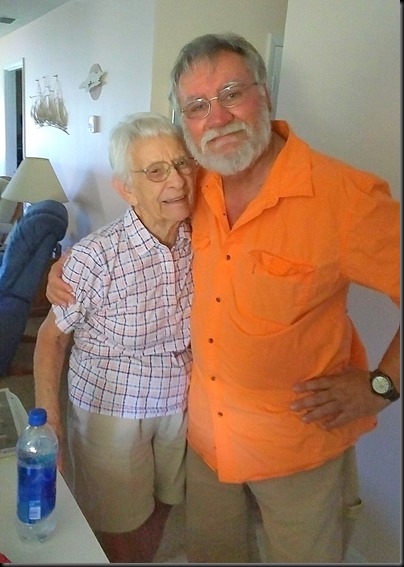 Our hosts Dave and JoAnn returned from Milwaukee late this afternoon and we met them and their son Zachery when we arrived back at the rig.  Nice folks these people. 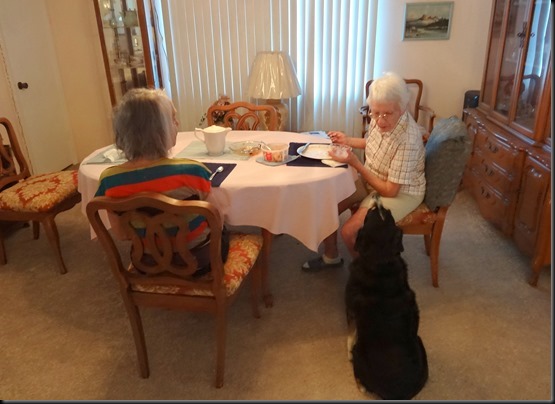 2. If you spray hair spray on dust bunnies and run over them with rollerblades, they can ignite.

3. A 3-year old's voice is louder than 200 adults in a crowded restaurant.

4. If you hook a dog leash over a ceiling fan, the motor is not strong enough to rotate a 42 pound boy wearing Batman underwear and a Superman cape. It is strong enough, however, if tied to a paint can, to spread paint on all four walls of a 20x20 ft. room.

5. You should not throw baseballs up when the ceiling fan is on. When using a ceiling fan as a bat, you have to throw the ball up a few times before you get a hit. A ceiling fan can hit a baseball a long way.

6. The glass in windows (even double-pane) doesn't stop a baseball hit by a ceiling fan.

7. When you hear the toilet flush and the words "uh oh," it's already too late.

8. Brake fluid mixed with Clorox makes smoke, and lots of it.

9. A six-year old can start a fire with a flint rock even though a 36-year old man says they can only do it in the movies.

10. Certain Legos will pass through the digestive tract of a 4-year old.

11. Play dough and microwave should not be used in the same sentence.

13. No matter how much Jell-O you put in a swimming pool you still can't walk on water.

15. VCR's do not eject PB&J sandwiches even though TV commercials show they do.

17. Marbles in gas tanks make lots of noise when driving.

18. You probably do not want to know what that odor is.

19. Always look in the oven before you turn it on. Plastic toys do not like ovens.

20. The fire department in Austin, TX has a 5-minute response time.

21. The spin cycle on the washing machine does not make earthworms dizzy.

23. Cats throw up twice their body weight when dizzy.

One day the first grade teacher was reading the story of the Three Little Pigs in her class. She came to the part of the story where the first pig was trying to accumulate the building materials for his home. She read, "...And so the pig went up to the man with the wheelbarrow full of straw and said, Pardon me sir, but may I have some of that straw to build my house?'" The teacher paused then asked the class, "And what do you think that man said?"  One little boy raised his hand and said, "I think he said...'Holy crap a talking pig!'"

25. 60% of men who read this will try mixing the Clorox and brake fluid.