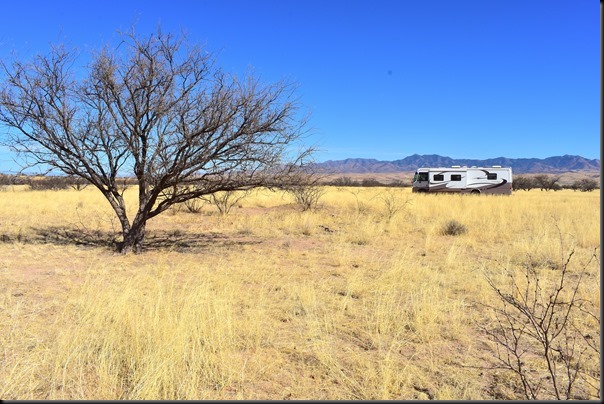 WHETSTONE MOUNTAINS ALONG THE SKY LINE

It was a brisk walk in much cooler air this morning and that told us our days would now finally be much more comfortable for us. 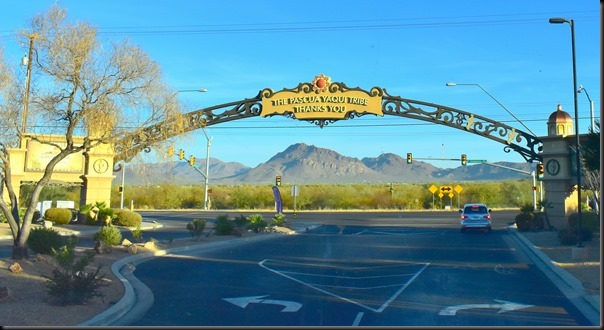 Nice quiet sunny Sunday morning as we rolled out of Casa Del Sol heading east on Vallencia Road to I-10 where we hung a right up the ramp and onto the Interstate.  We weren’t long in reaching highway 83 and angled off another ramp in a southerly direction.   Some may have guessed where we were headed and at 9:40 we pulled of the highway into the grasslands of Las Cienegas National Conservation Area.  We had been here nearly a year ago so we knew where we were going and luckily the same spot we were at late last February was empty.   We are about 35 miles North-West of Sierra Vista Arizona and not far from our old Winter stomping grounds in the first half dozen years of our travels. 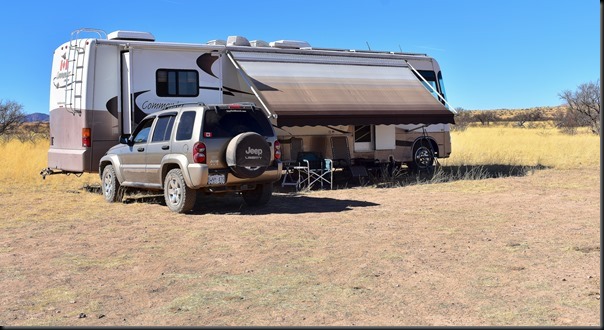 WE WERN’T LONG GETTING COMFORTABLE AT OUR OLD SPOT

We knew this high ground site had a great Verizon signal but no phone signal for our T-Mobile.  Didn’t take us long to get set up and how nice to feel comfortable again with a nice refreshingly cool breeze wafting it’s way through the coach.  This site in what we call ‘the grasslands’ and has views which travel one’s eyes 20 or 30 miles in any one direction.   It’s  also the home of many wandering Pronghorn Antelope.  With a bit of luck we will be seeing them again this year.  Did you know they are the second fastest land mammal in the world.  Only the Cheetah is faster but for shorter periods of time.  I had better dial in a higher shutter speed on my camera. NO THOSE ARE NOT PRONGHORN ANTELOPE….THEY ARE A SINGLE FIILE LINE OF BIG BLACK COWS AND PHEEBS IS KEEPING AN EYE ON THEM 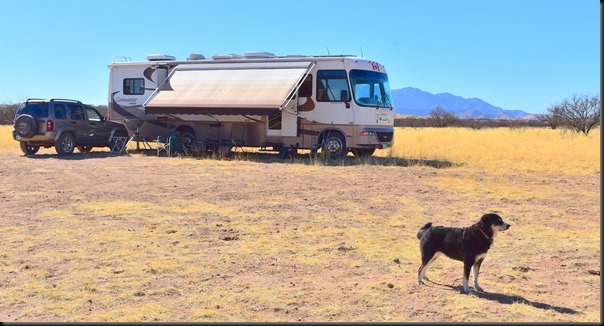 SANTA RITA MOUNTAINS IN THE BACKGROUND

Had ourselves a totally relaxing afternoon sitting outside under our awning enjoying panoramic views and idyllic weather.  Quite often after a long travel day we are sometimes pretty knocked out the following day and today was the ‘following day’.  A warm Sun with enough of a breeze to keep it from feeling like a hot Sun.  We are very fortunate to be here with no road sounds, trains, or planes.  A few other RV’ers scattered about in the far off distance.  Yes ‘fortunate’ is definitely the key word here for us today……………. 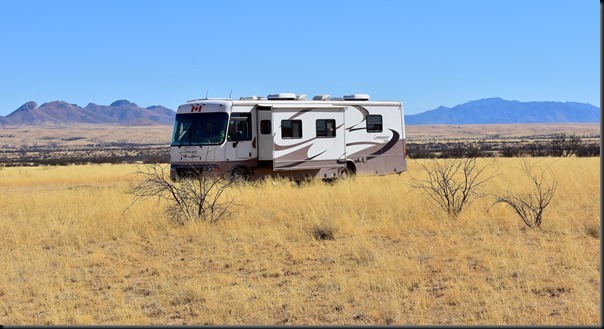 MUSTANG MOUNTAINS TO OUR SOUTH-EAST 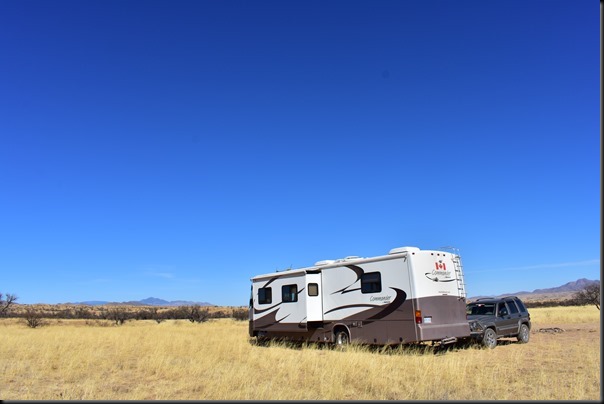 SUNSET ‘ON’ THE WHETSTONE MOUNTAINS

PARTIAL SUNSET ‘ON’ THE HUACHUCA MOUNTAINS

SUNSET ‘ON’ THE MUSTANG MOUNTAINS

GROANER’S CORNER:))  Two lawyers were in a coffee shop talking. One of the lawyers names was Thomas Strange. After a while their conversation became rather morbid, and they started to started to talk about what they were going to have on their tomb stones. Thomas said the he wasn't going to have his name put on his tomb stone, instead he was going have "Here lies the body of an honest lawyer!!!" "Why are you going to have that?"asked his friend. "Well", said Thomas, "When people are walking through the cemetery, and they see...Here lies the body of an honest lawyer. They will say "Oh...That's Strange".

You know you are in a Texas church when::

People grumble about Noah letting coyotes on the ark.

The preacher says, "I'd like to ask Bubba to help take up the offering" and five guys stand up.

The restrooms are outside.

Opening day of deer season is recognized as an official church holiday.

A member of the church requests to be buried in his 4-wheel-drive truck because "It ain't never been in a hole it couldn't get out of."

When it rains, everyone is smiling.

Prayers regarding the weather are standard practice.

The choir group is known as the "OK Chorale".

Four generations of the same family sit together in worship.

There is no such thing as a "secret" sin.

Baptism is referred to as "branding".

There is a special fund raiser for a new septic tank.

High notes on the organ can set the dogs to howling.

People wonder, when Jesus fed 5000 whether the two fish were bass or catfish.

People think "rapture" is when you lift something too heavy.

The final words of the benediction are, "Ya'll come back now, ya hear?"