Majority of today’s photos were all taken right around sunrise this morning.  What a fine way to start a very relaxing day spent lounging around the rig.  And I may add all the sunrise photos were done while rustling about outside in my blue and gold Gummy Bear pajamas and floppy old green housecoat.  Oh, and cheapo falling apart Walmart sneakers.  No, being anywhere around our rig around sunrise is nowhere anyone really wants to be. 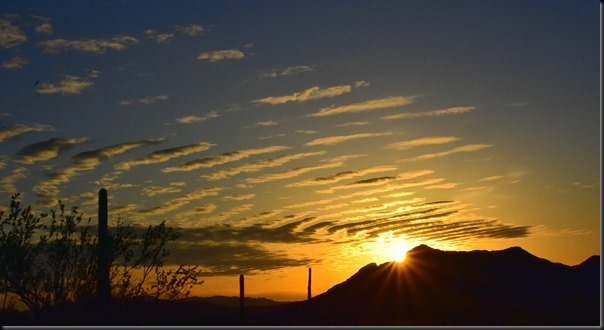 We first boon-docked here along Darby Well Road as far back as 2008.  This area was love at first sight for us of course and it still is today.  Except for the years we had our Congress house we have repeatedly returned here to revel in the peace and quiet of the surrounding desert beauty.  Instead of mountains far off on distant horizons we have them so close by we can almost reach out and touch each one and that has always been one of the big attractions here at Darby Well.  That and the fact we are in the Sonoran Desert which I consider to be the prettiest  of all deserts.  Everywhere one looks one sees the color green and that is what makes the Sonoran desert so very special.  With any luck maybe some of my photographs over the next little while will show that and convey the feelings we have about where we are. 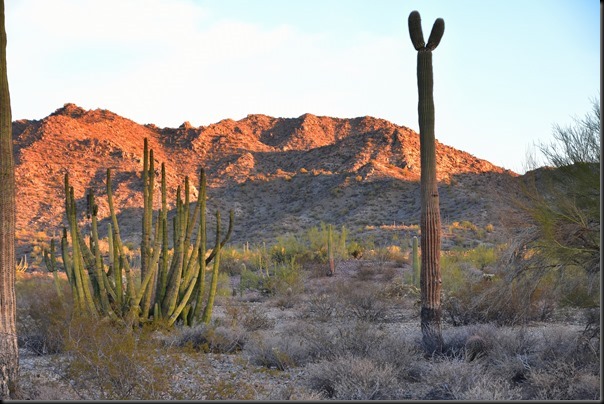 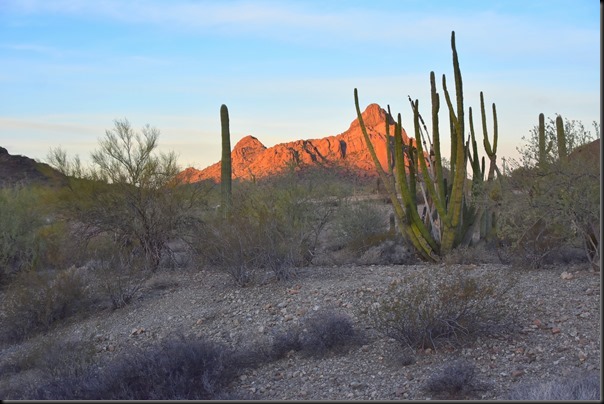 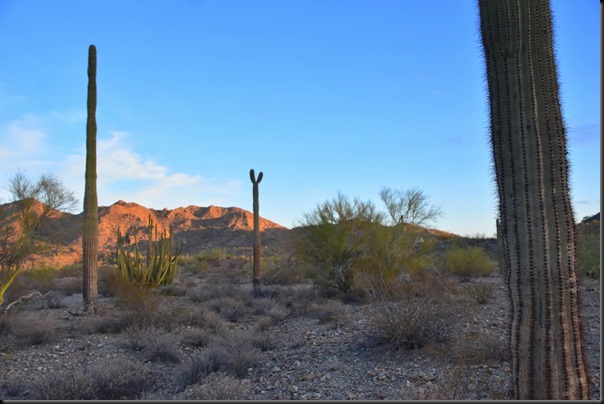 From our location we can set out and walk in any direction we like and this morning we chose to walk on Darby Well road itself.  My favorite though is to head off across the rocks and gravely sand of the natural desert floor following nearby arroyos or scrambling and clambering over or through tumbled boulders.  It ‘s all here at Darby Well as are the endless Jeep roads leading to all kinds of fascinating places. Hopefully we  can get us in some real good bumpity morning Jeep scrambles. 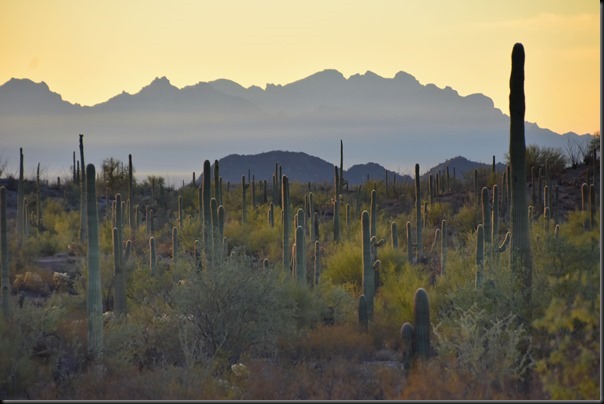 THOSE ARE THE AJO MOUNTAINS ON THE FAR DISTANT HORIZON 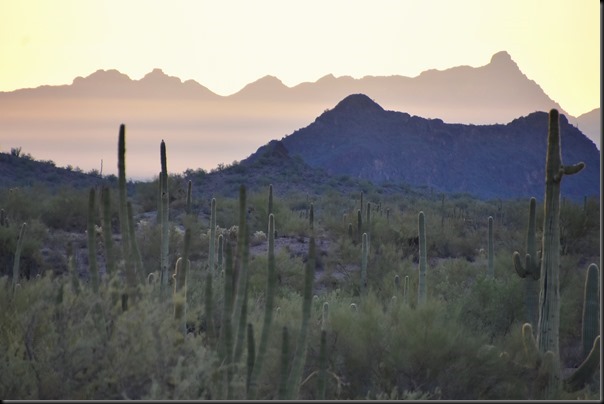 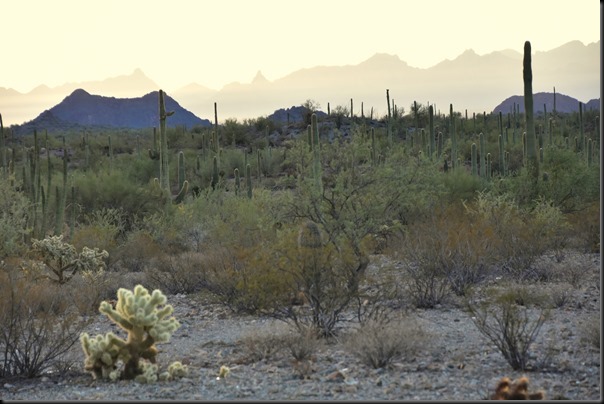 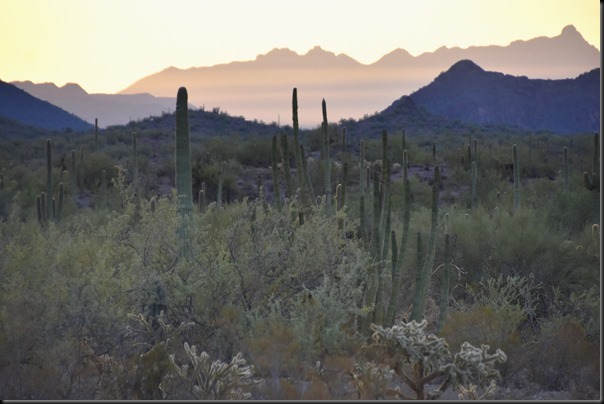 It’s been nearly a year since we last set up our Shaw TV satellite dish so this morning we thought we’d give it a whirl.  Imagine how surprised we were when after setting up the dish and searching for the satellite it all came together and worked without too much of an effort on our part at all.  Even the television programming stuff came off almost without a hitch.  Will wonders never cease.  Of course the downside when we turned it on was all all the same old-same old extremely nauseating stupidly annoying TV commercials again.  So glad when Kelly finally snapped it off and we got back to our relaxing Sirius Satellite Radio music channel 068 ‘The Spa’.  Now that Kelly can watch her shows at night again I will be back to living in my Sony stereo headphones with the volume up.  But that’s Okay, I’m a music buff and I enjoy wandering off down memory lane and getting myself totally lost in my headphones. 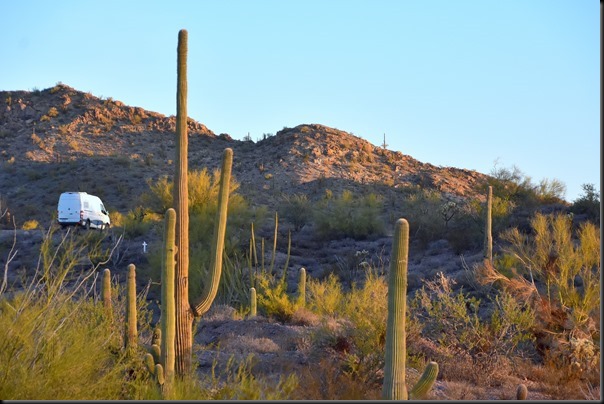 OUR CLOSEST VISIBLE NEIGHBOR ABOUT A QUARTER MILE AWAY

It was so warm overnight we didn’t even need any heat on and with the morning’s sun up over the horizon temperatures began climbing.  Setting up the satellite dish and putting our awning down I was plenty warm but luckily a high thin cloud cover moved into the area and for me that  cooler air was a welcome break. 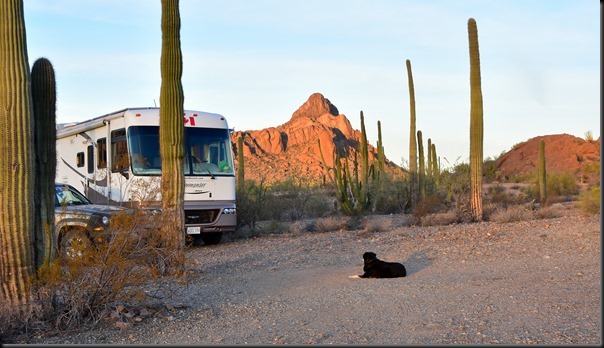 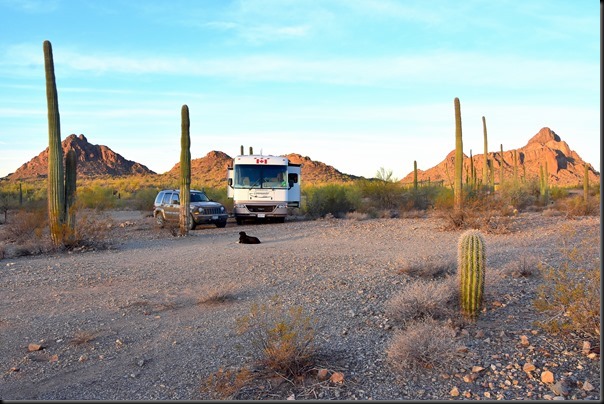 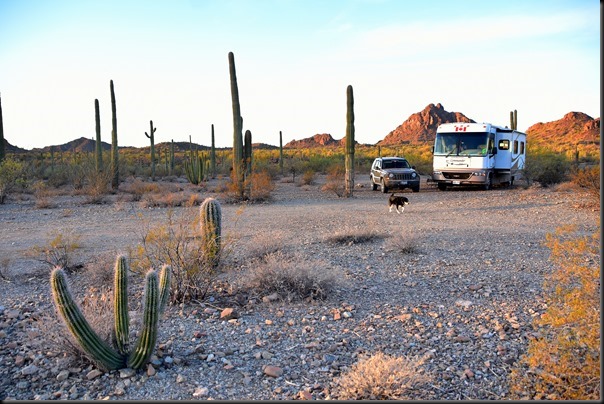 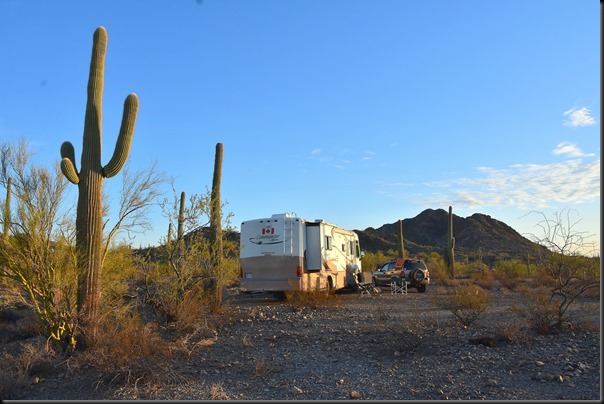 I was outside under the awning tipped back in my lounge chair contemplating the unlikely future of a pesky fly when I heard tires approaching on the desert’s rocky surface.  Confused as to which direction the sound was coming from I heard a car door and before I figured it all out a fellow walked around the end of our Jeep.  My thoughts are always the same in circumstances like this.  Oh-Oh friend or foe.  Well luckily as has always been the case it was friend and that is how I got to meet Peter from Ottawa Ontario, one of our blog readers and occasional commenters for the past few years.  Nice chap with an easy going manner.  He was out Jeeping the area with another couple and popped in to bid us a quick Hello.   Peter and his friends are currently camped out at Coyote Howls East in Why Arizona.  Like us, Peter is a dyed in the wool great American Southwest Canadian Snow Bird.  Thanks for being a reader and commenter Peter and thanks for dropping by. 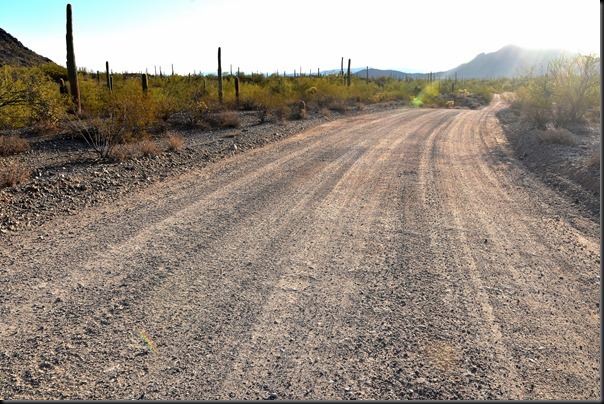 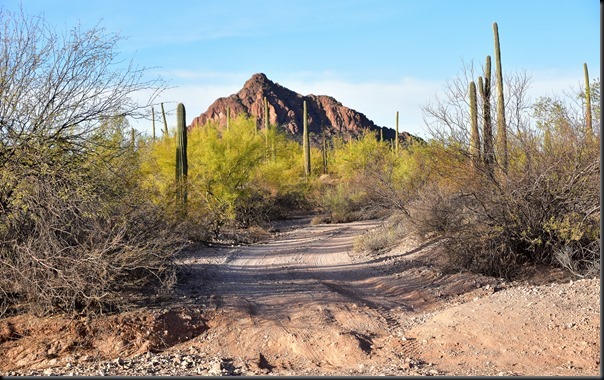 A JEEP ROAD LEADS OFF INTO THE DESERT’S WILDS 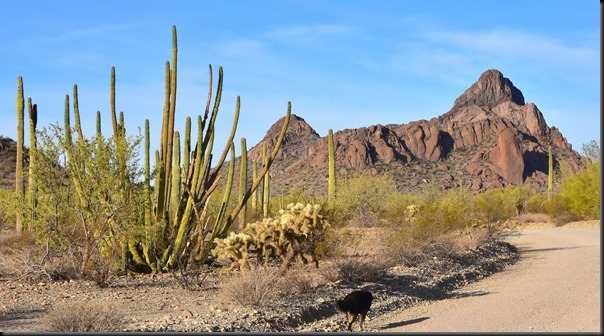 THERES A PHEEBS IN THIS PHOTO 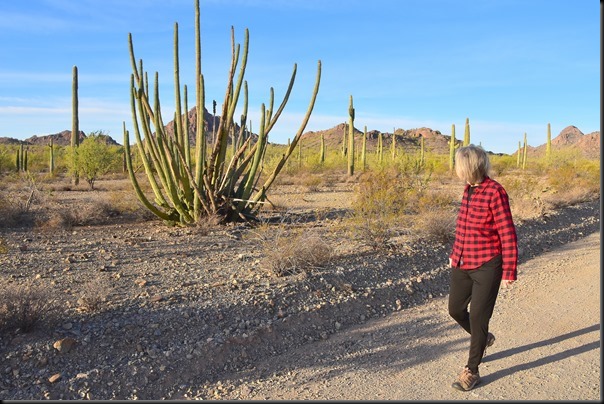 Sat outside under the awning reading for awhile and that’s fhe first time I’ve done that this year.  How nice to be reading along and glance up over my kindle and see Saguaros, Ocotillo, Organ Pipes, green barked Palo Verde trees, Creosote bushes, Teddy Bear and Fruit Chain Chollas and Barrel Cactus back grounded by mountain ranges to the south.  I will sure miss all this someday. 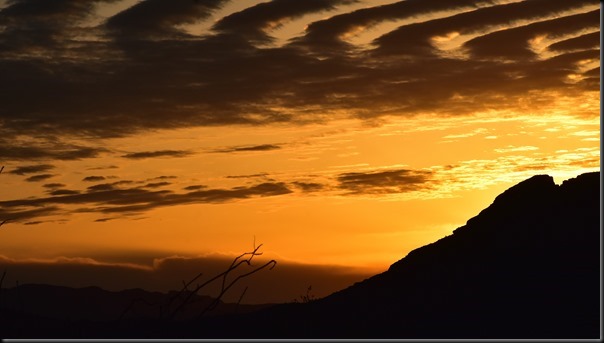 GROANER’S CORNER:((  A businessman on his deathbed called his friend and said, "Bill, I want you to promise me that when I die you will have my remains cremated."
"And what," his friend asked, "do you want me to do with your ashes?"  The businessman said, "Just put them in an envelope and mail them to the Internal Revenue Service. Write on the envelope, "Now, you have everything."

"The eight Saddam body doubles are gathered in one of the bunkers in downtown Baghdad. Tariq Aziz, the deputy prime minister, comes in and says, 'I have some good news and some bad news.' They ask for the good news first.
"Aziz says, 'The good news is that Saddam is still alive, so you all still have jobs.'
"And the bad news?" they ask.
Aziz replies, 'He's lost an arm.'" 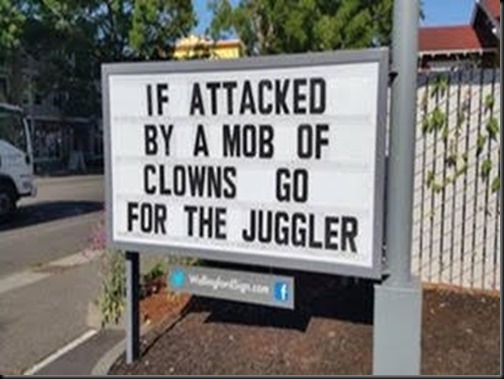