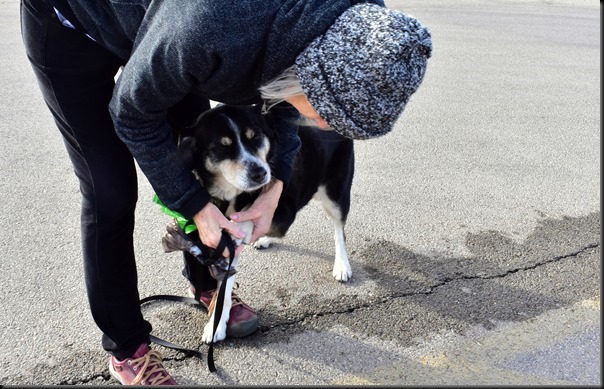 I noticed when I stepped out with Pheebs about 5 this morning the air was not as icy cold as it had been the previous four mornings.  Our weather site said we were at 39F and that above freezing temperature was just fine with me considering what it has been.  However, it didn’t last long:(( 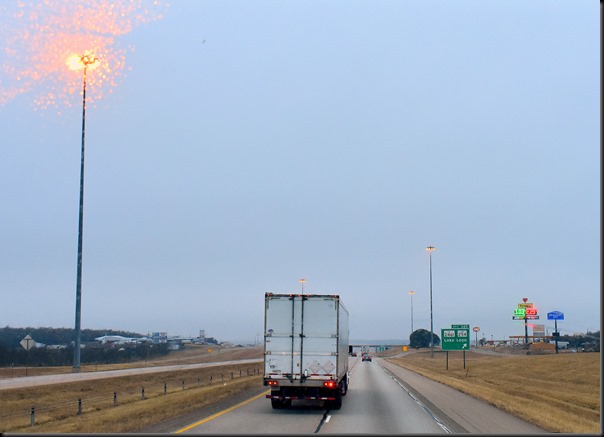 IT WAS A MISTY RAIN DRIZZLE WE DROVE IN TODAY

Before we left Weatherford Kelly slipped into Walmart first thing and picked up a few groceries.  It was 7:45 when we wheeled ourselves out of the parking lot and up onto I-20 West a short distance away.  Had us a heavy overcast but roads were good and traffic was moderate.  Wasn’t long though before the clouds were on the deck and we had us a foggy drizzle going on and that lasted for a couple hours. No matter, we were both very glad we had put Dallas behind us Monday.  Had we thought to update our old GPS with all the new I-30 traffic route changes in the last bunch of years it would not have been as confusingly stressful for us.

HEY IS THAT SNOW!!  NOPE, IT’S A COTTON FIELD

We were both feeling the need for a Cracker Barrel breakfast so we sauntered ourselves on down to Abilene and had us some eggs and fixins.  Will probably be awhile before we hit another Cracker Barrell now that we are this far west.  We are right on the edge of being where we really want to be and that will pretty much be the end of overnight Walmarts, Cracker Barrels, Interstates, etc.  We are only a couple days away from the tranquil deserts and mountains we truly love.  Our beloved winter home for going on the past dozen years:)) 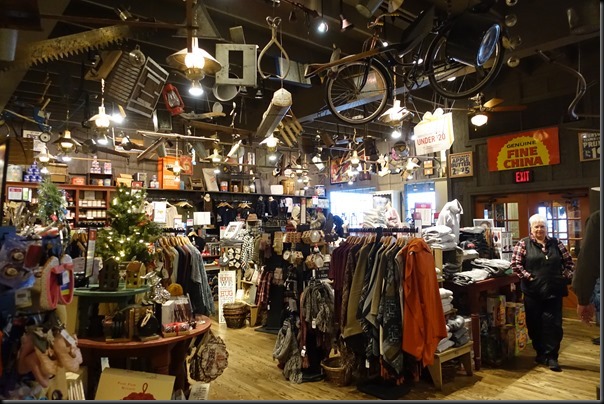 YES WE DO LOVE OUR CRACKER BARRELS ALRIGHT 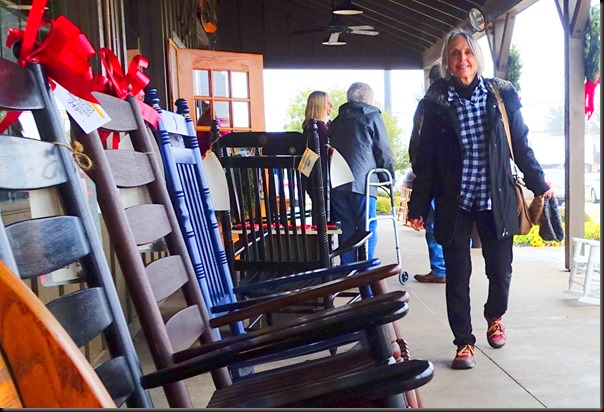 Heading west out of Abilene the dull drizzle continued and it wasn’t long until my driver’s side windshield wiper wasn’t clearing the rain off the windshield.  I was convinced we needed a new wiper blade.  After a bit we pulled into a rest area and Kelly got and gave the wiper a snap.  We were both surprised to see a few small chunks of ice fall off.  The weather was wet, cold, and windy and a thin layer of ice had formed on the front of the Motorhome.  Only thing i could figure is we must have gained some altitude east of Colorado City.  Kelly checked her computer for the area and it said it was 30 Fahrenheit where we were.  Throw a wind chill factor on top of that and you know it was cold.  At a gas stop in Oil Springs later I could see my breath. 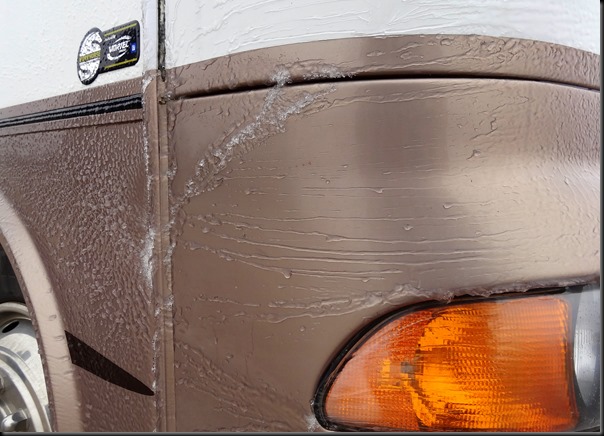 PICKED US UP A THIN COATING OF ICE on the rig

We didn’t especially want to Walmart ourselves for a third night in a row but we figured it was the most convenient thing for us to do before we slip through the mountains north of El Paso.  We’ve done El Paso 3 or 4 times going both ways years ago and it’s something we have any intentions of doing again.  Years ago we used to head west out of Roswell NM and slip over the Apache Pass and down the other side into Tularosa and Alamogordo.  That’s a nice way to go by the way.  We’re going to try a different route further south this time and as usual once we come down out of the Franklin Mountains our travels will slow down and our Southwest journey will truly begin. 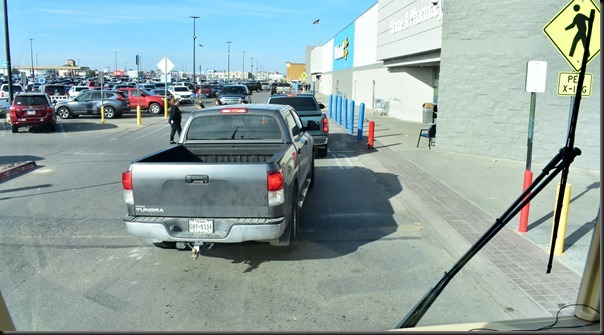 GOT OURSELVES TANGLED UP IN A MANIC JAM PACKED WALMART PARKING LOT IN MIDLAND  TEXAS AND HAD TO DO US SOME FANCY SHUFFLING TO GET THE BIG EEE AND LIBBY AROUND ALL THE CARS THERE….I THINK WE SCARED THE PAINT RIGHT OFF A FEW OF THEM 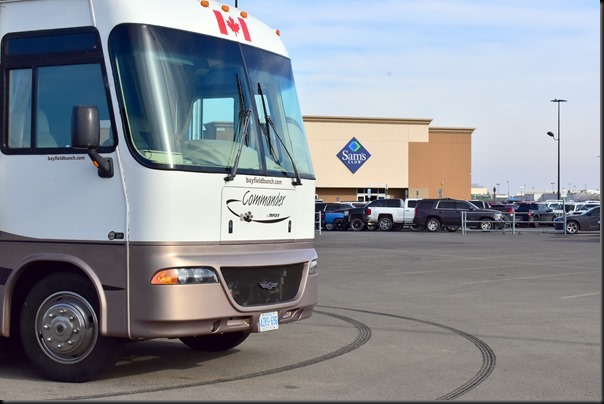 It’s always such a grind  traveling between South-Western Ontario Canada and the great South-Western States of America and it’s never a favorite thing of ours but it has to be done to reach our destination.  In our early travel years we used to get off the Interstates and travel secondary roads.  We’ve been lost in the Ozarks north of Fort Smith and have temporarily misplaced ourselves on secondary roads way too often.   And we’ve had a few encounters with low overpasses on back roads as well.  I too once pooh-poohed the Interstates years ago but I don’t anymore.  They provide the quickest and cheapest way for us to travel between our home in Bayfield Ontario and the Southwestern United States.  And especially this time of year when weather is so unpredicable, cold, and treacherous.  Any northern traveler with a lick of sense is gonna get themselves as far south as fast as they can in the winter months.  No back roads, no dawdling or leisurely sightseeing, just get as far south into the warmer air as possible.  Thank heavens we have the Interstates that we do.  Can you imagine the total gridlock traffic crises we would have nowadays if we didn’t have the Interstates.  Good for Dwight D Eisenhower in foreseeing the future travel needs of the North American people.  He must have been an RV’er at heart. 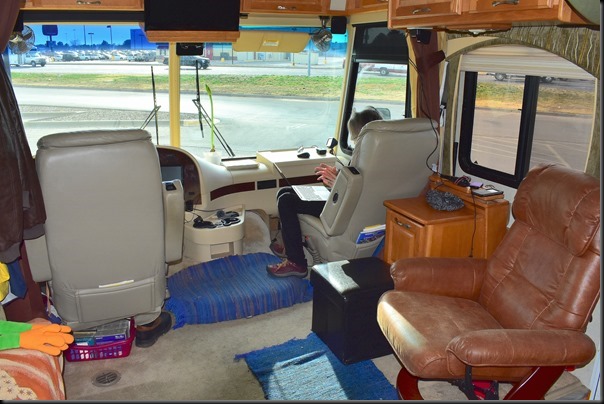 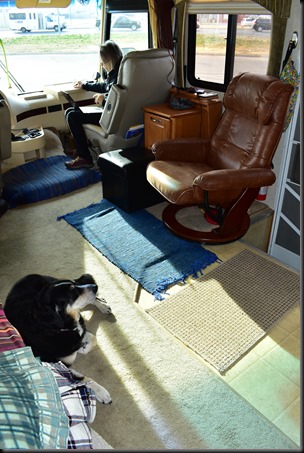 For a fellow who rarely gets a cold I have myself a doozer at the moment.  My head cold started a couple days ago and I must have picked it up from Kelly.  At least it’s not in my chest making me cough all the time but it sure has altered my voice making me sound like Lou Rawls. 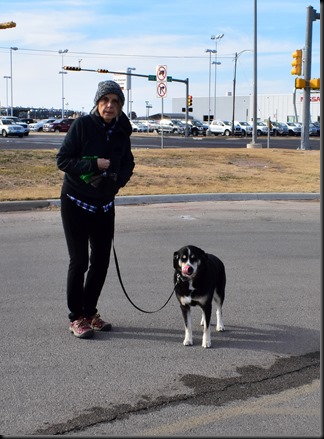 I asked my wife why there were so many dings on the driver's side of her Mercedes and she said the brakes must be bad on that side.