VAN HORN TEXAS TO COLUMBUS NEW MEXICO:: WE ARE AT LAST HAPPY ‘AND WARM’ CAMPERS:)) 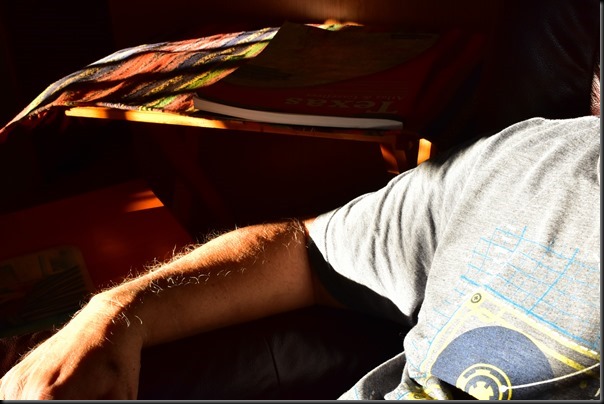 RELAXING IN MY RECLINER SOAKING UP NEW MEXICO’S WONDERFUL WARM AIR AND SUNSHINE
Stepping out with Pheebs Wednesday night I instinctively looked skywards and found myself looking right at the constellation Orion.  It’s my Aunt Jean’s favorite one and I right away thought of her.  Despite the light pollution where we were and a bright half Moon I was able to make out a few other stars and sensed the night sky was free of clouds.  Same thing when Pheebs and I slipped outside about 6 this morning.  Yes indeed we were finally back to America’s  great Southwest with it’s big starry night skies and sun drenched days. 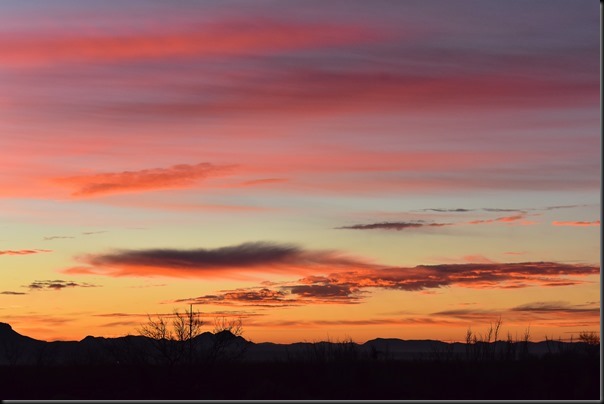 I think for the first time since leaving Ontario we had an overnight temperature above freezing at 33F.  Despite the 50+ trucks in this large dirt parking area behind McDonalds in Van Horn none of them were too close to us and we didn’t find them a bother.

With Thursday morning’s early sun peeping over the eastern horizon tickling Van Horn’s Texas roof tops we finally made our way out of the truck parking lot over to I-20 about a quarter mile away and resumed our Westward-Ho travels slightly on the east side of 8 o’clock.  Less than 10 minutes later we entered the Mountain Time Zone constituting another time change and we moved back another hour in time putting us 2 hours behind Bayfield Ontario.

WE HAVE ALWAYS LOVED THE LONG SWEEPING VISTAS FOUND MOST EVERYWHERE IN THIS LAND
No idea how far or where we would go today but we were secure in the knowledge wherever it was it was only going to be warmer than where we had been.  Looking at the weather back home in our Bayfield Ontario area we see that we escaped the brutally cold  record breaking winter temperatures and loads of snow just in the tiniest nick of time.  We are so lucky we decided to leave when we did and both agreed we would never ever want to make another winter departure again!!  We already have some changing thoughts on next winter’s destination.

What an absolutely beautiful morning we had going for us.  Clear blue skies with morning’s sunshine casting long fingery shadows into distant mountain canyons.  Sweeping valleys between mountain ranges stretch for about as far as one can see.  And as is typical with many southwest stretches of Interstates I-10’s traffic was moderate.  What an absolute joy to be in this kind of country again and with sunny skies and warm temperatures to boot.

WE’LL SOON SKIRTING THROUGH THE LOWER SOUTHERN END OF OF THOSE MOUNTAINS NORTH OF EL PASO
The city of El Paso Texas begins about 20 miles east of the downtown core and luckily we only had about 5 miles of it’s sprawl before we reached our interchange leading onto the #375 bi-pass.  It’s quite a high flying wing-over ramp off I-10 onto 375 and you might get the feeling you are in an airplane as the single lane fly-over carries you over roads below.  We followed Howard's directions to a T and found his suggested additional alternate route to the 375 alternate route worked perfect.  We had no problems whatsoever and we couldn’t believe how fast and easy it was getting back on I-10 north of El Paso on our way to Las Cruces.  If someone asked me what I thought of Howard’s route I would say, WOW, WOW, and Triple WOW:))  Why anyone knowing about this shortcut around El Paso would still drive through El Paso I don’t know.  We have done El Paso several times years ago both ways and you don’t want to do that if you don’t have too.

SLIPPING AROUND ON THE 375 BI-PASS WE CRUISE PAST THE NORTHWESTERN EDGE OF THE U.S. ARMY’S FORT BLISS

LOTS OF ARMY VEHICLES IN THERE
About half way through the alternate route we crossed into New Mexico and as soon as we came down out of the Anthony Pass and landed back on I-10 I turned and said to Kelly, ‘we’re home’.  Down came my side window as we welcomed New Mexico’s much warmer air.  We were finally on familiar turf and there was no need for any GPS or map stuff.  I-10 curves around the south end of Las Cruces New Mexico and heads west.  Las Cruces is probably one of the easiest cities to swing by on it’s bi-pass. 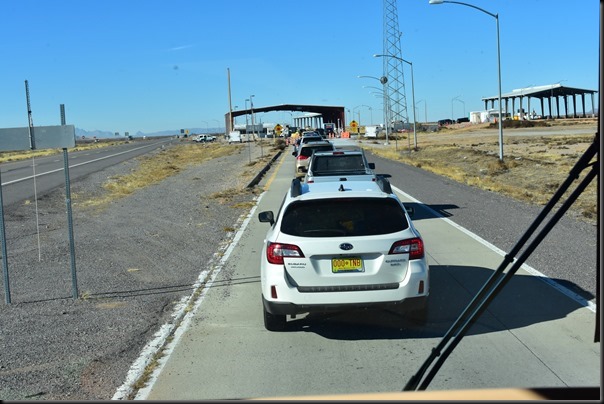 OUR FIRST BORDER PATROL CHECK-POINT OF THE SEASON 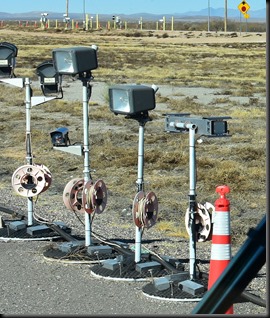 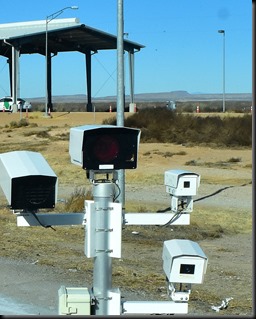 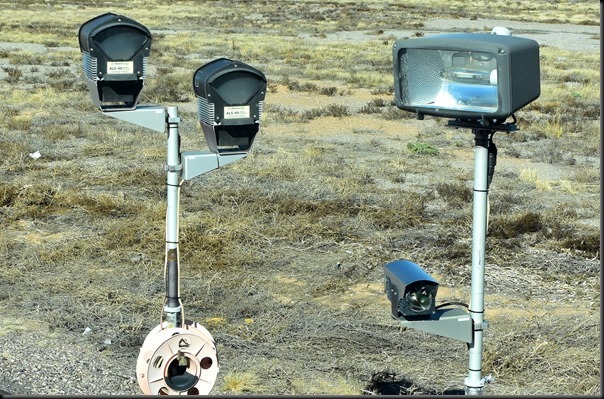 Sunshine beaming in my driver’s side windshield made the Big EEE’s black steering wheel hot to the touch.  It was about half way between Las Cruces and Deming NM that we both experienced a great wave of relief in the realization that our fast 6 day trip from Ontario was over.  We had reached our destination and it was time to slow everything down and get ourselves off the Interstates.  They had once again served their purpose well.  We kicked around a few places to go and decided on Columbus New Mexico right down on the Mexican border south of Deming.  We had been there 3 times before and knew it to be a perfect place to relax and de-stress for a few days.  There’s definitely no hustle and bustle in tiny Columbus.

NEAR LAS CRUCES THIS BIG 18 WHEELER DIDN’T HAVE ENOUGH POWER TO GET UP ONE OF THE LONG GRADES SO I HAD TO HOOK ONTO HIM AND TOW HIM UP…..YA RIGHT):)
We exited I-10 into Deming and headed to McDonalds for a coffee.  Lots of memories in Deming from years ago.  Stepped out of the coach and revelled in the sun’s warmth.  Our second Deming stop was Walmart where Kelly slipped in for a few groceries while Pheebs and I had ourselves a walk around the parking lot.  Spotted a small Class A Thor Motorhome that really caught my fancy so took a few photos of it.  Didn’t know the people were inside watching but as soon as Pheebs and went back to our Motorhome the Thor driver saw that we were fellow RV’ers from Ontario and came on over.  Nice chap with an English accent and we had ourselves quite a chin wag.  His wife later walked over as well.  They were from St. Catherines Ontario and were on their way to the Baja in California. 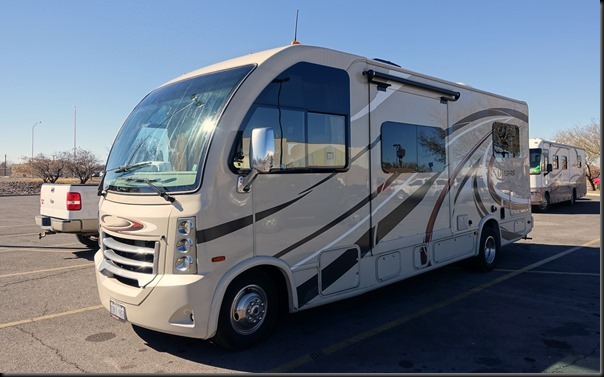 I LIKED THESE FOLKS COMPACT CLASS A MOTORHOME 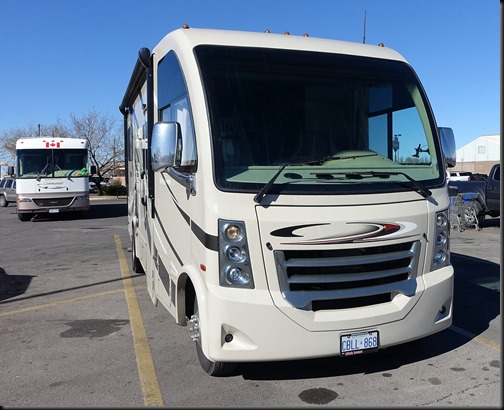 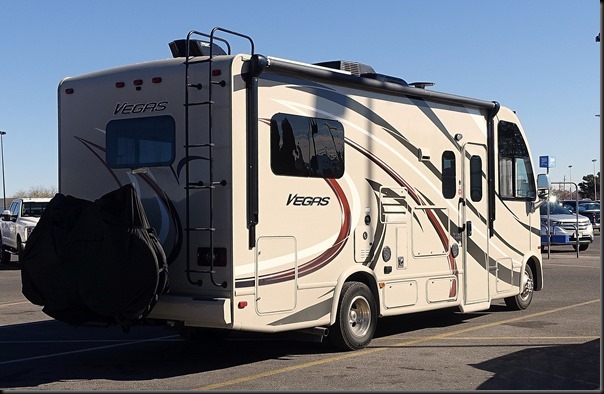 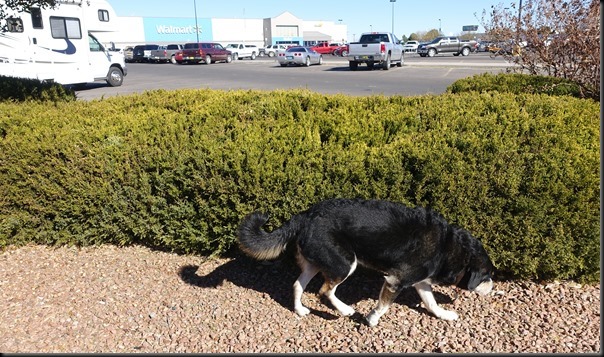 YOU CAN ALWAYS TELL YOU ARE IN THE SOUTHWEST BY THE NUMBER OF FEET YOU SEE STICKING OUT OF PICK-UP TRUCK WINDOWS
From Deming we headed south about 30 miles to Columbus and did you know that the only time the United States has ever been invaded by a foreign country was right here in Columbus.  The bullet holes are still in some of the buildings.  I have posts from our visits to Columbus New Mexico dating back to December of 2006 when we had Christmas dinner with many of the local folks in their community Center.  I have photos of both Kelly and I sitting on Santa’s knee.  Not at the same time of course.  First 2 times in Columbus we stayed at Pancho Villa State Park and the last time here was a Halloween night but we stayed in a different RV Park at the towns north end.  And that is where we are now.  It wouldn’t be an RV Park for most of the fellow RV’ers we know but for us Bayfield Bums we like it here.  But then again we like Slab City too.  We have water and sewer but no electric because we don’t need it.  Nine dollars a night.

ON OUR WAY TO COLUMBUS WE PASSED BY THE ‘3 SISTERS’ MOUNTAINS….LOOKS MORE TO ME LIKE 3 SISTERS AND A YOUNGER COUSIN
Soon as we got parked I un-hooked the Jeep then with hose in hand proceeded to hose all that corrosive road salt off both the Jeep and the Motorhome.  I didn’t wash them both, just hosed them down.  They are both still dirty but look a darn sight better than they did.  Also went around and oiled all the bin door locks and mechanisms.  That road salt will corrode those bin door latches in no time.  Also filled our fresh water tank and cleaned all the gunk off our hitch assembly.  So to sum it all up, we are happy campers tonight and so glad to be where we finally are.  Once we get some laundry out of the way in the morning maybe we’ll just go bomb around town in the Jeep for awhile.  Maybe go look for a dusty old Jeep road to let Libby kick her heels up a bit.  D’ya think:)) 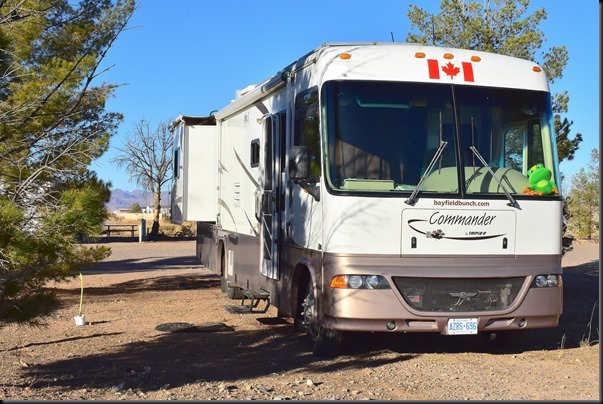 WE’LL PROBABLY HANG OUT HERE FOR A FEW DAYS 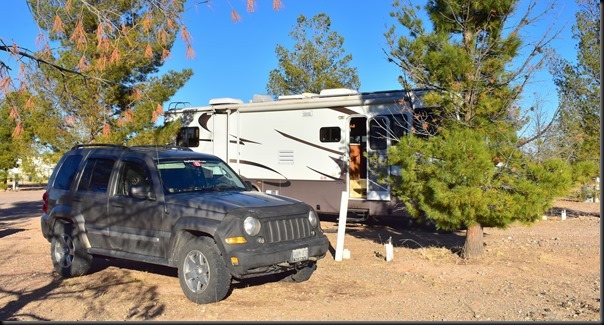 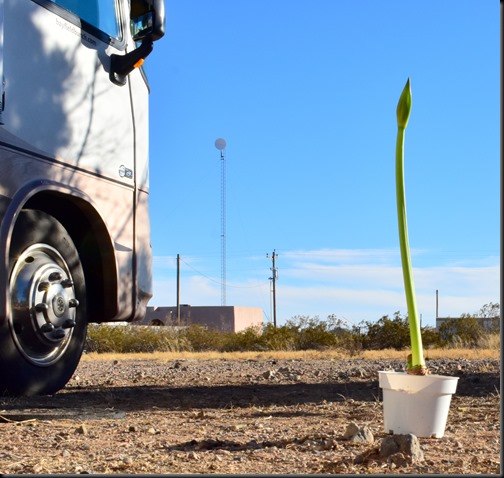 TOOK OUR AMARYLLIS FOR A WALK IN THE SUN THIS AFTERNOON 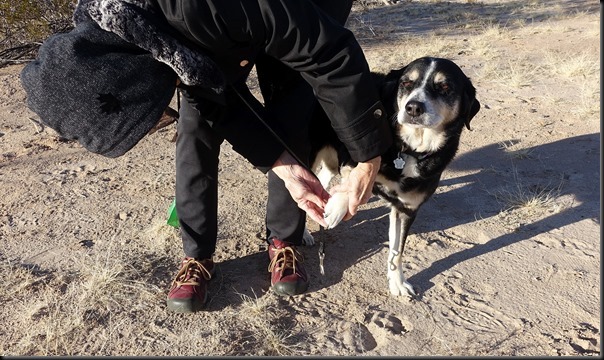 POOR PHEEBS, WE’RE BACK IN THE LAND OF GOAT HEAD STICKERS AND THESE DAMN THINGS ARE THE WORST THERE IS FOR BOTH ANIMALS AND PEOPLE 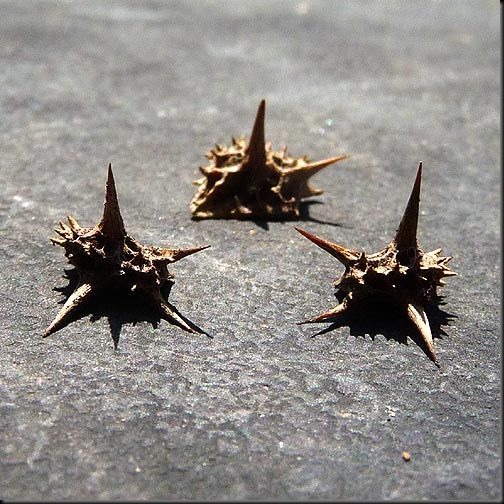 INTERNET PHOTO OF GOAT HEAD STICKERS
And my doozer of a cold has pretty much dozed itself out so I’m hoping I will be good for another decade before I get another one.  Kelly has been doing well but we both have been ending our days on the very tired side this past week.  Glad those fast paced travel days are behind us now for awhile………

A COLUMBUS NEW MEXICO SUNSET
GROANER’S CORNER:((  A man and his wife were driving their Recreational Vehicle across the country and were nearing a town spelled Kissimee. They noted the strange spelling and tried to figure how to pronounce it - KISS-a-me; kis-A-me; kis-a-ME. They grew more perplexed as they drove into the town.  Since they were hungry, they pulled into a place to get something to eat. At the counter, the man said to the waitress:
"My wife and I can't seem to be able to figure out how to pronounce this place. Will you tell me where we are and say it very slowly so that I can understand."  The waitress looked at him and said: "Buuurrrgerrr Kiiiinnnng."
-------------------------------------
Mr. Anderson: I am very lucky. When I talk with my wife, she always bows her head.
Mr. Smith: Why?
Mr. Anderson: Because she is taller than me.
==========================