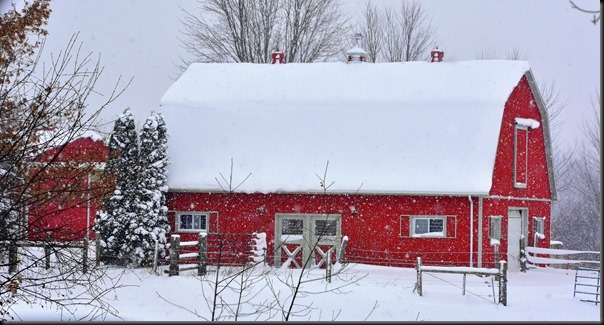 IT WAS A COLD SNOWY MORNING FOR A JEEP RIDE

Luckily we didn't receive any more snow overnight so I was able to take a temporary break from my snow shovel.  It was about 7:20 when I fired up the Motorhome and Jeep.  Ten minutes later I was in the rig on my way to the Bayfield Garage with Kelly and Pheebs following in the Jeep.  Having the Motorhome serviced was another necessary step prior to our departure a week from Saturday.  Dropping the Motorhome off we headed back home where I picked up my camera before Pheebs and I headed off out into the snowy countryside. 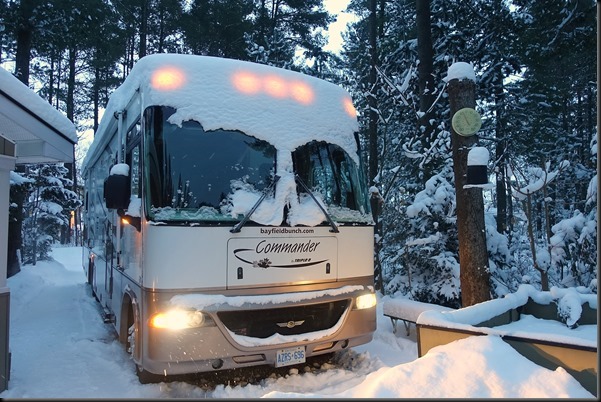 WARMING UP THE BIG EEE EARLY THIS MORNING 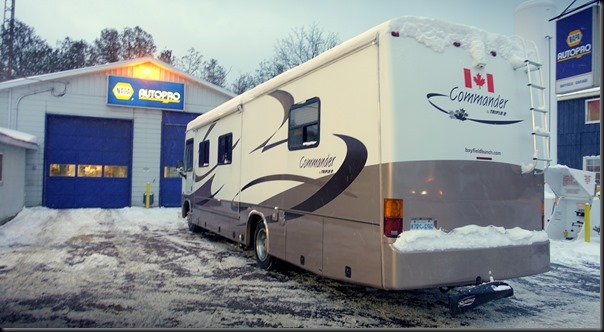 AT THE BAYFIELD GARAGE

Snow began falling but luckily winds for the most part weren’t too bad and we only encountered a few light snow squalls.  Grabbing a coffee and muffin to go at Tim Hortons in Clinton we headed out on the areas snowy roads.  With the snowfall heavy at times we made our way slowly around the countryside and found us a few photos.  I’m impressed with winter’s beauty out there even on overcast days but the real magic of the landscape needs blue skies and sunshine to turn it into a photographic Winter wonderland.  I hope we get at least one sunny day out of the next seven.  And I must say again how totally impressed I am with the Jeep’s 4 wheel drive on snowy roads.  In fact I slipped it into 4 wheel drive four days ago and haven’t taken it out since.  The difference between rear wheel drive, front wheel drive, and 4 wheel drive is like the difference between night and day with 4 wheel drive being much, much, better than front or rear wheel drive.  And the heavily griptioned tires on the Jeep make a big difference too. 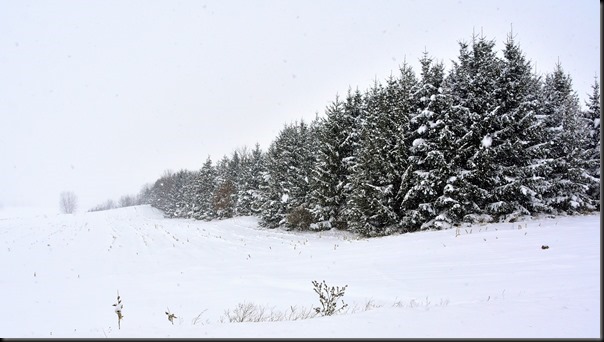 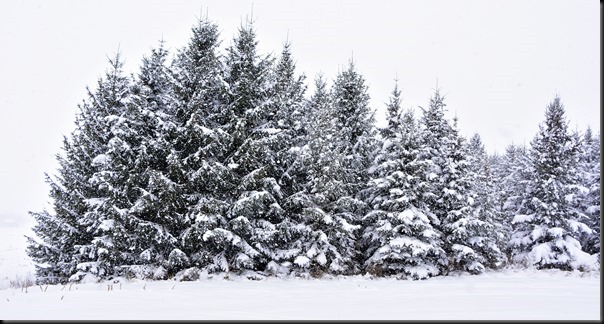 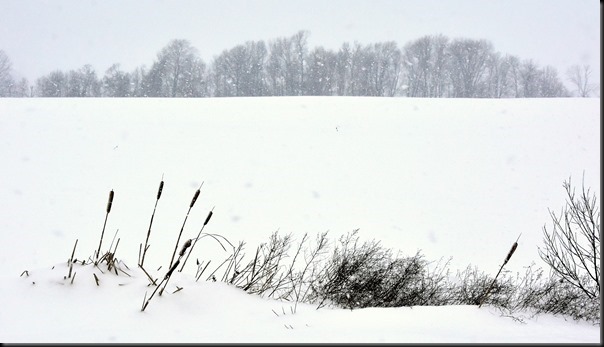 DESPITE THE SNOW AND COLD WORK GOES ON AT THIS NEW BARN (OR HOUSE) CONSTRUCTION OUT IN THE COUNTRY….I THINK THEY’RE POURING CEMENT

We were back home shortly after ten and the snows increased as the day went on with large bands of the white stuff coming in off the lake.  It went on and on and never stopped and I was again outside by 2 p.m. scurrying around with my snow shovel keeping paths, walkways, and parts of the driveway open.  Enough is enough is enough already. 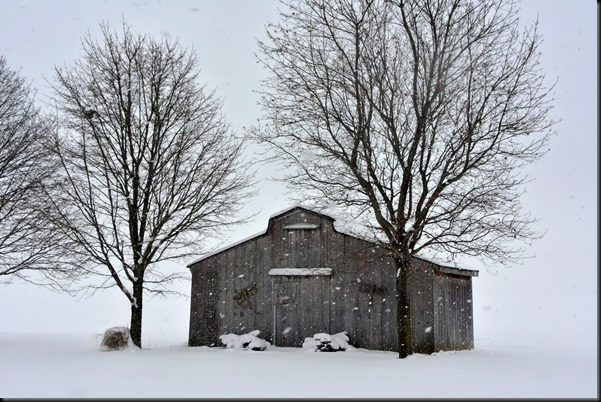 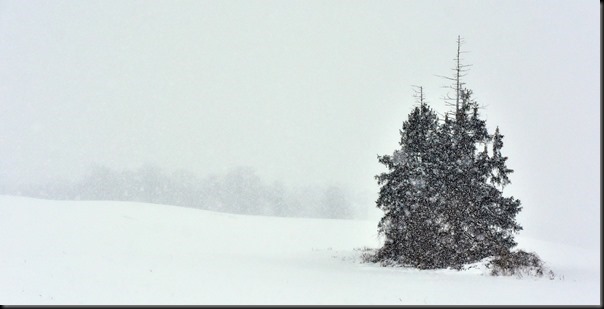 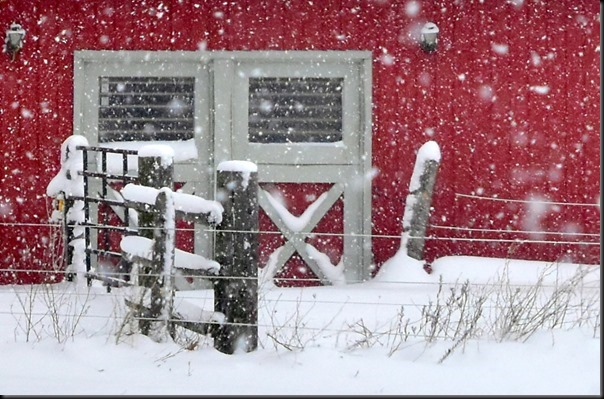 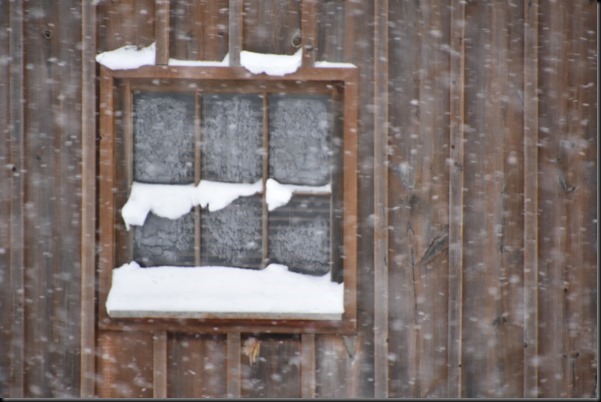 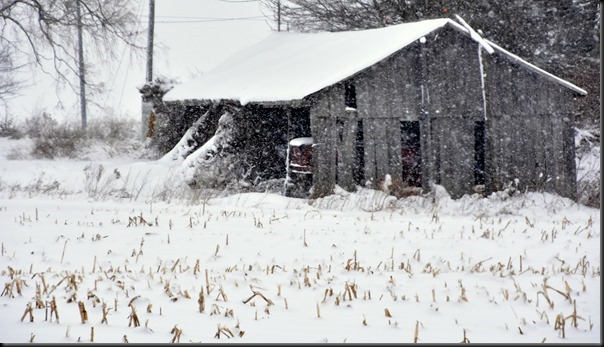 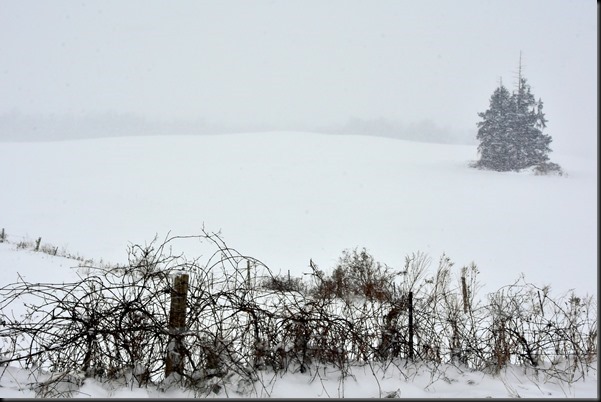 It was late afternoon before we picked up the Motorhome at the Bayfield Garage.  Noticed some snow on the windshield so started up the rig and hit the wiper switch to clear the snow.  What I hadn’t noticed was the windshield wipers frozen to the windshield where some melted snow had run down probably when they had it inside.  There was a ‘pop’ as the wipers broke free of the ice but the passenger side wiper arm was now misaligned and crossed over to the driver’s side windshield.  Luckily a mechanic from the garage was able to come out with a sledge hammer and re-adjust the wiper arm back in place.  Oh, that should have read ‘wrench’ instead of sledge hammer.  Anyway the rig is all checked out and ready to go.  In fact I think it’s more readier to go than we are. 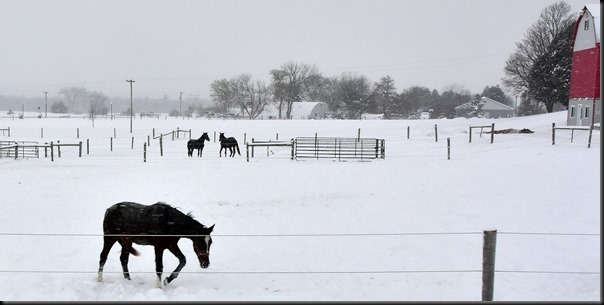 KEEP AN EYE ON THOSE TWO LITTLE FELLERS IN THE BACKGROUND 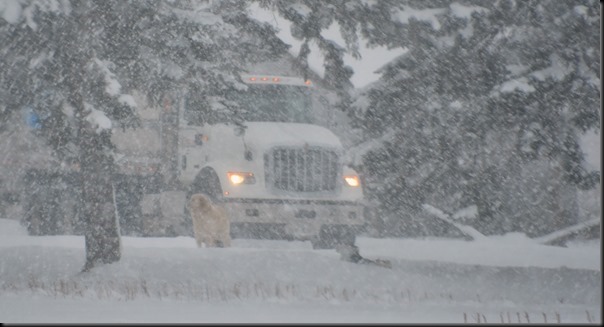 SNOW SQUALLS SOMETIMES WERE A LITTLE HEAVIER THAN OTHER TIMES 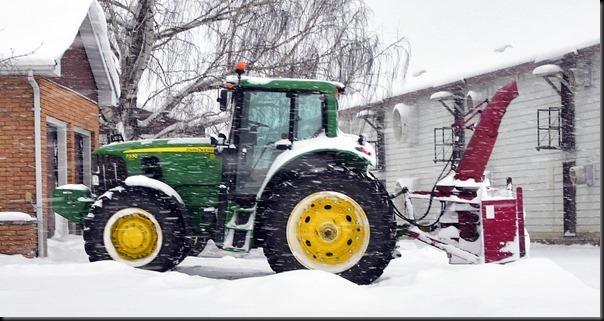 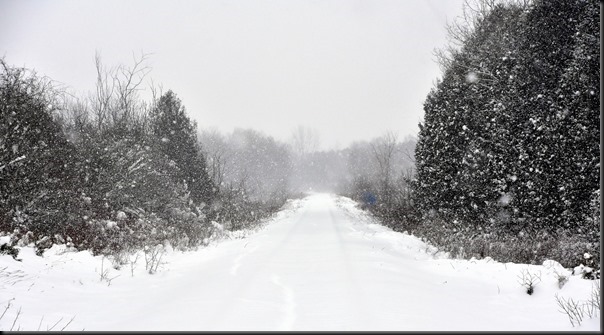 NO THIS ISN’T A COUNTRY ROAD, IT’S A RAILWAY LINE 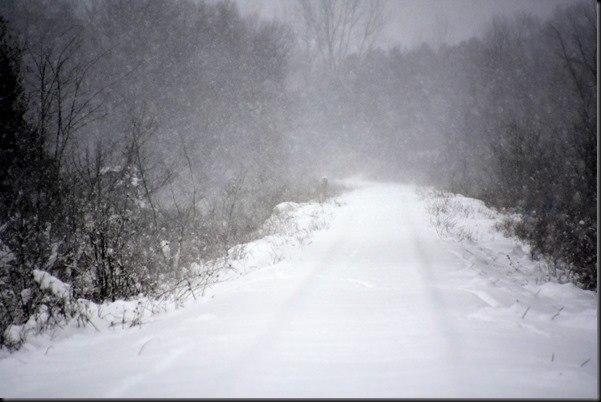 THE REASON FOR THE MAILBOX ON THE LONG HINGED POLE IS TO RAISE IT UP OUT OF THE WAY OF THE SNOWPLOW WHEN IT GOES BY….MAILBOXES ARE HARD FOR SNOWPLOW DRIVERS TO SEE AND CAN EASILY BE KNOCKED OFF 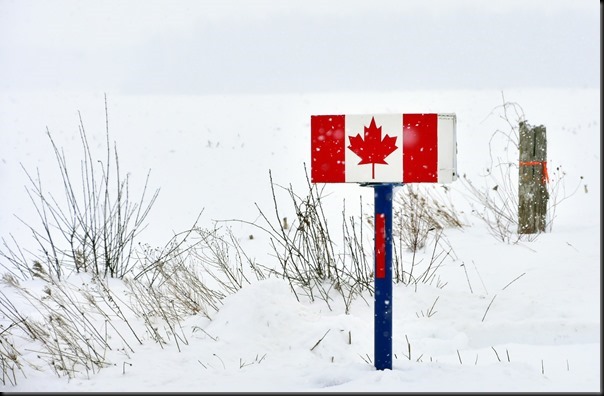 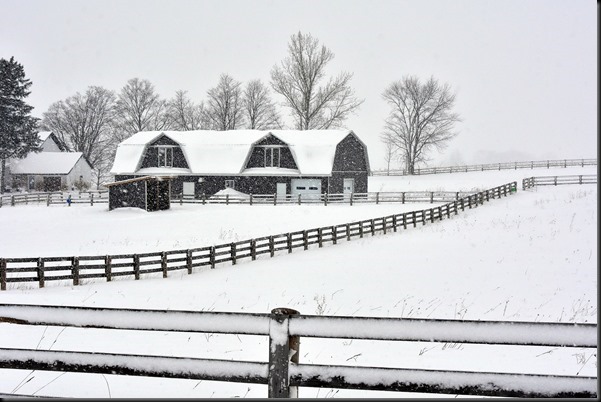 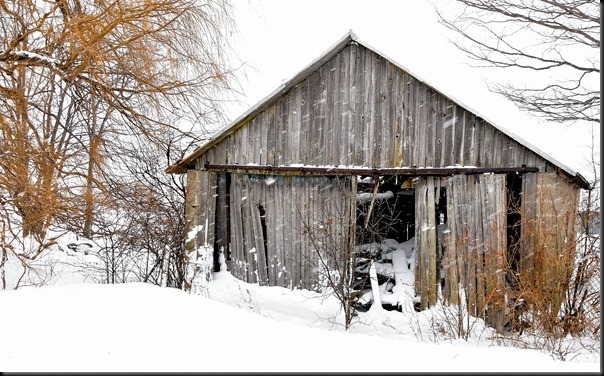 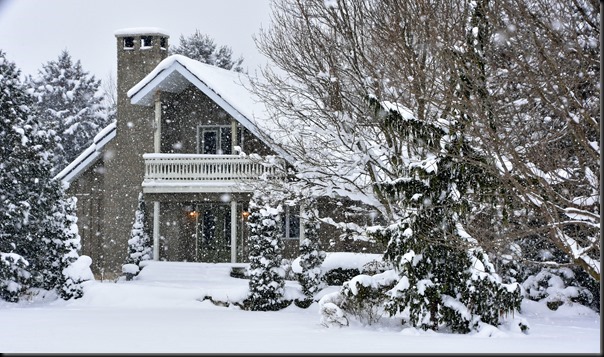 We have a foot or more of snow on top of the Big EEE and I was hoping to take it for a spin today and blow as much of that snow off as I could.  Managed to get some off on the way to the garage this morning but on the way home nothing was blowing off and there is still a pile of snow up there.  With a couple of ‘above freezing’ days coming up starting Sunday night I will now have to get up on the rig’s roof and get that snow off myself before the mild spell.  If it’s left up there and it turns mild the snow will become wet and as soon as it freezes again it will have the consistency of cement.  Not good!!  Years ago that happened to Kelly’s Mom and Dad in their Class A Motorhome.  When they left Spencerport New York just after Christmas that mass of ice and snow on the roof began to melt as they got into warmer air and it wasn’t long chunks of ice began coming off the roof behind them……right through the windshield of their car they were towing.  Yep, I gotta go up there and get that snow off the roof alright sometime in the next couple days.

GROANER'S CORNER:((  A group of Sun City Senior citizens were sitting around talking about their ailments:  "My arms are so weak I can barely hold a cup of coffee", said one.  "Yes, I know. My cataracts are so bad I can't even see my coffee", replied another.  "I can't turn my head because of the arthritis in my neck", said a third, to which several nodded in agreement.  My blood pressure pills make me dizzy," another went on.  "I guess that's the price we pay for getting old," winced an old man as he shook his head.  There was then a short moment of silence.  "Well, it's not that bad" said one woman cheerfully. "Thank God, we can all still drive"!

“The one thing women don’t want to find in their stockings on Christmas morning is their husband.”

In a small Southern town there was a "Nativity Scene" that showed  great skill and talent had gone into creating it. One small feature  bothered me. The three wise men were wearing firemen's helmets.  Totally unable to come up with a reason or explanation, I left.  At a "Quick Stop" on the edge of town, I asked the lady behind the counter about the helmets. She exploded into a rage, yelling at me, "You damn Yankees never do read the Bible!" I assured her that I did, but simply couldn't recall anything about firemen in the Bible. She jerked her Bible from behind the counter and ruffled through some pages, and finally jabbed her finger at a passage. Sticking it in my face she said, "See, it says right here,  'The three wise man came from afar.'" 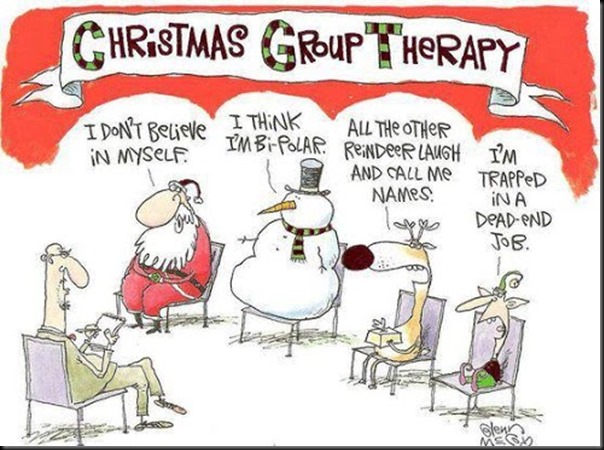