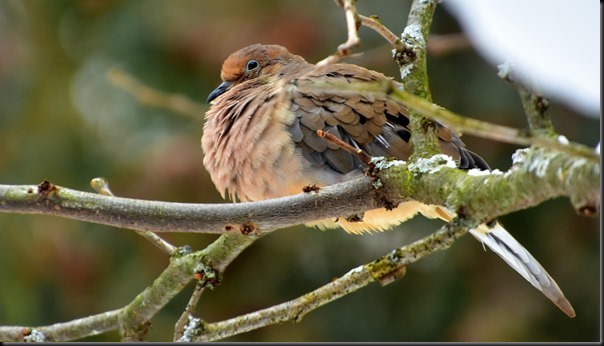 It was hard for me to drum up enough enthusiasm for heading out into yet another cold gray morning peppered with snow flurries but with a 42 pound furry little black dog pushing me out the door I didn’t have much choice.  Cranked up the Jeep’s heater and off we went.  Minutes later we were plowing snow on a paved road that un-expectantly hadn’t been plowed yet.  There were a number of snow drifts on Portal Hill Line as we made our way to Goderich.  Could see tracks through the drifts where another vehicle had made it through so we just stayed in those partially drifted in tracks and plowed ahead without any problems.  Had I been driving Kelly’s Pontiac Sunfire we would have been stuck for sure. 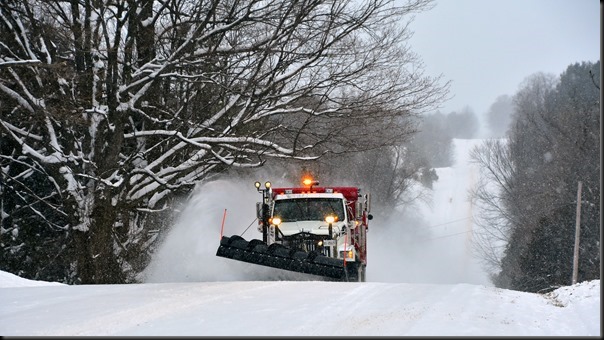 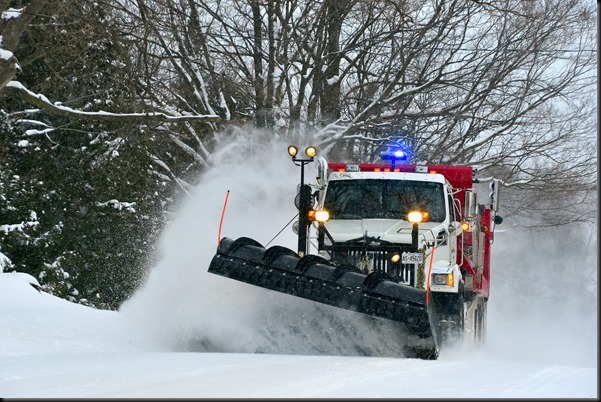 Coffee and a muffin to go at McD’s and we followed our usual route down around the harbor and out to the end of Rotary Cove.  Could see Lake Huron is beginning to freeze along the shoreline.  It’s not unusual for lake waters to freeze for as far out as one can see.  Great columns and mounds of ice and snow build up along the shoreline and it can be quite a sight.  Even large chunks of blue ice at times. 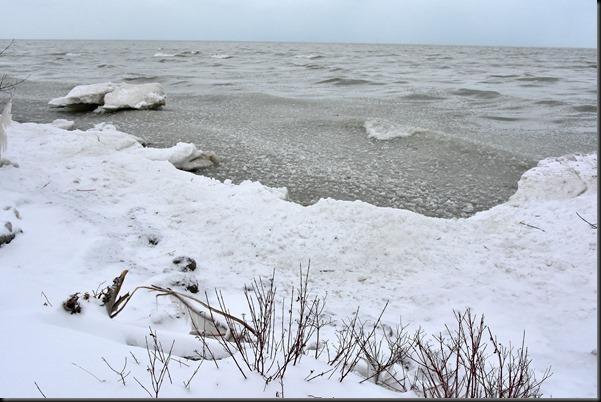 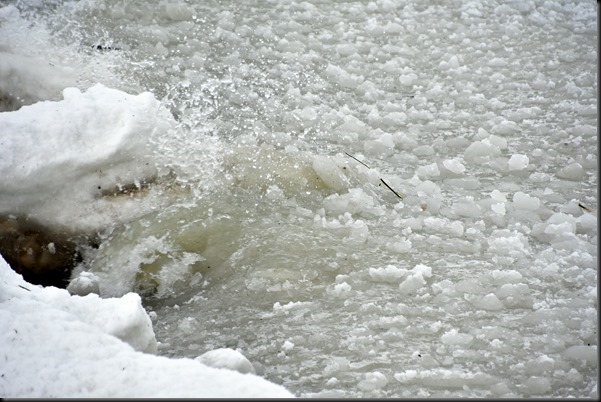 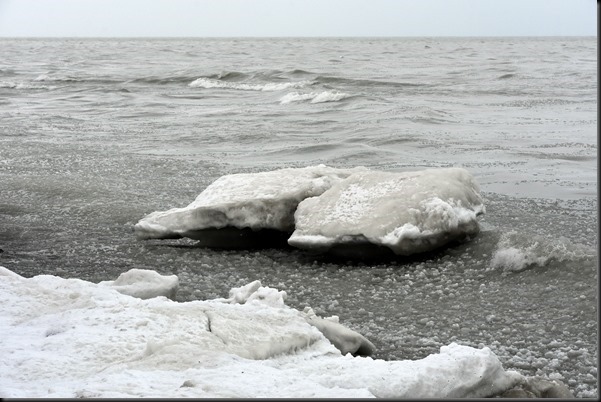 ICE IS ALREADY BUILDING UP ON A COUPLE OF ROCKS 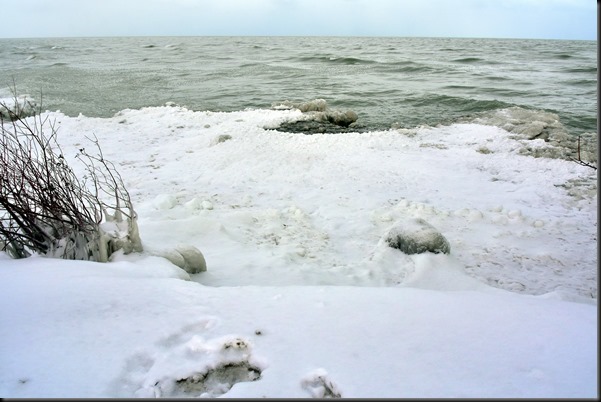 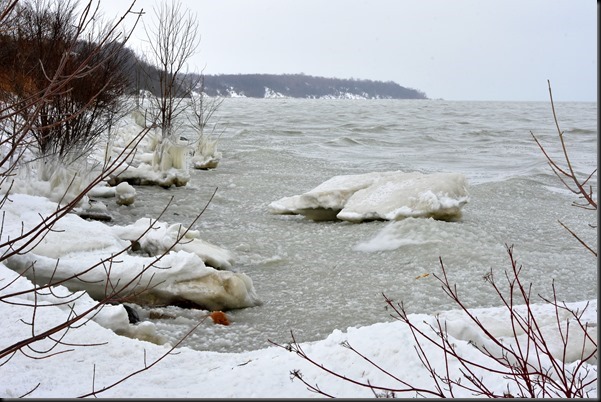 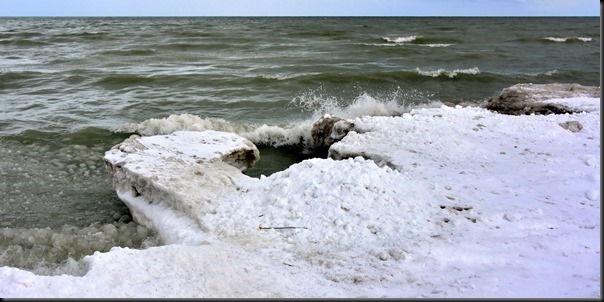 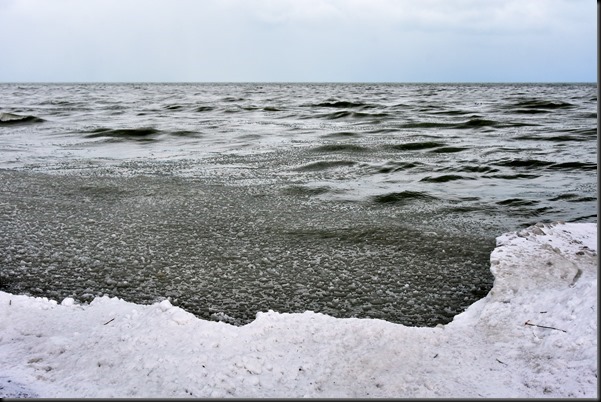 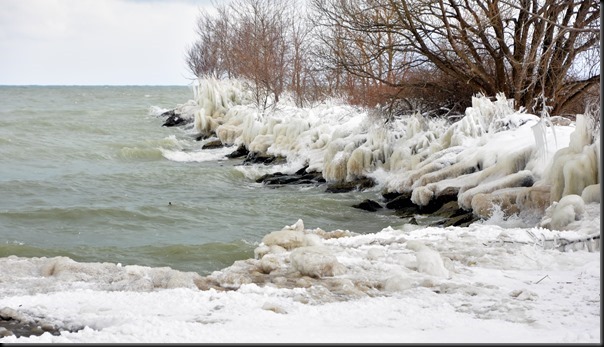 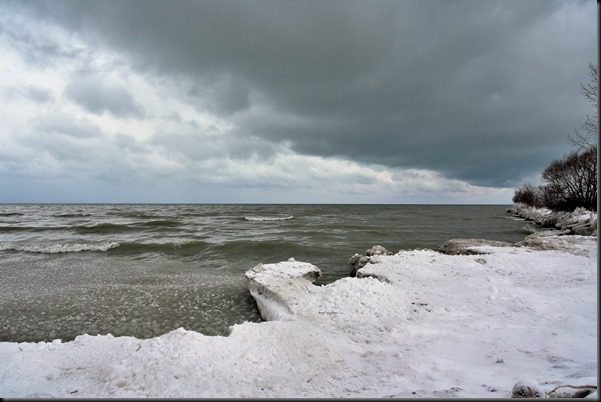 Knowing I had a few things to do at home I didn’t bother taking the long way back so we just headed home the same way we had come.  Thought maybe we could have another go at those snowy drifts on Portal Hill Line but alas they were all gone.  Snowplow got em!! 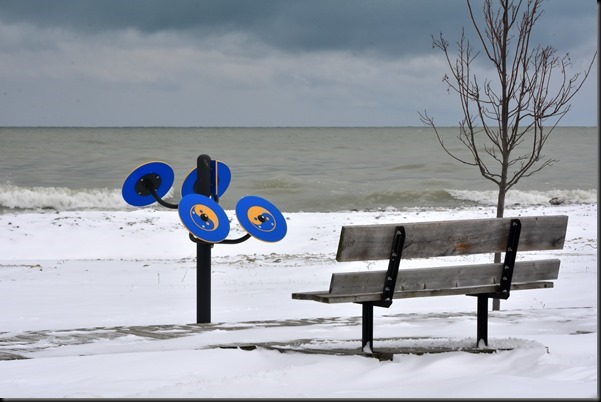 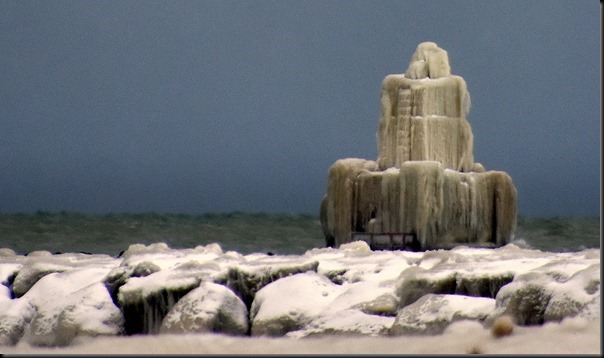 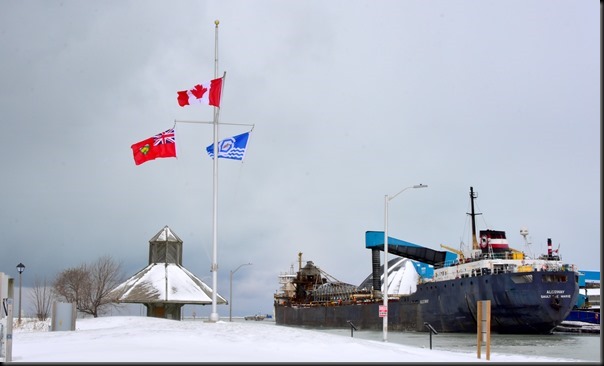 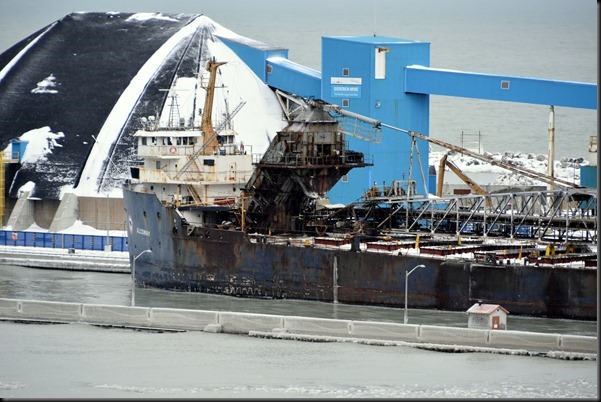 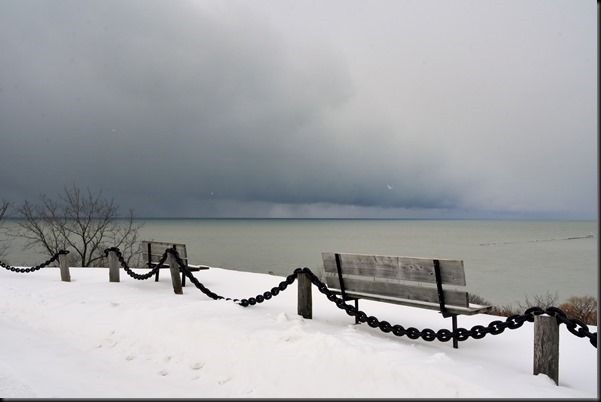 UP ON THE BLUFFS NEAR THE LIGHT HOUSE OVERLOOKING LAKE HURON 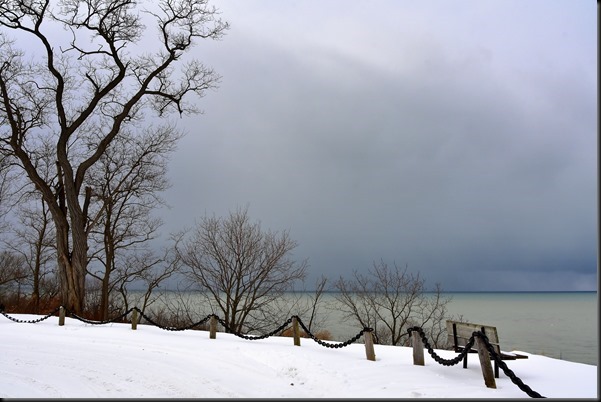 Figured it was as good a time as any to try getting all that snow of the roof of the Motorhome so gathering together a long handled squeegee scraper and my 12 foot step ladder I got right at the task at hand.  The snow didn’t come off quite as easily as I had hoped and I was the best part of an hour climbing up and down the ladder and reaching out with the extended squeegee pole pulling snow off the roof.  Impossible to get it all off without climbing up onto the roof but I didn’t want to especially do that knowing how treacherously slippery it would be up there. 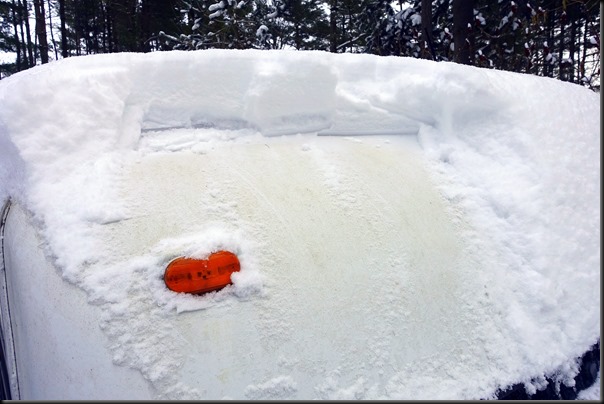 I STARTED AT THE FRONT OF THE COACH 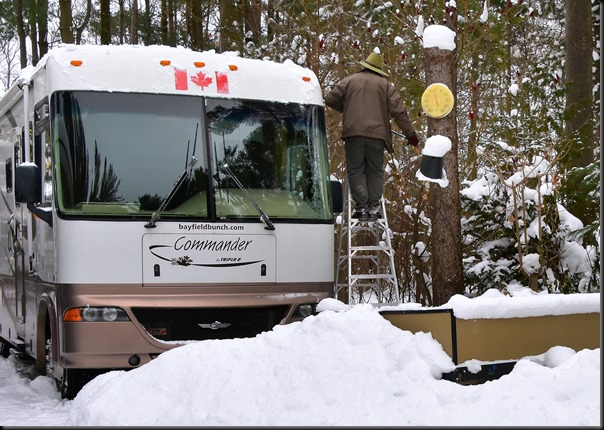 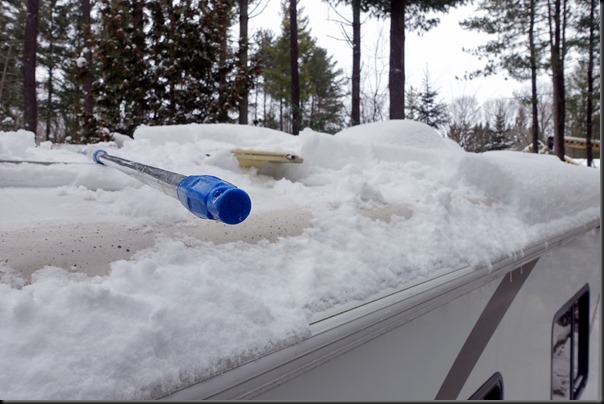 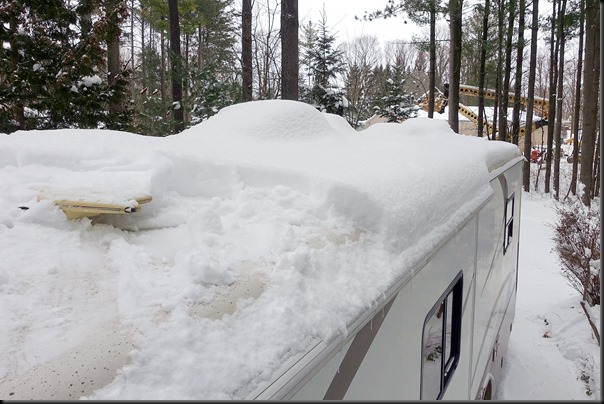 I probably removed about 60% of the snow load with a pole before deciding to take the rig for a spin to try to blow the remainder off.  So that’s what I did and was able to blow off another 25% or so.  Got the rig up to 75mph and looking in my rear side view mirror I could see a solid wall of white snow chasing me.  Only problem was by the time I got home the Motorhome was totally encrusted in that damn miserable corrosive road salt and there was still about 20% of the snow left on the roof.  No way to wash the salt off of course but if the temperatures go above freezing Monday and Tuesday I’ll maybe carry out about a hundred and forty two and a half buckets of water and try to splash that salt off best I can. 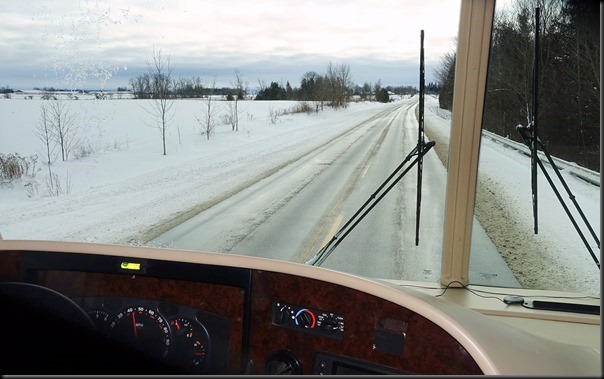 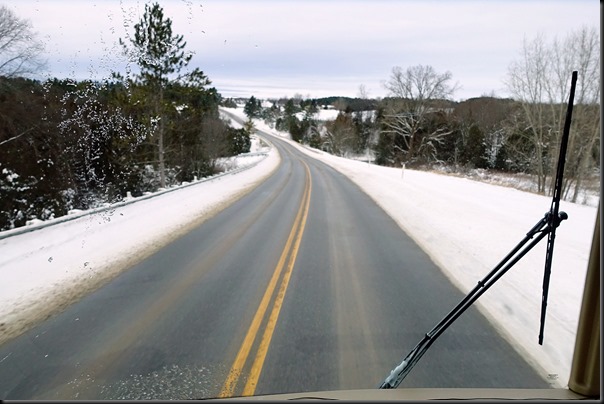 Kelly’s down with a cold and temporarily out of action.  If her cold persists we may have to move our departure date back.  We’ll just take it one day at a time this week and see how things go.  If her cold gets worse we may just not be going anywhere.  Also, it looks like some really bad weather shaping up along the corridor we plan to travel and right at the same time we plan or should I say had planned to travel it. Thanks to Chris and Caron for sending us this Winter Travel Advisory.  I have a feeling we won’t be going anywhere a week from today, our planned departure date.  And to think we were usually on the road by October 21rst most years and by now would have already been soaking up that great Arizona and California sunshine for nearly two months already. 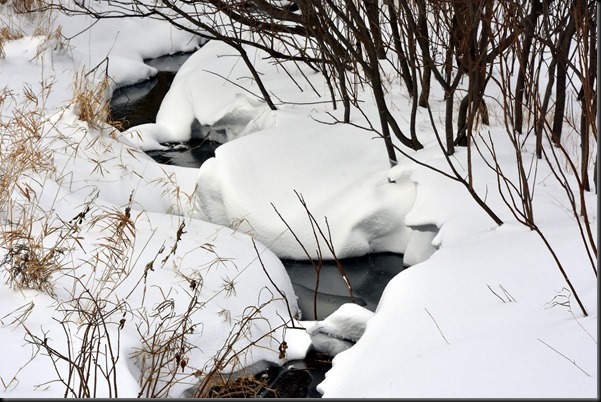 GROANER’S CORNER:((  A man and an ostrich walk into a restaurant. The waitress asks, "What will it be?"  The man replied "a burger and a coke." "And you?" "I'll have the same," the ostrich replies. They finish their meal and pay. "That will be $4.50," The man reached into his pocket and pulled out the exact amount. They do this every day till Fri.   "The usual?" she asked. "No, today is Friday. I'll have steak and a coke."
"Me too." says the ostrich. They finish and pay. "That will be $10.95"  The man reached in and pulls out the exact amount again just like all week.  The waitress was dumb-founded. "How is it that you always have the exact amount?"
"Well," says the man. "I was cleaning my attic and I found a dusty lamp. I rubbed it and a genie appeared." Wow!" said the waitress. "What did you wish for?"  "I asked that when I needed to pay for something, the exact amount would appear in my pocket." "Amazing! Most people would ask for a million dollars. But what's with the ostrich?" "Well," said the man. "I also asked for a chick with long legs."

- There are two kinds of people who don't say much: those who are quiet and those who talk a lot.

- Since light travels faster than sound, isn't that why some people appear bright until you hear them speak?

Q: Diner: I can't eat this chicken. Call the manager.
A: Waiter: It's no use. He can't eat it either.
Q: What do you get when you cross a parrot with a centipede?
A: A walkie-talkie, of course.
Q: Why don't they play poker in the jungle?
A: Too many cheetahs.
Q: What is the difference between a cat and a comma?
A: One has the paws before the claws and the other has the clause before the pause.