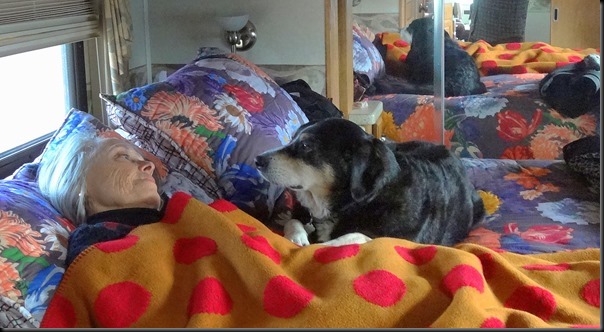 We are still quite aways away from any warm weather as this cold front hangs heavy over this whole area.  We dropped to 27 in Forest City Arkansas last night and it looks like that trend will continue.  Warmest weather ahead we see is Tucson Arizona and beyond.

A quiet night in the Walmart parking lot with another Class A beside us and Super B off to our left.  We had the big wheels rolling by 7:10 this morning with a rather decent looking sunrise to the east.  At the risk of being repetitive I can tell you once again about the light traffic and absence of continuous big trucks heading west on I-40.  Very little traffic and we could have drove the southern bi-pass route around Little Rock Arkansas blindfolded.  We have done this bi-pass well over half a dozen times coming and going in the past years and have never had any trouble.  We’ve even done it in the early morning rush hour darkness and survived.  But just barely.

AND THIS ‘LITTLE ROCK ARKANSAS’ SKYLINE IS FOR YOU JANNA AND TAKEN WITH THE D5000 I MAY ADD:))

About 9:45 we pulled into a Rest Area situated between the east and west lanes of I-40 west of Little Rock.  Kelly fixed us up some soup and coffee.  We haven’t made one McDonalds stop on this trip yet.  We’re doin good.  Of course had Cracker Barrel been open on Christmas Day in Texarkana we probably would have stopped in tor breakfast.  It was a favorite stop of ours years ago:)) 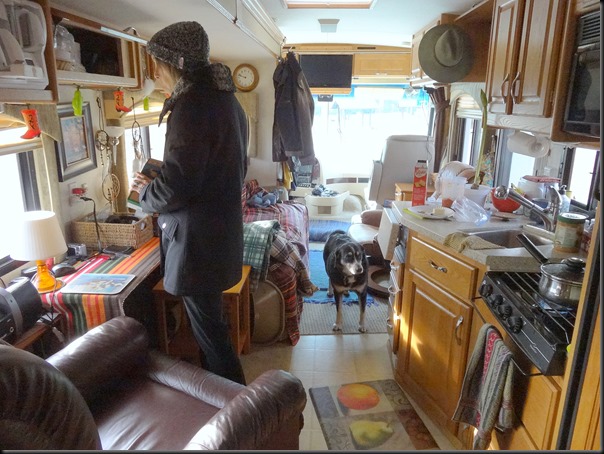 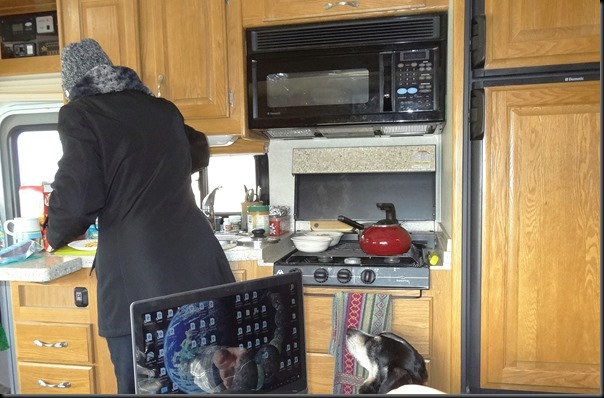 Rolled out of the Rest Area about 10:30 and continued heading West.  A great driving day with bare roads and diffused sunlight.  No complaints darnit……well Okay except for the cold temperatures still upon us.  We rolled right on through Texarkana at high noon. 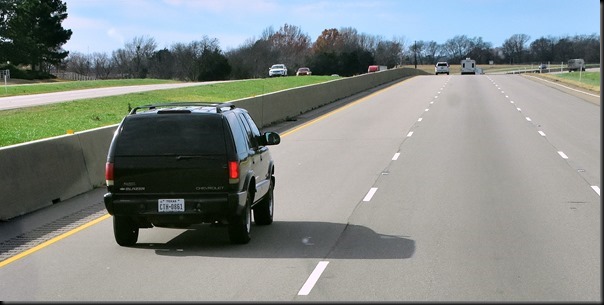 It was somewhere around Mount Pleasant in Texas on I-30 we pulled into our second Rest Area of the day.  We had a decision to decide upon.  Do we make a full frontal assault on Dallas or do we make an end run north around Dallas like we usually do.  Seeing’s how it was Christmas Day and the traffic was already light I figured all the Dallasites would be in their homes eating big Christmas dinners and the roads would have much less traffic on them.   Ya right!! Despite knowing it would likely add another 3 hours driving time to our day we decided to go for it anyway so off we went heading straight into Dallas/Fort Worth.  Well I don’t think most of those Dallas folks stayed home to eat turkey today:(( 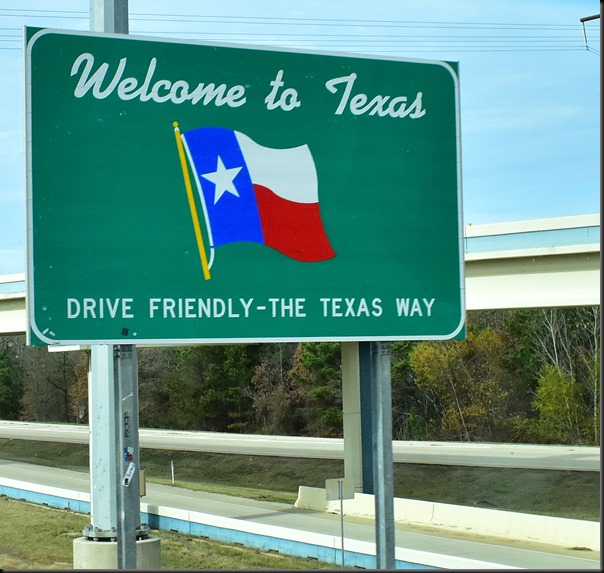 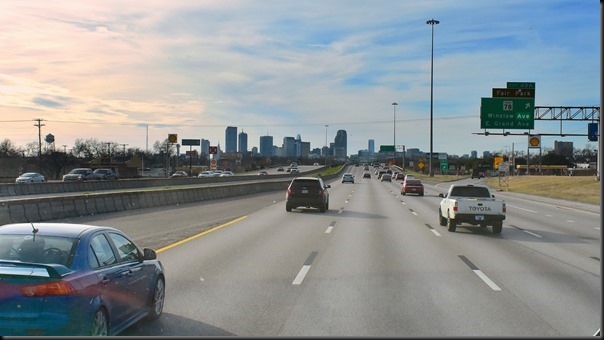 Kelly had programmed our Garmin GPS and also had Google maps up and running.  Having taken the southern bi-pass route coming the other way one time years ago we figured we would do the same route again so we barreled head long into the east side of Dallas…..and then I don’t know where we went.  Our old Garmin GPS and the newer Google Maps began disagreeing with each other  as to which way was the best way to go right of the bat so of course confusion reigned supreme and we had to start winging it trying to follow the overhead signs.  We were soon locked into the 65-70 mph soupy vehicle morass and the traffic was way heavier than I had expected.  We saw downtown Dallas skyscrapers far ahead on the horizon and twenty minutes later they were flying right by us  on our right hand side.   We had somehow obviously missed the bi-pass cut-off.   We had no choice but to stay with the speeding traffic flow being careful not to get swept off any exit ramps to oblivion.  We had no idea where we were except after a bit I noticed I had the sun on my left shoulder and that told me we were heading west so we just kept on going and going.  Traffic eased off after we passed the Dallas skyscrapers and I thought great, that’s it for Dallas.  But then I saw more skyscrapers ahead and traffic picked up a bit.  Damn, we were heading right for Fort Worth.  Luckily the majority of Fort Worth folks had stayed home today so it wasn’t nearly as bad getting through there but by the time we put Fort Worth in the rear view mirror we were both exasperatedly exhausted . 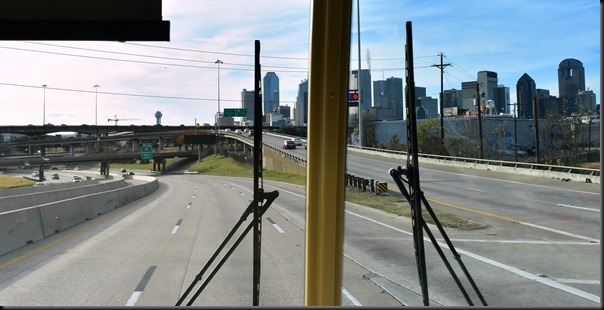 It wasn’t until later tonight when I sat down with my Benchmark Atlas and had a good look at Dallas that I realized that yes indeed we had missed the southern Dallas bi-pass and rocketed right through downtown Dallas on I-30.  Kelly thought it all went pretty smooth but of course she wasn’t driving. But hey, we didn’t have to blast our horn at anybody and nobody had to blast their horn at us so I guess all in all we did Okay for ourselves. 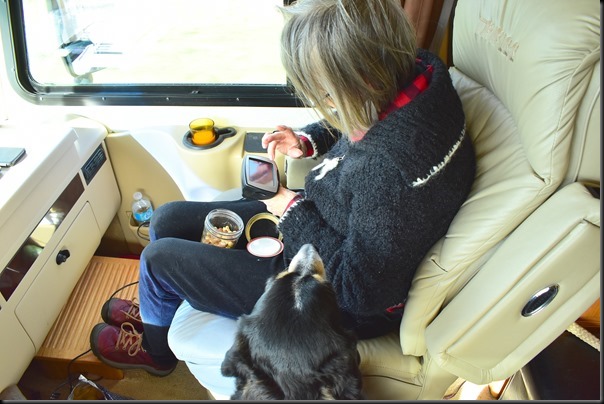 NOT SURE WHAT KIND OF JET THIS IS

Kelly determined there were a couple Walmart’s ahead in a place called Weatherford Texas on I-20 so that is where we headed for and that’s where we are for the night.  With today being a holiday we pretty much have the whole Walmart parking lot to ourselves.  Post is later tonight because I fell asleep in my chair earlier while putting it together.  I have no idea where we’ll be tomorrow night………………….

GROANER’S CORNER:(( Kathy began a job as an elementary school counselor and she was eager to help.  One day, during recess, Kathy noticed a young girl standing by herself on one side of the playing field while the rest of the kids were playing a game of soccer.  A while later, Kathy walked over to the young girl and offered, "Would you like me to be your friend?"  The girl looked at Kathy suspiciously, then said hesitantly, "Okay, I guess so..."  "Why are you standing here all alone?" asked Kathy. "Because," the little girl said with great exasperation, "I'm the goalie!"

“What do you call it when cafe customers joke about their coffee? A brewhaha.”