WE STARTED OUR DAY OFF WITH A COLD WET SNOWY MORNING

When out with Pheebs at 4:45 a.m. the weather did not look very promising.  An hour later looking up through one of our skylights Kelly said', ‘I think it’s snowing.’  Lifting the window blind beside my chair I was able to confirm she was correct.  With temperatures hovering at 32 degrees it was 7:30 when we rolled out of the Home Depot parking lot and up onto I-69 heading south.  Twenty minutes later we blew through Fort Wayne Indiana in a cloud of wet snow.  Highways were wet and salted but there were slippery spots.

Snow flurries picked up north of Indianapolis and about 9:45 we began merging with big city traffic but luckily it was Saturday morning and light.  Indianapolis generally chews us up and spits us out and this morning was no exception when we missed a westbound ramp and ended up touring past Indy’s downtown skyscrapers.  That’s the second time this has happend to us and despite some choice words coming from the driver’s seat we made it through Okay and headed west out of town on I-70.

MAKING OUR WAY WEST THROUGH THE CENTER OF INDIANAPOLIS THIS MORNING

First rest area we came to we barreled in and shut things down for awhile to give our nerves a break.  Kelly rustled up a couple of tuna salad sandwiches and brewed up some coffee.  Still snowing but not as heavy and checking the weather map we could where we would soon be driving out of the winter weather mess we had been in all morning.  No problem with visibility so after a bit we were on our way again.  Traffic was still on the light side and the absence of many trucks was a welcome break compared to the norm.  Our destination today was Effingham Illinois and south a few miles to a little place called Watson. 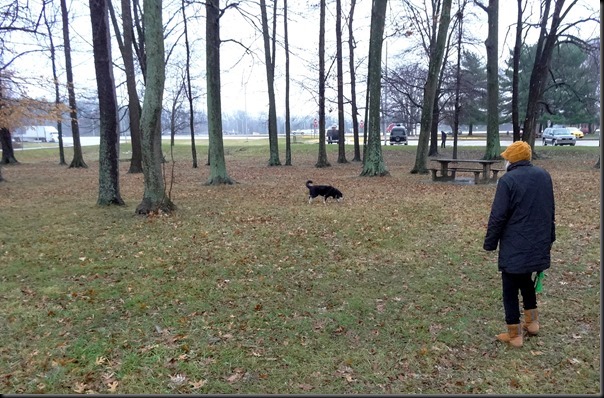 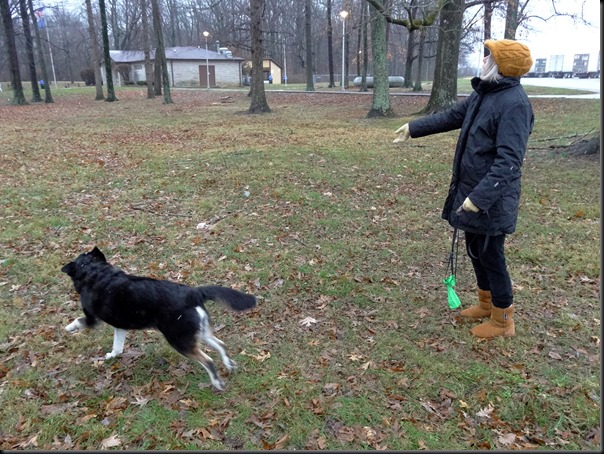 KELLY THROWS A STICK FOR PHEEBS 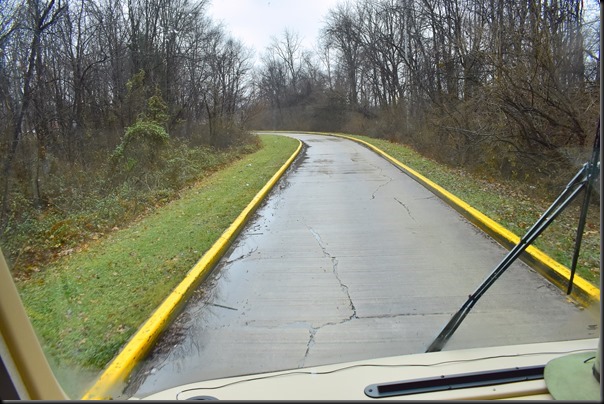 I wrote the above 3 paragraphs at the Rest Stop we were at.  Minutes after we left there the snow stopped and another 5 miles down the road I was surprised to see the pavement totally dry.  Skies brightened up and we actually had the first of a couple dozen sun splashes all the way to just south of Effingham where this post is coming to you from tonight.

SKIES ARE BRIGHTENING AHEAD 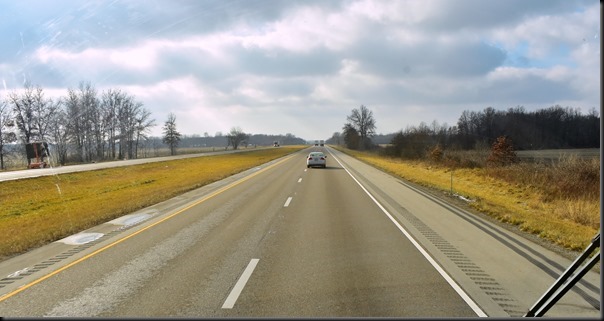 ‘OMG’ LOOK CLOSELY ON THE RIGHT HAND SIDE OF THE CAR AHEAD….THERE IS A SLIGHT SHADOW THERE AND WE ALL KNOW WHAT CASTS SHADOWS IN THE DAYTIME DON’T WE:)))))) 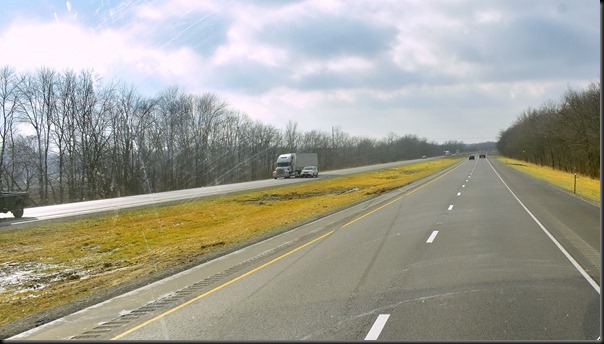 About 9 miles south of Effingham on highway 45 there is place we first overnighted at on our way back to Canada in late winter of 2007.  It’s called the Percival Airpark and it’s just south of Watson Illinois.  There is a small RV Park here as well as a Cafe only open certain hours and days.  Twenty-five dollars a night with full service.  Gravel parking with surrounding grass.  Reason we stopped here was to load up our fresh water tank and fire up the rig’s water heater.  In other words, to de-winterize the Motorhome.  We sure missed our ‘hot water’ needs for a couple days.  Can’t say our de-winterization went smoothly but never mind, we’re good to go now.  This was the first time we had to deal with this winterization stuff since February of 2007. 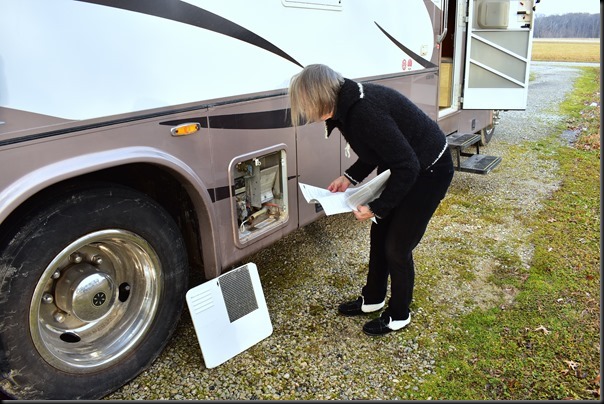 Aside from some very messy winter driving today, our Indianapolis ker-fuffle, and our de-wintering fiasco I’d say we did Okay with everything considered but there was a time when we couldn’t get our water heater going I was about ready to charter one of the airplanes here to fly me home whereupon I would have had my friend Richard strap me into my recliner and not let me out of the house ever again. 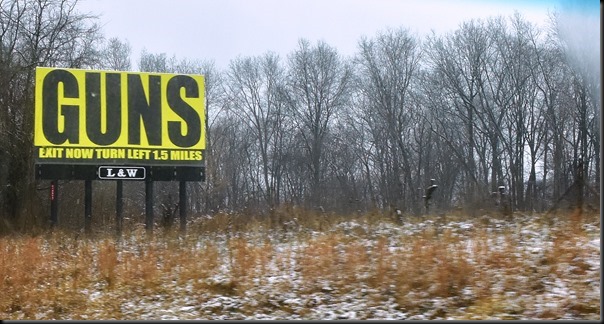 At the time of posting this tonight temperatures are dropping but no snow is predicted and roadways should be bare and dry tomorrow.  And visibility is good with a high light cloud cover.  Weather map shows no storms ahead of us for Sunday so basically we’ll simply be trying to stay ahead of the massive cold front coming down this way from the frozen North.  With a bit of, or a whole lot of luck we just might bounce off the west side of Memphis Tennessee and ricochet off in the direction of Little Rock Arkansas.  Well that may or may not happen so we’ll just have to wait and see how it goes.  And thanks to all the folks for their well wishes on our travels.  We have crossed the first of several time zones so my posts will be appearing at different times now and I noticed Google Analytics has determined ‘Travel With The Bayfield Bunch has turned over the 6 million page views mark.  Now how the heck did that happen anyway……………………………. 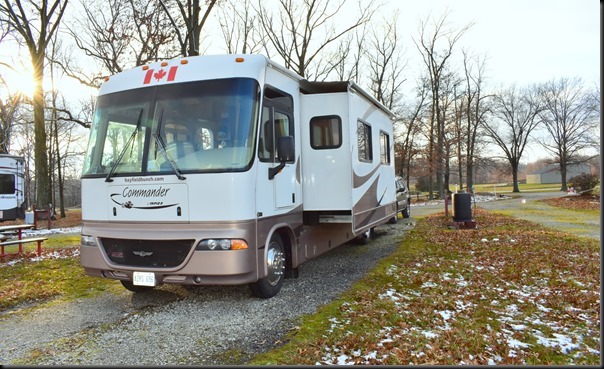