STILL CAUGHT UP IN A WEB OF INDECISION

As much as I hate washing windows, washing windows is what I did today.  Well at least the gray foggy ones I simply got tired of trying to look through.  I figure the more dirtier a window gets the greater the instant ‘see-thru- reward one has when it’s all sparkly clean.  Well that’s my poor excuse anyway. 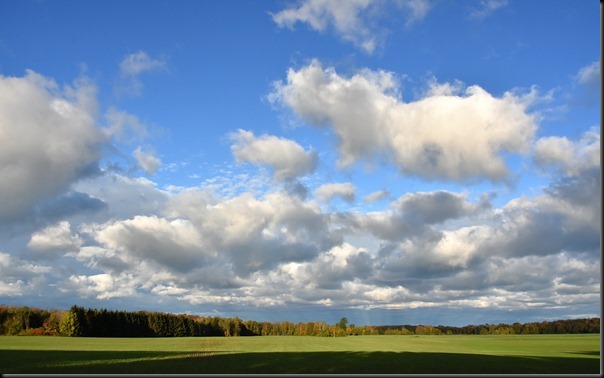 WE HEAR ABOUT BIG TEXAS, MONTANA, AND ARIZONA SKIES SO HOW ABOUT A FEW BIG OLD ONTARIO SKIES 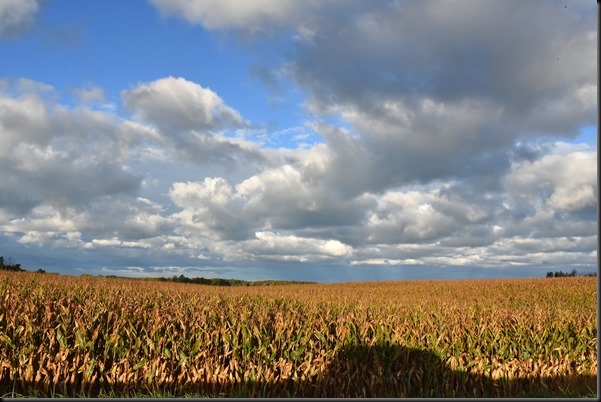 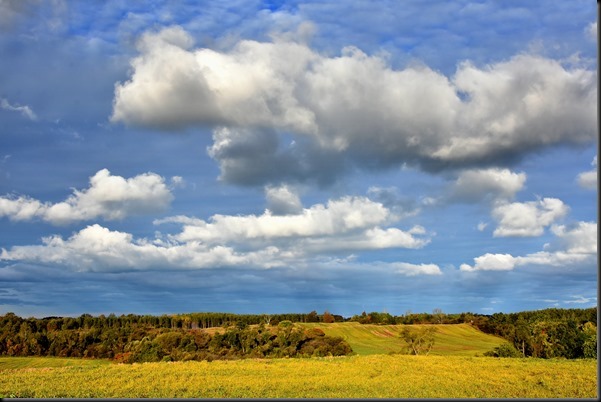 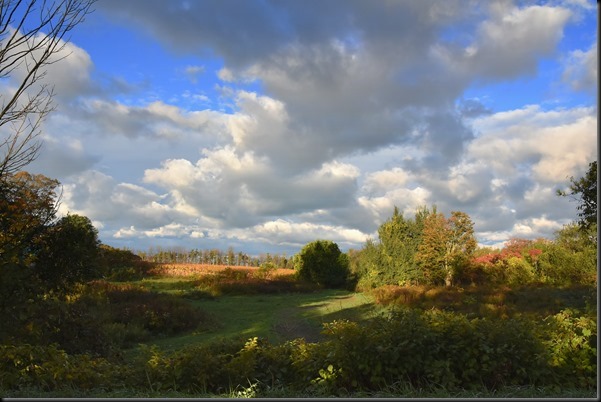 More rain in the night but it was under gradual clearing skies Pheebs and I headed out with each passing hour becoming clearer than the hour before.  Standing on the shores of Lake Huron this morning it was an icy blast of wind coming down the lake from the frigid North.  We didn’t linger at Goderich’s Rotary Cove doggy walking area very long and were soon back into the Jeep with the heater going and Pheebs window down of course.  It wasn’t a long drive in the sunny country side we took though.  I just could not seem to get myself into my normal beautiful countryside mode this morning.  Maybe it was the early morning cold air reminding me of Winter.  So home we came.  Think we got up into the low 50’s today. 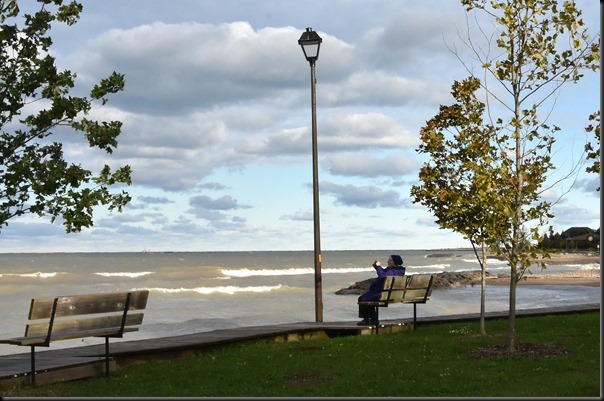 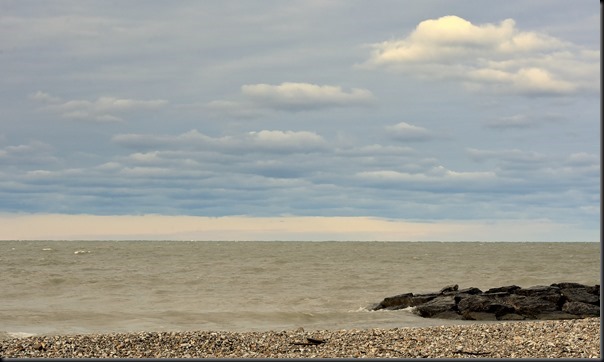 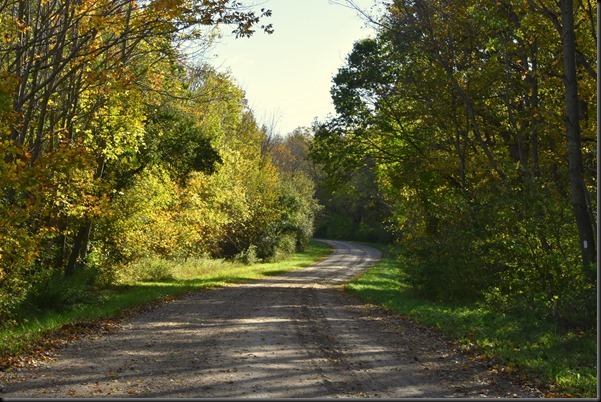 SPOTTED A FEW COLORFUL TREES IN AN OLD GRAVEL PIT 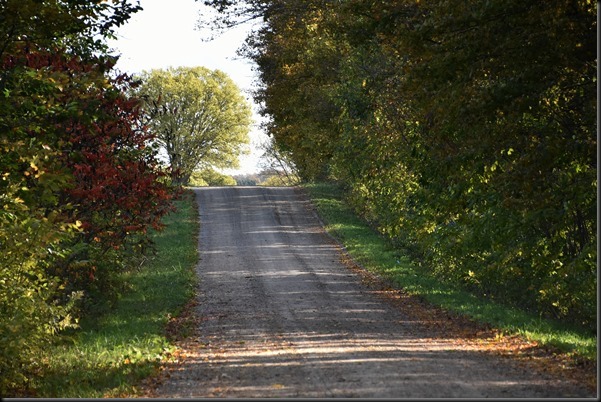 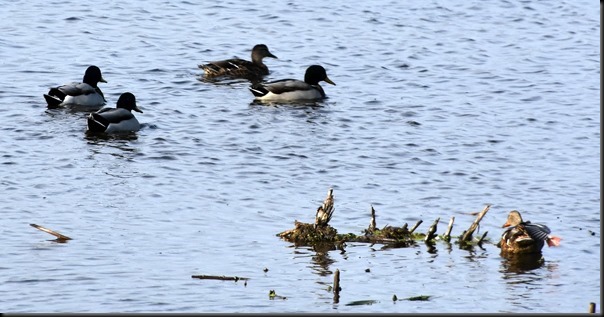 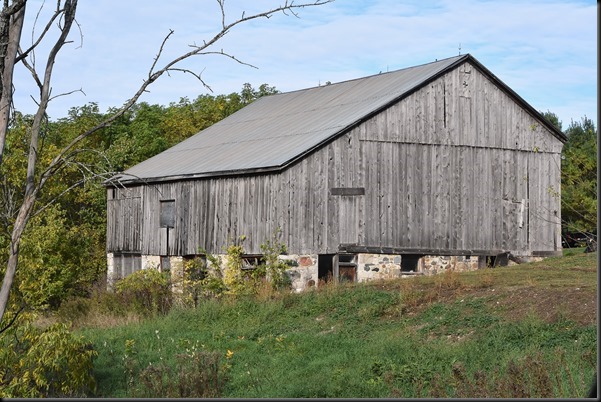 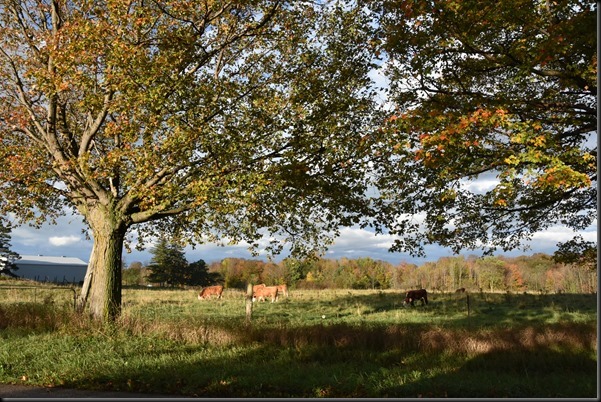 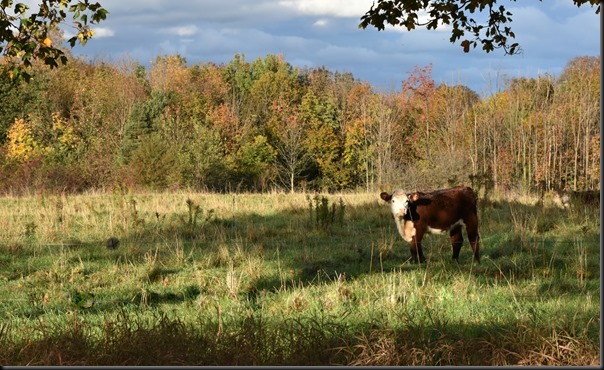 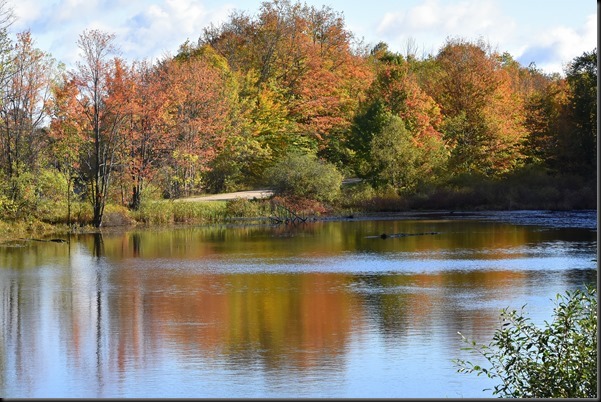 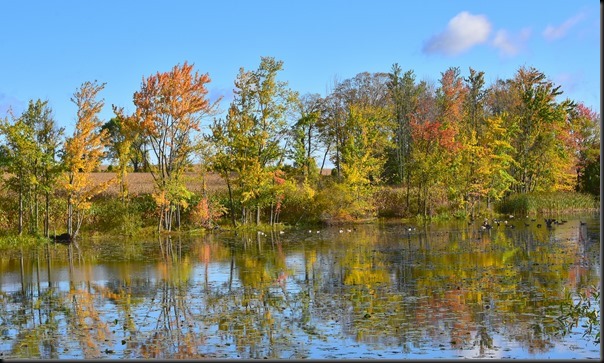 No phone calls by noon so Kelly called her London Doctor’s office again and at least this time she got hold of the Doctor’s secretary who was able to enlighten us a bit about what’s going on.  We already knew that Kelly’s doctor had submitted her scans to a Tumor Board and that board met last week.  Secretary said the Doctor does not have the report from the Tumor Board yet and until he does there is no point in him calling.  So we are not much further ahead today than we were a week ago today.  We have no choice but to sit tight and await the Doctor’s phone call maybe tomorrow, maybe a couple weeks.  Until that time everything is kinda on hold for us.  Hey, it’s Canada eh……………… 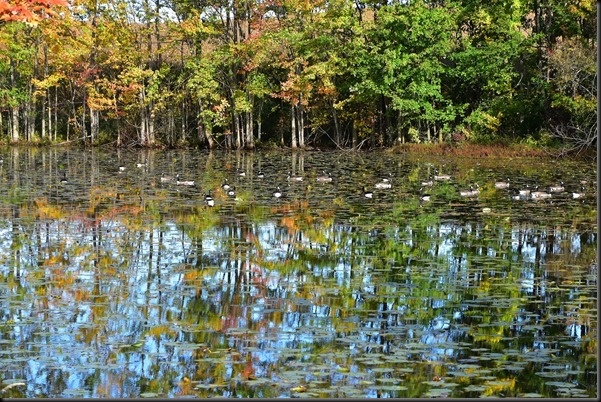 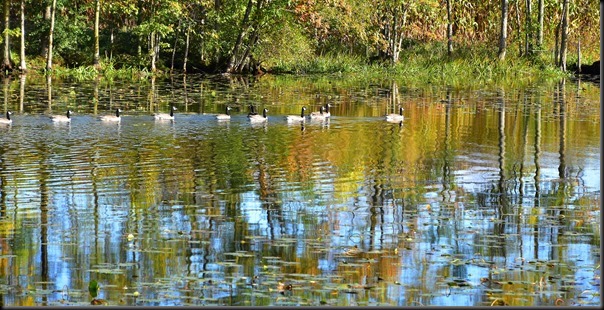 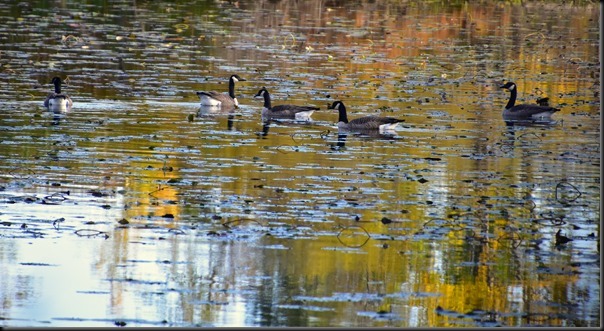 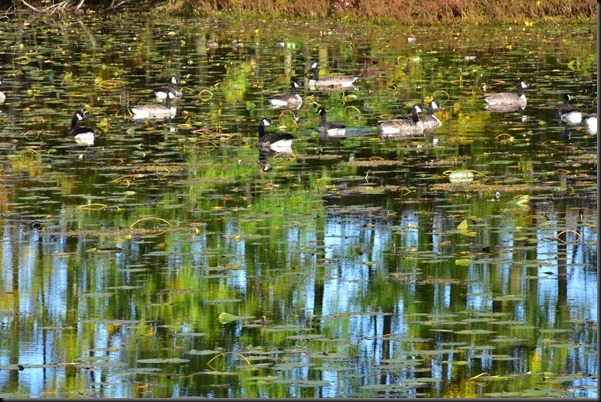 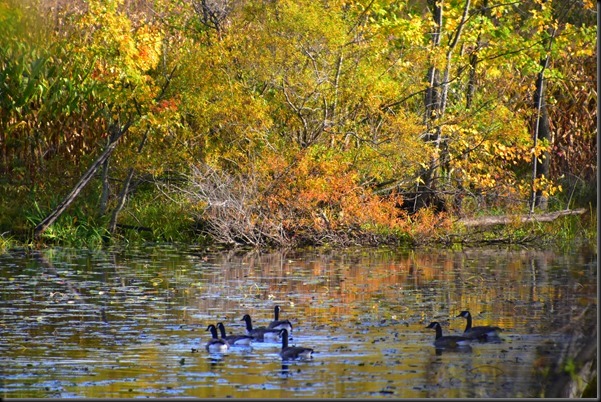 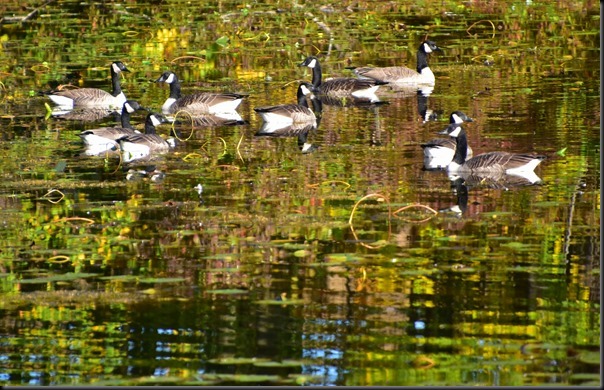 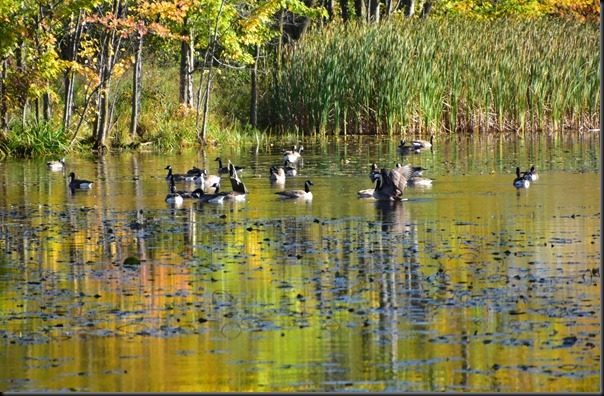 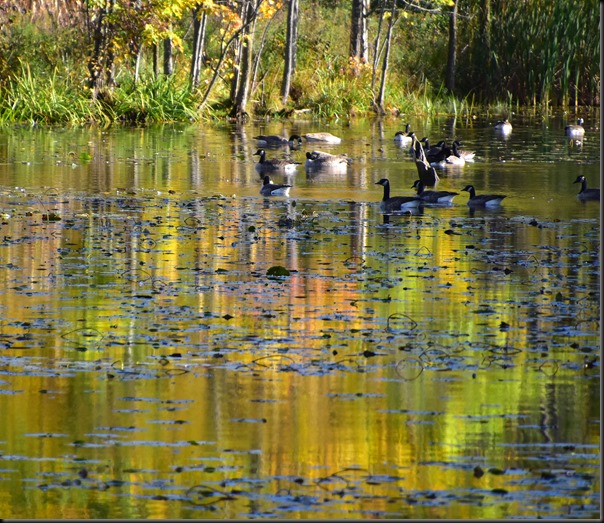 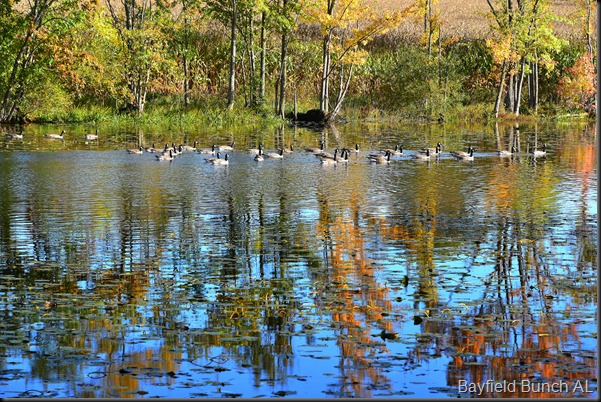 It’s funny how this indecision has disorganized me.  I’ve got two busy lists of things to do with one being a ‘staying home’ list and the other a ‘going away’ list.  Although these two lists do overlap in a few areas I cannot seem to get myself focused or interested as to where to start.  My enthusiasm level for either seems to be in the dumper and I figure that is my mind working away to protect itself from disappointment.  Also in there overshadowing everything is my overall concern for Kelly’s health.  I haven’t been in this exact situation before and these are uncharted waters for me.  Unlike the past eleven years at this time I am not bustling about with my usual energized excitement and straining impatience to get the big wheels rolling South.  Yes, things are definitely different this year……………………. 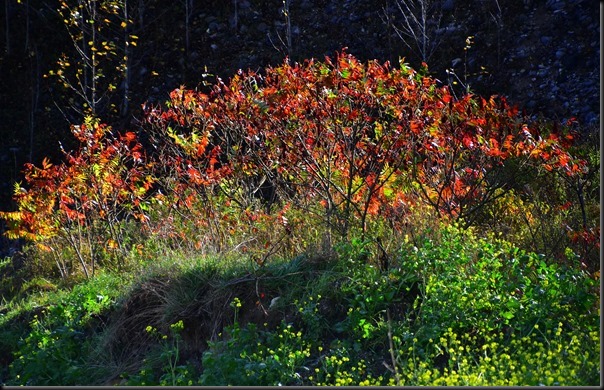 GROANER’S CORNER:((  Two young men were out in the woods on a camping trip, when the came upon this great trout brook. They stayed there all day, enjoying the fishing, which was super.  At the end of the day, knowing that they would be graduating from college soon, they vowed that they would meet, in twenty years, at the same place and renew the experience.
Twenty years later, they met and traveled to a spot near where they had been years before. They walked into the woods and before long came upon a brook. One of the men said to the other, "This is the place!".  The other replied, "No, it's not!".  The first man said, "Yes, I do recognize the clover growing on the bank on the other side.
To which the other man replied, "Silly, you can't tell a brook by it's clover."

Knock Knock
Who's there?
Alaska!
Alaska who?
"Alaska to open the door again."