Rains again came in the night and stayed to nearly noon.  Undaunted, Pheebs and I struck out for Goderich anyway sticking to paved roads.  Those country roads looked pretty soupy when we went by them.  I had hoped the rains would let up but alas they didn’t so after grabbing a coffee and muffin we swung down around both sides of the harbor then plotted a course for home.  We did see one Lake Freighter heading out of the harbor with a load of salt on board.  Watched the Manitowoc set course for the horizon and watched as it slowly faded away into Saturday mornings misty rain.

Being the keen weather person I am I could tell from the clouds it was going to be an all day rain so I adjusted my mood accordingly.  Twenty minutes after pulling into our driveway at home the Sun popped out.  Ten minutes after that I was on the end of my long scrub brush washing down the sides of the Motorhome and not a drop of rain fell for the rest of the day as skies cleared and temperatures soared to over 75F.  If you ever have any questions about our weather don’t be afraid to ask me Okay……… 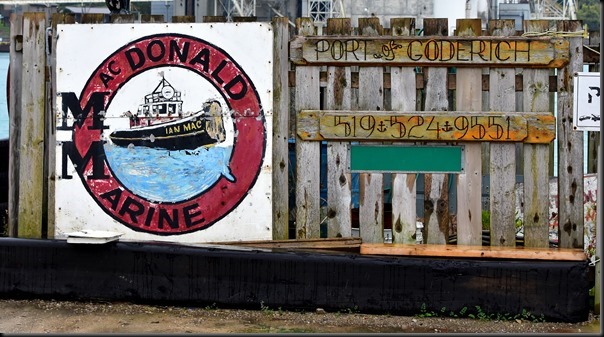 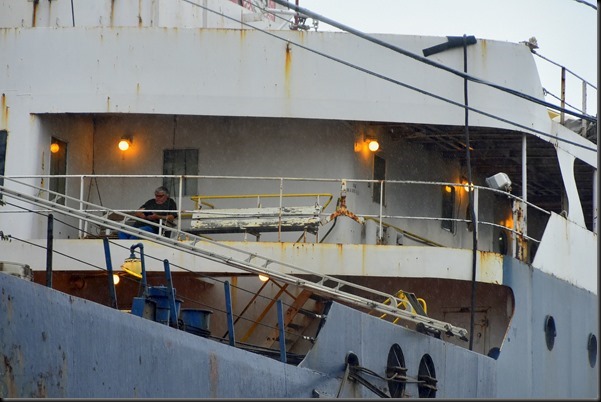 THE LAKE FREIGHER ALGORAIL HAS BEEN DRY-DOCKED IN A CORNER OF THE GODERICH HARBOR FOR ABOUT A YEAR NOW WITH NARY A SOUL ON BOARD….WELL THAT IS UNTIL I  EDITED THIS PHOTO AND HAPPENED TO NOTICE SOMETHING LEFT OF CENTER THAT I DID NOT SEE WHEN I TOOK THE PHOTO

It’s Thanksgiving Week-end here in Canada and at our house Kelly whooped us guys up a big yummy turkey dinner today with all the fix-ins.  Choice of two pies too, apple or pumpkin.  I prefer both.  House smelled marvelous all afternoon.  I’m not much of a big eater anymore but I sure over-stuffed myself as if there were no tomorrow.  But hey, it was my 73rd birthday today and Kelly said I was allowed to do that…………:)) 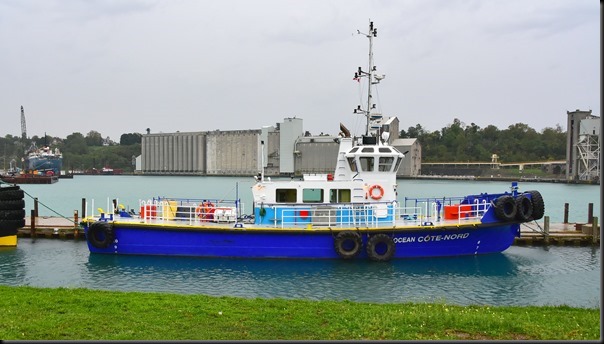 GROANER’S CORNER:(( "The Jewish people have observed their 5758th year as a people," the Hebrew teacher informed his class. "Consider that the Chinese have observed only their 4695th. What does this mean to you?" After a reflective pause, one student volunteered, "Well, for one thing, the Jewish people had to do without Chinese food for 1063 years."

Officer to driver going the wrong way up a one way street. "And where do you think you are going?"
Driver: - "I'm not sure, but I must be late because everyone else is coming back."

Knock Knock
Who's there?
You!
You who?
Did you call?